Desired Sudan: a new point of confrontation between Russia and the United States 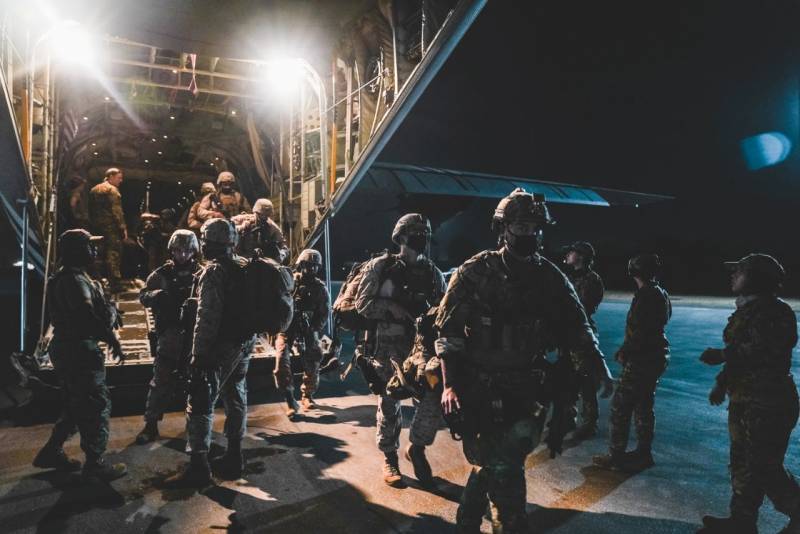 The US African Command Marines are likely to be deployed in Sudan soon. Photo source: africom.mil

I think that Russia's plans to build an MTO point in distant Sudan are no secret to anyone. The idea is certainly beautiful - the opportunity to have a small overseas base in the Red Sea, which would perfectly complement our Syrian "acquisition" in the waters of the Mediterranean ...

Brilliant plans that seem to be on the brink of a foul.

In the minds of the layman, Africa is some kind of distant, uninteresting to the whole world place of deserts, stuffy jungles, myriads of insects and hungry locals who sent down their heavenly punishment for abandoning colonial existence. Such a view, of course, can take place, but it is absolutely far from the real state of affairs.

One could talk indefinitely about China, France, Turkey, Great Britain and other players in this field, but for us at the current moment of time, only one is important - the United States of America.

Unfortunately for Russia, it just so happens that the United States does not want to see a Russian base in the Red Sea. And besides this, they need to deploy a new operations center on the African continent. Any action by Moscow in foreign policy is always met with tough opposition, and Sudan is no exception.

In September 2020, the first official statements about the Russian MTO point appeared. In November, the president signed an executive order. And already in December, the US military and diplomats launched an "invasion of Sudan" - and, admittedly, very effectively.

It's worth starting with the fact that since 1993 Sudan has been on the American list of states sponsoring terrorism: the country's government was accused of involvement in terrorist attacks at the US embassies in Kenya and Tanzania in 1998, and was also credited with supporting the Lebanese Hezbollah (banned in the Russian Federation) and the Palestinian group "Islamic Jihad" (banned in the Russian Federation).

Relations began to change after the ouster of President Omar al-Bashir in April 2019. The new government abandoned the policy pursued by the previous leader and embarked on a course of improving relations with Washington: Sudan agreed to pay $ 335 million to relatives of victims of the 1998 terrorist attacks, and in December 2020 (what a coincidence!) The White House removed the country from the list of states sponsoring terrorism ...

This, alas, was only the first step of the Americans - the first, but far from the only one.

Then events begin to unfold more and more rapidly - special envoy Donald Booth arrives in Sudan. The diplomat expresses his support for the current transitional government, and in the subsequent negotiations with Prime Minister Abdullah Hamdok he agrees to provide the country with a bridging loan - it was with his help that Sudan paid off its debt to the World Bank.

Subsequently, Abdullah Hamdock will organize a public appearance to thank the United States of America.

Then there is a new meeting of special envoy Donald Bout with a high-ranking official of the Sudanese leadership - this time with the Minister of Finance and Economic Planning Gabriel Ibrahim.

In this case, they talked about much more serious things than a simple expression of support: the Sudanese minister asked for US assistance in "shaping the investment climate" of the country, and then they discussed the economic requirements for organizing the work of American and European banks in Sudan. 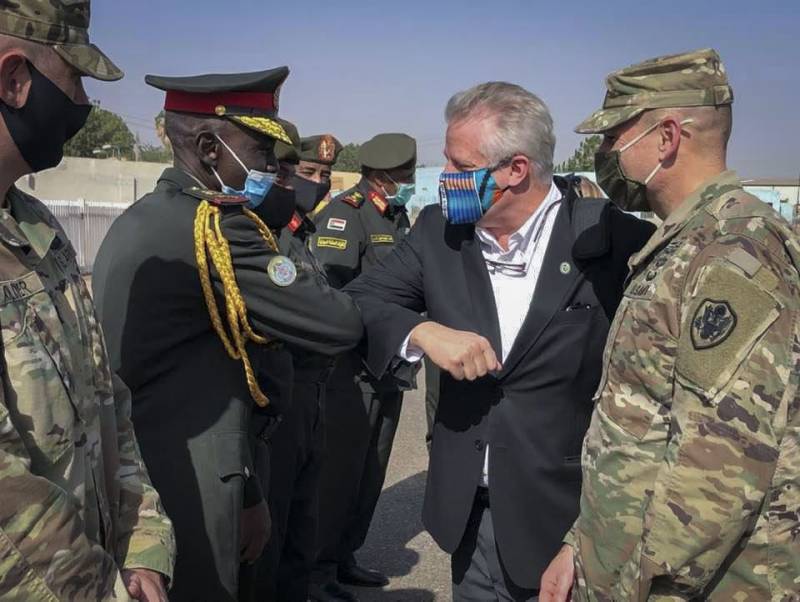 AFRICOM Deputy Commander for Civil-Military Cooperation Andrew Young on his first visit to Sudan. Photo source: africom.mil
Roughly speaking, Donald Booth negotiated the organization of working conditions for large Western capital. The beginning of the process with such a development of events, as it is easy to understand, is not far off - the start has already taken place.

So, on April 3, a World Bank delegation arrived in Khartoum with the aim of allocating two billion dollars to the government of Sudan, most of which will go to agriculture - and, naturally, this money will also be allocated with the participation of American investors.

Additional support for American diplomacy was provided by the Turkish side - the one with which the United States is allegedly in a state of terrible quarrel. On March 30, Turkish Ambassador to Khartoum Irfan Naziroglu issued a statement that in 2020, exports from Sudan to Turkey increased by 28%, reaching $ 105 million. And, according to him, the governments have a plan to increase the volume of foreign trade between the two countries.

In this way, the United States and its allies are forging strong economic ties with the devastated aftermath of the civil war in Sudan, a country in dire need of an influx of finance, investment, and good relations with major players, which no doubt include the United States.

“Sudan expresses its hopes for the development of economic relations with Turkey. Our country can greatly benefit from cooperation with Ankara, which will help us develop our economy, thereby contributing to increased trade ties. "
- Minister of Trade of Sudan Ali Gedo.

At the end of 2020, the Sky News Arabia news agency reported the start of negotiations between Washington and Khartoum on a draft defense and security agreement.

It mentioned the possibility of deploying American troops at Sudanese military installations and ... the construction of a US African Command (AFRICOM) naval base in the Akik Kabir region, which is on the border with Eritrea.

Please pay attention to the dates - in November 2020, Russia and Sudan sign an agreement, and already in December, the States remove the country from the list of states sponsoring terrorism and begin negotiations on the deployment of their military.

Such a reaction at least deserves to be called "operational".

The following month, at the end of January 2021, the Deputy Commander of AFRICOM for Civil-Military Cooperation Andrew Young and the head of the Naval Intelligence Directorate Rear Admiral Heidi Berg paid an official visit to Sudan. They met with the already mentioned Prime Minister Abdullah Hamdok, Defense Minister Yassin Ibrahim and Chief of General Staff Mohammed Osman El-Hussein. 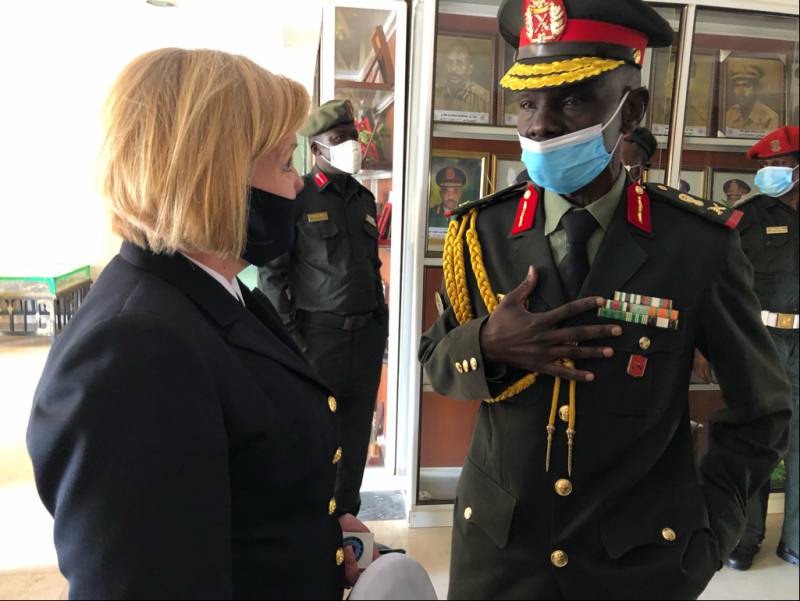 A little later, AFRICOM spokesman Colonel Christopher Karnes said that the United States was ready to help train the Sudanese armed forces, as well as military officials and security forces.

“This is a new beginning and the start of a renewed relationship between the United States and Sudan. This is a journey that we want to take together in order to deepen and expand our relationship. "
- AFRICOM Deputy Commander for Civil-Military Cooperation Andrew Young.

Local media claimed that during the January visit of the AFRICOM delegation, one of the topics of discussion was the refusal to host the Russian facility. The information service of the US African Command, in turn, piquantly bypassed this topic and did not spread about it in any way. 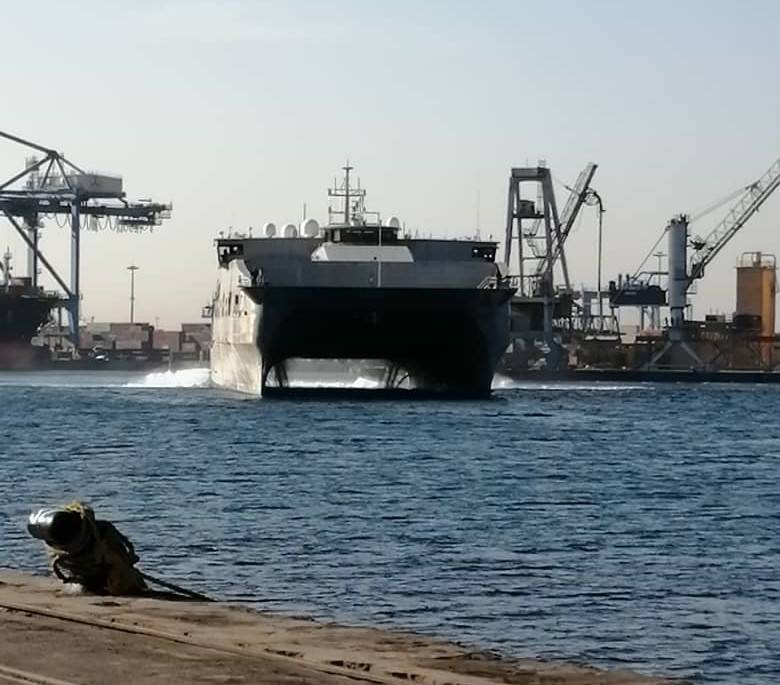 USNS Carson City during a visit to Port Sudan. Photo source: africom.mil
For the first time in decades, a US Navy ship entered a Sudanese port. And the deputy commander of AFRICOM was quick to describe what was happening as nothing more than a fundamental change in relations between Khartoum and Washington. According to Andrew Young, this became possible only thanks to the efforts of the country's new government, which took a course to avoid the bloody legacy of the dictator Omar al-Bashir.

An extremely prosaic hint, isn't it?

The "ship's pick" did not end there - on March 1, 2021, the USS destroyer "Winston S. Churchill" visited the country. His meeting was attended by a solid "personnel": the commander of the Sudanese Navy, Charge d'Affaires of the United States in Khartoum and the American military attaché. 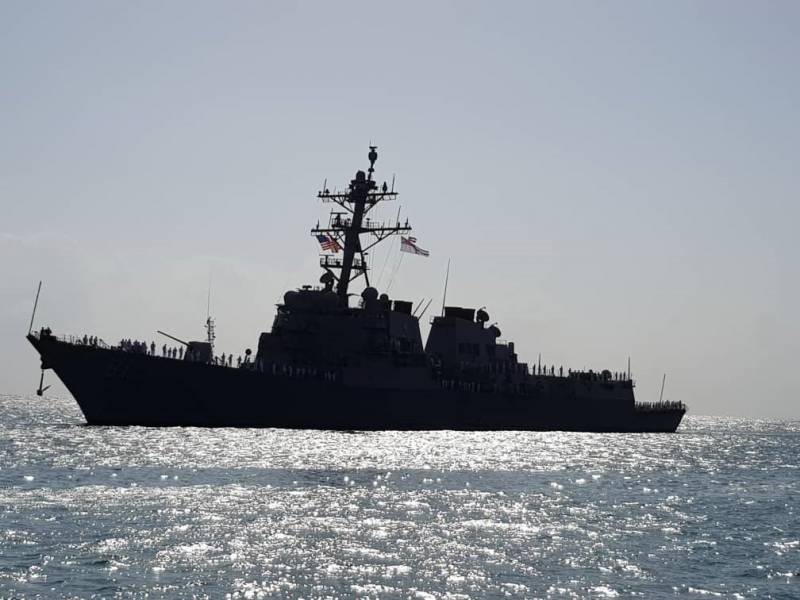 USS "Winston S. Churchill" is located in Port Sudan. Photo source: africom.mil
At the moment it is only officially famous visits and media confirmed milestones of AFRICOM. One has only to guess how many American military specialists, officials, diplomats and intelligence agents are in Sudan. unofficially right now.

Why does the US need Sudan?

In addition to such a prosaic goal as depriving the Russian Federation of an MTO point and cutting off any military capabilities of our country in North Africa, America pursues a number of other, no less important goals.

Quite frankly, impoverished and devastated Sudan offers an excellent opportunity to undermine the economic, political, and military interests of all US adversaries.

Firstly, until 2020, Sudan was a transshipment base for Iran - there was a flow of weapons through the country, which Tehran supplied to the terrorist groups Hezbollah and Islamic Jihad (banned in the Russian Federation). Already now, the Americans can ban the entry of absolutely any ships of the Islamic Republic, completely destroying the supply channel.

Secondly, Sudan has proven uranium reserves of 1,5 million tons. This is a direct blow to Beijing's interests. In 2019, the Sudanese government entered into an agreement with the China National Nuclear Corporation (CNNC) that may soon be in jeopardy.

Third, America needs a new operational center on the African continent - AFRICOM has only a number of small military facilities, which are clearly not enough in the current conditions of the growing Chinese military presence.

Fourth, there is an important economic factor - the United States can become the exclusive supplier of a number of products vital for Sudan: weapons, medical and information technology, construction equipment, etc. Among other things, the country is one of the three African leaders in gold mining, which, of course, can also be a beneficial factor for beneficial cooperation.

So far, of course, it is too early to draw far-reaching conclusions about Khartoum's possible refusal to deploy a Russian logistics center - but it is worth keeping in mind the fact that such a scenario is also possible.

The material you have read, among other things, can be seen as an example of the impact of "soft power". Using the example of Sudan, the Americans are extremely good at demonstrating the effective work of diplomats and military advisers, practically in front of our very eyes, forming levers of economic and political influence in a country that until recently was formally considered hostile.