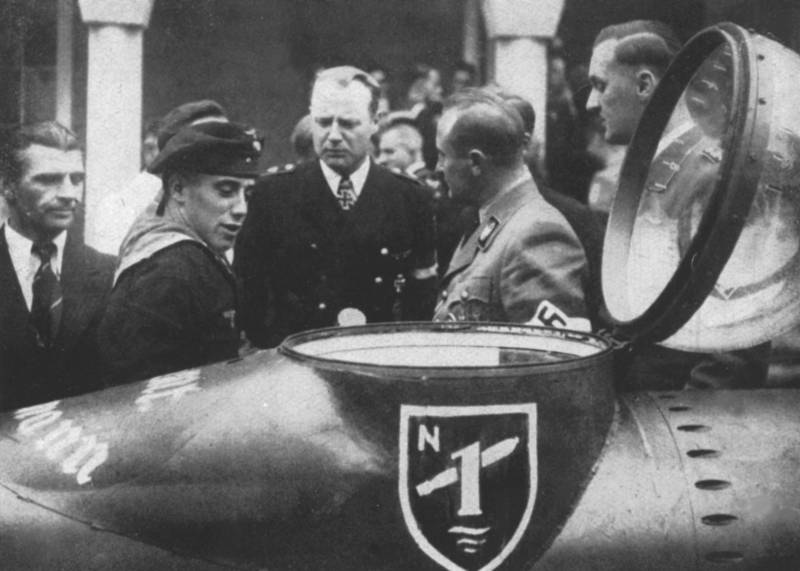 The head of the German youth organization "Hitler Youth" Artur Axman talks with volunteers from the "Hitler Youth" - pilots of human-controlled torpedoes. In the foreground is the "Neger". Photo source: waralbum.ru

“At a time when knowledgeable people already realized that Germany was doomed to war, I had a unique opportunity to participate in the creation of a completely unconventional organization within the structure of the armed forces, in which personal initiative and responsibility were valued more than dependence on superiors and subordination. Military ranks and distinctions, not supported by personal qualities, did not have much significance among us. "
- Vice Admiral Helmut Gueye, Commander of Formation "K".

The strategy of intensifying the conduct of hostilities, conceived by Grand Admiral Doenitz, made itself felt almost immediately after the formation of Formation "K": the newly formed German naval saboteurs received a little more than a couple of weeks to prepare, after which they were thrown into battle.

In the first article of the series (Kriegsmarine combat swimmers: compound "K") we briefly considered history education and basic facts about this unconventional structure of the German armed forces during the Second World War. In this article, we will analyze in detail their "Italian debut".

It is difficult to say whether the rush of the Kriegsmarine leadership was actually justified. The Italians, who have achieved the greatest success in the field of naval sabotage, took several years to solve the technical problems of using human torpedoes ("Mayale") and to train a handful of pilots for this type of weapon. The Germans tried to go this way through short-term intensive practice, but the results were, perhaps, absolutely deplorable.

On the night of April 13, 1944, a whole flotilla "Negerov" arrived in a place called Pratica di Mare, which was located 25 km south of Rome. The size of the compound was quite impressive - for the first combat use, the leadership of the Kriegsmarine allocated as many as 30 human torpedoes. This, however, caused unexpected problems with the selection of pilots - there were more volunteers than the boats themselves. 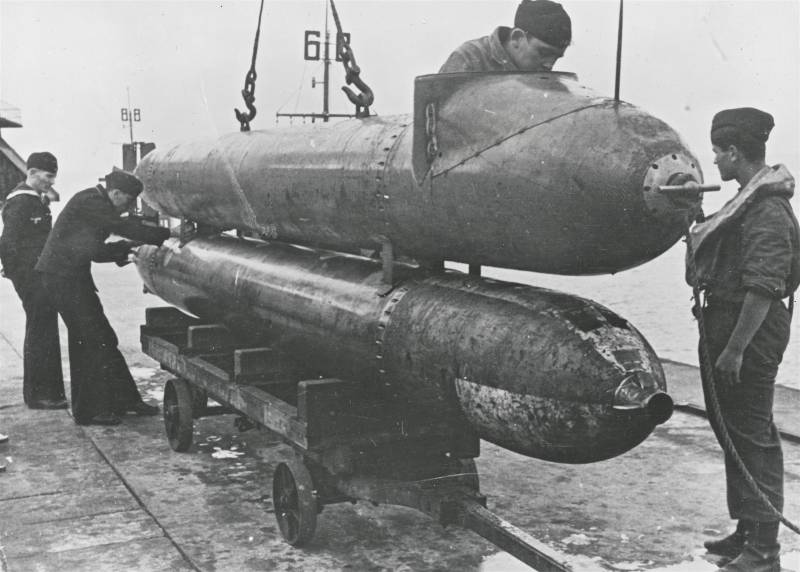 Kriegsmarine technicians prepare the Neger human-guided torpedo for a combat operation. Photo source: waralbum.ru
The transportation of the "Neger" to Italy was carried out in absolute secrecy. Human torpedoes were moved by rail, and then by road, being covered with canvas covers. It is known that the Germans faced a number of difficulties during this event - there were no preliminary exercises for the transportation of this type of weapons, and the soldiers of the "K" formation simply did not have any experience in this matter.

The start of the operation, however, was further complicated by the air supremacy, which by the time of 1944 already had the Allies. In this regard, the "Neger" were placed not directly off the coast, but in a pine grove, which was at some distance from the sea.

The above circumstances imposed their difficulties on the search for a coastal deployment point - the saboteurs could not find a single, even the smallest, bay. Moreover, they did not have cranes or winches with which they could launch the Neger from the unequipped coast to a depth, and they could not find at least some suitable beaches - most of the investigated allowed to go into the sea for 100 m, not losing the bottom underfoot.

However, the Germans, in the end, were lucky: in 29 km from the anchorage of ships in Anzio, which was chosen as an object of attack, near the settlement of Torre Vajanica destroyed by bombs, there was a place where sufficient depth began 20-30 meters from the coast ... The great distance from the target imposed its own difficulties, however, the estimated range of the "Negerov" made it possible to cover the required distance (29 km to Anzio and a little more than 16 km back, to the first line of German trenches).

The first sabotage was planned for the new moon, which falls on the night of April 20-21. Intelligence reported that a convoy of Allied ships embarked on the raid in Anzio - according to known data, the ships usually stayed at anchorage for at least 3-4 days. The weather was favorable, the nights were dark, and the stars were clearly visible in the sky - this allowed the pilots of the "Neger" to have additional landmarks, in addition to wrist compasses.

This, however, did not end there: to help the combat swimmers, the Wehrmacht fighters on the front line had to set fire to some shed around midnight and maintain a bright flame for several hours. As all returning pilots confirmed, this fire was clearly visible from the sea. Having passed it on the way back, they could safely sink their carrier torpedoes, not doubting that they would get to the coast occupied by the Germans. In addition, the German anti-aircraft battery fired a series of lighting shells every 20 minutes in the direction of the port of Anzio. True, its range was not enough to illuminate the ships in the roadstead, but the shells indicated the required direction to the Neger.

At 21:20 on April 1944, XNUMX, the first operation of German naval saboteurs started. 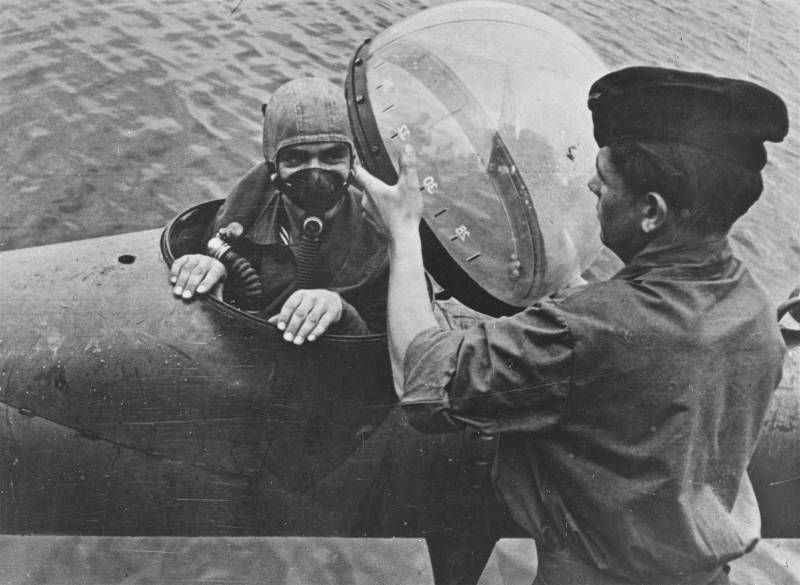 The pilot of the German man-controlled torpedo "Neger" sits in the cockpit before leaving for a combat mission. Photo source: waralbum.ru
The operation did not go according to plan already at this stage: the infantrymen considered the task entrusted to be another stupidity of the high command, and began to actively sabotage the descent of the Negerov. The soldiers threw human torpedoes on the shallows, refusing to push them into the sea, as a result of which only 17 vehicles were launched and headed for Anzio. The remaining 13 fell victim to the Wehrmacht soldiers shirking from work and were blown up in shallow water the next morning.

Before the start of the operation, the pilots were divided into three battle groups. The first, led by Senior Lieutenant Koch, was supposed to round the Cape at Anzio, penetrate into Nettun Bay and find enemy ships there. The second, more numerous, under the command of Lieutenant Zeibike, was supposed to attack the ships that were in the roadstead near Anzio. The other five pilots, under the command of Midshipman Pothast, intended to infiltrate the port of Anzio itself and fire their torpedoes at ships that might be there, or along the quay wall.

Among the successfully launched 17 "Negers" was the entire Koch group - she had the farthest journey, and she was launched first. In addition, about half of the devices of the Zeibike group and only 2 torpedoes from among those on which were to penetrate the port of Anzio were afloat.

In this composition, the flotilla entered the first combat mission.

“We assumed that enemy escort ships, designed to protect the main force, would drop depth charges from time to time. If I was on the right course, I should have heard these breaks soon.

Having heard nothing of the kind, I decided already at the beginning of the second hour of the night to take a new course - to the east, as I was afraid that I had been carried too far out to sea. However, my fears did not materialize. Going on a new course, within ten minutes I saw the lights in front of me.

Apparently I was near Anzio. At 1 hour 25 minutes. I noticed a small vessel ahead of me on the right, passing by me at a distance of about 300 m. No guns were visible. The vessel, judging by its dimensions, could have been a tender. It was heading for Anzio. Its silhouette was still distinguishable against the background of lights for some time, then it disappeared.

About 1 hour 45 minutes I saw another small, apparently patrol ship, this time standing still. I turned off the electric motor so that the escort vessel could not see me or hear the noise of my engine, and drifted past this vessel. I was sorry to spend a torpedo on it, since I still hoped to meet large landing and transport ships. "
- Ober-Fenrich Hermann Voigt, member of the raid on Anzio.

One way or another, the difficulties of the operation did not end with only one launching of human torpedoes into the water. The German combat swimmers had a long journey (more than 2,5 hours) in the cramped cabins of the Negerov. But the biggest problems started when they got close to Anzio ...
Perhaps what happened next at least caused confusion among the German naval saboteurs: they went to the port, hoping to arrange a real massacre among the ships of the allies, confirming the viability of the idea of ​​asymmetric naval war, and as a result they only discovered that both Anzio's raid and the port itself were ... empty.

However, the gloomy genius of the German military machine gathered his bloody harvest that night. Despite the absence of Allied transport ships, both patrol ships and port infrastructure were located in Anzio - they were the victims of the combat swimmers that unfortunate night.

1. Ober-Fenrich Voigt sank an escort ship in the roadstead.

2. Ober-Fenrich Pothast sank a steamer in the harbor.

4. Schreiber-Chief Corporal Walter Gerold blew up an ammunition cellar under an artillery battery in the harbor.

5. Sailor Herbert Berger (17 years old), torpedoed and destroyed the port fortifications. For this operation, he was awarded the Iron Cross of the 2nd degree and received the rank of corporal.

The results of the operation were twofold.

The German high command received them with enthusiasm - the raid on Anzio was considered successful. And the German military leadership had the hope that enemy superiority at sea could be leveled out by asymmetric means of waging naval warfare.

On the other hand, the very first combat operation of naval saboteurs showed not only the prospects for such an approach, but also the growing decline in the capabilities and resources of the Third Reich: the raid was carried out almost blindly, the "K" unit did not have any reliable and fresh information about the enemy in Anzio. The command could not even provide air reconnaissance, let alone anything more. 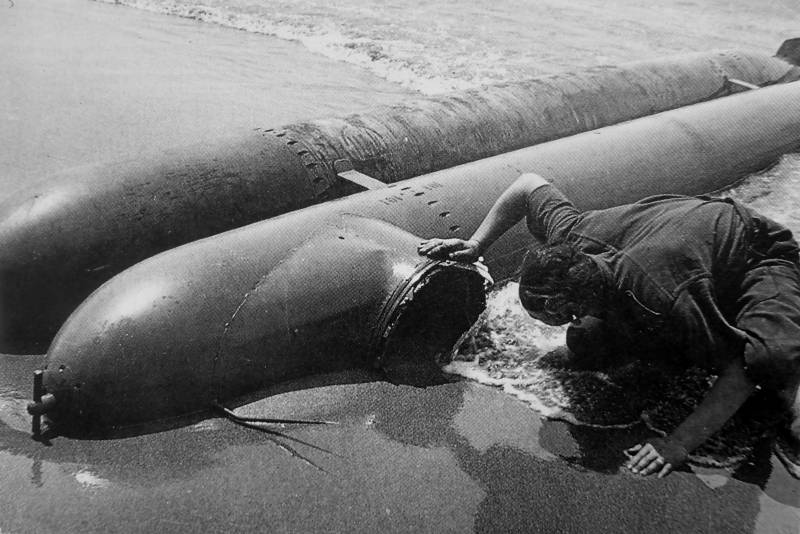 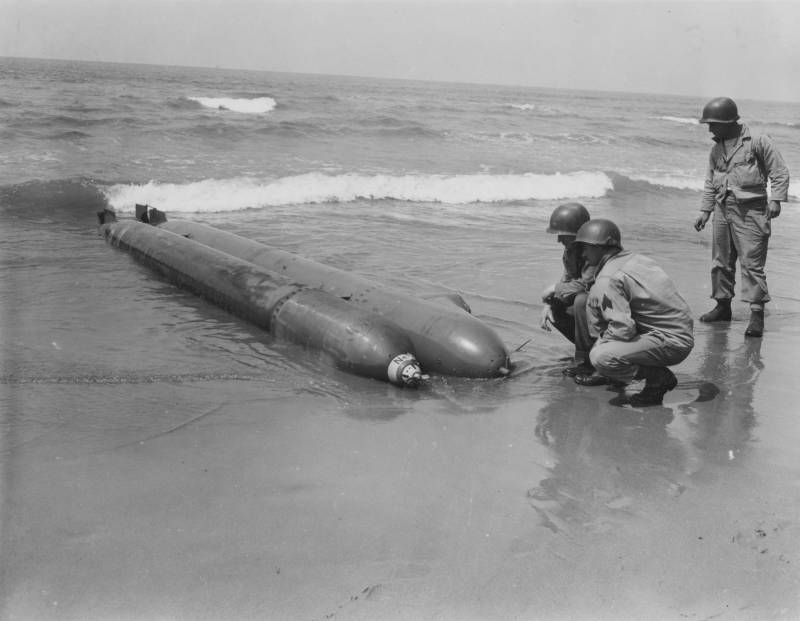 American soldiers inspect the German-controlled Neger man-torpedo, washed ashore on the beach in Anzio. Photo source: waralbum.ru
Additional difficulties were imposed by the imperfection of the human torpedoes themselves, the combat effectiveness of which depended entirely on the luck and personal qualities of its pilot. Lack of communication, the possibility of coordinating actions and means of navigation, low speed, high accident rate, the complexity of deployment - all this imposed restrictions that made the "Neger" disposable weaponsnot suitable for mass use. However, we will talk about this in the next article.

One way or another, the combat debut of the German human torpedoes, despite the damage inflicted on the enemy and low losses, was unsuccessful.

From now on, the allies knew about the new threat - there was no more surprise factor. Moreover, the very next day the Americans one of the "Neger", the pilot who fell victim to an accident (on the night he was one of three dead marine commandos) and poisoned with carbon dioxide has been found - is it possible to estimate the new weapons of the Third Reich and to prepare for reflecting a new danger ...