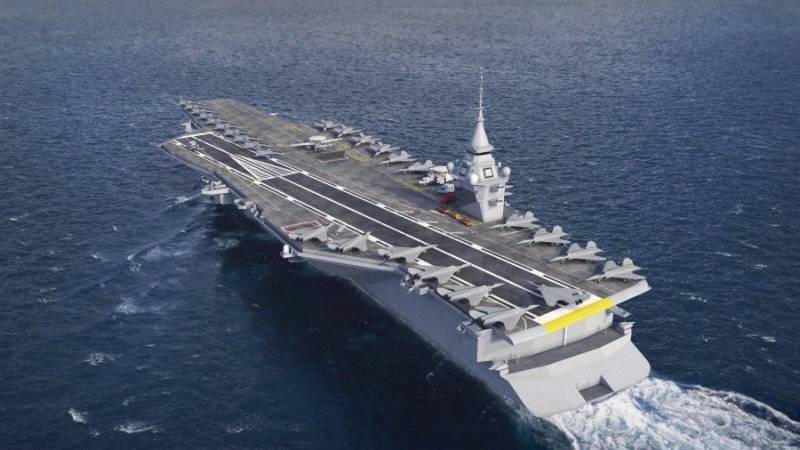 France has decided to disclose data on its new aircraft carrier, which it has yet to build and has published a detailed construction program. The data was presented to the French Ministry of Defense.


According to the published information, the construction of the new generation aircraft carrier will be carried out at the shipyard in Saint-Nazaire in western France. It is planned to use a large-block assembly. The aircraft carrier should be completed by 2036, after which it will be tested in Normandy. It should enter service by 2038 and replace the only aircraft carrier Charles de Gaulle in the French Navy.

The displacement of the ship will be 70 thousand tons, the crew - 1100 people, as well as 700 people from the air wing. The aircraft carrier will receive a nuclear power plant and electromagnetic catapults.

The carrier-based version of the French Rafale-M fighter, rather than the American F-35C fighters, will form the basis of the new aircraft carrier's air wing. To adapt the Rafale M to the American EMALS-type electromagnetic catapults, which are planned to be equipped with an aircraft carrier, the carrier-based fighter will undergo a series of tests in the United States.

Note that for the French Rafale M fighters, takeoffs from American aircraft carriers will not be the first. In 2018, the aircraft carrier George HW Bush (CVN-77) received French fighters, which made a number of sorties together with American AWACS E-2C aircraft.

It is planned that the new aircraft carrier in the future will take on board new aircraft created under the SCAF program (Système Aérien de Combat Futur - system of combat aviation future).