Suspicious US Air Force C-130J special flight from Riga to Kiev. What should be taken into account by the command of the army corps of the LDNR and the General Staff of the Russian Armed Forces 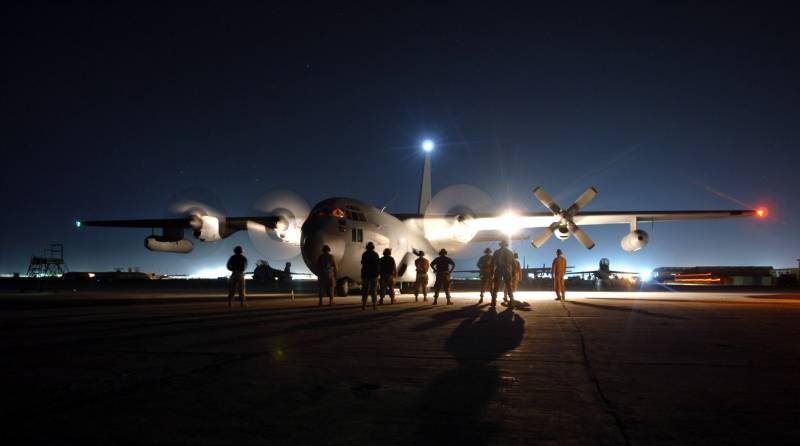 Against the background of the US Air Force's C-17A Globmaster III heavy military transport aircraft continuously delivering to Ukraine a wide range of portable radio and electronic reconnaissance equipment, thermal imaging sights based on the 3rd generation image intensifier, mobile anti-jamming tactical communication / data exchange and relay systems, complexes electronic warfare and, most likely, additional counter-battery radars of artillery reconnaissance and the next batches of Javelin ATGMs, most military experts and competent military observers (not to mention the news authors of ordinary information platforms) missed a rather important detail of the observed "NATO express" organized in within the framework of urgent preparation for the implementation of the escalation scenario in the Donbass and Azov-Black Sea theaters of military operations.


We are talking about a very unusual flight of the American military transport aircraft C-130J Super Hercules, carried out on April 11, 2021 from Riga to the capital of the "Square" and recorded by A3H-B / ADS-B IN receivers, relaying information about regional and global air traffic to the server of the portal "Flightradar24.com".

In light of the observed achievement of the apogee of both the diplomatic dive and the operational-strategic confrontation between the member states of the North Atlantic Alliance, on the one hand, and the Russian Federation, on the other, numerous journalists and even military experts did not attach any weight to this information.

Indeed, in the conditions of the outbreak of pre-escalation chaos, when in the states of the Baltic and Black Sea regions (including the waters of the seas) there is a hasty deployment of the widest range of forces and means of the NATO Joint Armed Forces, this event can be mistakenly interpreted as just a small touch that gives the observed picture the proper completeness.

In reality, we can talk about the delivery of a very serious high-precision lethal weapons, capable of providing mechanized brigades of the Armed Forces of Ukraine in the Donbass theater of operations not only with parity, but confident dominance in the confrontation with armored vehicles of motorized rifle units of the 1st and 2nd army corps of the LDNR, not excluding a certain degree of threat to the equipment of the 20th and 58th combined-arms armies of the Ground Forces Russia (in the case of the start of the "Operation to compel Kiev to peace").

As you know, back in 2018, a contract worth 108 million euros was signed between the Latvian defense department and the Israeli defense company Rafael for the supply of more than 400 Spike-LR / -2 anti-tank missile systems to the Latvian army; The Bundeswehr has more than 1000 Spike complexes in similar modifications (as you know, a similar flight of the second Super Hercules from Stuttgart to Kiev also took place on April 11, 2021).

Consequently, the likelihood of the presence of ATGM data in the nomenclature of cargo delivered to the Ukrainian military formations by the US Air Force C-130J aircraft is extremely high, as well as the likelihood of their further deployment and use in the Donbass theater of operations.

Unlike the American FGM-148 Javelin ATGMs, which have anti-tank missiles with a range of no more than 2500 m and long-wave infrared seeker based on telluride-cadmium-mercury matrix IR photodetectors with a resolution of 64x64 elements (which do not differ in the highest noise immunity and the ability to select targets for low contrast background of the use of IR traps), anti-tank guided missiles of the "Spike-LR / -2" line can boast of several tactical and technical advantages at once.

First of all, this is a more massive and energy-efficient solid-fuel charge of the gas generator, which provides an ATGM with a range of 4500 m (for Spike-LR) and 5500 m (for Spike-LR-2), respectively (when launched from ground vehicles), which eliminates the likelihood of the "Spike" crew hitting the zone of destruction of long-range large-caliber rifles and 12,7-mm machine guns of the enemy, and also reduces the likelihood of detection by portable radars of artillery reconnaissance "Fara-VR" and 1L227 "Sobolyatnik" ).

Secondly, this is a promising multispectral (2-channel) optoelectronic seeker, represented by both a high-resolution CCD television photodetector of the visible optical range and an advanced IIR (Imaging Infrared) type medium-wave infrared sensor, which provides "capture" not only the most heat-emitting elements of the attacked piece of equipment, but also the most vulnerable areas of its upper projection (in accordance with the list of pre-loaded templates with the classes of armored vehicles).

And finally, thirdly, it is the presence of additional fiber-optic, or radio command, telemetry data transmission lines and the implementation of radio correction (control) of the Spike-LR / -2 ATGM on the trajectory, thanks to which the Spike family complexes are capable of firing from closed by elements of the terrain or structures of positions, with the possibility of receiving target designation from third-party sources of optical-electronic / radar / radio-technical reconnaissance, as well as forward guidance by the operator in manual mode, which is used in case of disruption of the capture of the "target" with active optical-electronic counteraction from the enemy ...

In this situation, the Russian defense department should intensify the retrofitting program tank units in the most unpredictable operational areas (including Donbass) with promising Arena-M KAZ, as well as to increase investments in the program for the development of promising anti-tank systems with infrared and television seeker, announced a few months earlier by the industrial director of the cluster of weapons, ammunition and special chemistry of Rostec Bekkhan Ozdoev and carried out Tula KBP.

Ctrl Enter
Noticed oshЫbku Highlight text and press. Ctrl + Enter
We are
A proper response to the delivery of Kiev ATGM FGM-148. Complexes "Svir" will be able to stop the upcoming offensive of the Armed Forces in the DonbassSituational analysis of the death of the MH17 flight (Malaysian Boeing 777), made on the basis of engineering analysis from 15.08.2014
Military Reviewin Yandex News
Military Reviewin Google News
124 comments
Information
Dear reader, to leave comments on the publication, you must sign in.