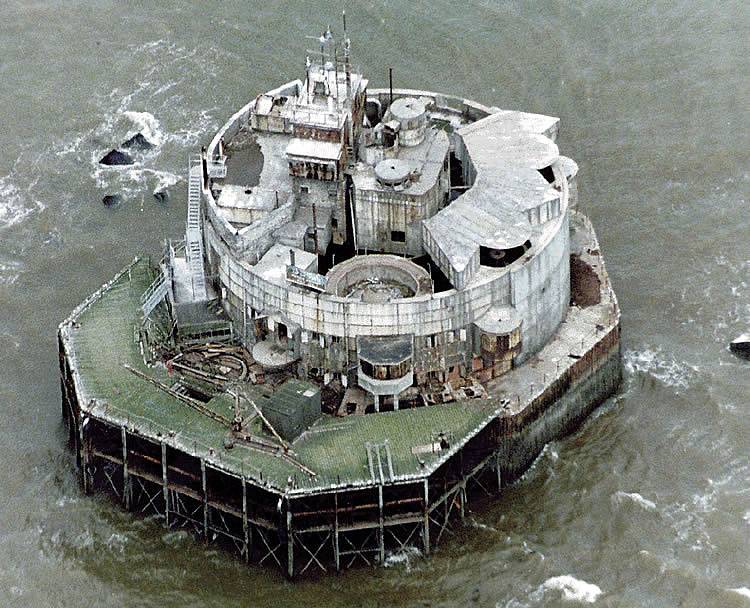 Great Britain, spread out on the islands, is a natural fortress. Since the Norman conquest of England, no one has successfully attempted to land on the islands, but the XNUMXth century has seriously altered the balance of power.

Britain was still the largest naval power with the strongest fleet, but technological progress gave the opponents of the kingdom more chances of success, and the German fleet by the beginning of the First World War became the second largest in the world.

To protect themselves from the German fleet and cover their communications, the British launched a serious military construction, erecting fortifications and coastal batteries on the coast, as well as creating forts. In 1914, two artillery forts were planned to be built in the Humber estuary near the port city of Grimsby.

Prerequisites for the construction of forts

It was decided to build the forts at a distance from the coast in the Humber estuary (from the Latin aestuarium - "flooded river mouth"). The Humber Estuary is a single-arm funnel-shaped river mouth that widens towards the North Sea. The Humber is formed by the confluence of the Trent and Ouse rivers. 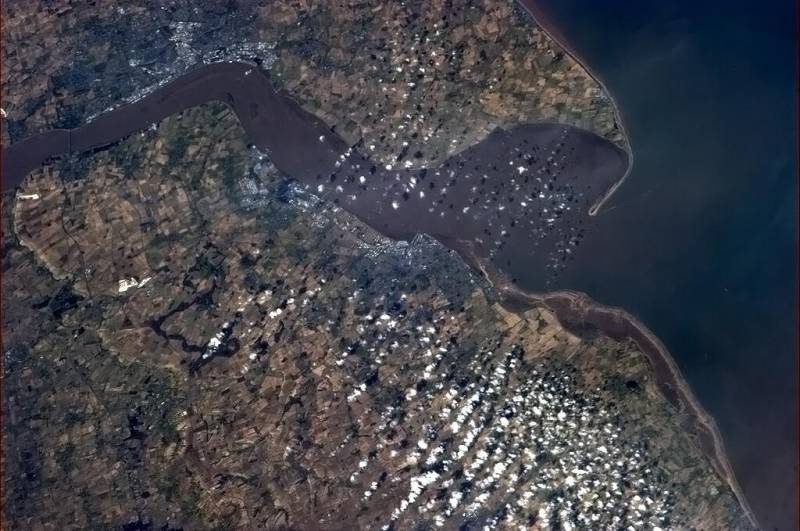 Estuary Humber, image from the ISS
This estuary was of great importance for the navy and merchant fleet of Great Britain, therefore, it was decided to protect the entrance to it from the sea already in 1914 with two forts, the construction of which began only in May 1915. At the same time, the British military had been hatching plans to protect the Humber since the early 1900s, realizing the strategic importance of this geographical facility for their fleet.

The Royal Navy needed the Humber Estuary as it was the only major anchorage on the east coast of the country between the Thames and Forth rivers (in Scotland). At the same time, the threat from the German fleet was not illusory. German ships and submarines appeared in the area as early as 1914.

The Humber in the north of England was of strategic importance not only to the navy, but also to the merchant fleet. This estuary was chosen by the British as a safe place for gathering convoys. To protect the entrance to the estuary from the North Sea, it was necessary to build a system of fortifications. Quickly enough, the British established two artillery batteries on either side of Cape Spern, complemented by two forts directly at the entrance to the Humber and railway batteries in the section between Cleethorpes and Grimsby.

There were indeed plenty of targets for the High Seas Fleet in this area. The British feared that the German fleet could destroy the port infrastructure, as well as the docks at Grimsby and Immingham. In addition, there were 35 large oil tanks in the area of ​​Cleethorpes, and there was a fuel base for the Royal Navy. Another target could be the Admiralty wireless station in New Waltham, the main station on the east coast of England. 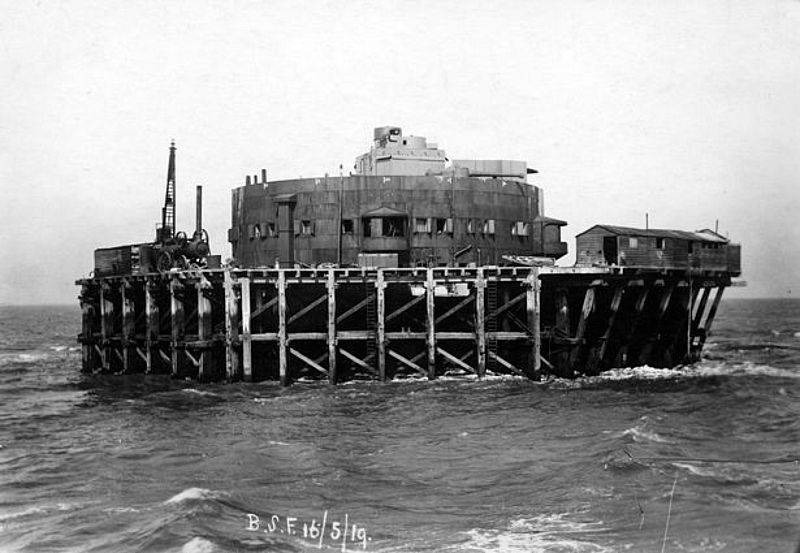 Fort Bull Sand under construction
If the artillery batteries were deployed quickly enough, there was a serious hitch with the forts. The construction of the two forts began only in April-May 1915 and dragged on until the very end of the war. The Haile Sand Fort was officially commissioned only in March 1918 (the guns appeared here in April 1917), and the Bull Sand Fort after the end of the First World War - in December 1919 (the artillery pieces were installed a month before the end of the war in October 1918).

Description of the Humber forts

There is no exact cost to build two forts. But according to rough estimates, the largest of the two Bull Sand forts cost the British treasury a million pounds, and the smaller Haile Sand - 500 thousand pounds. For this money, the British received impressive fortifications that never took part in the First World War. True, the forts came in handy again during the Second World War.

The first of two Haile Sand forts was built on a concrete hexagonal foundation on a small sandbank located about 500 meters off the coast of Lincolnshire. The guns were installed on it by April 1917, and the official delivery took place in the spring of 1918.

Externally, the fort was a four-story well-fortified structure, the surface of the fort was round. The walls of the fort were additionally covered with light steel armor. Internal steel supports provided additional strength to the reinforced concrete structure. The structure was crowned with a two-story observation tower of the central battery. 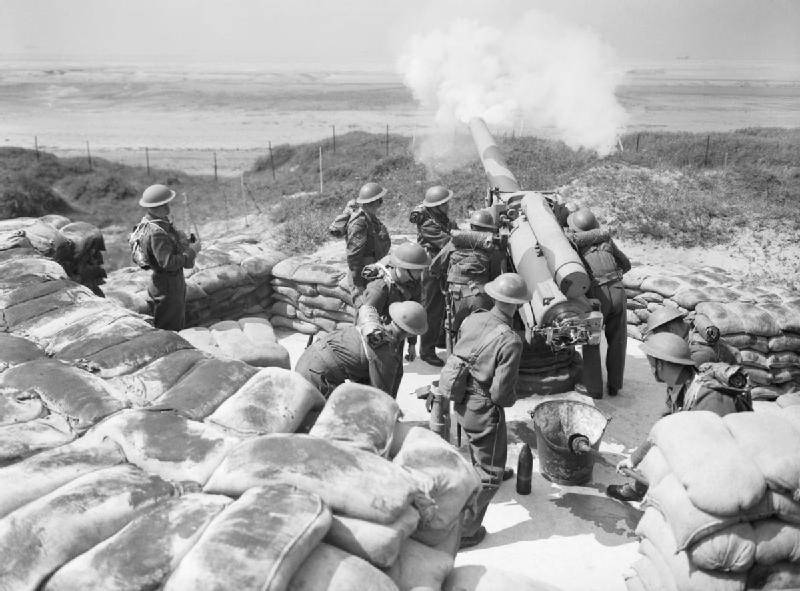 102-mm naval gun Mk IX on the coastal battery
Initially, according to the project, the fort housed two rapid-firing 4-inch naval guns. The famous British 102mm naval guns Mk IX. Guns with a barrel length of 45 calibers had a rate of fire of 10-12 rounds per minute and sent 14 kg shells at a distance of up to 12 meters. These guns were massively used by the Royal Navy during the First and Second World Wars.

The larger Bull Sand Fort was built two and a quarter miles (approximately 3,6 km) southwest of Fort Haile Sand. From this fort to Cape Spern was approximately 2,4 km. The fort was built on a flooded sandbank. It is for this reason that the construction of the facility was fraught with great difficulties and was so delayed in time. The protective structure was built on a sandbank, the top of which was 3,4 meters below the water level.

To form a solid foundation, concentric steel rings were driven into the sandbank and filled with rubble. Externally, the fort was also a four-level circular building on an octagonal foundation. It was a massive structure made of steel and reinforced concrete. The total amount of concrete and steel spent in the construction is estimated at 40 thousand tons. 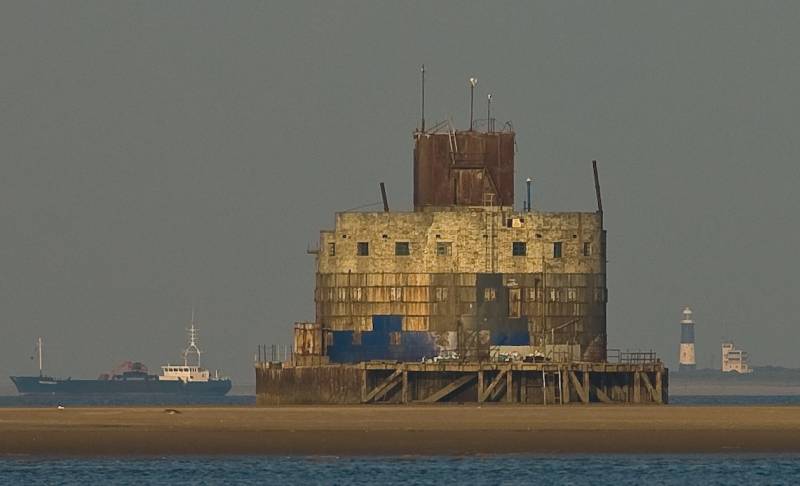 Fort Haile Sand nowadays, in 2018 was sold for 117 thousand pounds
From the sea side, the fort was additionally protected by sheets of armor steel 12 inches (305 mm) thick. These armor plates were supposed to protect the fort from shelling from heavy warships of the German fleet. The fort rises 18 meters above the sea surface, and its diameter is approximately 25 meters.

On the lower floors of the forts, there were coal-fired boiler rooms, storage and guard rooms, kitchens, fresh water tanks. Above, there were officers' cabins and mess rooms, as well as barracks, there was also a medical office. Artillery positions were located on the upper floors. Fort Bull Sand had everything needed for the life of a garrison of 200 people.

According to the plans, the fort was to be armed with four 6-inch Mk VII artillery pieces and four 90-cm searchlights. The 152mm Mk VII naval guns were used by the British until the 1950s. A gun with a barrel length of 45 calibers sent 45 kg shells to a range of up to 14 meters. At the same time, the rate of fire of the gun reached 400 rounds per minute. 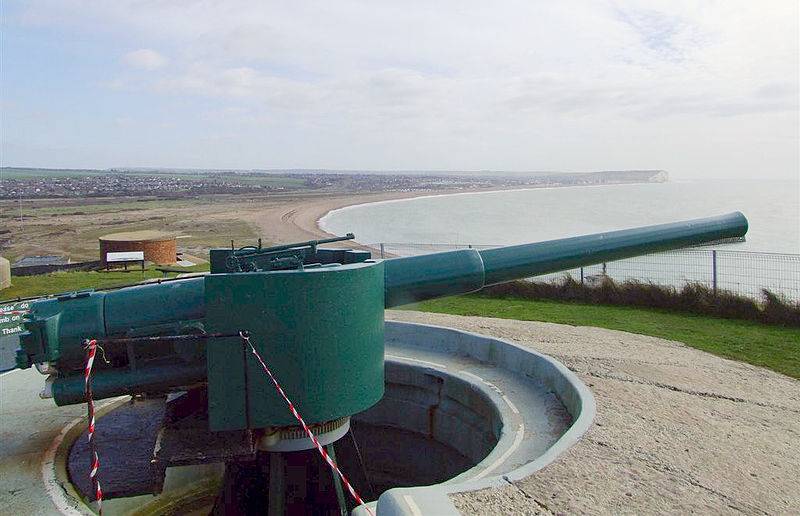 The fate of the Humber forts

After the end of the First World War, the forts were mothballed until 1939. With the outbreak of World War II, the garrisons were returned to the forts and the artillery was again deployed, though this time lighter. The garrison of the two forts in 1939 numbered 255 people, including 10 officers.

Two 6-pounder rapid-fire guns (57 mm anti-tank guns) were installed at Fort Haile Sand, and the same armament soon appeared at Fort Bull Sand. They also placed anti-aircraft artillery on them. Initially, heavy coastal artillery guns appeared on the forts, but they were quickly abandoned in favor of rapid-fire field guns.

This time, the British did not expect large enemy warships to appear near their coast. Therefore, the composition of the armament responded to the repelling attacks of high-speed small ships, for example, landing or torpedo boats. In addition, between the forts, the British drew a steel anti-submarine barrier under water to prevent German submarines from entering the Humber. 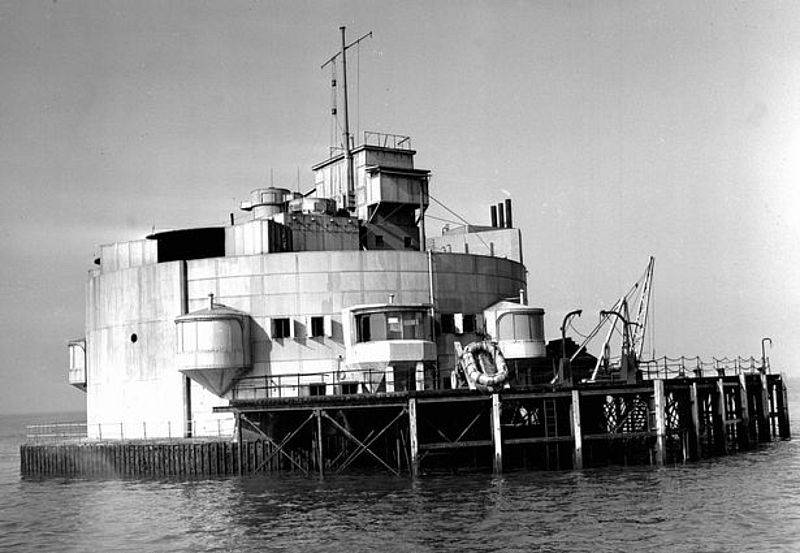 Fort Bull Sand after World War II
During World War II, the forts finally took part in the hostilities, often becoming the target of German attacks. aviation... At the same time, the Germans could not seriously damage or destroy the forts. After the end of the war, the British military continued to operate the forts until 1956, when they left them for good.

For many years, the forts of the Humber turned into abandoned structures that remain a local landmark, attracting tourists and British stalkers. Moreover, attempts were made to operate the facilities after the Second World War.

So, in 1997, the Streetwise charity was going to restore Fort Bull Sand, placing in it a rehabilitation center for drug addicts. The second fort, Haile Sand, was recently sold at auction for 2018 pounds in 117, the identity of the fort's buyers remained unknown. 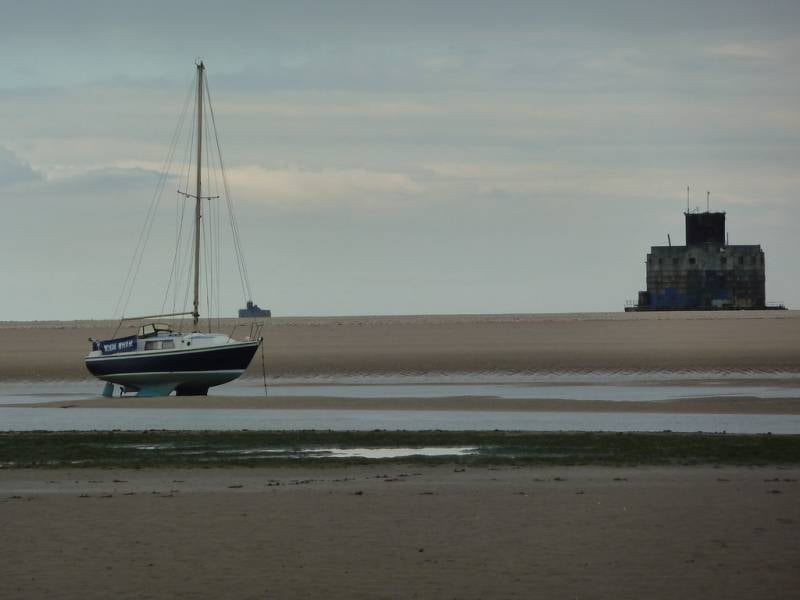 View of both Humber forts, with Haile Sand in the foreground