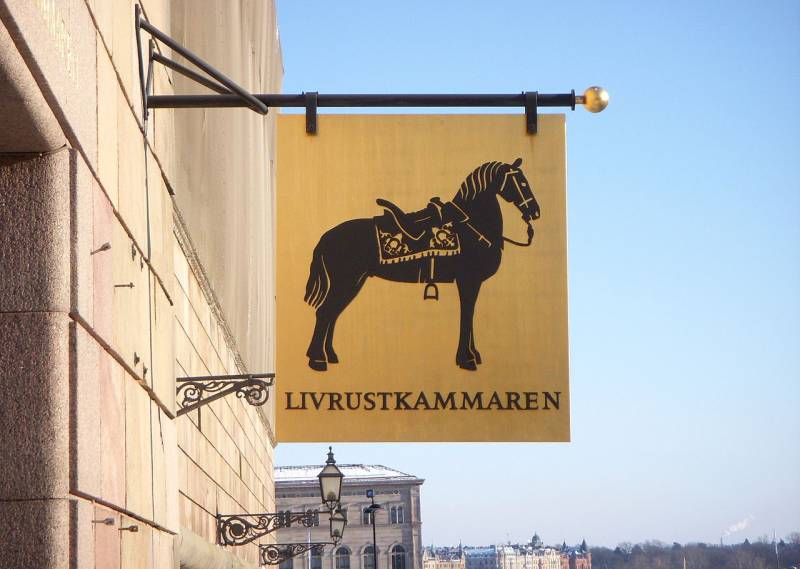 You will be in Stockholm, see this sign and come in soon. You won't have to regret!

King Eric did not receive the armor ordered in Antwerp, he did not receive it. The enemy got it! But the fact is that he already had armor of his own, local production, which were, of course, worse than the "armor of Hercules", but also very good!

"The king of Israel replied: - Tell him:" A warrior putting on armor should not brag like one who takes them off after victory. "
(I Kings 20:11)
Museum collections of knightly armor and weapons. And it so happened that a little earlier in 1562, King Eric XIV of Sweden ordered another, earlier in time armor, which was made for him in the workshops in Arbog, where labor was brought, for example, from Germany. On the other hand, it is likely that the gilding was done by the Frenchman Jacob Pasquier, who was then in Stockholm doing other work for Eric XIV, but was already decorated by Eliseus Libarts after the models of the French artist Etienne Delon in Antwerp. It is possible that this armor, in the fashion of that time, was carried back and forth, just to please the monarch. And ... in the end, they managed to deliver them to him before the coronation, at which he flaunted in them. Their entire surface was richly decorated with mythological figures, scenes of battles and images of "trophies", as well as the coat of arms of the Vasa family, three crowns and the coat of arms of the country. The material is steel with an etched and at the same time stamped pattern on it, as well as gilding of individual parts.

It is interesting that a large round shield with a convex middle was relied on to the armor, in general, at that time it was already completely unnecessary. The fact is that the quality of the armor as a whole was already such that any need for shields had long since disappeared. But on the other hand, a fashion has arisen for round shields of rondashi, of an exclusively ceremonial nature, once again telling about something important for their owner. This shield was decorated in high relief and filled with figurative scenes depicting the clashes of male warriors with Amazons. This is probably a battle scene from the Trojan War. According to the myth, the Amazons supported the king of Troy Priam in the war, but in the end they lost their queen Penthesilea, who was killed by Achilles. 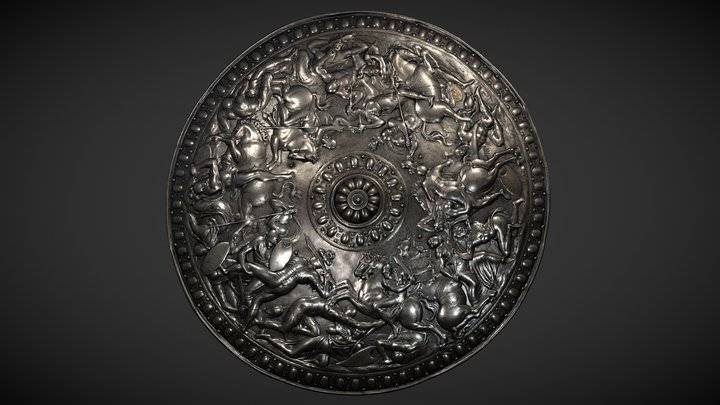 This shield from 1562! Royal Armory - Livrustkammarin, a museum at the Royal Palace of Stockholm
The following technologies were used to create the relief decoration of the shield: chasing, embossing, acid etching and gilding. From the inside, it was lined with red velvet. He was held by two ribbons sewn from velvet, 3 cm wide, with metal buckles to regulate their tension. 36 rivets with hex washers hold the fabric in place all the way around. This shield weighs 4,143 g. The diameter of the shield is 580 mm. 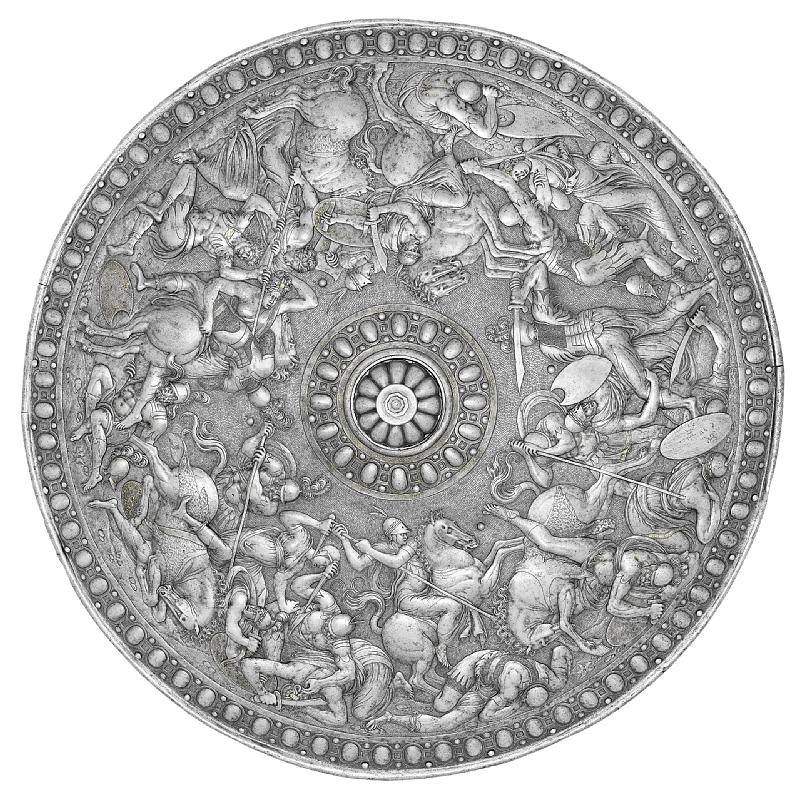 And this is a drawing of images on a shield in 1562. The Royal Armory - Livrustkammarin, a museum in the Royal Palace of Stockholm
The armor itself consists of 18 parts, and could serve both ceremonial and combat. The total weight of the armor is 25,6 kg. It is known that the king used it at one of the many festivities, in particular, at the festival held after the campaign against Denmark in 1564. Then Eric drove into Stockholm "with great triumph" and brought trophies and prisoners of war, which were a living illustration of the decor of the armor, which just depicted figures chained in shackles! 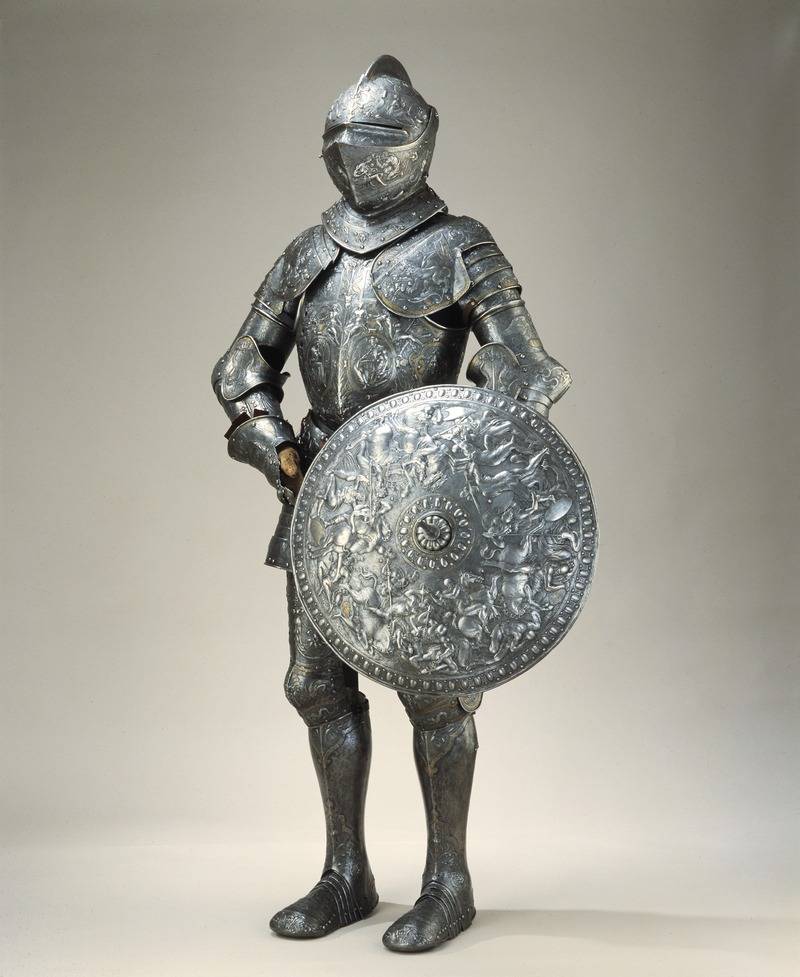 This is how this armor looked for King Eric XIV along with a round shield. Royal Armory - Livrustkammarin, a museum at the Royal Palace of Stockholm
The horse part of the set was delivered a year later, in 1563, and had a different decor. Apparently, it was sent as a sample, after which Eric ordered at least one more armor in Antwerp. 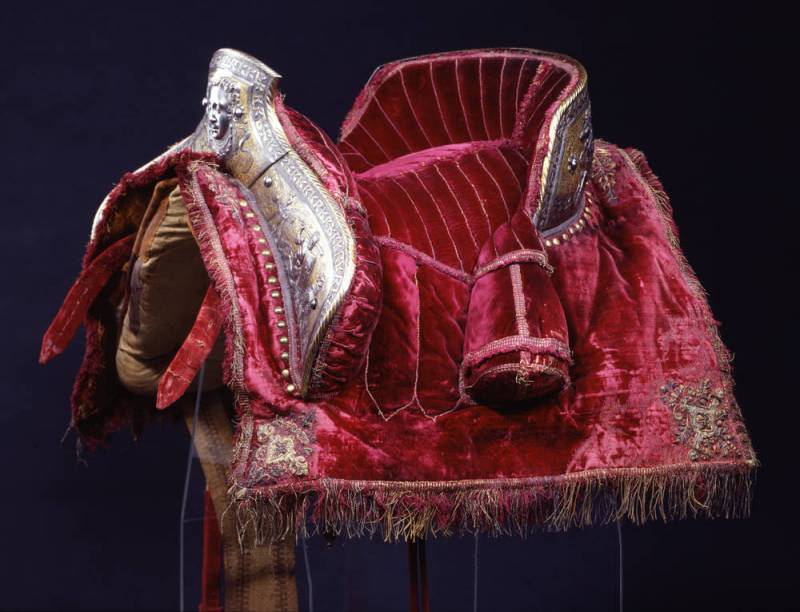 Saddle from this headset. Royal Armory - Livrustkammarin, a museum at the Royal Palace of Stockholm
The breastplate of the armor had a slightly pointed lower part, a flat top and was entirely decorated with patterns and figures of people engraved on it, as well as in some places lined with gold. Three holes on the right chest served for attaching a lance hook, that is, the armor could be used in equestrian combat. The belly armor is riveted at the bottom. The decoration of the cuirass is generally symmetrical, but the figures in the medallions differ. Moreover, since these are female figures, it can be assumed that these are the queens of the Amazons Lampeda and Marpesia. The weight of the bib is comparatively small - only 1,925 g. 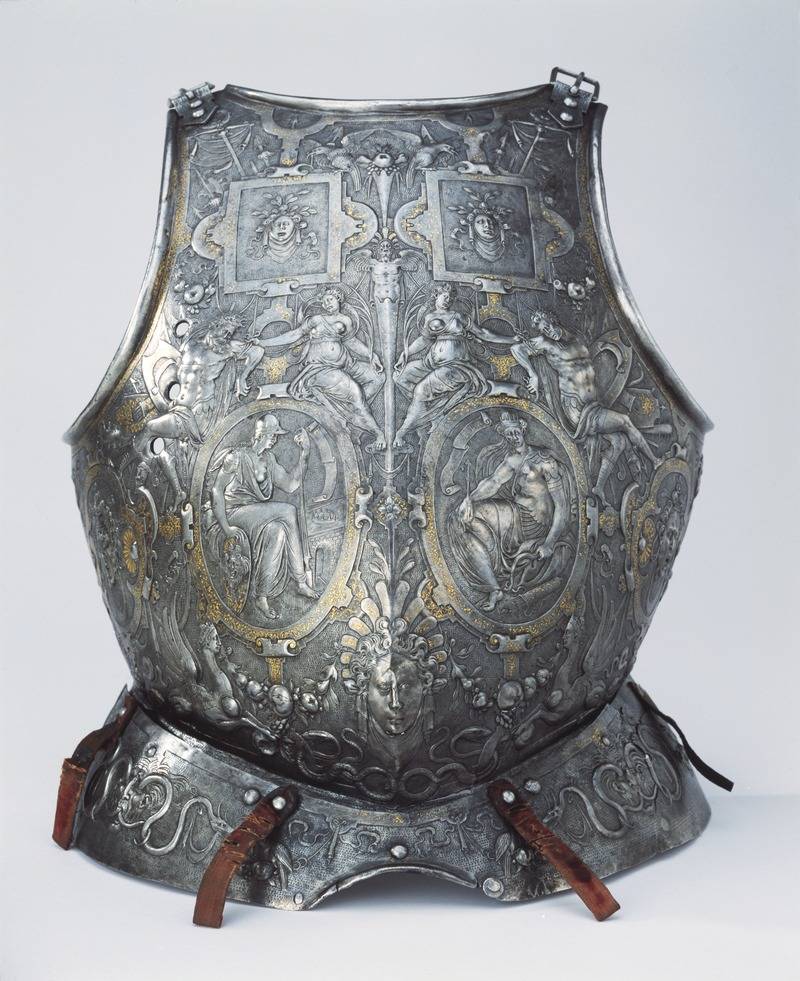 Breastplate, front, along with a short skirt. Royal Armory - Livrustkammarin, a museum at the Royal Palace of Stockholm 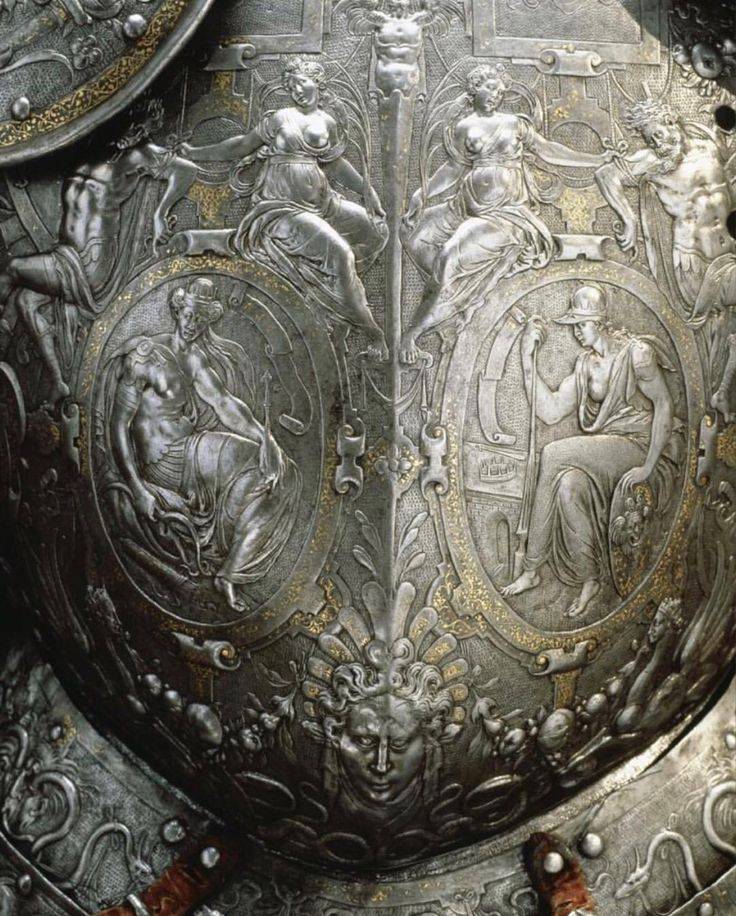 Cuirass. Close-up. The quality of the work is simply amazing! Royal Armory - Livrustkammarin, a museum at the Royal Palace of Stockholm
The dorsal part is even lighter - 1629 and is not so richly decorated, although its surface is also covered with patterns. There is only one medallion on it. And on it we also see Hercules. In general, judging by the number of "Hercules" on this armor, as well as their subsequent number on the armor in the Armory of Dresden, the image of this ancient Greek hero clearly struck the imagination of King Eric, but the creators of the armor knew about this and tried to please the king. 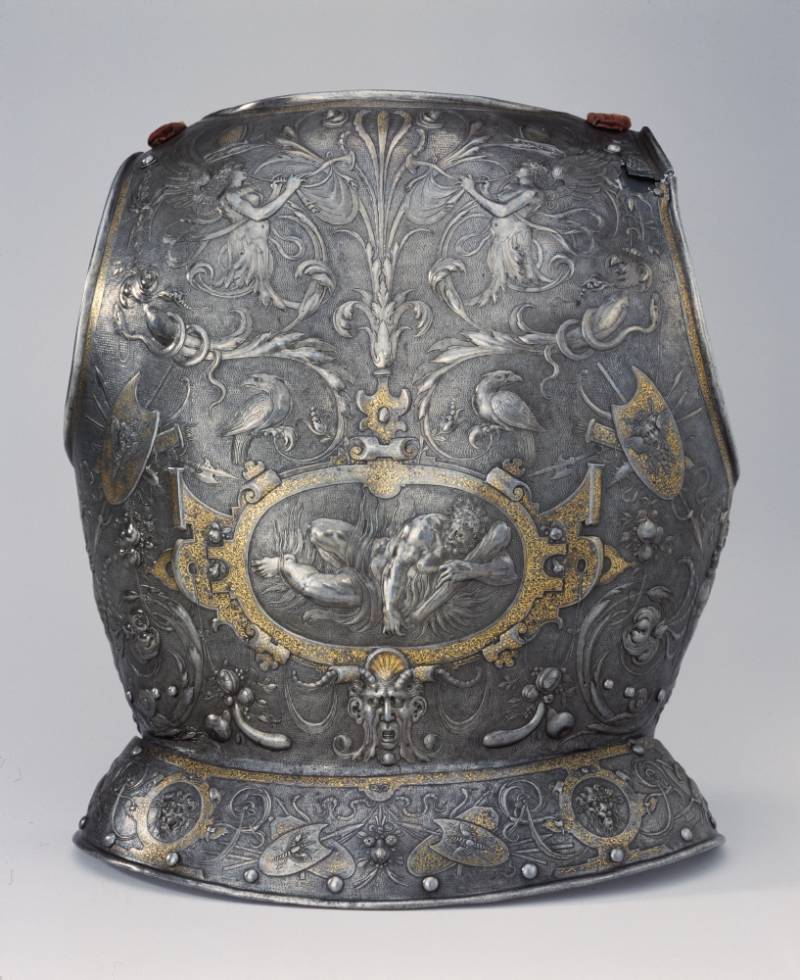 Breastplate, back part. In an oval cartouche on his lower back lies an exhausted Hercules, leaning on his club and surrounded by flames. Hercules wore a cloak poisoned with the blood of Nessus the centaur. It stuck to his skin, causing terrible pain. Because of the pain, he made a fire, on which he decided to burn himself alive. The fire, however, killed only his human essence, and he was accepted into the Kingdom of Heaven as a god. Royal Armory - Livrustkammarin, a museum at the Royal Palace of Stockholm
Helmet - a typical closed helmet with a crest, an armé helmet, with a visor and a collar of two plates. At the back there is a holder for a plume of feathers. The helmet, like other parts of the armor, is primarily distinguished by a very rich decor. Its entire surface is covered with relief figures and engraved decor. The edges of the parts are gilded. Some of the screws on the helmet are newer, so it is obvious that it has undergone restoration. The visor also depicts Hercules with his famous mace (right). These helmets were traditionally heavy. Usually their weight exceeded three kilograms. Eric's helmet was no exception. Its weight is 3,195 g. 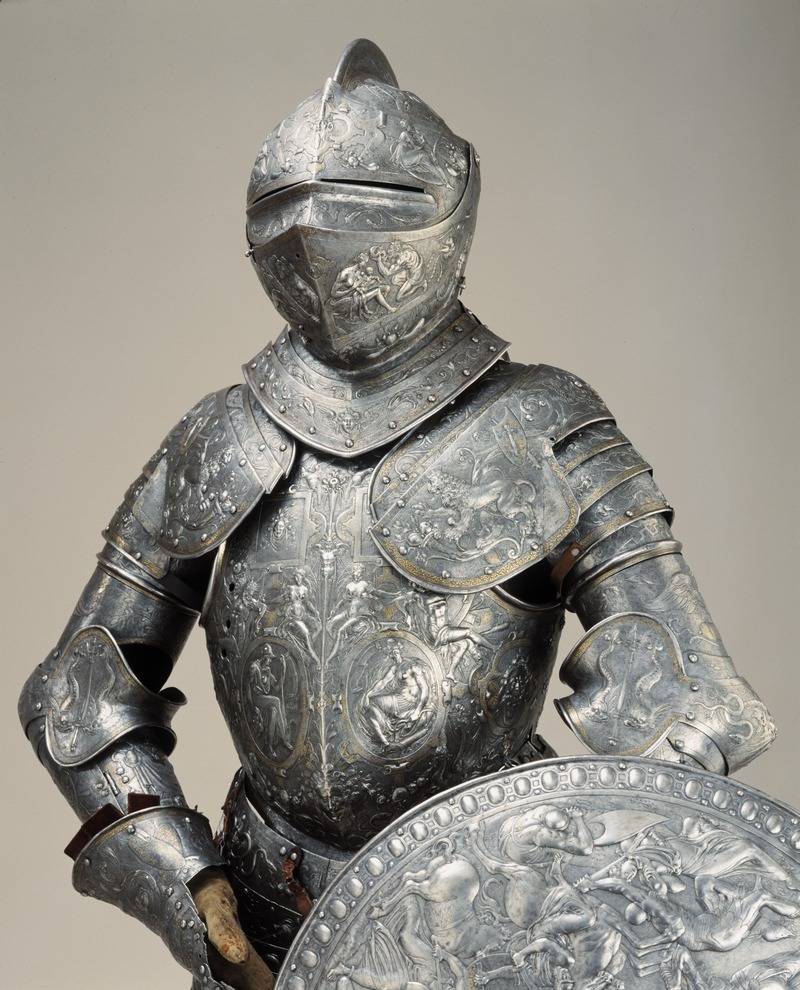 Left shoulder pad. Both shoulder pads are decorated with images of lions, "trophies" and bouquets of flowers. Royal Armory - Livrustkammarin, a museum at the Royal Palace of Stockholm
One of our regular readers and one of the readers last time in the comments to the material about the armor of the Greenwich workshop asked questions about how such parts of the armor, and in particular the same shoulder pads, were attached to a human figure. Look at this portrait.

Portrait of Walter Devereux, 1st Earl of Essex (1539-1576). Unknown artist. National Portrait Gallery, UK
He is wearing Greenwich armor, and you can clearly see that the shoulder pads are fastened to the armor with straps with buckles. But since a helmet with wide brims in the neck area was also worn on top, these straps were usually not visible. Another belt with a buckle fastened the shoulder pad on the arm a little below the armpit and, of course, was also invisible.

"Armor" for the leg included, in English terminology, "kuis" (legguard), kneecap, greave ("mane") and sabaton (plate shoe). The gaiter consisted of several plates overlapping one another and fastened with leather straps with rivets. This piece of armor protected the leg only in front, and it was fastened with two belts with buckles fastened at the back.

Greaves - "manes", protected the legs entirely from the knee to the ankles and exactly matched the shape of the lower leg. Usually they consisted of two parts, on one of which there were eyelets with holes, and on the other there were holes for them and hooks with which these eyes were locked on the leg. Sometimes the connection on the outside was carried out on hinges, but for the same Greenwich armor, the connection on hooks on both sides was characteristic. Below, sabatons and spurs were stuck to the "manes". 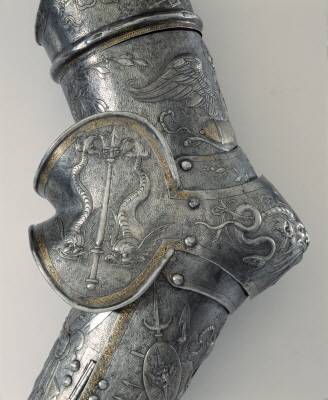 On top of that, the elbow pad was very beautifully decorated! Royal Armory - Livrustkammarin, a museum at the Royal Palace of Stockholm
The elbow piece together with two "pipes" on the arm - weighed 1798, tassettes (continuation of the "skirt") 619 each; leg armor along with sabatons - 1685; legguards for 1167, gorget 709; well, gloves - each 514 g. 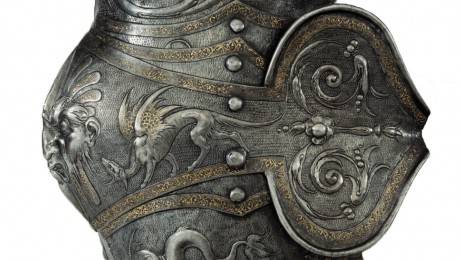 The snake-like figure is actually a dolphin. The dent on the knee pad, depicting a frightening face, is the so-called mascaron or mascaroni (Italian). They have been a popular decoration in different eras. Royal Armory - Livrustkammarin, a museum at the Royal Palace of Stockholm
In this magnificent armor, King Eric XIV of Sweden looked very solemn. In the spirit of the High Renaissance, the motifs of the armor were borrowed from ancient myths, and these myths were selected in such a way as to perfectly match the Swedish stories and national symbols of that time. 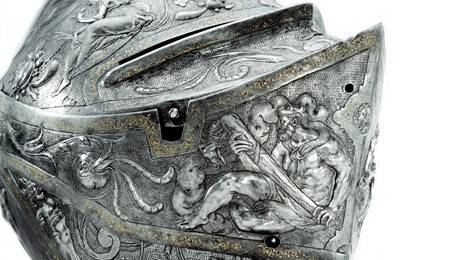 Visor of the helmet. On it, again, all the same Hercules in a lion's skin and with a club! Royal Armory - Livrustkammarin, a museum at the Royal Palace of Stockholm 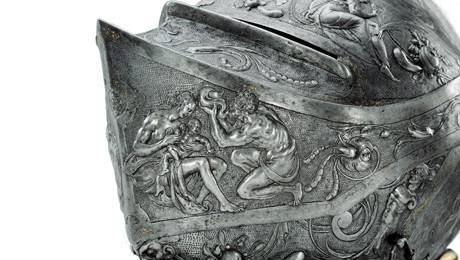 But this scene, depicted on the left side of the visor, causes controversy among historians. There are different interpretations of what exactly is depicted here. According to one version, we see here the goddess Hera, breastfeeding Hercules. But then what is the man with the twisted shell doing next to them? Trumpets her, notifying everyone that a great hero has been born? Royal Armory - Livrustkammarin, a museum at the Royal Palace of Stockholm 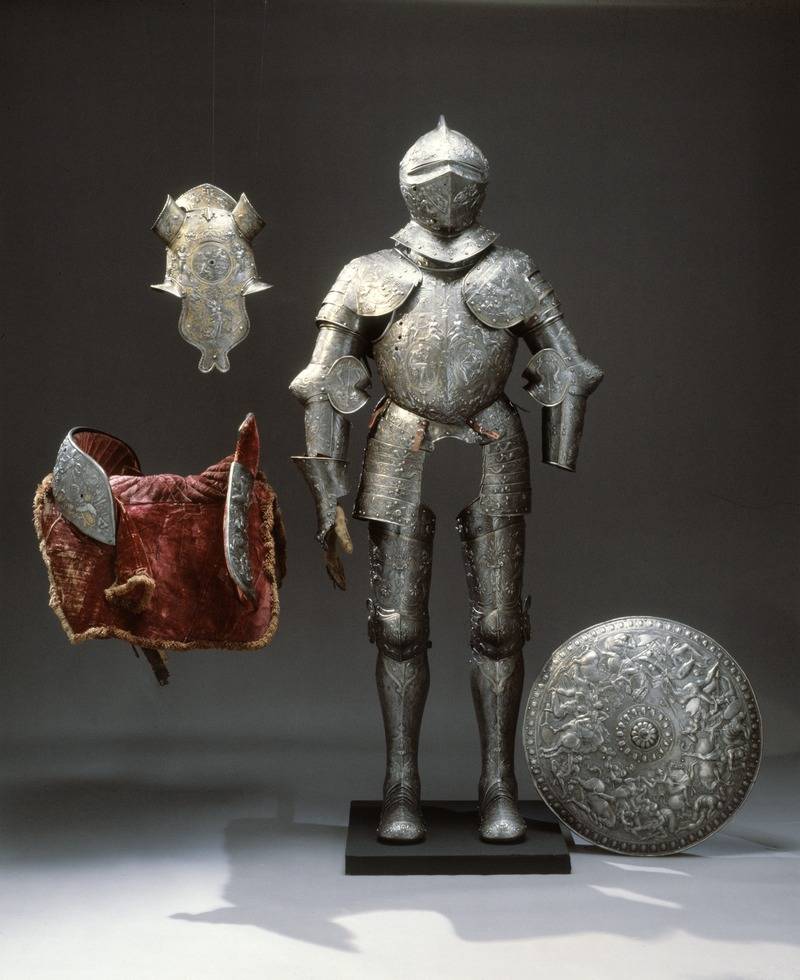 Eric XIV armor set. As you can see, both the saddle and the shaffron horse forehead - everything, absolutely all the details are made in the same style. Of course, this made a very strong impression on the commoners, and even on the nobility. Royal Armory - Livrustkammarin, a museum at the Royal Palace of Stockholm
And it is quite possible that it was in them that on October 2, 1564, Eric, after the military campaign in Blekinge in the south of Swedan, returned to Stockholm and with the whole army, like a Roman triumphant, proceeded through the streets of his capital. So then, when he had already lost his crown and became a prisoner, he had something to remember and something to regret!

PS The author and the site administration would like to express their gratitude to the curator of the Royal Armory Livrustkammarin Andreas Olsson, as well as Katharina Nimmerwall for the information and photos provided.