"Armor of Hercules". The most beautiful armor in history 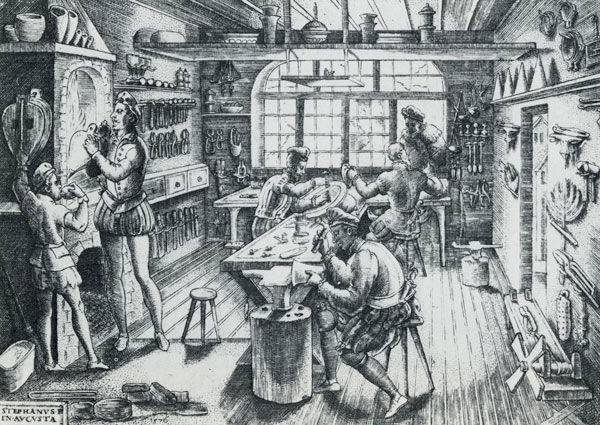 "Finally, everyone calmed down ..."
(Ghost King Eric III Desperate. "The Snow Queen" is a Soviet film based on the fairy tale by Hans Christian Andersen. Director - Gennady Kazansky, screenwriter Yevgeny Schwartz)
Museum collections of knightly armor and weapons. King Eric XIV of Sweden (1560-1568) was not “desperate”, as a fairy-tale character known in our country, but he was “insane” for sure. He strove for the greatness of Sweden, but was clearly ill with schizophrenia, and over the years his illness only only worsened. He fought in Europe, fought with Russia, and tried to improve the armament of his army and develop the art of war. He tried to consolidate his throne and wooed the English Queen Elizabeth. But unsuccessful. The growing suspicion led to unjustified killings and executions, which caused discontent among the people and the nobility. As a result, Eric was dethroned and imprisoned in the castle along with his wife and children. And although his content was more than preferential, the very thought that he, the rightful king, was deprived of the throne by his brothers, haunted him. There was a conspiracy to free him, but ... ended in failure. The organizers were executed, and the severity of the confinement was increased. As a result, he was poisoned with a bowl of pea soup, as evidenced by a forensic examination carried out in our day and found in his bones a significant amount of arsenic, and died in 1577. His tragic fate inspired Swedish writers, artists, poets and even composers, and the castle prison where he was held became a museum in 1985. 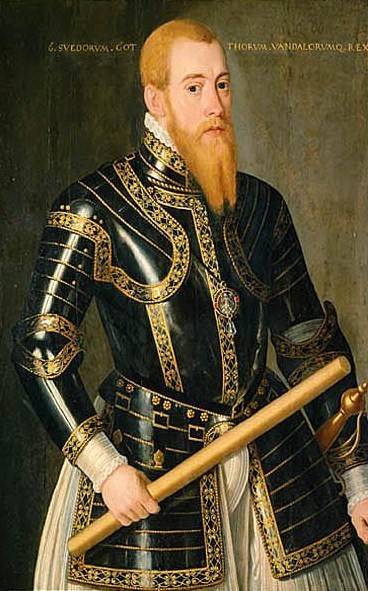 Portrait of Eric XIV by the Flemish painter Ferwilt Domenic (1544-1565). National Museum, Stockholm
However, he was perhaps most famous not at all for their cares and not even for popular rumor, but for the works of the Antwerp jeweler Eliza Liberts, who created for him, without exaggeration, the most beautiful and impressive knightly armor of "all times and peoples" that Eric did not need for war, and ... for matchmaking to Queen Elizabeth I of England, and then to Christina of Hesse. The set for the rider and the horse got the name "Armor of Hercules", because this antique character and his twelve exploits were the main theme of their design. 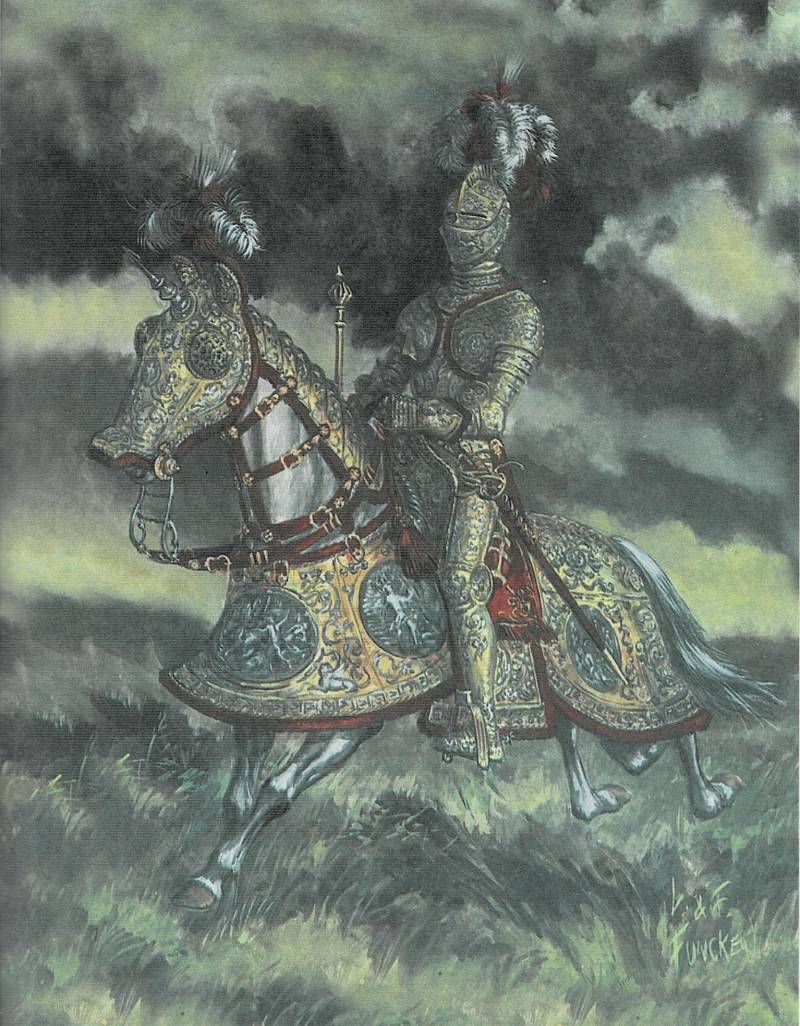 Perhaps this is how this illustrious king in this armor would have looked if he had received it ... Illustration from the book by Liliana and Fred Funkenov “Encyclopedia of weapons and military costume. Middle Ages. Renaissance: Infantry. Cavalry. Artillery. M .: Astrel, 2002, p. 107
He was ordered in 1562, and both attempts to seduce the marriage with his special designated ladies from Eric failed because of the war with Denmark. Moreover, he did not receive the armor itself. Since the jeweler Liberts was captured in 1565 during his trip to Sweden on the orders of the Danish king Frederick II, along with this armor, which became a good booty. He was offered the post of Chief Medalist of the Danish Kingdom, and in this post he remained in Denmark until 1572. And the set remained in Copenhagen until Christian II of Saxony in 1604 bought it for 8800 guilders from the jeweler Heinrich Knop for his younger brother and then Elector of Saxony Johann George I, probably on the occasion of his wedding to Sibylla Elizabeth Württemberg September 16, 1604. Well, after the death of the Elector in 1611 and up to the present, the armor was kept in the Armory of the city of Dresden and today it is deservedly considered its decoration. 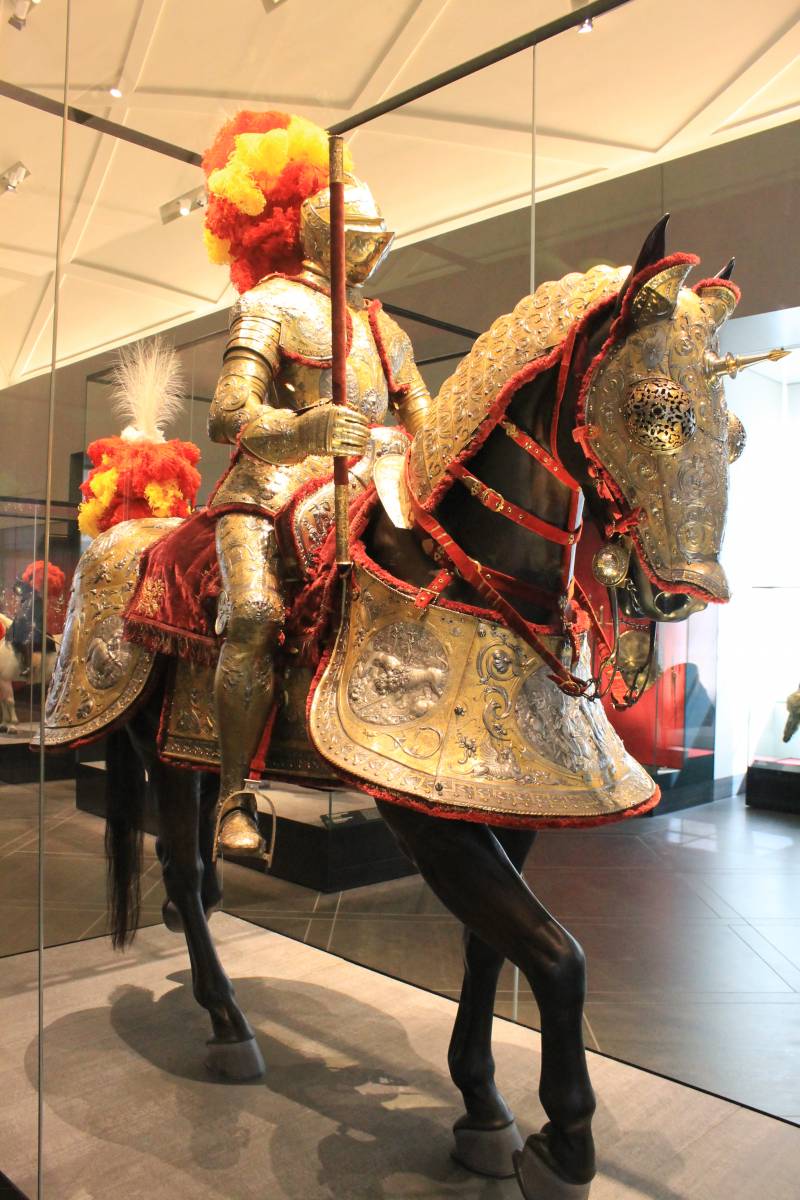 This is how they look today on display at the Armory of the State Art Collection in Dresden. Photo of the author
The complete set includes an armé helmet, gorget, cuirass, shoulder pads, elbow pads, bracers with gloves, tapes, legguards, knee pads, greaves and sabatons. Along with all this, the set also included horse armor, which consisted of a chanfron (forehead), a neutral (bib), a crinet - a lamellar neck protection, a flanchard - two side plates and a bib. The saddle, by the way, was also included in this headset. 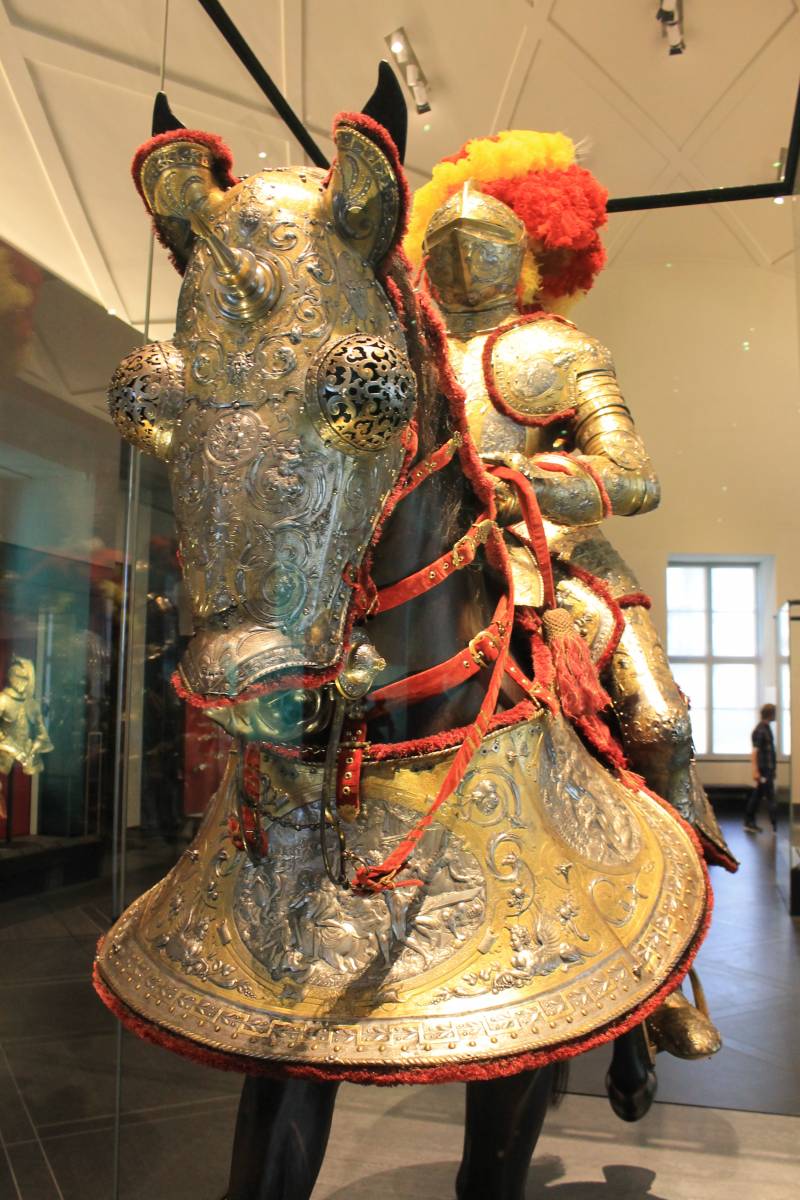 Front view of this headset. What a gorgeous horse mask with convex eyecups, and even with curly slits on them. Just some kind of a riot of fantasy. And most importantly - all around gold, gold and gold again! Photo of the author
Wanting to appear before Queen Elizabeth in luxurious armor and thereby impress her (and it was not at all an easy task to stand out in the crowd of her courtiers, also dressed in armor), Eric XIV tried to order something completely luxurious and impressive. And I ordered it! All parts of the armor are adorned with lush decor of leaves throughout the surface. In addition, the surface of the metal is decorated with flower garlands, butterflies, birds, snakes, dolphins, fruits, images of weapons, as well as musical putti, sphinxes, griffins and masks, and in addition, chased images in round and oval frames. There are eight medallions on knightly armor and fourteen on horse armor. And although the rider's armor bears motifs from the legends of Troy and the Argonauts, and Hercules' exploits are depicted only on horse armor, the set is nevertheless called the “Armor of Hercules”, apparently due to the larger size of the horse medallions. In any case, all this was supposed to indicate the heroic qualities of Eric XIV and clearly demonstrate them. By the way, the patterns for the armor were taken from the drawings of Etienne Delon (1518-1583), a famous French draftsman-ornamentalist, medalist, engraver and jeweler, whose "small ornaments" were very much appreciated and were widely used by gunsmiths to decorate the most luxurious armor of that time. 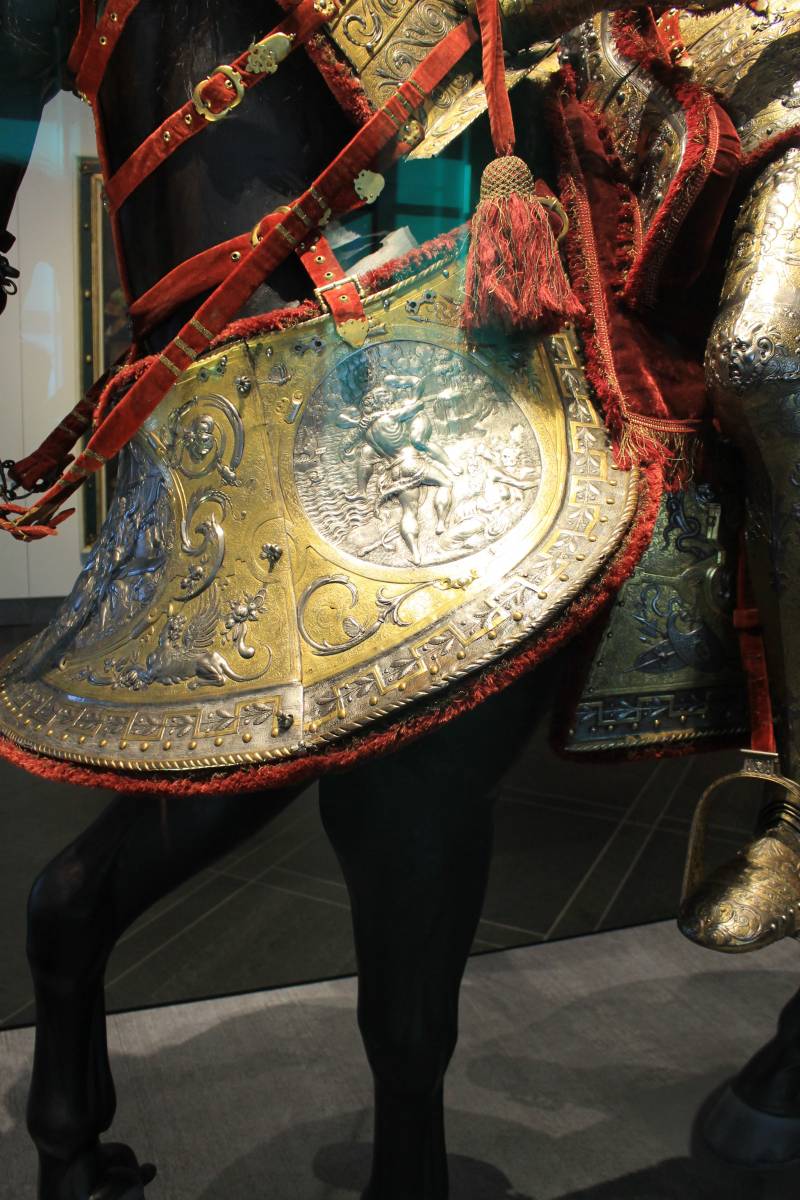 The equipment for the horse was extremely complex and consisted of many parts connected to one another with rivets. The total weight of the horse armor reached 31,762 kg. Whereas armor for a person is 22,262 kg. Photo of the author
For some reason, oval medallions symmetrically distributed on horse armor are located for some reason not in the chronological order of Hercules' feats, but depict a dichotomy of the twelve feats of Hercules, which he performed somewhere by force, and partly by cunning. 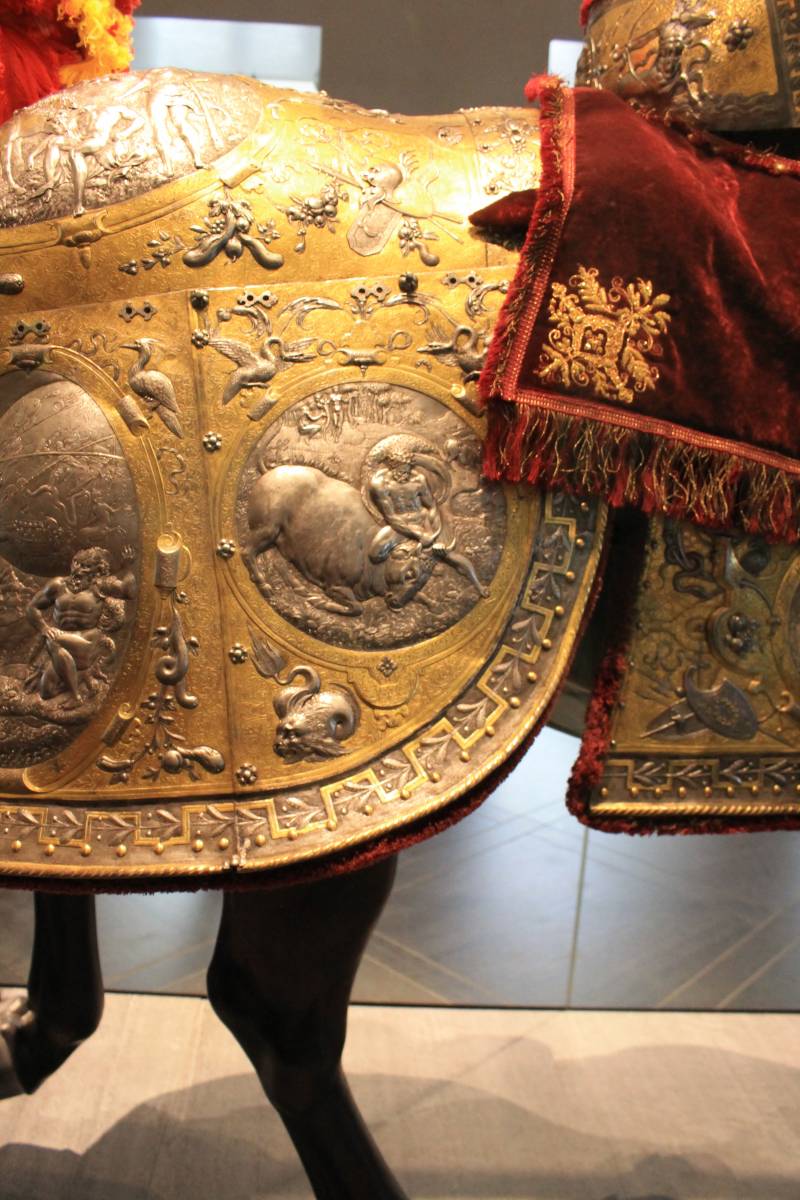 Hercules defeats the Cretan bull. Photo of the author
History exploits begins on the left side of the flankard, when Hercules, as a child, strangled Hera's serpent. Hercules' fight against the Nemean lion is shown on a medallion on the right side of the breastplate. So there is no sequence of events on horse armor. 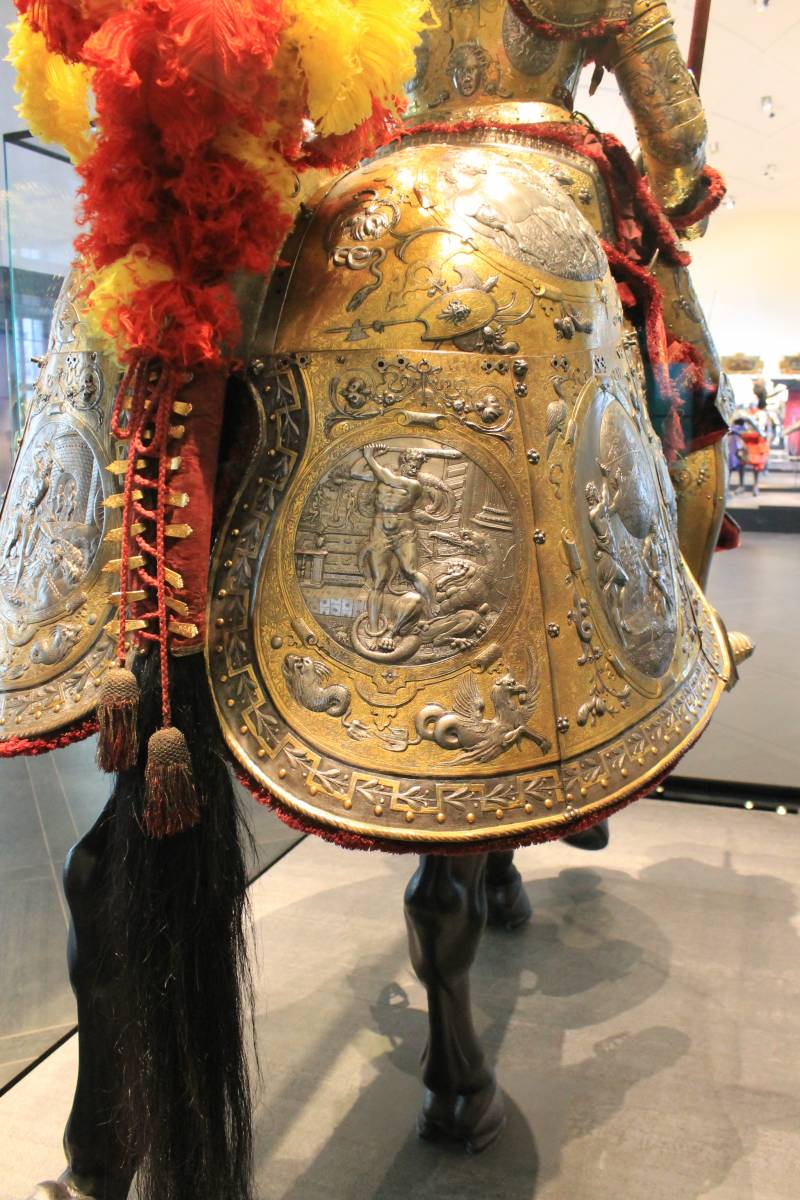 What monster is Hercules dealing with here? But with the one to whom they gave the princess Hesion, the daughter of the Trojan king Laomedont. Her father was forced to sacrifice her to the sea monster, which Poseidon sent to the city, and Hercules killed him and saved the girl! Photo of the author
The taming of the horses of Diomedes takes place on the upper right side of the head, and in the same place the abduction of Geryon's bulls. Moreover, it is funny that for some reason the exile of the centaurs is depicted on the central medallion of the horse breastplate: and this story, connected with the wedding of Pirithous, the king of the Lapiths, does not belong to the canonical exploits of Hercules. 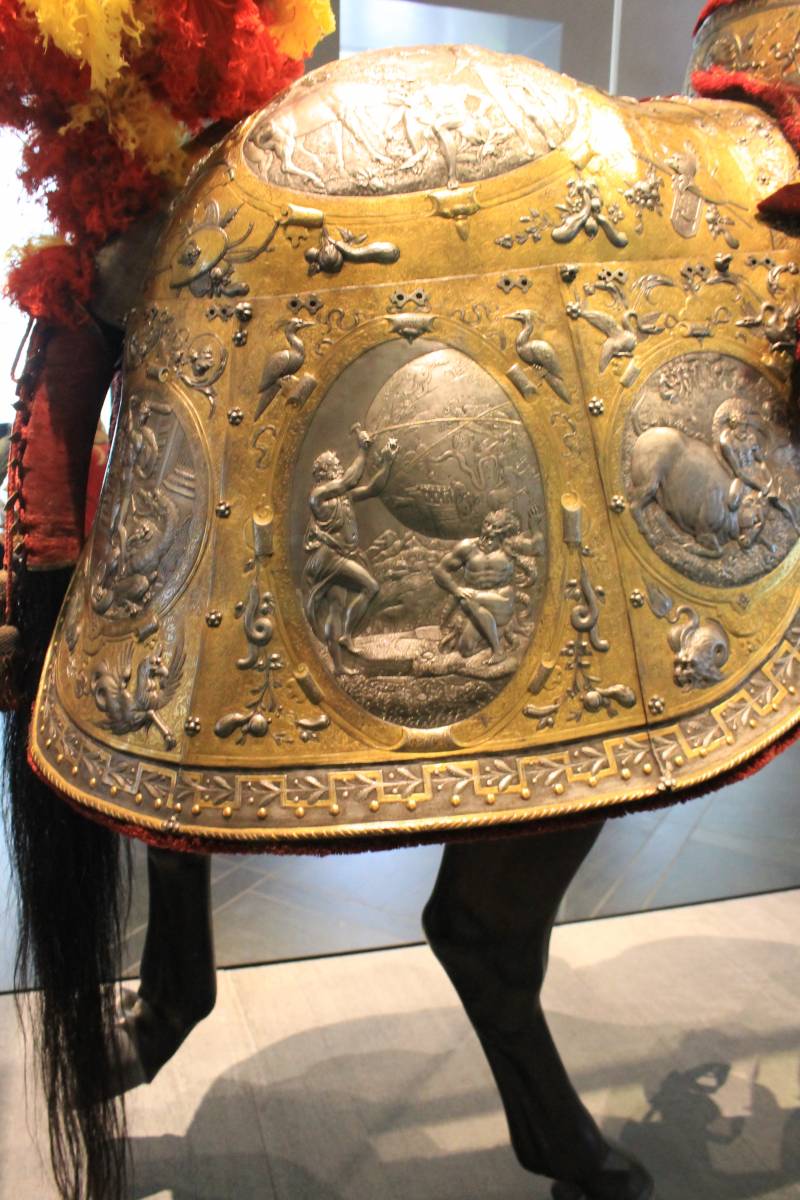 And here is the medallion on which we see Atlanta and Hercules - the latter undoubtedly depicts King Eric himself, who, with a crown on his head, nails a star into the sky in the constellation Leo - a clear allusion to his coronation in 1561! Photo of the author 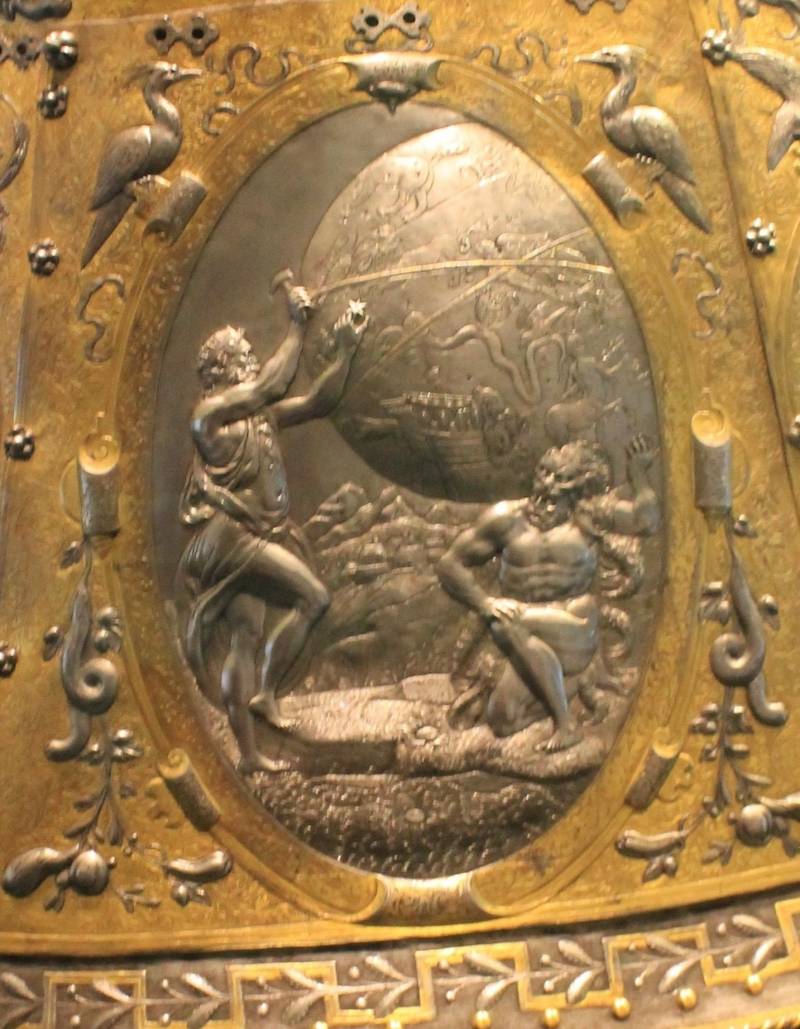 This is the same close-up image. Photo of the author
The image of the god of war Mars on the medallion on the right shoulder pad of knightly armor should symbolize strength, courage and cunning, and also hints at the then popular "theory" of the origin of the Swedes from ... the Trojans, on whose side Mars just fought in the Trojan War. 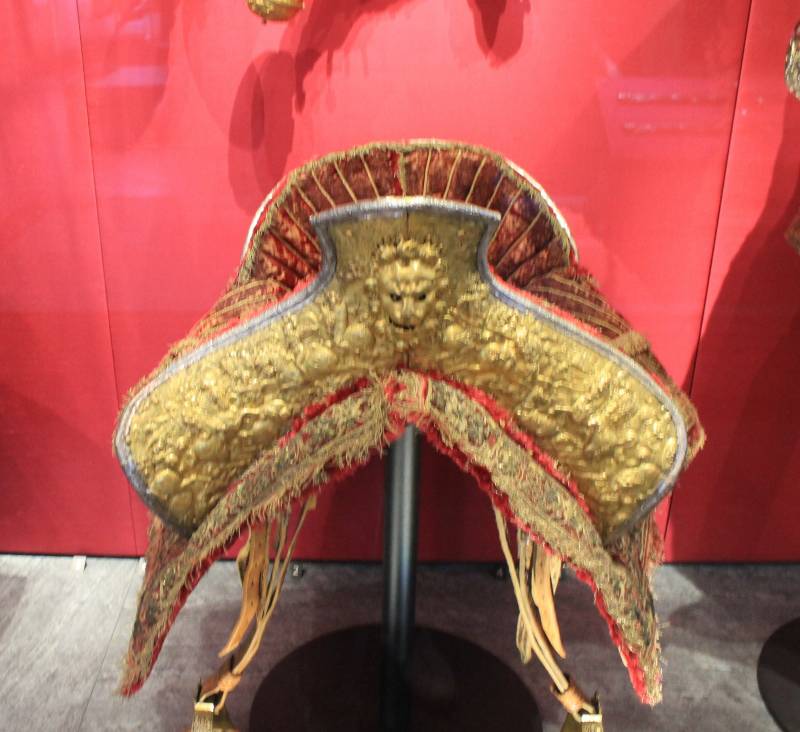 The armor set for the rider and his horse also included a saddle. The collection of the Dresden Armory contains many knightly saddles, decorated in a completely luxurious manner ... Photo by the author 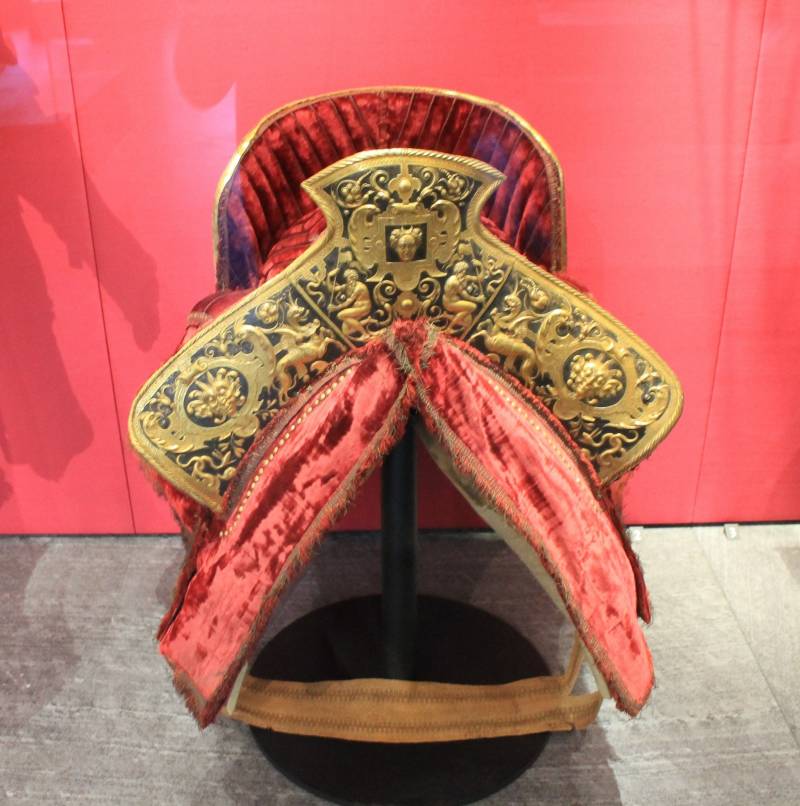 At the same time, the style of the saddle (and stirrups!) Exactly matched the design of the rider's armor and horse armor! Photo of the author
The winged horse Pegasus on the visor of the helmet arme should pay attention to the poetic gift of Eric XIV, because he was considered the patron saint of poets and rhetoricians. Here we see a direct allusion to the king's eloquence, so placing him on the visor near the mouth is not at all accidental. 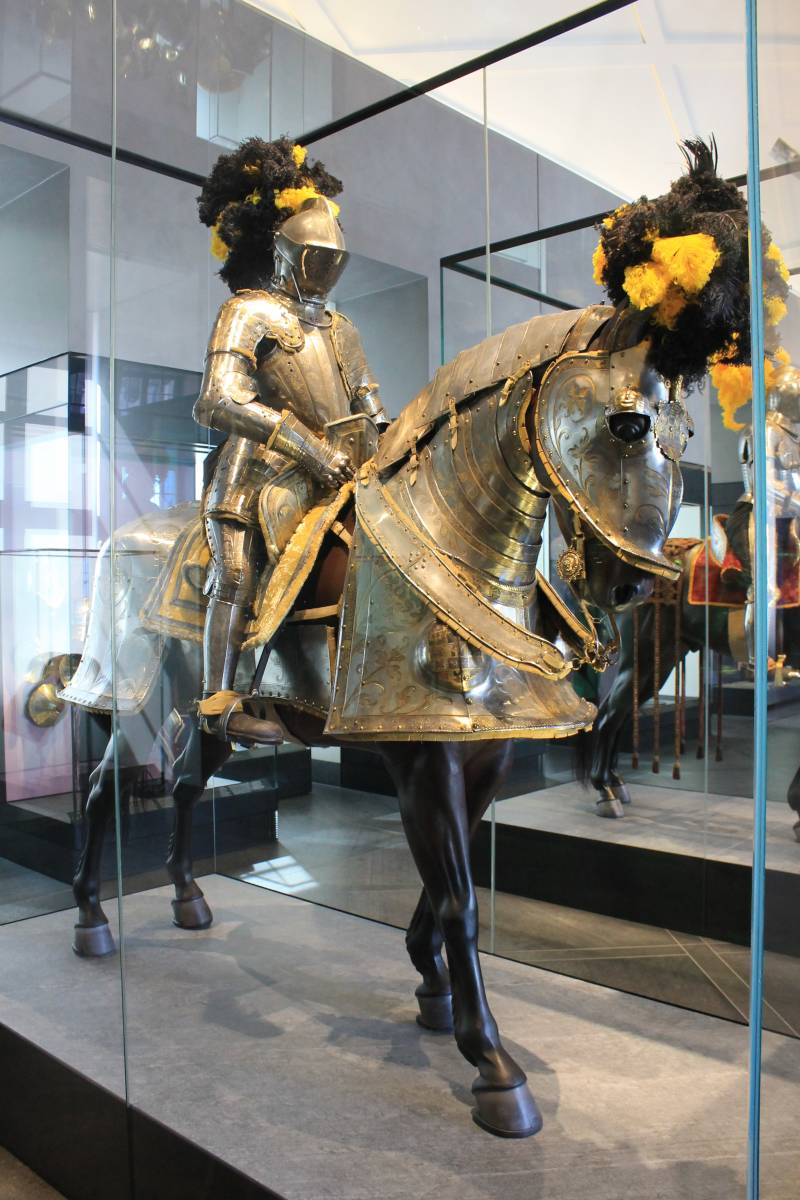 In general, in the Dresden Armory there is an astonishingly many beautifully made armor, and the "riders" dressed in them sit on equally beautiful, well, just like living horses! For example, one of such luxurious headsets is the ceremonial armor of Christian I of Saxony, made by master Anton Peffenhauser. And yet, the armor of King Eric XIV among them is probably the most beautiful! Photo of the author
That is, the armor of both the knight himself and his horse, with all available means of visualizing images, hinted at both the high and purely royal dignities of its owner. But ... it was with this armor that he was most unlucky. It's a shame that he never even saw him ...

PS About how armor was already used in antiquity as an important means of PR, you can also read in the "Military Review" in the author's article: "PR ancient shell».