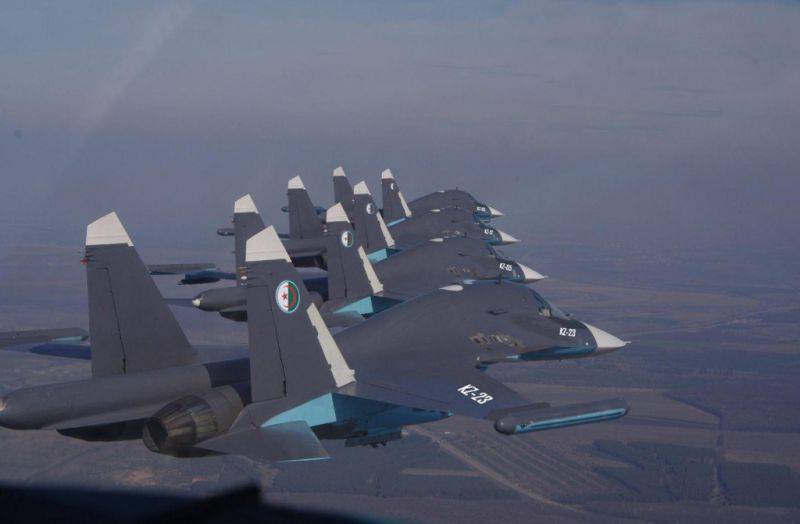 Algeria will become the first foreign buyer of the Russian front-line Su-34 bombers. According to the Dutch specialized aviation magazine Scramble in its online version, the first batch of aircraft will enter service with the Algerian Air Force by the end of 2021.

According to the newspaper, Algeria had previously negotiated with Russia on the supply of the Su-34, but it was not satisfied with the characteristics of the proposed export version of the aircraft. Instead of purchasing a new bomber, the Algerian Defense Ministry decided to modernize the Su-24 fleet.

The decision to purchase the Su-34 was made eight years after the negotiations began, which ended in failure. New interest in the Su-34 in Algeria arose after the use of these aircraft during the military operation of the Russian Aerospace Forces in Syria. Preliminary talks about intentions to purchase these bombers began in 2019 and continued in 2020.

According to scramble.nl, the first six Su-34s out of 20 ordered aircraft should enter service with the Algerian Air Force by the end of this year, the production of bombers is already underway. The remaining 14 bombers will be delivered in 2022 and 2023.

A batch of six planes should be ready by the end of 2021 and will be used to train Algerian pilots (instructors) and maintenance personnel. Training will begin in Russia from the beginning of 2022
- the magazine reports.

According to the magazine, the Algerian version of the Su-34 will have the designation Su-34ME and differ from the one used in the Russian Aerospace Forces only by the "friend or foe" system and communications. Everything else, including avionics and weapons, will be standard.

Earlier it was reported that Algeria intends to purchase Russian fifth-generation Su-57 fighters.

Ctrl Enter
Noticed oshЫbku Highlight text and press. Ctrl + Enter
We are
December 2010 years. Russian March. Senseless and merciless? Notes not a Russian personMedvedev and Bouteflika to discuss prospects for cooperation between Russia and Algeria in the military-technical sphere
Military Reviewin Yandex News
Military Reviewin Google News
106 comments
Information
Dear reader, to leave comments on the publication, you must sign in.