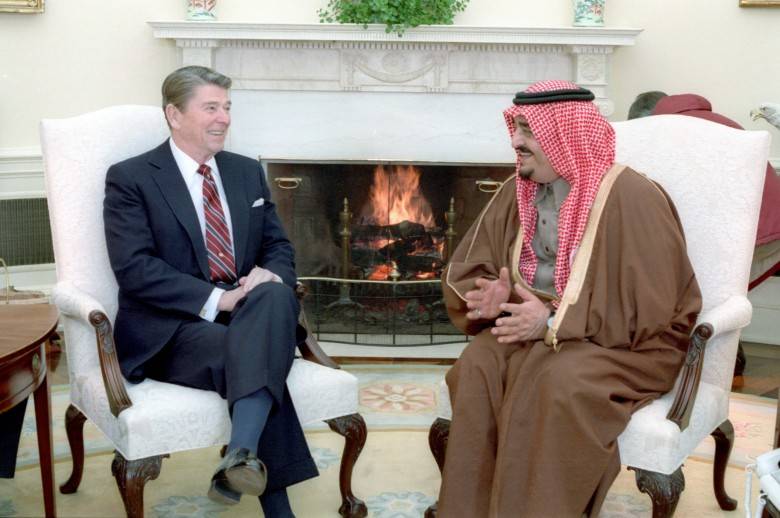 Ronald Reagan and King Fahd of Saudi Arabia at the White House, February 11, 1985

The late USSR began to rely too much on the purchase and copying of Western technologies. The logic was simple: we will sell oil, we will buy everything we need in the West.

It should be noted that the modern Russian Federation has fallen into the same trap since the 2000s, only the situation is much worse. Since even the late Union itself produced almost the entire range of goods and was the second industrial power of the planet.

This was noticed in Washington. And in 1981, the Reagan team (How the United States fought the "red bear") made a systemic conclusion: it is necessary to reduce foreign exchange earnings to Moscow from the export of hydrocarbons, to cut off the channels for the supply of modern technologies to the Soviet Union. Also make Russians spend more currency. To involve them in a new arms race, in local wars, in large spending on the allies.

Alliance of Forces of the Past Against Soviet Civilization

The Soviet Union, for all its shortcomings, manifested during the period of Brezhnev's "stagnation", which no one denies, was the world of the future. In Soviet civilization, the seeds of the society of the future ripened - a society of knowledge, service and creation. The USSR was on the verge of a breakthrough in the next era, which was slowed down first by Khrushchev's "perestroika" and then by Brezhnev's stabilization.

The symbol of Soviet society was an energetic, physically, intellectually and morally developed person. An intellectual and an athlete, penetrating into the secrets of the human psyche, knowing the energy of the atomic nucleus, designing settlements on the ocean floor, on the Moon and Mars, creating aerospace vehicles.

However, the old world, Western civilization, the capitalist system based on the enslavement of man by man, was not going to surrender without a fight. First, the dark genius of Hitler was thrown against the USSR, giving him control over almost all of Europe. The Red Empire held out, became even stronger. It expanded its boundaries, became a beacon of hope for all progressive humanity.

The West regrouped its forces and launched a new offensive on a sunny tomorrow. To the world of space rockets and cities shining among the taiga. A world where epidemics, hunger, poverty, unemployment and hopelessness have won. The world that gives people a dream.

The West started the Third World War - "cold", informational, ideological, historical, financial and economic. Secret war of special services and ideological attitudes. All remnants of the Middle Ages were thrown on the USSR in alliance with the world of capital. The Christian fundamentalists who came to power in America sang with the Saudi Wahhabis, fanatics of Pakistan, the Vatican and Israel. The union of the past came out against the world of the future.

Union of Saudis and Americans

At first, the Reagan team was able to find a common language with the richest, oil-bearing, but militarily weak Saudi Arabia.

The Saudis played a key role in the confrontation with the USSR.

There are the largest reserves of "black gold", which were ruled by medieval fanatics. At the same time, there is the world center of Islam, the keeper of the main Muslim shrines - the tombs of the Prophet Muhammad and the black stone of the Kaaba, which annually attract millions of pilgrims. When petroleum-based products became the main fuel in the world, Saudi Arabia began to sink in petrodollars. Became one of the richest countries in the world.

Saudi Arabia has become an important trump card for America. With the help of the Saudis, it was possible to lower world oil prices and deal a powerful blow to the USSR economy. By 1980, the price of oil on the world market peaked at $ 35 a barrel (adjusted for inflation, $ 93 at 2000s prices), and by 1986 it had dropped to $ 10 a barrel and below. Also, thanks to the Saudis, the United States has given new impetus to the war in Afghanistan.

The Americans were able to include Saudi Arabia in their sphere of influence back in the 1970s. With the help of petrodollars, the royal family and the ruling elite were tightly tied to the United States.

It all started when, in 1973, Arab monarchies decided to punish the West for supporting Israel. They announced an embargo on oil supplies to Western Europe and the United States. It did not last long, but the effect was notable. In the largest cities of the world, queues for gasoline formed, the authorities had to ban the use of personal vehicles for several days a week. Then oil supplies were resumed, but it was already worth four times more than before the Yom Kippur War in October 1973 (it rose from $ 3 to $ 12).

Western economies fell into crisis. Another crisis of capitalism began, which in the long term could bury the Western world. But the dollar rain poured on oil exporters. Especially Saudi Arabia.

Then the Americans realized that they needed an Arab "gas station".

They offered the Saudis a win-win lottery: you transfer billions of dollars back to the United States, invest them in American securities (government securities and shares of private corporations). Earn interest and enjoy luxury. The more Riyadh receives petrodollars, the more it returns to the United States and pours into the American economy.

In return, the Saudis received an American "roof", because there were many who wanted to rob rich sheikhs (in particular, Iraq, Syria, Iran). And the opportunity to build your own version of "oil capitalism" with elements of feudalism, such as an absolute theocratic monarchy with archaic customs and a slave-owning "pyramid", where all power and wealth belong to a handful of sheikhs, the indigenous natives are in chocolate, and all the rest are on bird rights, the second is third grade.

The Americans and other Westernizers built a modern state in the desert for the Saudis, cities with the latest infrastructure, the oil industry, factories, terminals, pipelines, harbors, ports, power plants, water treatment plants, a network of roads and airports. Ultra-modern clinics, hotels, supermarkets and entertainment centers have appeared in cities. The market was inundated with the best goods from Western Europe, the USA and Japan.

At the same time, the Arabs themselves did not even work. All the dirty work for them was done by hundreds of thousands of workers from poor Arab and African countries, from Asia. In just a few years, Arabia has changed dramatically.

This is how the Saudis, “zealots of the true faith,” sold themselves to the American “golden calf”. To the godless American shaitan who saved Israel, hated by Muslims.

In theory, the faithful Saudis should have rejected this deal. But, apparently, money doesn't smell. The Saudi elite sold out. So, the Americans tied Riyadh to themselves. All the capital of the Saudis was in the United States. And Arab sheikhs became vitally interested in strengthening America.

Under Reagan, the relationship with Riyadh was maintained by CIA chief Bill Casey.

He was in close contact with the head of Saudi intelligence, Turki al-Faisi. He was in a warm relationship with D. Bush Sr., vice president under Reagan.

The Saudis were militarily vulnerable. The combat capability of their troops was extremely low, which remains to this day, despite the fact that the armed forces are equipped with the best weapons the world (including the United States and Western Europe).

From the north, a hostile, Shiite Iran was threatened, where the Saudis are considered traitors to the holy cause of Islam. The Iranians wanted to perpetrate the Islamic revolution in Arabia in their own way, to plant a friendly regime in Riyadh.

In the south was South Yemen, the People's Democratic Republic of Yemen, friendly to Moscow. The Yemenis believed that the Saudis had taken away part of their historical territory. And they wanted to get her back. These lands were rich in oil. At the same time, the Yemeni tribes, unlike the Saudis, had a fairly good fighting capacity, fighting spirit.

Also, part of the wealth of Arabia was not averse to taking away Iraq. Opposition existed within the kingdom, which dreamed of staging a coup and coming to power. She relied on the support of Iran and Syria.

The United States provided Saudi Arabia with military security, giving guarantees that in the event of a threat, the American Rapid Reaction Forces (300 thousand groups with their command, intelligence and communications) will come to the rescue. Rearmed their army.

In return, the Saudis joined the fight between the United States and the USSR, increased oil production, knocking down world prices for "black gold".

On the other hand, the lower the oil prices, the less incentives Western Europe has to buy natural gas from Russia and pull gas pipelines from the USSR. The Saudis will keep the market in Europe.

Also, the Saudis, together with the Americans through a network of "charitable organizations" began to finance the war in Afghanistan. Help Afghan spooks who fought with the Russians. Also prepare plans for the creation of an anti-Russian Muslim underground in Russian Turkestan, in the future in the Caucasus and the Volga region.

Since that time, the project "Islam against Russia (Russians)" has been launched.

It is worth noting that the Americans inherited Britain's plans to create an arc of instability along Russia's southern borders.

In the 1970s, US Secretary of State Henry Kissinger put forward the idea of ​​an uprising in Russian Central Asia (Turkestan of the Russian Empire), the revival of the Basmach movement. Deploy an anti-Russian movement on the basis of Islam in Uzbekistan, Tajikistan and Turkmenistan, throw the fire of war in Kyrgyzstan and Kazakhstan, then blow up the Caucasus and the Volga region.

These plans coincided with the aspirations of the Saudis. With the help of the Anglo-Saxons, they manufactured an "export commodity" - "black" Islam, blood-cruel and irreconcilable, flavored with dollars, weapons and terrorists. This is how "world terrorism" was born.

And this happened even before the start of the war in Afghanistan! Even then, the West (mainly the secret services of the United States and Britain), in alliance with Saudi fanatics, was preparing to blow up Russian Turkestan. These were the origins of the bloody civil war in Tajikistan in the early 90s.

Then Wahhabism and terrorism penetrate into Chechnya and Dagestan, the price will be terrible. Two wars in Chechnya.

In Europe, Kosovo will become a hotbed of inferno. Religious fanatics and the drug mafia will support the Kosovar gangs, which will begin to slaughter the Serbs, clearing them from ancient Kosovo. Again, as under Hitler, the Slavs will perish, the ancient Orthodox churches and monasteries will burn.

It is interesting that at present the interests of the Anglo-Saxons, Muslim radicals (“black caliphate”), and the drug mafia are still closely intertwined in Central Asia.

Post-Soviet Turkestan is severely degraded and prepared for an explosion.

The fire is aimed at the southern borders of Russia.

Ctrl Enter
Noticed oshЫbku Highlight text and press. Ctrl + Enter
We are
What you didn't want to know about EnglandTatarstan authorities will restore order in the republic - Sharia
Military Reviewin Yandex News
Military Reviewin Google News
60 comments
Information
Dear reader, to leave comments on the publication, you must sign in.