The nuclear triad is in the red: how Russia is threatened by the technological lag of the United States 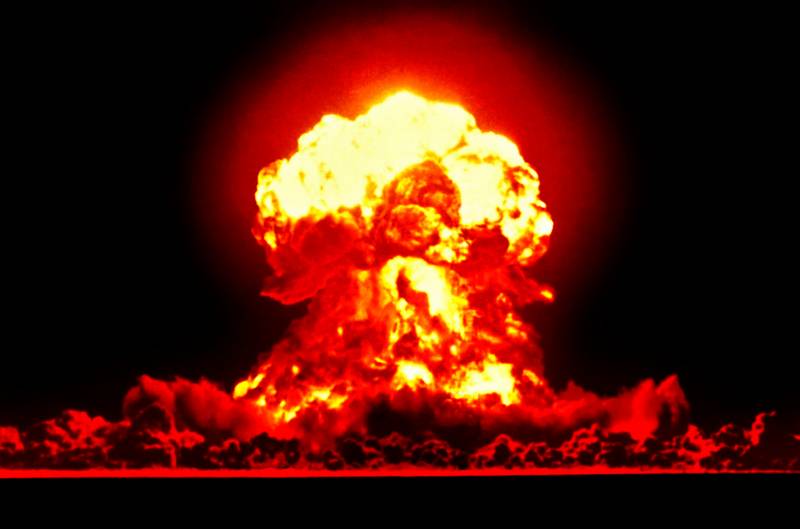 The arms race of the two superpowers, which is currently unfolding, seems much more dangerous than the confrontation between 1945-1989. In the last century, the Soviet Union and the United States, even in the most acute periods, were able to talk with each other, as well as conclude treaties on the control of nuclear potential. Now the situation of deep mistrust is aggravated by the emergence of new means of delivery of nuclear weapons capable of changing the balance of nuclear forces on the planet. 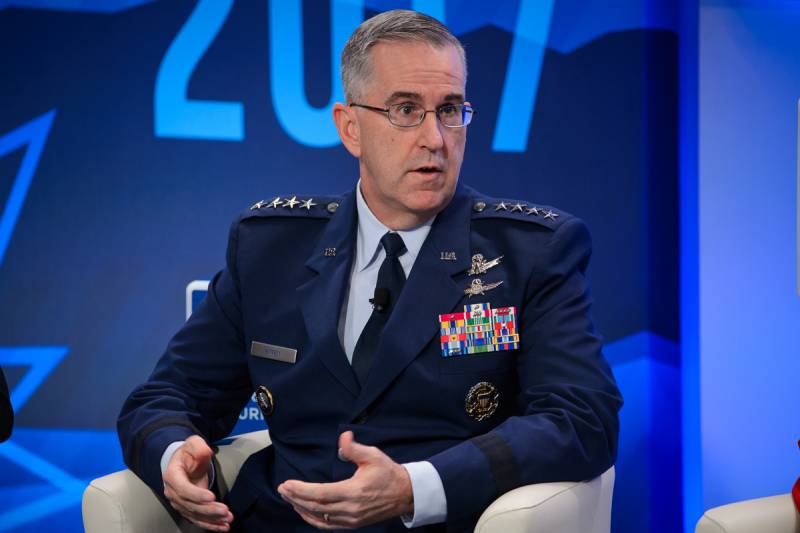 John Hayten is dissatisfied with the pace of modernization of the US nuclear potential and the strategy of containing Russia. Source: Halifax International Security Forum
Logic suggests that the least secure in this stories Russia must remain - after all, the country's economic potential is much weaker than the American one.

And in conditions when the superpowers cannot agree on mutual control, the party with limited financial resources loses first of all. But against all odds, the first signs of defeatism are in the United States.

The deputy head of the Joint Chiefs of Staff of the US Armed Forces, General John Hayten, at the last briefing at the end of February, complained about the lag behind Russia in the field of nuclear weapons... According to Hayten, Russia is already finalizing the modernization of its nuclear deterrent, and the United States is just beginning to move in that direction. At the same time, in order to simply achieve technological parity with Moscow, the Americans will need at least a decade.

As a roadmap for overcoming a critical situation, the general proposes to put into service more effective sea-launched cruise missiles with nuclear warheads. For underwater fleet low-yield tactical nuclear warheads are needed, designed for limited strikes on the territory of Russia and China.

There is such a delusional concept at the Pentagon, created around the de-escalation of a non-nuclear conflict with several low-power nuclear strikes. American strategists either do not want to think about the extremely high probability of a local nuclear war turning into a global catastrophe, or they deliberately mislead others. Russia and China will respond with a 100% guarantee to a nuclear strike on their own territory of any force at least in a mirror image, and, most likely, will initiate a world war. 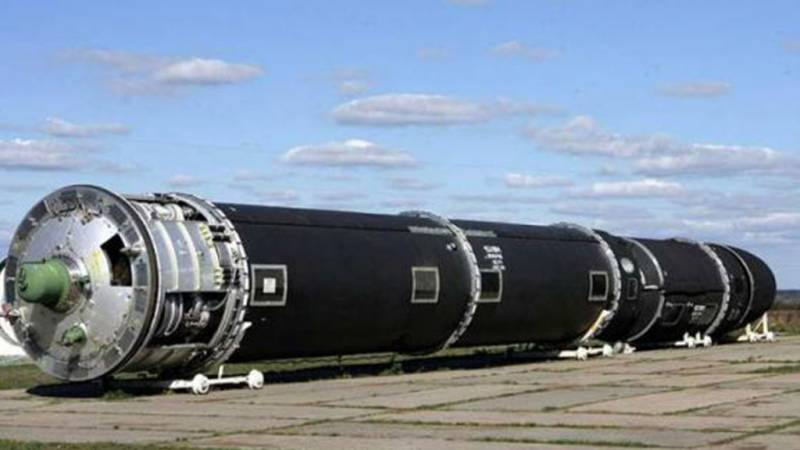 ICBM "Sarmat". Source: dfnc.ru
In addition to the above, the American military, like air, needs the main weapon mainstream of recent times - hypersonic missiles. The Pentagon is seriously concerned about Russian and Chinese successes in this area.

The Americans predict the appearance of such systems in their home countries only by the mid-2020s. And this is the best case. It will also be necessary to spend money on protection against hypersonic missiles of a potential enemy. Military experts plan to commission such equipment no earlier than the end of this decade.

It is not entirely clear on what technologies the Americans are going to build a hypersonic missile defense system, even if the existing one teases the enemy rather than effectively protects against a massive strike.

The most fantastic thing in this case will look like the fight of American interceptor missiles with the Avangard hypersonic units from the Sarmat complex. According to open data, Avangards will be able to develop up to 27 Mach numbers.

But the Pentagon does not intend to end with hypersonic sound. The final element of Russia's nuclear deterrent system is reusable hypersonic systems, which are expected to appear in 12-15 years. It is worth emphasizing that these are very optimistic scenarios of technological development for the United States.

In recent years, the colossal money spent on modernizing the nuclear deterrent have not produced tangible results. As Americans spend years making up for lost time, Russia will make significant headway in the most critical areas of hypersound and asymmetric threat.

Military expert Alexei Leonkov believes that the Pentagon in the near future, in general, will not be able to catch up with Russia in the field of hypersound. Even taking into account the excess funding.

However, there are many pitfalls for both the United States and Russia.

The most modern in the world

The domestic Strategic Missile Forces have indeed made a qualitative breakthrough in recent years - by the end of last year, the share of new and modernized weapons amounted to 81%. According to plans, by 2024 the strategic forces will be re-armed by 100%.

It is important to understand that most of the "updates" do not supplement the existing systems, but only replace them.

For example, mobile complexes "Yars" are put into operation instead of the well-deserved "Topols", and heavy "Sarmatians" are intended to replace missiles of the "Voevoda" type in the silos.

This approach is doubly effective.

First, it is much cheaper than a simple quantitative build-up.

And secondly, formally it does not give potential opponents a reason to accuse Moscow of militarism. Russia may even hope for beneficial new treaties within the framework of strategic offensive arms, since formally neither Sarmat, nor even Avangard are hindering this.

The same cannot be said about the Poseidon nuclear underwater drone and the Burevesnik cruise missile with a nuclear power plant. Actually, it is because of these promising types of weapons that the Americans are sounding the alarm. Further development of such weapons, and, moreover, putting them into service, will not at all contribute to mutual control over nuclear weapons.

As you know, Russia intends to deploy at least 32 super torpedoes on Belgorod-class submarines. And the first Poseidons are obviously already assembled. However, the true purpose of developing such a formidable device is still not fully understood.

Russia with three missile armies and 12 divisions of the Strategic Missile Forces is capable of inflicting so-called unacceptable damage to the United States in any development of events.

According to the National Research Institute of World Economy and International Relations named after E.M. Primakov (NII MEMO) RAS, even after a massive disarming strike from the United States, Russia will have up to 700-750 megaton missiles.

Therefore, the existing status quo can only force a suicidal madman to strike first - a totally fatal response is guaranteed.

And now "Poseidon" and "Petrel" appear on the scene, which do not fall under the current and prospective restrictive treaties. Russia, even without these devices, guarantees a nuclear deterrent to the United States.

Some analysts refer to a hypothetical technological breakthrough that the United States is about to make. And, finally, they will create an extremely effective missile defense system. And, they say, it is "Poseidon" that will be the last chance for guaranteed retribution. But, given modern realities and the dubious achievements of Americans in hypersound, this option is hard to believe.

In this regard, expert Vladimir Dvorkin from Research Institute MEMO gives a very interesting example from the past.

In the second half of the 1970s, the USSR began to develop the Kaskad and Skif orbital anti-satellite stations with missile and laser weapons. In 1985-1986. they were supposed to be tested. But the military suddenly abandoned this idea. But not for technological, but for political reasons.

Analysts managed to convince the Department of Defense of the danger of provoking the United States. There were not so many bonuses from the anti-satellite "Cascades" and "Scythians". But the potential for an asymmetric response from the Pentagon could be very unpleasant for the USSR.

At the present time, the proclaimed by the Americans their own technological backwardness for Russia is not at all like honey in its soul.

First, the United States will look for an answer to the Poseidons with the Petrels and, most likely, will find it in the foreseeable future. And this is a new round of the ruinous arms race.

Secondly, promising types of nuclear weapons do not fit into the concept of START treaties and may become a reason for curtailing the remnants of dialogue between countries.

And finally, thirdly, feeling vulnerable, the United States may well decide in a crisis situation to preemptively strike Russia with all the ensuing consequences.

The world order in the second half of the last century was based on strict bipolarity. Everyone knows what happened when the Soviet Union was unable to oppose the United States. Even so, in the 90s, the Americans did not have a technological advantage in the nuclear field.

And now the ball seems to be on the side of Moscow.

And the consequences of this can be unpredictable.

Ctrl Enter
Noticed oshЫbku Highlight text and press. Ctrl + Enter
We are
Situational analysis of the death of the MH17 flight (Malaysian Boeing 777), made on the basis of engineering analysis from 15.08.2014Strangulation: the context, conduct and consequences of the American naval blockade of China
Military Reviewin Yandex News
Military Reviewin Google News
290 comments
Information
Dear reader, to leave comments on the publication, you must sign in.