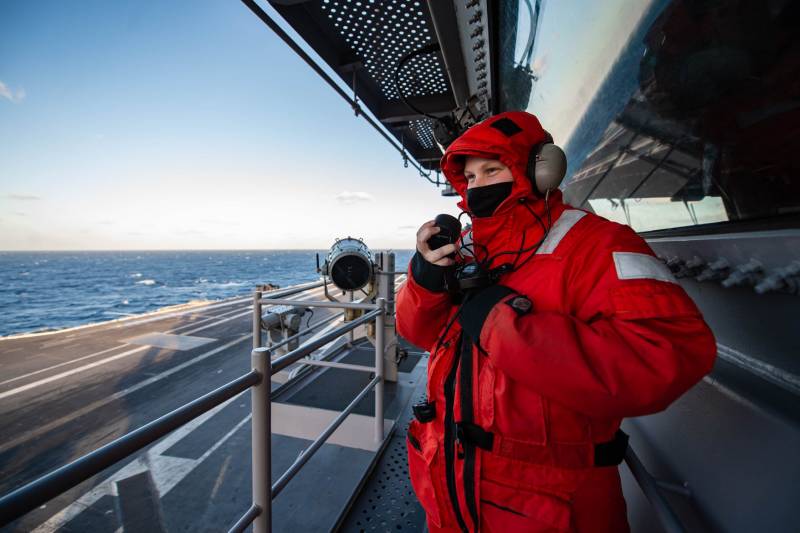 In the United States, they are testing new capabilities for aircraft carrier strike groups (AUG). The Pentagon is primarily interested in the possibility of updating the logistics of servicing aircraft carriers, including the issue of restocking the AUG.


The American press reported that the other day (February 21) a demonstration was held in the US Navy, during which a drone with vertical take-off and landing capabilities delivered some equipment to the aircraft carrier Gerald R. Ford. We are talking about the unmanned system BWML (Blue Water Maritime Logistics).

This unmanned system delivered what the Navy describes as "light logistics equipment."
What exactly was delivered on board the American aircraft carrier, as well as the weight of the cargo, is not reported.

The drone flew from Patuxent River Base in Maryland to Norfolk Base in Virginia, where the aircraft carrier is currently located. The covered distance was about 200 km.

U.S. Rear Admiral John Meyer, Commander aviation component of the Atlantic segment of the US Navy:

This demonstration of UAV capabilities showcases cutting edge technologies to improve our logistics efficiency. We have come a long way in integrating drones into naval aviation, taking into account all the lessons that can accelerate the development of such potential.
UAV Blue Water - one of the versions of the hybrid design, created by the Texas company Skyways. The drone is said to be capable of being controlled by artificial intelligence, has a maximum flight range of 800 km, and is capable of carrying a payload of up to 14 kg. He is able to fly autonomously between given coordinates. At the same time, it is capable of delivering cargo both by landing on the deck of the ship and by simple dropping.

In the future, it is planned to use dozens of such unmanned systems simultaneously for a thorough replenishment of AUG stocks.

Ctrl Enter
Noticed oshЫbku Highlight text and press. Ctrl + Enter
We are
Reports from the militia of New Russia for 27-28 September 2014 of the yearYuri Drozdov: Russia prepared the role of the sacrificial calf
Military Reviewin Yandex News
Military Reviewin Google News
50 comments
Information
Dear reader, to leave comments on the publication, you must sign in.