Cartridges for the Wehrmacht: production in occupied countries 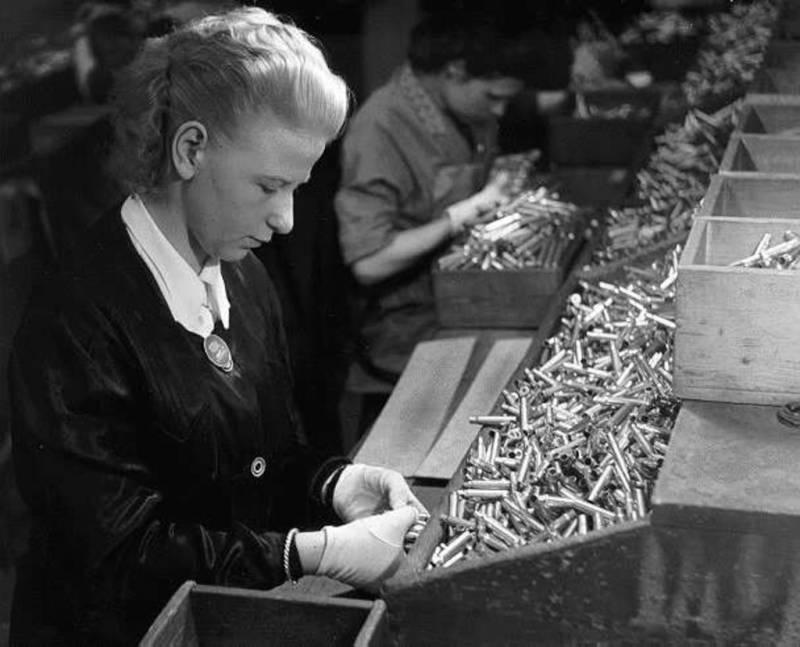 There are already few military photographs, and even fewer factories and plants in the occupied countries. Therefore, German photographs were used for illustration.

When discussing my articles about various finds among German trophy documents, the topic often arises: "All of Europe worked for Hitler." As it arises, so, however, and disappears, since the followers of Comrade. Episheva can say little in detail about how exactly all of Europe worked for Germany, what it produced, and in general how the economy of Europe was structured during wartime.

Meanwhile, the details are quite interesting. In the fund of the Reich Ministry of Economics in the RGVA there is a case dedicated to the placement of German orders in occupied countries from 1941 to 1943. It's a delicate matter, literally a few sheets in it. But these are reference tables that the ministry compiled for a general overview of the placement and execution of German orders. Data for each country was disaggregated by product type: ammunition, weapons, cars, ships, aircraft, communications, optical instruments, clothing, industrial equipment and machinery, military equipment and consumer goods. From this table, one can judge what exactly was produced in each occupied country and in what volume.

All data are given in Reichsmarks. This, of course, is not very convenient, because, without knowing the price list, it is difficult to translate the volume of production in Reichsmarks into quantity. However, knowing the German punctuality, one must assume that somewhere in the archives, most likely in Germany, there are order documents with the corresponding quantitative data.

Weapons and ammunition were made by almost all occupied countries

I was most interested in information about the production of ammunition and weapons. I even made a separate statement for these categories of orders from all tables.

Without data on the range of orders, it is difficult to say what exactly was produced there. It can be assumed that these were the simplest and most popular types in production: rifles, machine guns, pistols, cartridges, grenades, mortar mines, shells for field artillery. Obviously, the production was carried out by arsenals and factories that had previously worked to supply the armies of the occupied countries.

As you can see, the Germans in the occupied countries ordered quite a lot of weapons and ammunition. This table in itself undermines the assurances available in foreign literature that the Germans did nothing but plunder the economies of the occupied countries. This was not entirely true. Along with robbery and exploitation, it was a very profitable business for a certain group of firms and their owners, especially in Western Europe, to fulfill German orders.

You can roughly estimate how much weapons and ammunition these countries produced. In 1942, the Mauser K98k rifle cost 60 Reichsmarks, and 1 pieces of 000 mm cartridges cost 7,92 Reichsmarks or 251,44 pfennigs apiece. Thus, in our conditional calculation, each million Reichsmark orders for weapons was equivalent to 25 rifles, and each million Reichsmarks orders for ammunition - 16 million cartridges. It turns out that we can assume that, for example, Holland in 667 supplied 4 thousand rifles and 1941 million cartridges, Denmark, for example, in 150 - 60 thousand rifles, Norway in the same 1941 - 166,6 thousand rifles and 1941 million rounds.

In 1941, weapons worth 76 million Reichsmarks were supplied from the occupied countries, which, according to our conditional calculation, is equivalent to 1 thousand rifles and ammunition for 266,6 million Reichsmarks or 116 million cartridges. This, I must say, is decent. For now, we will restrict ourselves to the moment when documents on a specific nomenclature of production and supplies are found.

The dynamics of production is also interesting. In 1941 and 1942, some countries tried hard and supplied more than they were ordered. For example, in 1941 Norway supplied both weapons and ammunition more than they received orders. Belgium and Northern France tried very hard (probably to a greater extent Belgium, which was a large arms manufacturer before the war). Arms deliveries significantly exceeded the volume of orders. 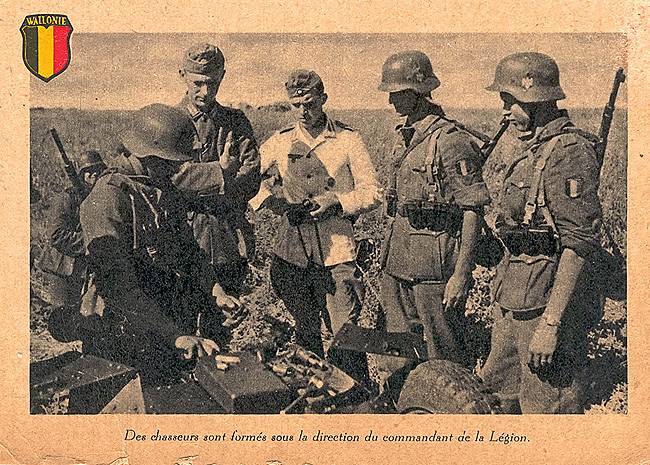 If the Belgians went to the SS, then working for the Germans in military factories was not at all considered something reprehensible.
But in 1943, labor enthusiasm abruptly gave way to decline. Most countries stopped fulfilling German orders for weapons and ammunition in full. France, which in 1942 completed almost all orders, especially for ammunition, in 1943 made less than half of the ordered weapons and less than a quarter of the ammunition. Denmark and Holland did not fulfill ammunition orders at all. Even Norway has cut production. Of course, this can be explained by the lack of raw materials, materials and fuel, the intensified selection of labor to Germany. But still, I think that the political moments were in the first place here. After the defeat at Stalingrad at the end of 1942, the news of which spread throughout Europe through the efforts of the underground, industrialists in the occupied countries became thoughtful. Money, of course, doesn't smell. But if Germany stopped winning, then her end was not far off. The arms manufacturers understood better than others the alignment of forces in the world war and realized that Germany, having lost the initiative, would inevitably be crushed by a coalition of allies. If this is so, then they have nothing to try so that after the war they could say: we were forced, and we disrupted and slowed down war production as best we could. 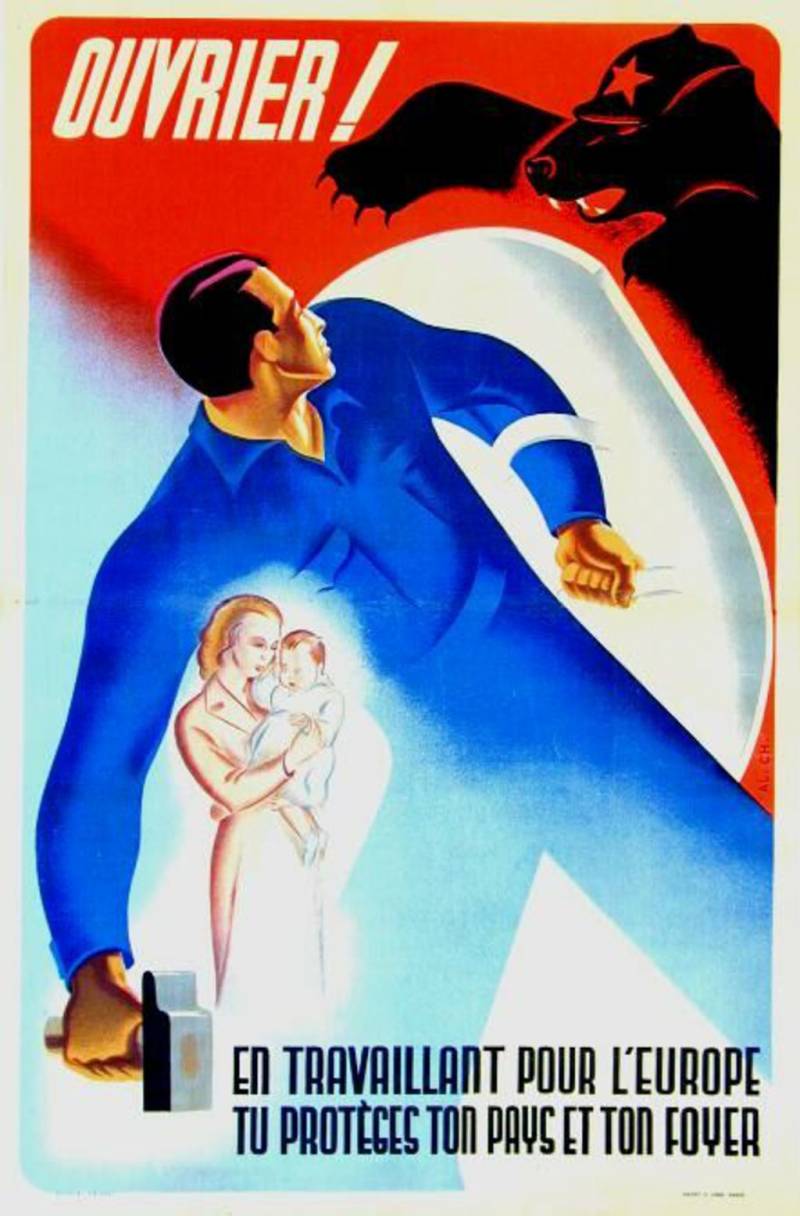 1943 poster. The French were persuaded to work, intimidated by Bolshevism
Switzerland ended up on the list of arms and ammunition manufacturers for Germany in 1943 because it bought off Hitler and avoided occupation, and was in dire need of German coal.

As for the production of weapons and ammunition in Greece, it is still difficult to say what it was. Most likely, the Germans managed to create factories there and start production. Greece in 1943 supplied products for a whopping 730 million Reichsmarks. This was mainly shipbuilding. But I have not yet been able to find more accurate data on this.

In the General Government of Poland, all production at the beginning of 1940 passed into the hands of the Germans, and they tried to turn Polish factories into large arsenals. Poland in 1942-1943 was perhaps the largest producer of weapons and ammunition of all the occupied countries. True, this page is his stories Poles after the war diligently did not want to remember and got off with the most general mentions. This is understandable, since production could not do without the participation of Polish workers. Poland produced goods for Germany in 1941 for 278 million, in 1942 for 414 million, and in 1943 for 390 million Reichsmarks. In 1943, 26% of Polish production for German military orders came from ammunition.

So the situation with the fulfillment of German orders in the occupied countries was somewhat more complicated than it might seem at first glance. Yes, they produced a significant amount of products, tangible even on the scale of general German production. At the same time, the regime in different occupied countries was different, collaboration was both voluntary, based on profit, and forced (the involvement of the Greeks in military production was greatly facilitated by the severe famine that broke out in the country soon after the beginning of the occupation), and the attitude towards the Germans and work for them, as we can see, changed greatly under the influence of the situation on the fronts.