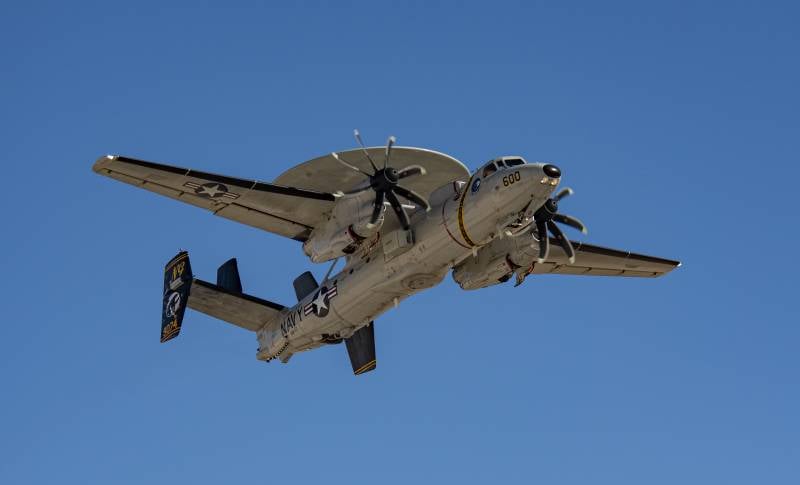 Paris continues to renew its aircraft carrier fleet aviation their own Navy. This time, the orderly outdated and worn-out carrier-based early warning and control aircraft (AWACS) E-2C Hawkeye are subject to replacement.

They will soon be replaced by a trio of modernized aircraft of this class - the E-2D "Advanced Hawkeye" aircraft, designed and manufactured by Northrop Grumman.

The contract is signed

The US State Department approved the sale of these aircraft to France in July 2020, and the final documents on this issue - the Letter of Offer and Acceptance - were signed by the French Ministry of Defense with their overseas counterparts on December 2, 2020 (the aircraft are being purchased through the US Department of Defense).

Thus, Paris became the second foreign customer of this type of aircraft - earlier, 13 units of them were purchased by the Japanese Self-Defense Forces (the contract value is about $ 3,135 billion, deliveries of the machines began in 2019).

According to the information provided in communicationposted on July 6, 2020 on the website of the Defense Security Cooperation Agency (DSCA), under this contract, the French military requested permission to purchase the following weapons, military equipment and property:

- one set of the Joint Mission Planning System.

In addition, within the framework of the contract, it is planned to supply two unified systems integration laboratories with the corresponding test equipment (Common Systems Integration Laboratories with / Test Equipment). One of them will be located in Melbourne, Florida, and the other in France. Plus various equipment and gear for flight and ground technical personnel, necessary auxiliary equipment and spare parts, components and assemblies, technical documentation, various training equipment, etc.

It is also planned to provide the French military with all the necessary assistance in terms of providing delivery services and technical, engineering, and logistics support - the solution of this task will be entrusted to the US government and the contractor.

"The planned delivery will support the foreign policy and national security of the United States by enhancing the security of a NATO ally, which is an essential element in ensuring political stability and economic progress in Europe,"
- emphasized in the statement of the US Defense Ministry's Agency for Military-Technical Cooperation.

“By providing naval aviation (the French Navy) with the opportunity to increase its combat potential by replacing its outdated E-2C Hawkeye aircraft, this delivery will increase France's potential to counter current and future threats. The E-2D aircraft will provide further development and capacity building of naval aviation and ensure the maintenance of compatibility with the US Navy. "
The value of the contract under consideration is announced at about $ 2 billion.

The delivery of all ordered vehicles is planned to be completed by 2028. After that, the three old Hokai in service will probably be scrapped. 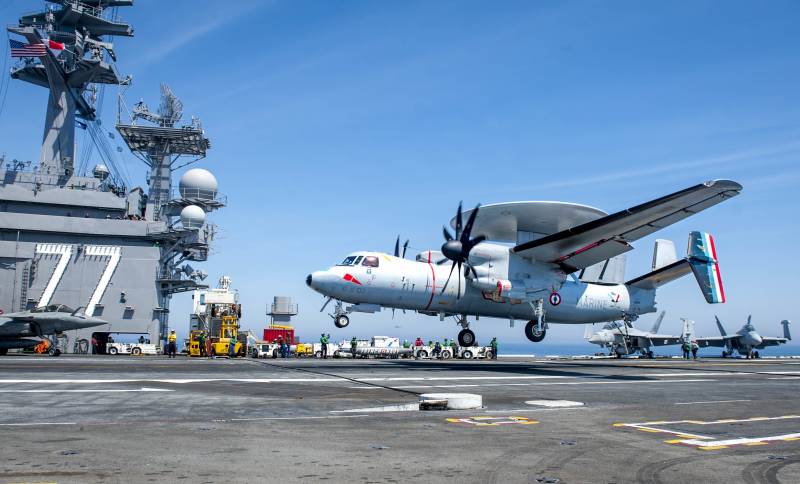 The French E-2C Hawkeye, assigned to the 4F squadron of the French Navy, lands on the deck of the nuclear-powered aircraft carrier George G.W. Bush". May 11, 2018 (US Navy photo by Mass Communication Specialist 3rd Class Brooke Macchietto / www.navy.mil)

In the interest of ensuring interoperability

“The E-2 / P-2 Program Division looks forward to continuing the long-standing partnership with France and the start of a new chapter in stories E-2D programs. These purchases will enhance interoperability between the US fleet and international partners ",
- cited, in turn, the words of Captain Pete Arrobio (Capt. Pete Arrobio), head of department PMA-231, in press release United States Naval Aviation Systems Command (NAVAIR) posted on their website on January 5, 2021.

This department is responsible for the full and comprehensive support of the programs of carrier-based AWACS aircraft of the types E-2C Hawkeye, E-2D “Advanced Hawkeye” and “Hawkeye 2000”, as well as carrier-based military transport aircraft C-2A “Greyhound”.

It should be noted that the words about increasing the interoperability of the fleets of the United States and their partner countries are not just a tribute to fashion, but a statement of fact: the US Navy is making active efforts to increase such compatibility and for this purpose it regularly organizes joint exercises and exchange of experience with the military maritime forces of countries considered to be allies or partners in the field of security.
So, in May 2018, the air group of naval aviation of the French Navy, consisting of several carrier-based fighters "Rafale M" (Rafale M) and AWACS aircraft E-2C "Hawkeye" carried out temporary base on the American nuclear-powered multipurpose aircraft carrier "George G.W. Bush "(USS George HW Bush, CVN-77), during which she conducted joint combat training activities with her American counterparts. From the latter, in addition to the aircraft carrier itself, the aircraft of its wing took part - the F / A-18E-F Super Hornet fighters and the E-2D Advanced Hawkeye AWACS aircraft.

Moreover, for the French in this event there was a double benefit, since at that time they were not able to fly from their own aircraft carrier - it was under repair. 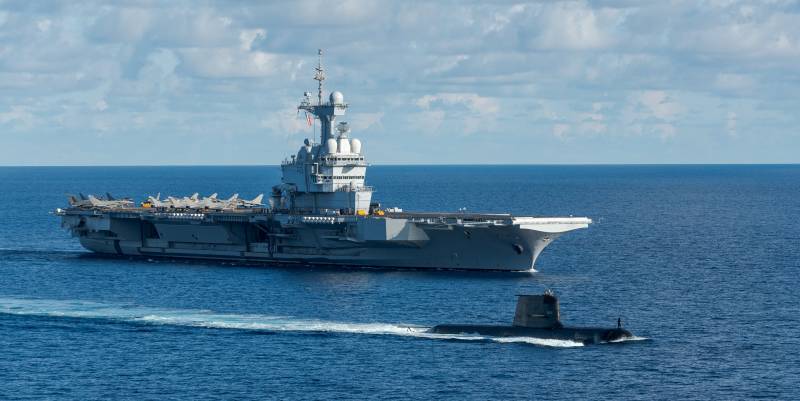 French nuclear-powered multipurpose aircraft carrier Charles de Gaulle and Australian diesel-electric submarine Collins (HMAS Collins, SSG 73) in the Bay of Bengal during joint exercises. May 22, 2019
(US Navy photo by Mass Communication Specialist 2nd Class Jimmy Ong / www.navy.mil)
In conclusion, we add that the modernization of the fleet of aircraft carrier aircraft of the French Navy is carried out, including with an eye to the future.

As stated on December 8, 2020 during a visit to Framatome (one of the world leaders in the field of nuclear energy), French President Emmanuel Macron,

The country's military and political leadership made a fundamental decision to build a new generation nuclear multipurpose aircraft carrier, which at the turn of 2038 is to replace the FS Charles de Gaulle (R91) nuclear-powered ship that has been in the ranks of the French fleet for many years.
The work on the new floating airfield will be carried out within the framework of the Porte Avion Nouvelle Generation (PANG) program, which can be translated from French as "New Generation Nuclear Aircraft Carrier". The first metal cutting is scheduled for 2025 so far, and the ship's sea trials are scheduled for 2036.

Judging by the available images of the proposed appearance of the future flagship of the French carrier forces, this ship will no longer resemble the current (a kind of "intermediate") French nuclear-powered ship, but will become a classic multipurpose aircraft carrier capable of solving the widest range of tasks. 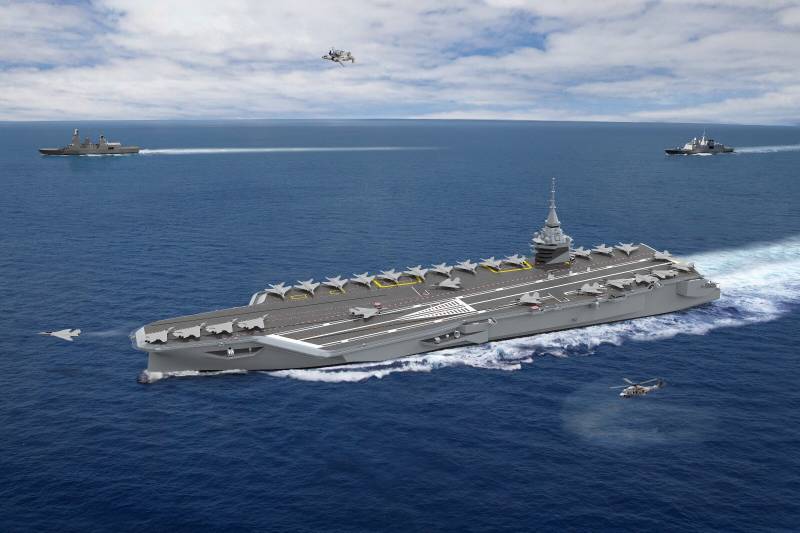 Estimated appearance of a promising French nuclear-powered multipurpose aircraft carrier under the PANG program
(Figure by Naval Group from the official account French Defense Minister Florence Parley on Twitter)
The greatest length of a promising aircraft carrier can reach 300 meters, the width of the flight deck will be about 80 meters, and the displacement should be about 70-75 thousand tons (more details about this project should be described in a separate article).

Naturally, the new aircraft carrier, which, by the way, is planned to be equipped with three electromagnetic catapults produced by the American company General Atomics, will also need new deck aircraft for various purposes. The acquired modernized "Hokai" at first are quite suitable for this.

Ctrl Enter
Noticed oshЫbku Highlight text and press. Ctrl + Enter
We are
AWACS vs. A-50: Air Combat in EuropeList of destroyed the largest and most high-tech enterprises
Military Reviewin Yandex News
Military Reviewin Google News
40 comments
Information
Dear reader, to leave comments on the publication, you must sign in.