Bosporan Kingdom. The struggle for power on the eve of the fall of Great Scythia 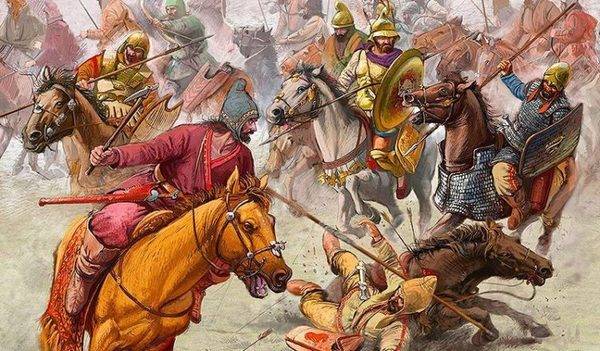 After the Greek city-states of the Northern Black Sea region managed to defend their independence in the fight against nomadic tribes, the situation on the Crimean and Taman peninsulas somewhat stabilized. But the disappearance in the XNUMXth century BC. e. a defensive alliance led by the Archaeanaktids had both positive and negative consequences. Numerous historical the parallels suggest that former allies often become enemies. The unification of the Bosporan city-states, as historians suggest, was no exception to this rule.


Scientists know little about that period. However, the entry of Diodorus of Siculus from the "Historical Library" testifies to the collapse of the Archeanaktids' union in 438/437 BC. and the coming to power of a certain Spartok (according to some versions, Spartak). It is not known for certain who this man was and under what circumstances he received supremacy, but from the beginning of his reign, a dynasty reigned near the northern reaches of the Black Sea, which ruled on the shores of the strait for 330 years.

“Under the archon in Athens Theodore ... In Asia, those who reigned over the Cimmerian Bosporus and called the Archeanaktids ruled for 42 years; Spartak got power and ruled for seven years.
It was under the Spartokids that the unification of the Greek city-states into the Bosporus kingdom began. By force and diplomacy, the successors of Spartok united many cities under their rule, including Theodosia, Nympheus, Phanagoria. Local handicrafts and agriculture flourished under their management. Strong alliances were established with the Athenian city-states and neighboring barbarian tribes. Schools, temples and many other cultural structures appeared.

However, not all was well within the dynasty itself. History remembers the events in which the Spartokids entered into an irreconcilable fight with each other in the struggle for the kingdom.

In the second half of the 38th century BC. e. Tsar Perisad I was in power in the Bosporus. After staying on the throne for nearly 309 years, he died in 308/XNUMX BC. e., leaving behind three sons: Satyr, Eumel and Pritan.

As often happened, the kingdom passed in seniority to Satyr. Evmel, dissatisfied with this, enlisted the support of barbarian tribes and began to actively prepare for the overthrow of the current government in order to ascend the throne himself. Realizing the seriousness of what was happening, Satyr gathered an army and set out on a campaign against his brother. 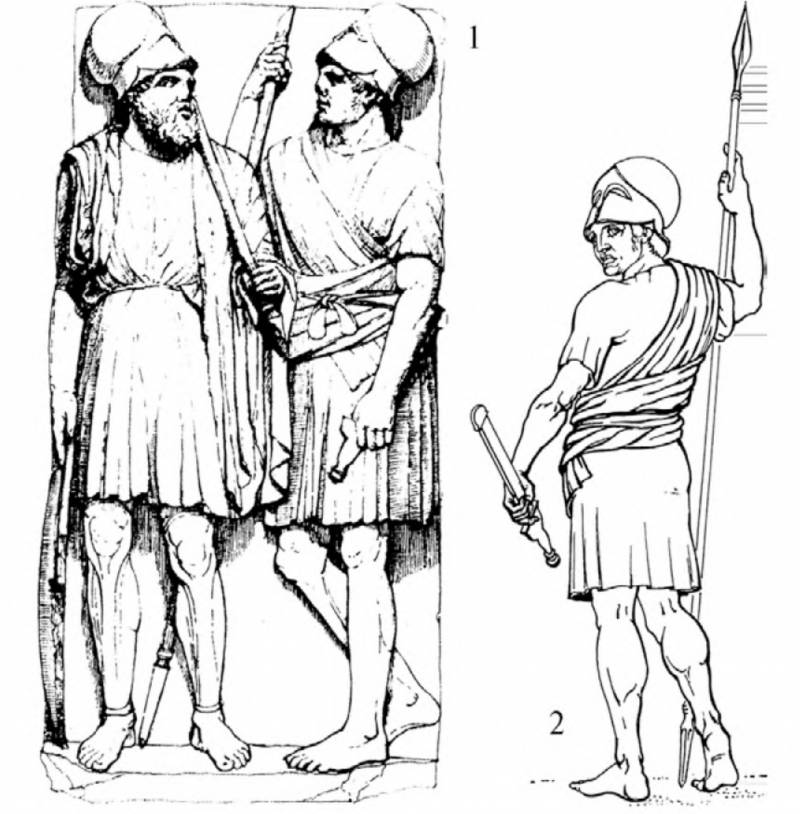 Here is what the Greek historian Diodorus of Siculus writes about this event:

“... Eumel, having entered into friendly relations with some of the neighboring barbarian peoples and gathered significant military forces, began to challenge his brother's power. Satyr, having learned about this, moved against him with a significant army ... Satyr's allies in this campaign were Greek mercenaries in the number of no more than two thousand and the same number of Thracians, and the rest of the army consisted of Scythian allies in the amount of more than 20 thousand infantry and no less 10 horsemen. On the side of Eumel was the king of the Fatei Arifarn with 000 thousand cavalry and 20 thousand infantry ... "
Where the military clashes took place and what specific barbarians supported Eumel is not entirely clear. The opinions of scientists on this matter are very different. There is reason to believe that the Asian part of the Bosporus kingdom (the modern Taman peninsula) became the area of ​​hostilities, and the Sarmatian tribe of the Siraks and the Meotian tribes subject to them came out on the side of Eumel.

An alternative point of view is the opinion in which the rebellious prince was supported by the Fatei tribe, previously subordinate to the Bosporus rulers, but emerging from under his protectorate. However, this version has much fewer supporters in the scientific world.

Whatever it was, but the battle took place. The army of Satyr crossed the river with the then name of Fat and entered into battle with the army of Eumel.

Despite the similar compositions, the battle formations of the sides were somewhat different from each other.

The satyr, according to the Scythian custom (which is especially noted by Diodorus), stood in the center of the army, among the cavalry. On the left flank of it were the barbarian infantry and a reserve detachment of Scythian horsemen. On the right are Greek troops and Thracian mercenaries.

Evmel, however, was located on the other side on the left flank, among the infantry. In the center of the army was the barbarian king Arifarn with the shock Sarmatian cavalry. On the right they were covered by the infantry detachments of the Meots.

Based on the records of Diodorus, it can be concluded that the role of Eumelus in the battle was far from the first, and the whole battle against Satyr was led by Arifarn.

A satyr with detachments of selected cavalry struck the center of the enemy army. After a stubborn bloody battle, he managed to put the Siraks to flight. At first, Satyr even began pursuing the fleeing troops. However, upon learning that Eumel was winning on his flank, he stopped the pursuit and delivered a rear blow at the enemy's infantry, overturning it and winning the final victory in the battle. The surviving detachments of Arifarn and Eumel took refuge in the well-defended royal fortress on the banks of the Fata.

The satyr did not immediately rush in pursuit. With a victorious army, he first devastated the lands of the rebels, burned local settlements, captured a large amount of booty, and only then tried to take the fortress by storm.

The royal headquarters, in which the rebels took refuge, was almost impregnable. Surrounded by a river, steep cliffs and dense forest, it was reliably protected from attacks. Trying to prepare a foothold for the capture of the fortress, the army of Satyr began to cut down the forest that prevented passage to the fortifications. In response, Aristophanes sent out detachments of riflemen, which struck the cutters and caused great damage to the assault.

Only on the fourth day did Satir manage to approach the walls of the fortress. Here, being in a cramped position, the attacking army suffered serious losses. The situation was tried to save the leader of the mercenaries Meniscus, who rushed to the assault right through. He was supported by the Satyr himself with his detachment, which, apparently, was a big mistake: in that battle, Satyr was wounded in the arm with a spear. The wound turned out to be so serious that the king died that same night.

After the leader's death, the attackers lifted the siege and retreated to the city of Gargaze. From there, the body of Satyr was transported to Panticapaeum, where a magnificent funeral was arranged befitting a king. After the burial, the youngest of the three brothers, Pritan, arrived at the inactive army, where he received royal power and continued to fight the enemy.

However, he failed to repeat the successes of Satir. When Pritan turned to action and decided to fight, luck let him down, and the Scythian troops were defeated. They were pressed to one of the isthmuses of Lake Meoti (present-day Sea of ​​Azov), where they were forced to lay down weapon and give up.

Fleeing from persecution, Pritan tried to hide in the city of Kepy, where he was overtaken by the troops of Eumel.

Having gained victory in this difficult civil strife, the new king dealt harshly with his opponents, ordering to kill the families of Satyr and Pritan, as well as destroy all their friends. After that, despite the shown severity, during the period of his further reign, Eumel showed himself as a far-sighted and skillful ruler. He significantly thinned the number of pirates who lived in local waters, helped many Greek city-states and organized a constant reception of refugees from different parts of the Hellenic world, distributing land to them and helping to settle in new territories.

As a result of the reign of Eumelus, the Bosporan kingdom strengthened and gained additional authority on the world stage. The sudden death, which found him in 304/303 BC, did not come true for the further plans of the new king. e.

Summing up, we can conclude that the struggle for the throne of the descendants of Perisad I was not just a civil confrontation, but a phenomenon that went far beyond the boundaries of the Bosporus kingdom. Given the composition of the armies on both sides, it becomes clear that the war for the throne was only a pretext. The real reason for the clash of such significant forces was the opposition of nomadic barbarian tribes. Scythians and Sarmatians fought not for the kings of the Bosporus, but for their own interests. The Sarmatian tribes came from behind the Don and rushed to the west, the Scythians retreated to the Crimea under their blows.

In his actions, Evmel looked very logical. It is unlikely that he could count on the support of the Scythian tribes, which had a long-standing alliance with the Bosporus rulers. The bet on a new force that came from the east turned out to be quite natural. But the Scythians, most likely, supported Satir not because of good-neighborly relations. At that time, their struggle with the Sarmatians was a strategic matter, which is why they provided Satyr with such an impressive army. The events in which Pritan, having buried his brother, immediately went to the Scythian army, and already there, with their approval, accepted the reign look natural here.

As is known from history, the Scythians were defeated in the fight against the Sarmatians. Great Scythia soon collapsed, and the new tribes won a final victory over competitors in living space. The unrest in the Bosporus kingdom calmed down for a while.

And the Spartokid dynasty continued to rule over the lands of the Cimmerian Bosporus.