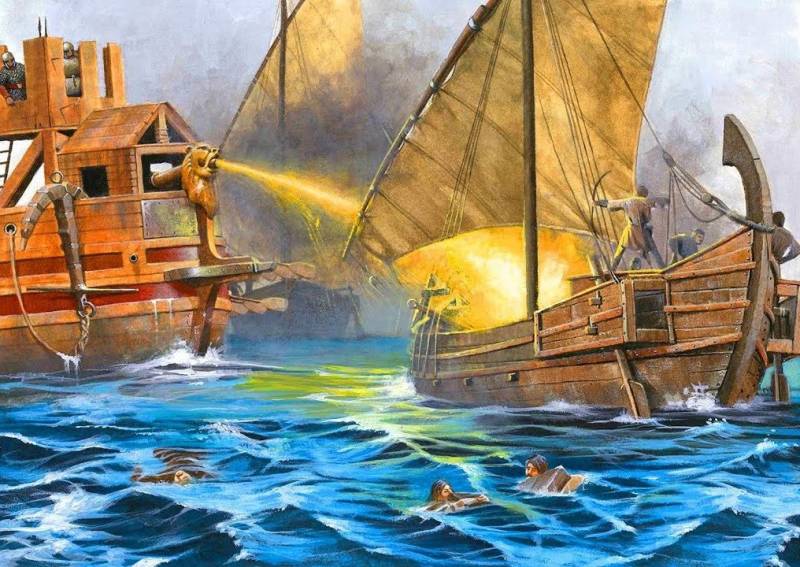 People have always attached great importance to fire. On a person, a burning flame, like flowing water, still produces an almost hypnotic effect. Which is reflected in numerous sayings and anecdotes.


At the same time, man has always tried to tame the elements, wishing to use the power of fire for military purposes. One example of the use of fire in hostilities is the famous Greek fire, which was one of the military trump cards of the Byzantine Empire.

It so happened that today we know how and where gunpowder was invented, as well as fireworks - in China. A lot is known about sparklers and sparklers from India. Which were originally an important signaling element. And only in the recent past have they become a standard attribute of Christmas or New Year. But at the same time, we know very little about Greek fire, the formula and composition of which are still a mystery to chemists and historians.

Today, only the estimated composition of the mixture and the technology of using this fire for military purposes are known. At the same time, the available knowledge allows us to say that Greek fire was the obvious predecessor of modern napalm. And the tactics and methods of its use were the prototype of modern flamethrowers.

It is believed that for the first time flammable compounds that could not be extinguished with water were used by the ancient Greeks.

Perhaps the first use of Greek fire was the land battle of Delia, which took place in 424 BC. The combustible mixture was used in battle between the Athenians and the Boeotians. More precisely, during the assault by the Boeotians of the ancient city of Delium, in which the garrison of the Athenians took refuge.

The Boeotians could use special devices in the storming of the city, which were pipes made of hollow logs. The mixture was fed from pipes with sufficient force to ensure a successful assault on the fortress by the Boeotians. 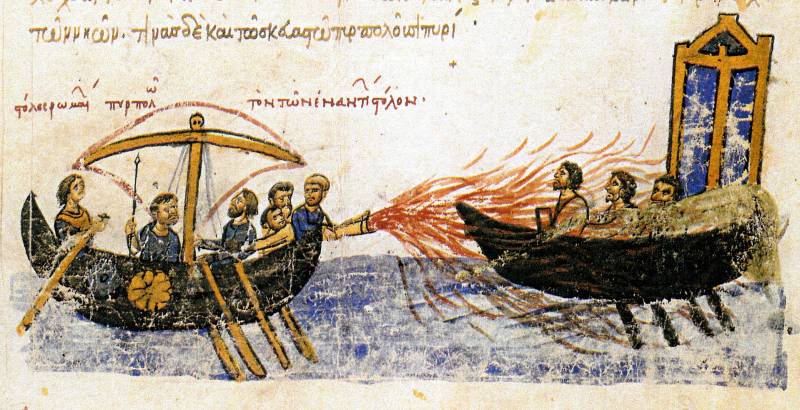 The use of Greek fire. Miniature of the Madrid Skylitz
Historians believe that the ancient Greeks actually used in some battles special incendiary mixtures, which could include crude oil, sulfur and various oils. It was also the Greeks who were most likely the first to use the prototypes of flamethrowers in combat conditions. At the same time, flamethrowers of those years did not throw a combustible mixture. They, like fabulous dragons, spewed flames along with sparks and burning coals.

The devices were fairly simple mechanisms with a brazier, which was supposedly filled with charcoal. With the help of bellows air was forced into the brazier. After that, an open flame burst out of the mouth of the fire pipe with a terrible roar.

It is believed that the range of such devices did not exceed 5-15 meters. But for the capture of wooden fortifications or use in a naval battle, when the ships converged closely for boarding battles, such a range was enough.

The use of a special flammable mixture at sea was described in his work "On the Art of the Commander" in 350 BC by the Greek author Aeneas the Tactician. Who, most likely, was a politician or military leader, one of the first to write about combat tactics and the art of war.

In his writings, a mixture that could not be extinguished using traditional methods was described as follows:

At the end of the XNUMXth century AD, the Byzantine Empire was still a magnificent state. But it gradually lost its territory, being surrounded by enemies. The Arabs posed a great danger to the empire.

From 673 to 678, they besieged the capital - Constantinople - from land and sea for five years, trying to take the city. But they were forced to retreat. 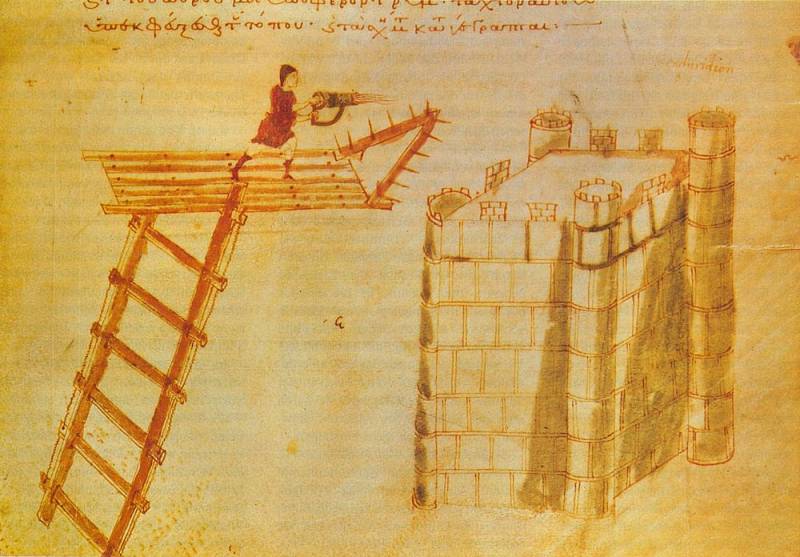 The use of a manual cheirosyphon from the upper navigation bridge during the siege of the fortress.
The empire was largely saved by the secret of the Greek fire, which it acquired around the same years. The new wonder weapon provided the Byzantine the fleet advantage at sea, forcing the Muslim squadrons to retreat. At the same time, the Arabs suffered sensitive defeats. On land, the troops of the Arab Caliphate were defeated in Asia.

As a result of the wars with the Arabs, the empire lost many lands, but came out of the conflict more monolithic and cohesive. The same applied to its national composition, which became more homogeneous. And most importantly, religious differences disappeared in the empire.

The engineer and architect Kallinikos is called the inventor of the Greek fire, which helped to prolong the existence of the Byzantine Empire. Or Kallinikos, who lived in the Syrian Heliopolis conquered by the Arabs (today the city of Baalbek in Lebanon).

The creator of the combustible mixture was either Greek or a Hellenized Jew by nationality. In about 668 Kallinikos managed to escape to Byzantium. Where he showed a new invention, offering his services to Emperor Constantine IV. In addition to the incendiary mixture itself, Kallinik presented there a device for throwing it. Such devices were later installed on large Byzantine sailing and rowing ships - dromons.

The device for throwing fire was called siphon or siphonophore. The product consisted of copper pipes that could be decorated with dragon heads or shaped like such heads. Siphons were placed on the high decks of the dromons.

They spit out the mixture of fire under the action of compressed air or bellows, like blacksmiths. The range of such Byzantine flamethrowers could reach 25-30 meters. This was enough for use in the navy. Since the combustible mixture, which could not be extinguished with water, posed a huge danger to the slow, clumsy wooden ships of that time.

The mixture continued to burn even on the surface of the water, which only frightened the opponents of the Byzantines even more. The psychological effect of the use of unusual weapons sometimes turned out to be more important than its real destructive abilities. 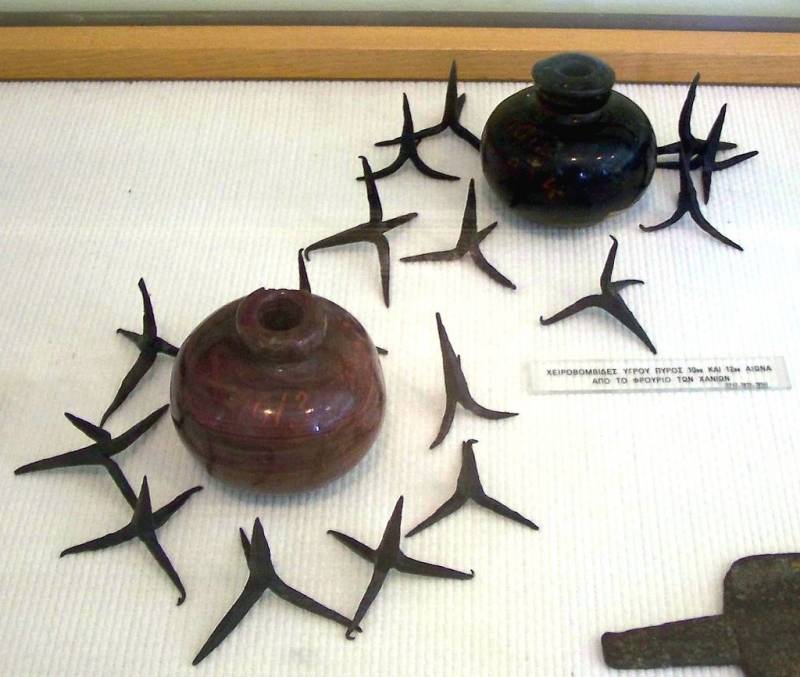 Hand grenades with Greek fire from the Chania arsenal. X and XII centuries.
Over time, even portable hand-held devices for throwing combustible mixtures, called cheirosyphon, appeared in Byzantium. Images of such devices in engravings have survived to this day. After a while, they began to equip hand grenades with Greek fire, as well as special vessels, which were thrown by catapults into besieged cities and fortresses.

It should be noted that the Greek fire had many different names in those years. Bulgarians, Russians and Arabs (as well as other opponents of the Romans) called this mixture differently. For example, "liquid fire", "artificial fire", "cooked fire". The combination "Roman fire" was also used.

In the same way, the possible composition of such a combustible mixture was different in different sources. The secret was carefully guarded in the Byzantine Empire.

In many ways, it also hinders the complete unraveling of the composition of Greek fire by the fact that in the surviving historical documents on the ancient names of substances are often impossible to identify their exact modern counterparts.

For example, the word "sulfur" in Russian translated materials could mean almost any combustible substance, including fat. In any case, experts agree that the most likely components of the Byzantine miracle weapon were crude oil or asphalt, quicklime and sulfur. Additionally, the composition could include calcium phosphide, which releases phosphine gas upon contact with a liquid, which spontaneously ignites in air.

The possession of Greek fire and the technologies of its use for several centuries made the fleet of the Byzantine Empire the most formidable force in the Mediterranean.

In 673-678, thanks to this invention, the first significant losses were inflicted on the Arab fleet. In 717, Greek fire again came to the aid of the Byzantines, who defeated the Arab fleet that was besieging Constantinople. Later, the Byzantines used ships carrying siphons against the Bulgarians and the Rus.

Among other things, Greek fire allowed Byzantium to successfully repel Prince Igor's raid on Constantinople in 941. Then the boats of the numerous fleet of the Kiev prince were burned by fiery dromons and triremes. The unsuccessful first campaign in 943 was followed by a second. Already overland and with the support of the Pechenegs. This time did not come to military clashes. And the parties made peace in 944. 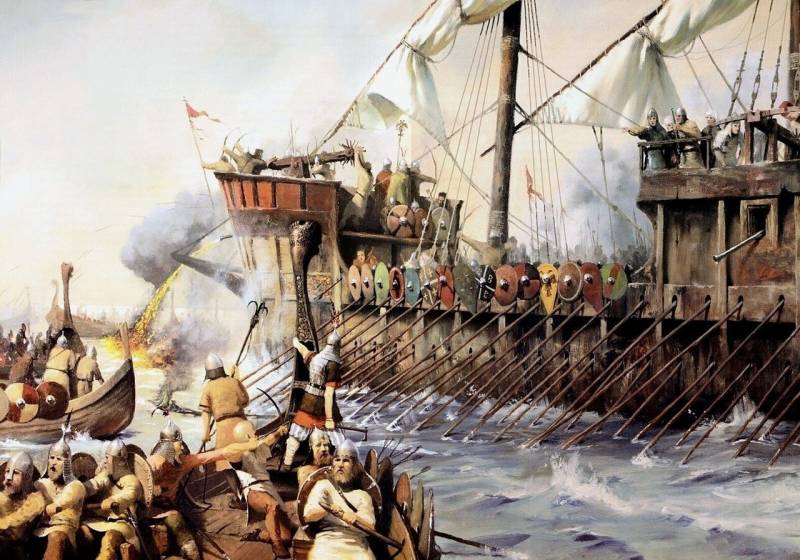 The Byzantine dromon attacks the battle boats of the Slavs.
In the future, the use of Greek fire continued. But the use of mixtures gradually decreased. It is believed that the last time fire was used in 1453 during the siege of Constantinople by the troops of the Turkish Sultan Mehmed II Fatih.

The version seems to be quite logical that along with the wide distribution of gunpowder and firearms created on its basis in Europe and Asia, Greek fire simply lost its military significance. And the secret of its manufacture was again safely forgotten for some time. To return to the battlefields in a new and much more terrible guise already in the XX century.

Regardless of how effective Greek fire was, it undoubtedly became the prototype of all modern flamethrower mixtures and napalm.

In addition, flammable combustible mixtures first migrated into fairy tales. And then into the literary genre of fantasy.

The prototype of the "wild fire" in the well-known fantasy saga "A Song of Ice and Fire", which was filmed by the HBO channel in the form of the most popular television series "Game of Thrones", was apparently Greek fire.