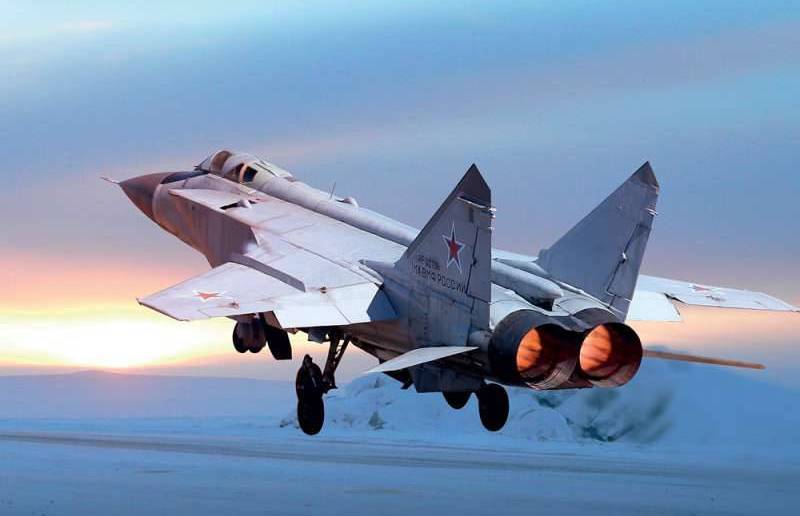 Russian high-altitude fighter-interceptors MiG-31BM marine aviation The Pacific Fleet took up combat duty on air defense at the Anadyr airfield - closer to the US borders.


The Pacific Fleet has strengthened the aviation grouping in the Arctic zone by deploying high-altitude fighter-interceptors MiG-31BM naval aviation at the Anadyr airfield fleet... Aircraft crews have already taken up combat duty.

Currently, the aviation unit is working out the issues of interaction with ground-based air defense systems when performing tasks as intended.
- said in a statement.

It is specified that in order to accommodate the crews of the MiG-31BM fighters, at the airfield, work has been completed on the improvement of the premises intended for the accommodation, rest and nutrition of personnel when they are on round-the-clock combat duty for air defense.

Note that last year the Ministry of Defense announced plans to make all Arctic airfields all-season. Earlier, in 2016, it was announced about strengthening the air defense of the Arctic and the return to this region of the high-altitude interceptors MiG-31 and MiG-31BM as elements of air defense. According to the plans of the military department, the MiG-31 will serve in the North until a new high-altitude interceptor appears, which will replace the "thirty-first".
Ctrl Enter
Noticed oshЫbku Highlight text and press. Ctrl + Enter
We are
Reports from the militia of New Russia for 27-28 September 2014 of the yearYuri Drozdov: Russia prepared the role of the sacrificial calf
Military Reviewin Yandex News
Military Reviewin Google News
48 comments
Information
Dear reader, to leave comments on the publication, you must sign in.