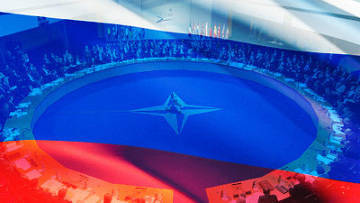 In recent days, some turbulence has appeared in the measured work of the NATO headquarters, where the next Alliance summit in Lisbon is being prepared. The report of the “group of sages” on the draft of the new Strategic Concept of the North Atlantic Treaty Organization, which was referred to by the “MIC” (No. 26, 37 for 2010 a year), seems to be no longer considered as a basis for discussion when approving the main text of the document.

Some diplomats characterize the project as overly verbose and more generating questions than giving answers. Obviously, he has already played his role: he demonstrated the “openness of NATO to a general discussion (with the participation of the allies and Russia) of the key directions of development of the alliance” and can now be put aside. It is time for a truly serious work in a narrow circle of initiates.

After extensive consultations with 8 of September with US President Barack Obama and his assistants, the secretary general of the bloc Anders Fogh Rasmussen sent a multi-page document with high secrecy to the capitals of NATO member states, which is planned to be adopted as an annex to the Strategic Concept agreed at the summit. It is in it without diplomatic vague language that the main directions of NATO transformation and concrete steps of the alliance in the coming years will be reflected, including the development of capacity to respond to challenges and threats (nuclear and conventional, cyber attacks, terrorism, energy security, etc.), plans to leave Afghanistan , policy to further expand the union, relations with Russia.

After studying in the capitals, the document will be reviewed at a joint meeting of the NATO Council at the level of foreign ministers and defense 14 October.

At the same time, Anders Fogh Rasmussen sent an official invitation to Moscow to hold a Russia-NATO Council summit in Lisbon and suggested a list of topics for discussion: the Treaty on Conventional Armed Forces in Europe (CFE Treaty), missile defense, tactical nuclear munitions in the Old World. The problems are certainly interesting and important for both parties. At the same time, the Kremlin is not in a hurry to give an answer to the message of the secretary general of the alliance.

The fact is that Moscow still does not know anything about the content of the above-mentioned future application, which is very important for building a strategic line of relations with NATO. It can be assumed that the Russian leadership, in order to make a decision on the meeting, would like to clarify the key issues for the national security of our country, which are reflected in this document. In the meantime, a high degree of uncertainty about the intentions of one of the parties, which still exists on the eve of a possible Russia-NATO summit, does not exclude the repetition of the scenario of the well-known “turn over the Atlantic” made in March 1999 by the then Prime Minister Yevgeny Primakov about the beginning of the NATO bombing of Yugoslavia.

It is clear that the basis of the trusting relationship between the partners is an agreement on the absence of surprises in their activities. Unfortunately, the situation with the invitation of Russia to the summit does not allow us to talk about the implementation of such a principle in practice.

A well-known surprise, but already in intra-NATO affairs, was an initiative strongly promoted by Germany and a number of other members of the alliance to include a section on nuclear disarmament in the draft Strategic Concept. The Germans were supported by Belgium, Norway, the Netherlands and Luxembourg. The UK diplomatically announced its intention to carefully study this initiative. France, which sees in the Berlin proposal a danger to its sovereignty in the nuclear sphere, made strong objections.

Supporters of preserving in the Old World of the American nuclear weapons, the presence of which they are trying to present as a guarantee of the strength of transatlantic relations. The NATO recruits from Central and Eastern Europe are noisily protesting against the 300 exportation of nuclear ammunition into the national territory of the United States, referring to the fiction of “aggressiveness” and “imperial habits” of Russia that they strongly advocated.

In the time remaining before the summit, the Secretary General of the Alliance is trying to somehow coordinate the approaches of the Allies on this crucial issue. In a strategic context, it’s about whether NATO will take the already beaten track, retaining nuclear weapons in Europe as a deterrent and a symbol of the American contribution to the defense of its European allies, or choose the path leading to increased joint arms control and disarmament efforts.

In the meantime, the International Secretariat and the NATO Military Committee, together with officials of the relevant government departments of the countries members of the bloc, are preparing proposals for harmonizing the positions of allies on key issues of the future organization. Apparently, multistage consultations will last until the very beginning of the Lisbon summit. Connecting Russia to a discussion with the alliance of issues important for both sides at the current stage of preparing the summit would be very productive. In fact, it would be possible to implement one of the basic principles of the Russia-NATO Council: jointly, in the 29 format of states, determine the main areas of partnership relations.