"What are we fighting for": 5 years of Russia's military presence in Syria 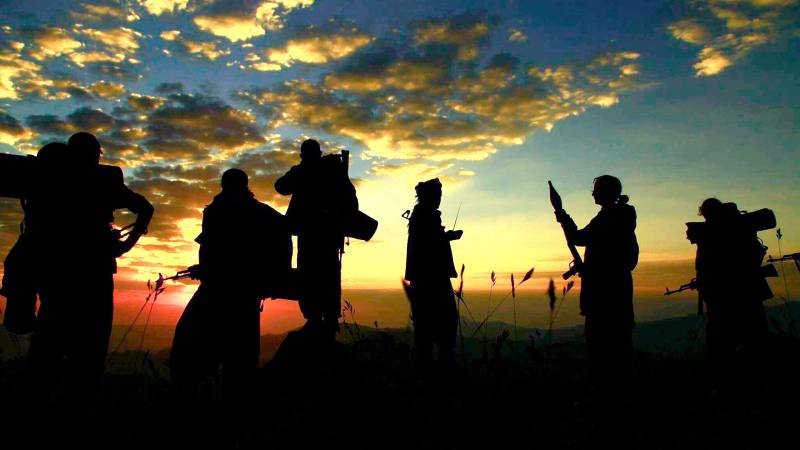 Five years ago, a new period in their lives began for quite a few soldiers, sergeants, officers and generals. Someday (in their memoirs) they will call it the time of their formation. When for the first time they realized that their destiny is serving the Motherland.

Over the years, I have heard the same questions from completely different people hundreds of times:

“What is all this for? Why risk the lives of our guys there, fighting on foreign territory and for a foreign (in fact) country? "

Was all this necessary? Was the existence of this Islamic state (prohibited in the Russian Federation) in Syria so important for Russia? Another revolution, coup, seizure of power? How many of them happen all over the world almost every day? I will try to answer these questions again.

I believed and still believe that the very idea of ​​creating a theocratic state, a caliphate, is far from new and originated not in the heads of Islamic fanatics, but far from Iraq or Syria. I do not approve (this is my personal opinion), but the guys who came from overseas brought this idea into the heads of the fanatics.

Agree, remembering the state that existed in the XNUMXth-XNUMXth centuries AD and proclaiming its re-creation within the same boundaries as at that time, in the XNUMXst century, is difficult even for fairly educated people. But they wanted to recreate exactly that victorious caliphate, in the borders from Spain to India.

Why did this idea come up at all? The answer to this question is pretty simple. The US is bogged down in this region. The war, which seems to have already been won, suddenly flares up again. Moreover, those who yesterday were allies and swore eternal love suddenly became bitter enemies. Chaos reigned in the region. The Americans could no longer cope with numerous military formations and gangs.

But anyway, why did we send our guys to fight? As corny as it sounds, we sent military personnel to defend our homeland. Defend Russia. Why am I writing like this? Simply because the terrorists have never hidden the fact that Russia is one of the main targets of expansion for them. We heard an echo of such statements quite recently from one of the advisers to the President of Turkey.

For a long time they tried to oust Russia from the Middle East political and, most importantly, economic space. It was too tidbit to part with it without a fight and give it to the Russians. This is the second reason why we needed to show our teeth to the Americans.

And the third (in my opinion, and in the opinion of many of my interlocutors - the main) reason is the possibility of transferring Syrian militants (from among the citizens of Russia) to the Caucasus region. The wounds of the two Chechen wars are too fresh. We have paid too dearly for the peace that has been restored in the Caucasus to again allow the militants to begin massacres in this region.

Half an hour from peace to war

I would not call the fourth reason our romantic desire to live according to international laws, law and order. Remember the numerous statements by leaders of various ranks that we are in Syria legally? At the request of President Assad? The romance is understandable. If the rules disappear, fights without rules will begin. And this is world chaos.

Remember the time when Russian units first appeared in Damascus? I then well remembered a very precise phrase of one of the Russian military correspondents (I apologize to this courageous man for forgetting his last name):

"Damascus is a city where from peace to war it is only half an hour fast drive by car."
(I quoted from memory, so I can't vouch for absolute accuracy).

Then the intervention of our Aerospace Forces and precise precision strikes helped the Syrian army to believe in itself and go on the offensive. The liberation of the occupied territories began. Panic gripped terrorist groups in many places. Probably, for the first time in the entire war, the militants suffered quite significant losses.

Do you remember the reaction of the NATO and US leadership? The reaction of all these kings and princes from the Arabian Peninsula? How many screams began in the world of those who created a terrorist paradise? And how did our military quickly stop their chants and howls about freedom and democracy? Simply because they did not persuade the terrorists, but beat them. Exactly, verified, competently.

The Russians worked in such a way that it aroused admiration from the whole world. This shocked not only Syrians, but also Europeans and even Americans. Hence the talk about the creation of an anti-terrorist coalition. What was for the Western countries (especially for the Americans, who did not want to hear about any kind of cooperation), like a tub of cold water on a hot head.

And all this was done by ordinary soldiers, officers and generals of our army. Without even thinking about it. They were just doing their job. 68,5 thousand troops went through the Syrian operation. There are only 460 generals. 27 thousand officers and more than 40 thousand soldiers and sergeants. 14 thousand of them were awarded orders and medals for courage and military valor.

Unfortunately, there is no war without losses. During the operation in Syria, 108 soldiers were killed. Probably, many remember the shock of the information about the crash on March 6, 2018 of the An-26 aircraft at the Khmeimim airbase, when 39 of our guys died at once ...

And "Kuznetsov" can, if necessary

You know, I would like to recall one ship, which was undeservedly ridiculed, including by our media. I'm talking about the heroic campaign of "Admiral Kuznetsov". Almost two thousand heroes, members of the crew of the ship, which, despite its old age and required repairs, not only reached the shores of Syria, not only with its power resisted the American the fleet, but also became an airfield for Russian carrier-based aircraft. For the first time, naval deck pilots took part in the war, and for the first time from the deck of the Admiral Kuznetsov. By the way, these pilots made 420 sorties!

I will name only one of the figures on the effectiveness of the actions of the Russian army. 89 thousand militants were killed. Of these, 4,5 immigrants from the former republics of the USSR. There are many numbers. Finding them is not difficult.

In general, it seems to me that the military operation in Syria has become an indicator of the readiness of the Russian Armed Forces for serious actions outside the territory of Russia.

And a good indicator. Today there are no longer any doubts that the Russian army will really be able to, if necessary.

Ctrl Enter
Noticed oshЫbku Highlight text and press. Ctrl + Enter
We are
A great interview with Sergey Lavrov: about Ukraine, Obama and IranWhat you didn't want to know about England
Military Reviewin Yandex News
Military Reviewin Google News
272 comments
Information
Dear reader, to leave comments on the publication, you must sign in.