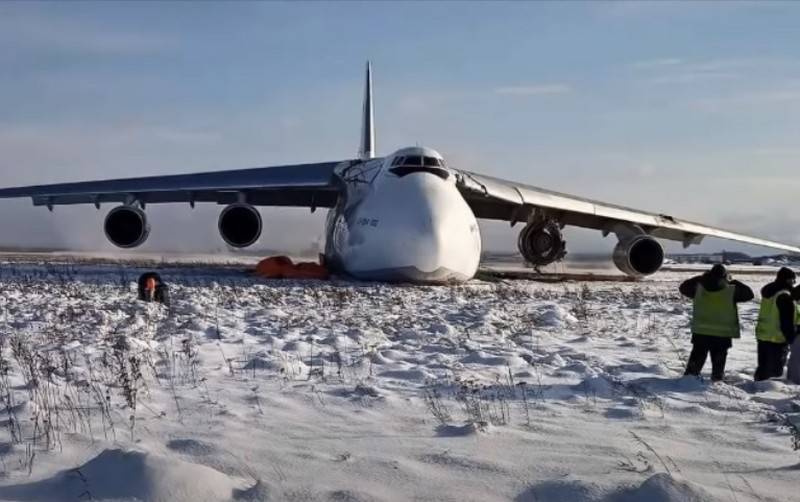 The Russian An-124 transport aircraft made an emergency landing at the Novosibirsk airport on November 14, 2020. This was caused by a problem with the engine. The American edition of The Drive wonders, since Russia has few such aircraft left, is it time to start developing a replacement for them.


According to the publication, the Russian An-124 was flying from Novosibirsk to Vienna. After takeoff, he had engine problems that forced the crew to make an emergency landing. On landing, the left landing gear strut broke down near the plane, which led to damage to the fuselage, wing and engines of the Ruslan. Nobody on board was hurt.

The author notes that it is not known what other damage the plane received and whether it will be repaired, and if so, how long it will take.


The point is, he writes, that there are few An-124 usable in Russia, some of which are part of the military transport aviation VKS, and a part belongs to the Volga-Dnepr company, which carries out commercial transportation. In total, a total of 54 serial An-124s were produced for all the time, some of which were assembled in Kiev, and some in Ulyanovsk.

After the termination of the production of this aircraft, Russia tried to restore the production of the modernized An-124 in Ulyanovsk, but this project had to be postponed due to the severance of relations with Ukraine in 2014, since the rights to the An-124 belong to the Ukrainian Antonov design bureau.

Therefore, Russia should consider the option of creating a new aircraft capable of replacing the An-124, especially since the project of such an aircraft already exists. To replace Ruslan, Russia is proposing to create an Elephant aircraft, similar in appearance to the An-124, but much larger and with better characteristics. After the implementation of this project, Russia will receive its own heavy-duty aircraft and will not depend on other countries for its production and supply of spare parts.
Ctrl Enter
Noticed oshЫbku Highlight text and press. Ctrl + Enter
We are
Reports from the militia of New Russia for 27-28 September 2014 of the yearDecember 2010 years. Russian March. Senseless and merciless? Notes not a Russian person
143 comments
Information
Dear reader, to leave comments on the publication, you must to register.