Lessons from Karabakh. Russia is not ready for war 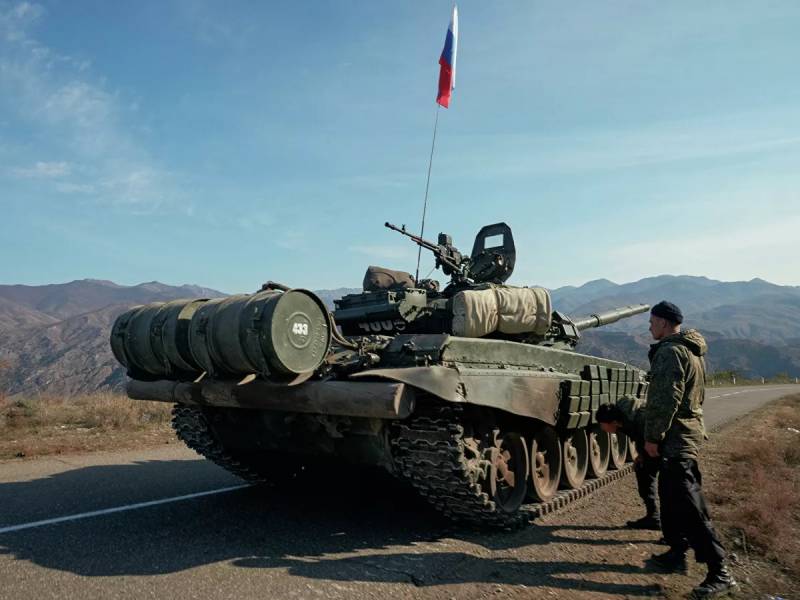 The war is inexorably approaching Russia. Unfortunately, we can confidently say that the country and the people are not ready for war. The Kremlin hides and runs from any conflict, as it feels its weakness in the absence of unity of power, the leading party and the people.

Stepanakert and Yerevan clearly overestimated their strengths, which was the reason for the defeat in the new Karabakh war. Under the previous scenario, Azerbaijan against Armenia, even with a certain superiority of Baku in technology and weapons, The Karabakh problem could not be solved by force of arms. The Karabakh clan in Armenia, the war veterans were confident that they would “be able to repeat” the previous victory. Yerevan is accustomed to living in conditions of "stability": no peace, no war. Didn't notice that the world has changed. They did not expect that Turkey would so brazenly and openly break into the zone of Russian interests. And Transcaucasia (even after the collapse of the USSR, taking into account the three centuries of Russian struggle for peace in the region) was our sphere of influence.

However, the world has changed a lot and continues to change rapidly. Erdogan is building a new Ottoman empire, where the Caucasus is the sphere of interests of Turkey, as well as the countries of the Middle East, North Africa, and the Balkans. Now the republics of Turkestan. On the way, Crimea (fortunately, Ankara did not recognize Crimea as Russian), the Russian North Caucasus and the Volga region. The Kremlin, despite its patriotic propaganda and "victories" on TV, is retreating. Even the Russian Donbass, not to mention the ancient Russian capital Kiev, is not recognized as part of the Russian world (civilization).

Istanbul supported Baku, in fact, made it a vassal. Its air force, which covered the airspace of Azerbaijan, advanced methods of warfare (drones), worked out in Syria and Libya, advisers and staff officers, special forces, pro-Turkish militants transferred from the Middle East. Turkey came to the Caucasus again. And it is quickly being mastered - a gas corridor to the Caspian Sea and further to Kazakhstan and Turkmenistan. Transport corridor Baku - Tbilisi - Kars. The new Turkish empire is becoming a gas hub and logistics power, connecting ports to railways, increasing the capacity of the transport infrastructure of Georgia, Azerbaijan and Turkey. Aiming at the Caspian.

In Yerevan, they missed all this and received a heavy defeat, hurting national pride and creating a great threat to the Armenian people in the Caucasus. The catastrophe of a century ago was repeated, when the Turks defeated Armenia (How Turkey attacked Armenia; H. 2). At the same time, not only the Armenian military-political leadership, Pashinyan, but the entire people are to blame. In words, the Armenians all over the world and in Russia (in Armenia itself - 3 million people, in Russia - 1,5 million people, around the world - over 12 million people) demanded a blitzkrieg, victory over Azerbaijan and Turkey. But in reality, everything was limited to jingoistic hysteria. Yerevan, when a clear superiority of the enemy at the front became evident, did not dare to fight to the end, to fight to the death. The war showed the lack of unity of the Armenian political elite, various parties and people. Only split and discord.

Armenians from Russia and other countries did not go to fight for their historical lands did not start raising funds for the war (Armenian communities around the world have great financial opportunities). They preferred to look for the guilty - Pashinyan (who, of course, is guilty, but not alone), Russia and the Russians. Although Russia did not betray them. The Armenians themselves fell for the slogans of the nationalists about "Great Armenia" and ran into a grievous defeat. The Armenians who moved to Russia, Europe, the USA and Canada showed their love for their homeland only in words. In fact, their own well-being, primarily material well-being, comes first. They do not want to die for Karabakh and Armenia. Only a small part of the Armenians at that time showed their readiness to go to the front line and fight for their homeland (honor and praise for them). Others at this time held meetings and "fought" in the network. In general - woe to the vanquished.

As noted above, Turkey has again burst into the former sphere of our influence. Three hundred years of military-political efforts and a lot of blood of the Russian people in the Caucasus - the Kremlin "bargained" for three decades.

In fact, now Russia finds itself in the situation of 1904 and 1914. Shameful failures in the war with Japan. The heroism of Russian soldiers and sailors did not evoke any positive response in Russian society, on the contrary, among the students, only criticism. Hurray-patriotic frenzy at the beginning of the war with Germany, and then the complete collapse and disintegration of Russian society. Military failures triggered the collapse of the empire. The soldiers and officers still fought steadily and courageously, took heavy blows and beat the enemy themselves, while the generals and "high society" were already intriguing against the autocracy. The result was the betrayal of the "elite" in February 1917, the state and civilizational collapse, bloody Troubles and intervention. Parade of sovereignty.

Today everything is repeated. The lessons of history are not learned. There is no project for the future of the country. Material well-being according to Western standards is satisfied only by a small percentage of the population. The masses of the people are busy only with survival, caring for their daily bread and family. At the same time, life is steadily deteriorating. In all areas - the economy, incomes of the population, the already obvious disaster of schools and health care, the physical and mental health of the nation. Extinction of the people. The state management system, especially against the backdrop of the "pandemic", sank sharply. There is no unity of the country's leadership, the party in power and the people. And it cannot be, since social injustice in the Russian Federation has reached unprecedented heights. Officials and deputies can talk about patriotism, with salaries and incomes in the hundreds of thousands and millions of rubles (and some have whole "kamaz" of money and values). And ordinary pensioners and teachers survive on pensions and salaries of 12–20 thousand rubles.

Thus, there is no unity between the authorities and the people, as in 1941. We are on the brink of war with the new Turkish empire, behind which (as before) is the West (in particular, Britain). The first shots have already fired in Syria, Libya and the Caucasus. Turkey is aiming further: the Caspian Sea, historical Turkestan, the North Caucasus, then the Crimea and the Volga region. At the same time, NATO is preparing bridgeheads in the western strategic direction. In fact, everything is simple. The law of the jungle rules in world politics. "Human rights", "democracy", humanism and pacifism are tools for destroying the enemy. Under the thunder of beautiful slogans they destroy competitors. The strongest survives. Now the Russian Federation is showing weakness. Both regional and global predators see it.

Russia is not ready for war. V.V. Putin has been avoiding confrontation for 20 years. When the Kremlin is forced into war - Georgia (2008), Ukraine (2014), Syria (2015), it tries to “settle”, “stabilize” the situation. There is no victory, just as there is no obvious defeat. At the exit, we get zones, "fronts" where the problem is not solved, but only postponed. As in Donbass, in Ukraine as a whole. Now also in Karabakh. Moscow, culturally and financially and economically dependent on the West, cannot withstand the consistent expansion into our historical sphere of influence. Russia is "ready" for war only in words and TV pictures. Therefore, the Kremlin is fleeing any confrontation. Makes a beautiful face and retreats ...

Ctrl Enter
Noticed oshЫbku Highlight text and press. Ctrl + Enter
We are
About Stalin and KhrushchevWhat you didn't want to know about England
613 comments
Information
Dear reader, to leave comments on the publication, you must to register.