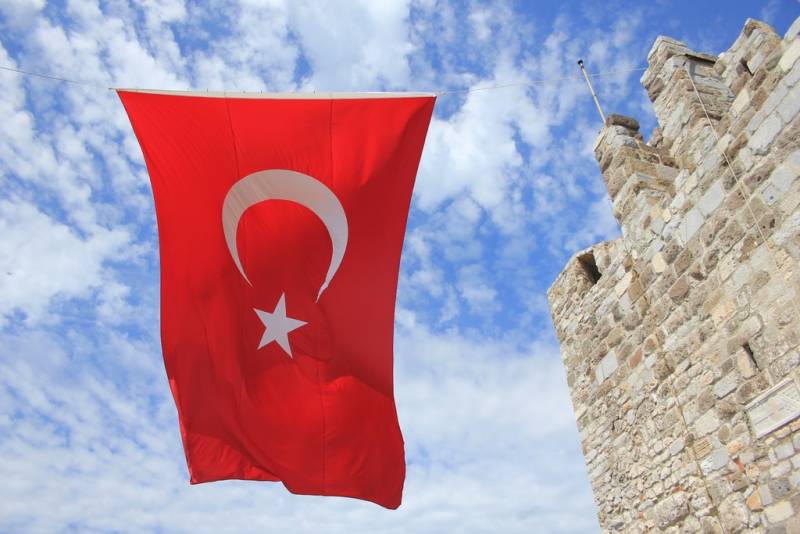 Recently, I began to try not to watch political talk shows at night and read military-political analytics. In order to maintain their own mental health. And healthy sleep too. How many times has it already happened that after watching some TV show in the evening, I wake up at night from the fact that a miserly man's tear makes its way to the pillow on an unshaven cheek. The body reacts to the next "surrender" of NATO of its wayward member Turkey.


In general, the insolence of the Turkish president towards everyone and everything is off scale. That is naughty in the north of Syria. It helps Azerbaijan by supplying weapons to liberate its territories from the Armenian occupation. It will face our military in Syria, or the Americans. Well, the idea of ​​the Great Turan is generally out of the ordinary. As well as the public "sending" of the president in France to ... a mental hospital for treatment.

You will sit in the silence of the night. Look at the impudent, coldly indifferent face of the Moon, turn your mind's eye to the west and calm down. And what, in fact, is the difference between Erdogan, for example, from Duda? Except for charisma, of course? I wanted to compare with the presidents of the Baltic states, but there is too obvious a difference. Physiological.

How does Polish military aid to Ukraine differ from Turkish military aid to Azerbaijan? How does Great Turan differ from Poland "from sea to sea"? How is the impudence towards Russia of all these Young Europeans different from Erdogan's statements? Microbe Estonia announces territorial claims against Russia. And the Turks, at every opportunity, recalls the Turkish Crimea and some other territories that "the Russians brazenly took away from the poor Turkish people in the XNUMXth century."

Turkey is "poured, poured", but not "merged"

The next confrontation between "freedom in French" and Islamic radicalism, and President Macron's routine statement about France's commitment to some ideals of this very freedom, the speech of the Muslim Erdogan looks quite logical. Yes, somewhat pretentious according to the oriental custom, somewhat harsh according to the Turkish custom, this is the only way the ruler of an eastern country should act, somewhat rudely, in accordance with Erdogan's temperament.

How many analysts jumped in their chairs from yet another unexpected joy. Everything! Europe will not forgive the Turks! Europe gives carte blanche to destroy Erdogan's regime! Gives to whom? Russia? Do we need it? Again with Russian hands to drag chestnuts out of the fire for Europeans?

I do not quite understand some of our political analysts, for example, on the issue of the ownership of Jerusalem. Somehow we bashfully “did not notice” Erdogan’s statement that “Jerusalem is ours”. How so? After all, this is a direct hint to Israel that the Jews should prepare for a great war with the Turks. But the funny thing is, in Tel Aviv, this performance was also not noticed. The dog howls, the wind blows, and the caravan ... Maybe that's why they didn't notice that they know the eastern mentality very well. A good slap in the face perfectly brings to life any active fighter for their territories.

Why is Ankara behaving this way towards Europe and at the same time being very restrained towards Russia and Israel? Yes, simply because Recep Erdogan is not afraid of those who are afraid of their own shadow. The polemic with Macron is nothing more than a warning. Warning that disregard for Turkey will intensify the weapons Ankara. Those very refugees, most of whom fought in Syria and will now be able to fend for themselves in Europe.

Perhaps the United States or Russia will become a brake on the Turkish president? Are Russians or Americans interested in this? Honestly, it's doubtful. What happened in Syria? The Americans actually cleared the north of the country for the Turks. The Russians simply indicated the line through which crossing is harmful to health. The Americans "put the EU in its place," make it pay for everything, while the Russians use the Turkey-EU contradictions to promote their own projects.

The question arises about NATO. After all, the alliance has the strength and means to moderate the ardor of the Turkish president. But the headquarters of this military bloc are far from idiots. When the alliance managed to get Turkey into its ranks, it was perceived as a huge victory over the USSR. The NATO bloc got the opportunity not only to have a "knife" in the underbelly of the Soviet Union, but also to actually control the Black Sea straits and the Black Sea Fleet of the USSR.

Suppose the alliance makes an idiotic decision to withdraw the Turkish army from the bloc. What is the end result? The collapse of the entire system of blocking Russia. In fact, Turkey's withdrawal from the alliance will turn NATO into a fiction. Who will defend Europe from the south? Microorganisms with "great armies"? The mighty army of the Independent? Or those battalion groups that can be deployed along Russia's borders?

So it turns out that not the Turks need the NATO bloc, but the NATO bloc needs Turkey. From here everything looks quite simple. The alliance will not get involved in a political showdown between the leaders of individual countries. The French president will walk around with a formidable face for some time, and then everything will be forgotten, as has already happened many times.

Will Russians and Turks face off in another war?

How do some politicians want to confront Turkey and Russia in the next Russian-Turkish war. Historical memory! Regardless of who won in such warriors, the Europeans were always the winner. Oh, how I want to repeat it. Moderate ardor and put either Turkey or Russia in place.

I recently read a very "optimistic" scenario for starting a war. USA kicks out "nasty Erdogan" from NATO. At the same time, a massacre of Russian tourists is being organized in Turkish resorts, who cannot be thrown out of Turkish beaches even with a coronavirus. They immediately remember the temple of St. Sophia, which Erdogan turned into a mosque. Moscow is forced to send troops in order to protect its own citizens and protect Christianity from Islamists. Begins "messing" all against all. And Europe and the United States are rubbing their hands to the side.

Dreams of idiots. Fantasies that speak of a misunderstanding of the way of thinking of an oriental person. Erdogan has a wonderful memory. He remembers not only evil, but also good. Paradox? Not at all. Look at how the Chechen military police battalions are fighting in Syria. Here is the answer to the question about the memory and gratitude of Eastern people. And who was the first to support Recep Erdogan during the 2016 coup attempt? Putin!

Today, the Russian president is probably the only politician who can stop Erdogan. The only world leader whose opinion the Turkish president reckons with. This is especially noticeable in the events in Karabakh.

Many are now talking about the need to save Armenia. Ancient Christian country. Country, member of the CSTO and so on. And did someone attack Armenia? Are there hostilities on its territory? And then, try to find differences in attitudes towards Russia and Russians today in Armenia and Georgia. The attitude of politicians and the people in general. Both countries are anti-Russian. Both countries by hook or by crook are striving to the West. Both countries clearly want to be "friends of the United States."

Suppose Russia introduced peacekeepers to Karabakh. Several dozen coffins were sent to Russian cities and towns. Patriots on both sides continue to shoot at each other and at our peacekeepers at night. And what will this change in the military-political situation? The Azerbaijanis, offended by the Russians, who were deprived of their victory, and on the other hand, the same offended Armenians, simply because the Russians arrived late. And both countries are turning their backs on Moscow. Do we need it?

Another question is the appearance of Syrian militants in the ranks of the Azerbaijani army. We cannot allow this to happen. We have an understanding of the fact that after the end of the war in Karabakh they will try to penetrate our territory. It seems to me that this problem will be the subject of a serious conversation between Putin and Erdogan. A friendly conversation, which, if it does not bring positive results, will lead to the disappearance in northern Syria of a couple of camps of Turkish supporters from the attacks of the Syrian army.

There will be no war or even just military clashes between Russia and Turkey. The Turkish president has put too much on the line. Erdogan will continue to strengthen the role of his own country in regional politics.

Today we can already talk about the formation of a new system of political equilibrium in the Asian region. Traditionally, Israel remains one of the centers of power. Iran is opposed to it. A reborn Syria is also in a corresponding position, even though internal problems persist. Well, and Turkey, which, thanks to the rather bold policy of Erdogan, without hesitation sending its troops to other countries, has taken its rightful place.

Periodic "earthquakes" in the region are caused primarily by the fact that all these countries, perhaps with the exception of Israel and Syria, are now pursuing a fairly independent policy. Which leads to periodic clashes with the powerful. Wars like the one in Karabakh are just part of a strategy for creating a balance of power in the region.

All the talk about some kind of drain on Turkey by the West, about the confrontation between Russia and Turkey, about the contradictions between Turkey and France, and so on, are just talk. The world is changing and this change is sometimes very painful. Like a surgery. It hurts, a lot of blood, but necessary ...

Ctrl Enter
Noticed oshЫbku Highlight text and press. Ctrl + Enter
We are
Situational analysis of the death of the MH17 flight (Malaysian Boeing 777), made on the basis of engineering analysis from 15.08.2014Results of the week. "God forbid to see Russian revolt, senseless and merciless!"
109 comments
Information
Dear reader, to leave comments on the publication, you must to register.