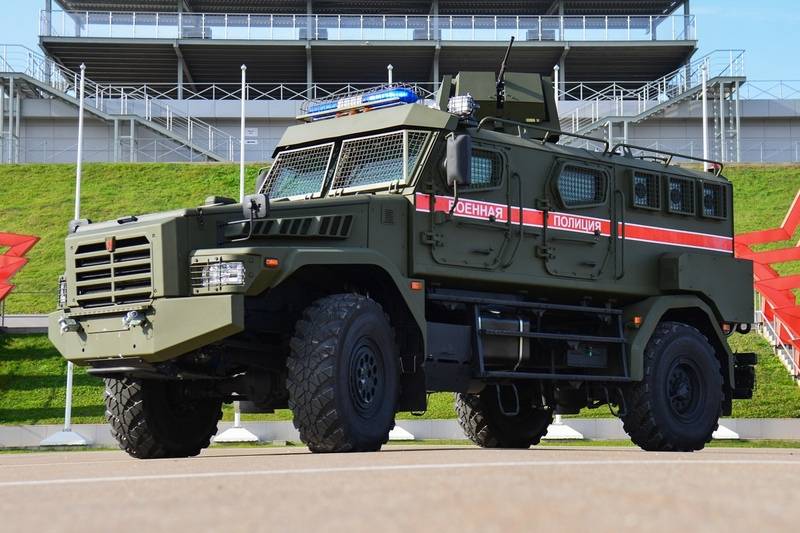 The first batch of Patrol armored vehicles entered service with the military police. The solemn ceremony of handing over the vehicles took place at the Alabino training ground in the Moscow region. This is reported by the Ministry of Defense.

Today we are adopting armored vehicles "Patrol", which have already been successfully tested, into service with military police units. The vehicles will be used to provide escort and protection of military convoys, patrolling and, most importantly, to protect the crew from the damaging action of small arms. weapons and explosive devices
- said the head of the Main Directorate of the Military Police of the Russian Defense Ministry, Colonel-General Sergei Kuralenko.

As they say in the message, the Patrol armored car is built on the KamAZ chassis. The body is made in the form of an armored capsule and provides protection against damage by small arms of 5,45 and 7,62 caliber. The car can withstand explosive detonation up to 2 kg in TNT equivalent under the wheels, as well as under the bottom. The gas tanks are treated with a special compound that tightens the bullet holes.

Ctrl Enter
Noticed oshЫbku Highlight text and press. Ctrl + Enter
We are
A summary of the events in the DNI and LC for the week 31.03.18 - 06.04.18 from voenkar MagGeneral Kuralenko on the situation in Syria
91 comment
Information
Dear reader, to leave comments on the publication, you must to register.