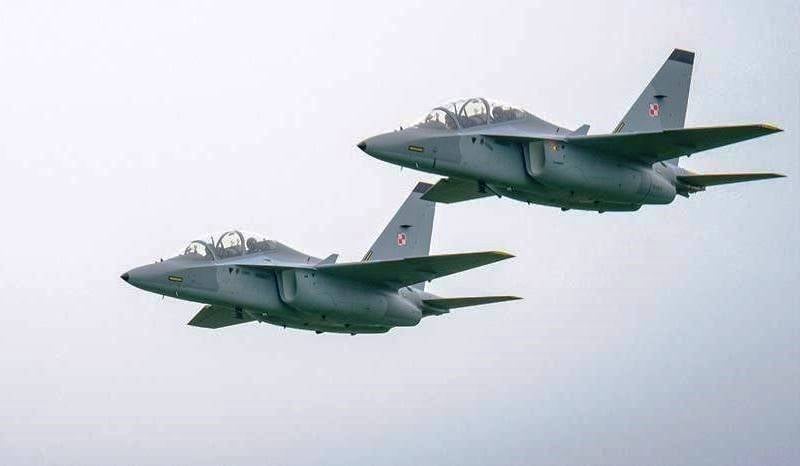 
Both planes reportedly arrived at the Damblin air base on their own, just over two weeks apart. The first plane arrived on October 5, the second on October 20. Taking into account two additional aircraft arrived as part of the 4th training aviation wing (4 Skrzydło Lotnictwa Szkolnego) on the 41st aviation the base in Demblin currently has 10 UBS M-346 (Polish name Bielik).

In total, within the framework of the agreement concluded in March 2018 between the Italian company Leonardo and the Ministry of Defense of Poland, the country's air force should receive four additional M-346 Master UBSs with delivery by October 2020. In addition to aircraft, under the terms of the agreement, Poland will receive seven ground simulators, spare parts and technical support.

Also under this contract worth $ 115 million, in addition to the delivery of four aircraft, the Polish Ministry of Defense has converted the option for four more aircraft into a firm contract worth $ 130 million for delivery in 2022.

The same contract provides for bringing 12 other Polish M-346 aircraft to the so-called NATO STANAG 4193 Edition 3 IFF standard, which is the latest version of the M-346 onboard equipment and software developed by Leonardo.

Earlier (2016-2017), the Polish Air Force received eight M-346 UBS from Leonardo under a contract from 2013 for a total of about 280 million euros. The aircraft are intended for advanced flight training of AJT (Advanced Jet Trainer) pilots and replacement of the outdated TS-11 Iskra trainer.

Thus, by the end of 2022, the Polish Air Force, after exercising the option for another 4 UBS M-346, will become, with 16 aircraft, the third largest M-346 operator after Italy and Israel.
Ctrl Enter
Noticed oshЫbku Highlight text and press. Ctrl + Enter
We are
Polish Air Force replenished with Italian combat training aircraft M-346Poland has bought in Italy still 4 training aircraft
Military Reviewin Yandex News
Military Reviewin Google News
13 comments
Information
Dear reader, to leave comments on the publication, you must sign in.