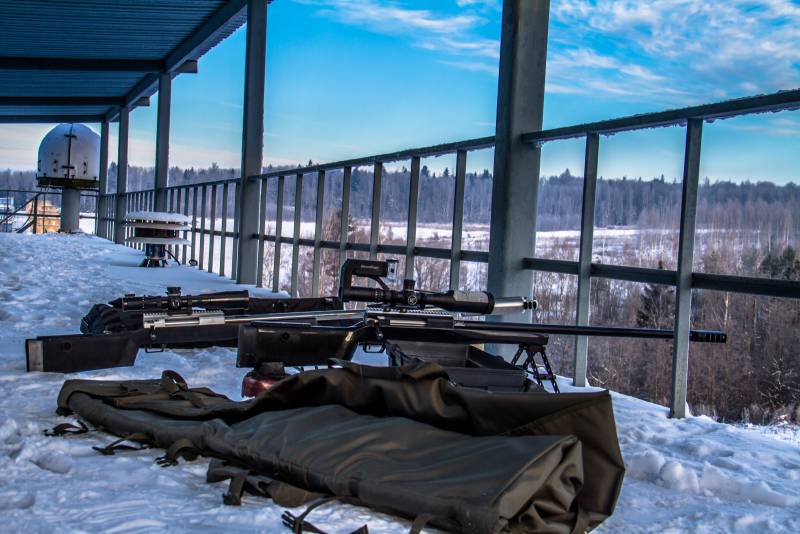 The sniper rifle is rightfully considered weapons professionals, bringing imminent death to the enemy in a situation completely unexpected for him. The struggle to improve the combat qualities of these means of destroying enemy manpower has been fought since the moment they were separated into a separate class of weapons, whose tactical and technical characteristics were "sharpened" for the performance of very specific tasks. In this case, increased requirements, along with accuracy and reliability, were also put forward for the range of sniper "trunks".


Generally speaking, the birth of sniping as such is considered the American Civil War in 1861-1865. It was then that craftsmen were found who managed to adapt an optical sight to ordinary rifles and thereby solve the problem that prevented firing at really long distances. When trying to aim at a target that was more than 700 yards (630 meters) away from him, the shooter was faced with the fact that the front sight of his weapon was visually larger than the enemy, making aiming impossible.

Nevertheless, there is evidence that even at the end of the 1200th century (in particular during the Crimean War) among the British shooters there were those who, with the help of especially long-range rifled fittings, managed to hit a target at a distance of 100 yards (more than a kilometer). For those times, accustomed to the aiming range of smooth-bore guns of a maximum of XNUMX meters, this was a fantastic achievement.

The real heyday of the sniper business (and the rapid development of the corresponding weapon) came at the beginning of the twentieth century. Mauser and Mannlicher, Enfield and Remington Mannlicher, Krag and Schmidt-Rubin - in this area almost all the "grandees" of the then arms business tried their hand. The aiming range of the best examples of sniper rifles of this generation was already approaching two kilometers. In this regard, the so-called Boer Mauser of the 1896 model was especially appreciated by professionals.

Both rifles, which became rivals on the fields of the Great Patriotic War, met the same range parameter: the Russian Mosin "three-line" and the German Zf.Kar.98k. All the same two kilometers was actually an unattainable limit. Yes, it was possible to improve the sights, making the shooter more "farsighted", but seeing the target at a glance does not mean hitting it. Used by snipers, the Soviet cartridge 7,62x54 mm and the German 7,92x57 mm, with all their power, simply exhausted their ability to deliver a bullet to an even greater distance despite the force of gravity and the wind. The laws of ballistics are harsh and cannot be trampled on.

The "second wind" to the development of the range of sniper rifles was given by their "distant relatives" - anti-tank guns, which by the second half of the twentieth century were slowly turning into an "endangered species". Generated by the appearance of the first samples of armored vehicles during the First World War, they more than successfully passed the Second, especially in the hands of our glorious fighters tanks... However, the rapid improvement of the protection of combat vehicles, in particular the appearance of dynamic armor, which was not capable of hitting every artillery shell, threatened to send them to the armory's dump forever. stories.

As far as is known, the first idea to cross a sniper and an anti-tank rifle was invented by the Americans, the craftsmen from the arms company Research Armaments Prototypes (RAP), who were approached by the representatives of the Pentagon with a corresponding proposal. At the same time, the resulting "hybrid", the AI ​​M500 rifle chambered for 12.7x99 mm NATO (.50 BMG), was considered primarily as a means of destruction not of manpower, but of enemy equipment. However, it was initially considered as a means for combat work at long and ultra-long distances. The initiative was taken up, and soon in the same USA they created the famous Barrett M82 for the same ammunition. The rifle has many modifications, the most modern and perfect of which is the Barrett M99. For a sniper armed with it, it is not a problem to hit targets even at two and a half kilometers.

In fact, all modern long-range sniper "barrels" are variations on the same theme: anti-tank rifle with optics. These include the Hungarian Gepard M1, which is considered the best in its class, chambered for 12,7x108 mm, the Austrian Steyr HS .50, which works both with the previously mentioned .50 BMG, and with the "native" .460 Steyr (11,6x90 mm), the Swiss OM 50 Nemesis (again under 50 BMG), British Accuracy International AW50 chambered for the same cartridge. All of them guarantee confident destruction of the enemy at distances of 2-2,5 kilometers.

Until recently, the championship in the field of range was held by the Americans. For example, the creation of the masters of the Anzio Ironworks company, the Anzio 20-50 Rifle tactical rifle, according to the declared performance characteristics, easily gives an effective shot at a distance of 3,2 kilometers with a bullet flight range of 4 kilometers and a half. This is when using a truly monstrous cartridge of 20x102 mm.

However, in 2012 our gunsmiths still managed to climb the first step of the podium. Until that time, the most long-range Russian sniper rifles were considered OSV-96 and ASVK, which had a target destruction range of up to 2 kilometers. However, the SVLK-14S "Twilight" (large-caliber Lobaev sniper rifle) created in Russia has rightfully won the title of ultra-long-range one!

The officially recorded record for her is hitting a target at a distance of more than 4,2 kilometers. The shot was fired using 408 Cheyenne Tactical ammunition (caliber 10,3x77 mm). Well, now all that remains is to develop an appropriate domestic cartridge for this miracle of technology - and we can assume that in the field of sniper weapons we have wiped off the Americans' nose.

Ctrl Enter
Noticed oshЫbku Highlight text and press. Ctrl + Enter
We are
Commentary on A. Petrov's interview “Fire and Tactics in the Russian Army: Another Look”What you didn't want to know about England
26 comments
Information
Dear reader, to leave comments on the publication, you must to register.