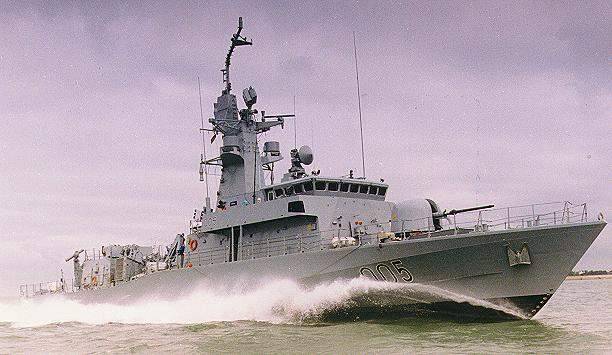 According to Ukrainian military publications, London will provide Kiev with a loan of $ 1,6 billion (£ 1,2 billion) for a period of 10 years for military needs. And supposedly with this money, Ukraine will be obliged to buy 8 missile boats from Britain. In fact, this is a typical British imposition on the dark aborigines of the "white elephant" in the form of an outdated cruiser or battleship, so fashionable in the British Empire at the time of its power.

The first question that comes to mind is: where does the United Kingdom have so much money, which has gotten involved with Brexit and does not have enough money even for its own army in its current extremely curtailed form? And who is planning another cut on the half-dead body of its decayed military machine? One of the cherries on the future cake will most likely be a triumphant release from "obsolete and unnecessary" tanks "Challenger-2" and BMP "Warrior".

But, apparently, giving money to the Ukrainian elite seems more important to the government of Boris Johnson than to its armed forces. Moreover, the money will eventually end up in the pockets of British corporations, for which, apparently, everything was started. So what kind of boats are these and shouldn't the Ukrainians dance the hopak to celebrate the next "peremogi"?

It has long been noticed that the cycle of the turnover of the merciless wheel of fate, which constantly turns the next Ukrainian "change" into Ukrainian "zrada", is gradually decreasing. But in this situation, even the narrators and akyns of Ukrainian "peremogs" in the media and blogs somehow became depressed. Painfully ambiguous information is leaking out.

The fact is that the boats, as reported in Ukraine, will be 50 m long and have a standard displacement of 400 tons, and the project developed by the Vosper Thornicroft company (then became part of the VT Group and is now controlled by BAE Systems Surface Ships) fits these parameters. ) back in the second half of the 80s, especially for export. It is called the Vita (or Barzan-class), and four such boats were sold to Qatar in the late 4s. Such a boat is armed with a 80-mm gun mount "Oto Melara Super Rapid", 76 subsonic anti-ship missiles "Exocet" MM-8, MANPADS "Mistral", anti-aircraft artillery complex (ZAK) "Goalkeeper".

This project "Vosper Thornycroft" had enough relatives. The Omani Navy was supplied with 4 Province-type missile boats (named after the provinces of the Sultanate), with very similar characteristics - 390 tons, 56 m long, armed with the same Italian gun mount, also 8 (in part only 6) MM-40 Exocet anti-ship missiles, 40-mm anti-aircraft gun mount "Breda" Italian production. These boats were delivered in the first half of the 80s, and they themselves are based on the project of boats of the Ramadan type for the Egyptian Navy, which have been supplied since 1981. That is, the project is quite ancient. Two more boats of the same design as for Oman were sold to Kenya in 2, and they differ in armament: 1987 Otomat anti-ship missiles, another set of small-caliber artillery. 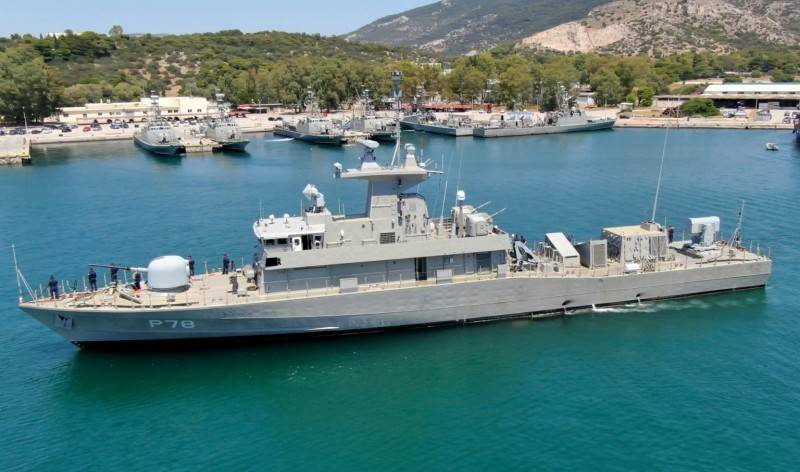 There is also a larger modification, the Super Vita, also known as the Roussen-class, such ships were and continue to be built for the Greek Navy. These ships are 580 tons of standard (668 tons of full) displacement and 62 m in length. navy, most likely, would be called small missile ships, MRK. The displacement is slightly less than the "Karakurt" currently under construction in large quantities. And with weapons there is about the same as those of the above boats. The same 8 Exocet MM-40 subsonic anti-ship missiles, the same Italian gun mount, two 30-mm cannons, but there is a RAM-type self-defense air defense system with 21 short-range missiles RIM-116. An amusing came out with these boats история... The boats were built in Greece, of course, with a gradually increasing degree of localization, in two batches of 3 and 4 pieces. And if the first three were put into operation quickly - in 2002-2004. launched, and in 2005-2006. put into operation, then the second batch went badly - the first pair was launched in 2005-2006, commissioned in 2010 and 2015, respectively, the third boat, laid down with the rest, was launched in 2018, and put into operation in operation two months ago! The last boat was launched a week after the commissioning of its predecessor - on August 5 this year, but it is not known when it will be commissioned.

In general, some of these "wonderful" and "modern" ships were offered (or not especially and asked their consent) to the dimwitted Kiev bosses. Considering how Zelenskiy lay in front of Johnson and even the head of MI6 intelligence, with whom the president of the country had to meet somehow out of order, it was probably not difficult to get their consent. In this regard, the "Patriots" recall Zelensky's virtuoso playing the piano, and the stories that he, at his age, turns out to be "not a sucker."

The sadness-melancholy of the Cossack seized

In the near-war circles of non-brotherly neighbors, they somehow immediately became sad. I somehow don't want to buy an ancient project that has nothing to do with stealth technologies and generally modern technologies, especially at such a price. Perhaps the outlines of these boats will be modernized, the sides, as usual, will be filled up, but it will be based on the same project. Which of the same "Lightning-M" pr. 12411 will be better only because it is new, and what will be at hand, if any, but in all other respects it will yield to it. And the price tag turns out to be solid, and even the assertion that only the first 2 boats will be built by the British, and the rest will supposedly be built at Ukrainian shipyards, does not comfort the "patriots". First, the most adequate of them understand that this deal, coupled with the supply of Mk-VI patrol boats from the United States and the sale of the ancient "Islands", puts an end to Ukrainian attempts to build something on their own. The end of the eternal epic of sawing pennies on the "construction" of the corvette "Volodimer the Great", and Poroshenko (from the shipyard "Kuznya na Rybalskiy") missile boats of the "Lan" type, which he pushes through. To build these boats at Ukrainian shipyards, they will have to be lifted from the ruins, recruited and trained workers and engineers, and purchased equipment. How long will it take? As if the Greek anti-record with boats was not beaten, and many times. Or they just abandon the project.

In addition, Ukraine is unlikely to be allowed to complete the assembly cycle of ships, but will be instructed to weld the hulls, well, there is something else, on trifles. And all the rest will have to be purchased, and then spend a lot of money on maintenance and spare parts. With the integration of Ukrainian aggregates and systems, which is dreamed of in Kiev, there will also be "zrada": the British will not do this, they need to give money to their enterprises, not Ukrainian ones. And what kind of systems are they? Those that exist only in Poroshenko's dreams for installation on his desired "Doe"? There they also invented some kind of air defense system, for example, which are not and will not be. Although the Ukrainians hope that the Neptune anti-ship missiles will be installed instead of the Exocets. We also hope that they will be. Considering how the "tests" of this system were carried out, you can be calm about your ships and boats. The launches took place in ideal calm conditions (the RCS of the target from sea waves can change abruptly by 10-15 times), strictly to the side along the normal (from the viewpoint of the target, the RCS changes by an order of magnitude or more), moreover, at the target of a very solid size, studded with almost ten corner reflectors creating EPR, probably, tankers of the Aframax or Suezmax type. Such a "product" unless it misses the shore. But, most likely, the British do not want that some aborigines took their money. Better yet, the French with the Exocets.

True, the assertions of the "patriots" that if you give this money to your shipyards, they will build boats and corvettes for this money, of course, also have no basis whatsoever. They will definitely be able to "master" this money. Perhaps some of the buzz surrounding the proposed deal is being directed by those who can "master the funds" better than any English. For example, Pyotr Alekseich will definitely be able to, we believe in him.

And you, friends, no matter how you sit down, you are not suitable for sailors

Yes, and outdated boats will not give the Ukrainian Navy anything in the confrontation with the KCHF of the Russian Navy. As, however, will give nothing and ultramodern. In the pool, where every corner is shot by supersonic Russian anti-ship missiles, where our aviation, these boats will not fight anything. And, taking into account the real "Cossack" fighting spirit of the "wetcoats", which was clearly manifested in the "victorious" for the Ukrainian Navy, the "Kerch battle", everything will boil down to the fact that then, having received more ships from captivity, the Ukrainians will accuse the Black Sea sailors of stealing now already British plumbing.

But this is at best. Because a much more likely option is that in the event of another collision with the Russian Navy, no one will bother and clatter with larger and armed ships, they will simply be drowned without any fancy and games in "Press him" and offers to surrender the ships. Even the “patriots,” except for the most frostbitten ones, understand this implicitly, so they feel sad. The safest type of ship for the Ukrainian Navy is the Cossack Seagull. They will simply laugh at her and will not touch her. True, the reenactors may attack.

Ctrl Enter
Noticed oshЫbku Highlight text and press. Ctrl + Enter
We are
Notes of the Colorado Cockroach. Part of 13Dmitry Medvedev. Russia and Ukraine: life under the new rules
123 comments
Information
Dear reader, to leave comments on the publication, you must to register.