A lone sailor and rafts from everything at hand 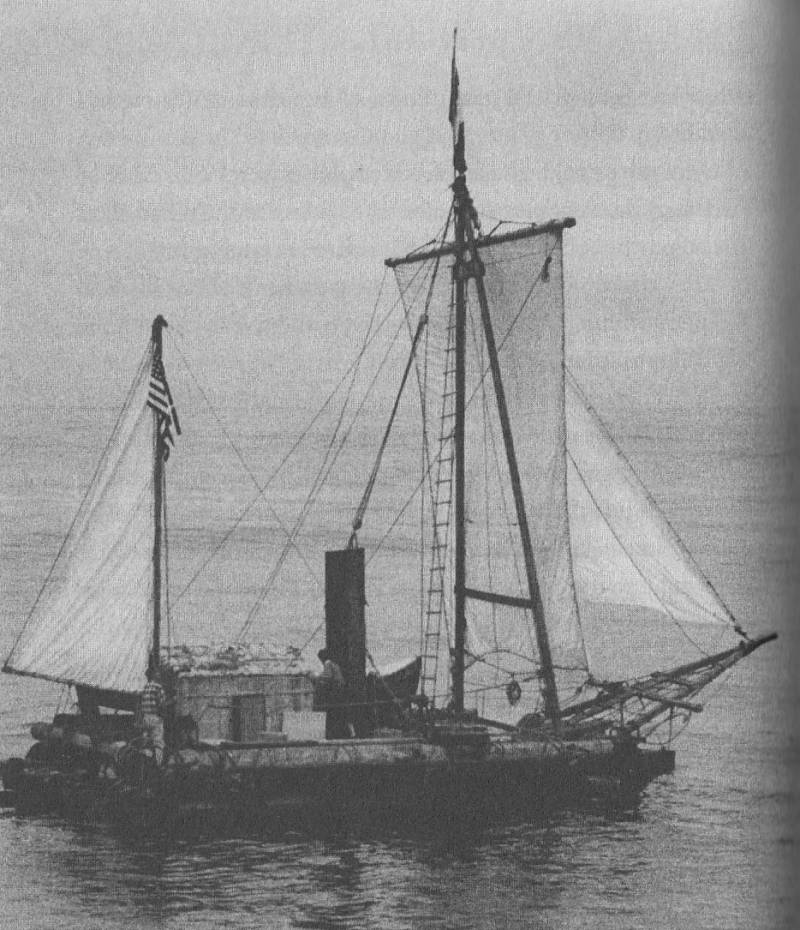 So go ahead, for the nomadic gypsy star,
To the blue icebergs of the cold seas
Where ships sparkle from frozen ice
Under the glow of the polar lights
R. Kipling. Behind the gypsy star

In the fall, on the eve of freeze-up,
Fishing boat, having gone to the fishery,
Will find a piece of his immortal glory -
Fragment of a charred wing.
K. Simonov. Old man. In memory of Amundsen

Scientists and travelers. After the release of material about the raft "Ebora" many readers of "VO" in the comments expressed in the sense that by his sailing on the raft "Kon-Tiki" Thor Heyerdahl, in fact, opened two new directions at once: one in science and the other in sports. The first is sailing on replica ships to prove that such sailings in the past were feasible, and the second - just sailing for the sake of, so to speak, sporting interest, someone on what and alone across the seas and oceans. True, the pioneers in sailing across the ocean on rafts were all the same three Americans, who on the raft "Nonparelle" from three rubber cigars crossed the Atlantic Ocean back in 1867! But their swimming remained without consequences, except that they proved that rubber does not corrode by sea water. 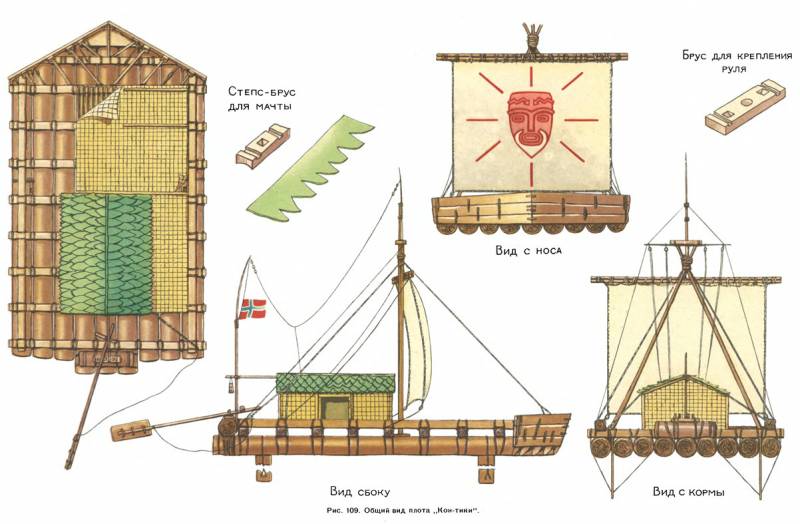 Raft "Kon-Tiki" Thor Heyerdahl. Page from some old album for ship modelers
But after the voyage of Heyerdahl (this is what radio and television, together with newspapers and magazines) mean, humanity was simply captured by a wave of ocean voyages on rafts. Someone, like him, decided to sail on a balsa raft, someone chose bundles of bamboo, and a raft even made of pine logs floated across the Baltic Sea and successfully completed a 250-mile journey. 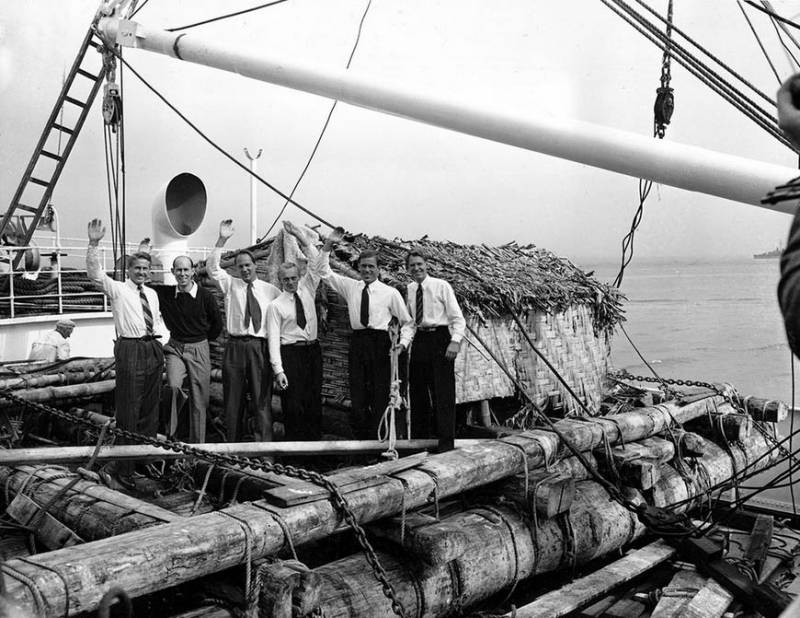 Successful finish of "Kon-Tiki". The raft is loaded onto a ship to be delivered to Norway
Well, then the solo voyages began. Someone sailed on a boat, someone on a yacht, but there were also those who chose a raft as a vessel. And one of those who fully experienced the romance of distant sea voyages precisely on a raft was William Willis, who twice, at the age of sixty and seventy, set off on a voyage on a raft with the aim of crossing the great Pacific Ocean, and in the seventy-fifth year three times in his life he challenged the waves of the stormy Atlantic, where he eventually disappeared. This man lived a completely unique life, filled with work and adventure, and so interesting that one simply cannot but tell about him. 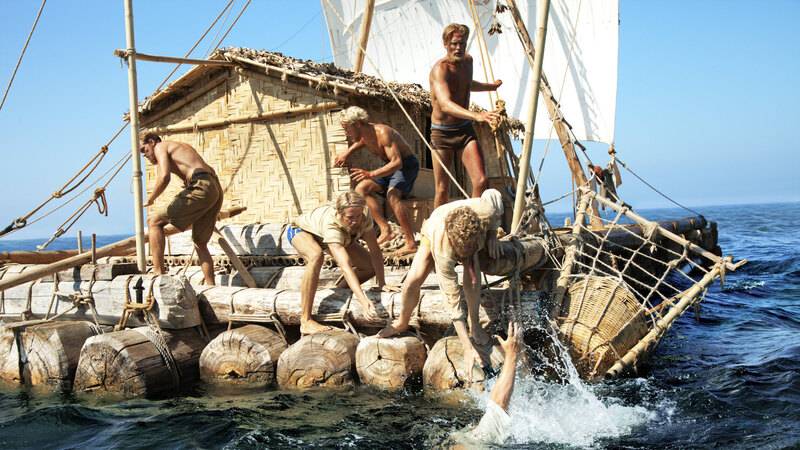 The vicissitudes of sailing on the Kon-Tiki. A man fell overboard, but there was someone there to catch him. But what if you sail alone on a raft? Fell into the water - that's all! You will not be able to catch up with the sailing raft by swimming ...
William Willis was born in 1893 in Hamburg and spent his childhood there. Parents, immigrants from Saxony and Bohemia, had nothing to do with the sea. But this is how it happens: their son got sick with the sea. At the age of fifteen he left home and then made his first trip: in 1908 he hired a cabin boy on a sailing ship and even took part in an expedition to Cape Horn. Since 1912, he lived in the United States, traveled around the country, changed many professions: he had to work as a loader and a lumberjack, work as a trackman and even as a mining engineer. He sailed on the Great Lakes and was engaged in fishing, drawing cartoons for newspapers and writing poetry. He also happened to be a sailor on a tanker, chop wood in Canada, work in a mine in South America. In Alaska, he was a hunter, in the States - a metal worker and a dockworker. By the way, he did not just write poetry, he even managed to publish several poetry collections. Even as a paramedic, and so he managed to work, which means that at least somehow he knew medicine ... Everyone who knew Willis noted that he was distinguished by simply great diligence, perseverance in achieving his goal, and he was also courageous and modest human. However, no one ever doubted his courage even without these testimonies, because a person who does not possess this quality would hardly dare to embark on a raft across the ocean alone! 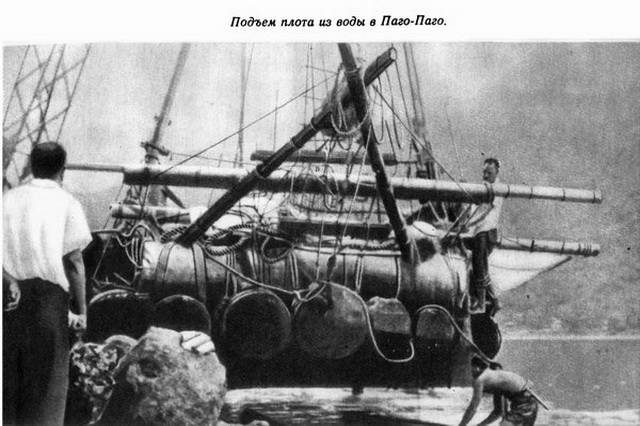 The raft by William Willis
This or that event affects different people in different ways. So the trip of Thor Heyerdahl, made by him in 1947 on the Kon-Tiki balsa raft with a crew of six, prompted Willis to go on the same one to the islands of the Central Pacific Ocean, but only this time alone! He convinced his friends and family that age is not a hindrance in this matter; he built a raft from thick logs of the lightest tropical tree - balsa (that is, in financial terms, he did not live in poverty, since this wood, and even in such volumes, is not a cheap thing! ) and went out on his brainchild to the Pacific Ocean.

The raft was named "Seven Sisters", measured 10 × 6 meters and was actually assembled from seven huge balsa shafts, 0,75 meters in diameter each. They were connected to each other with a 40-mm strong Manila cable, and for greater reliability they were also connected by three mangrove trunks-crossbars, on top of which was laid a flooring of smaller balsa logs, “only” half a meter in diameter, also connected by a cable between themselves. On top of this planking was a deck of bamboo trunks split lengthwise. The bulwark was also made up of four balsa barrels. 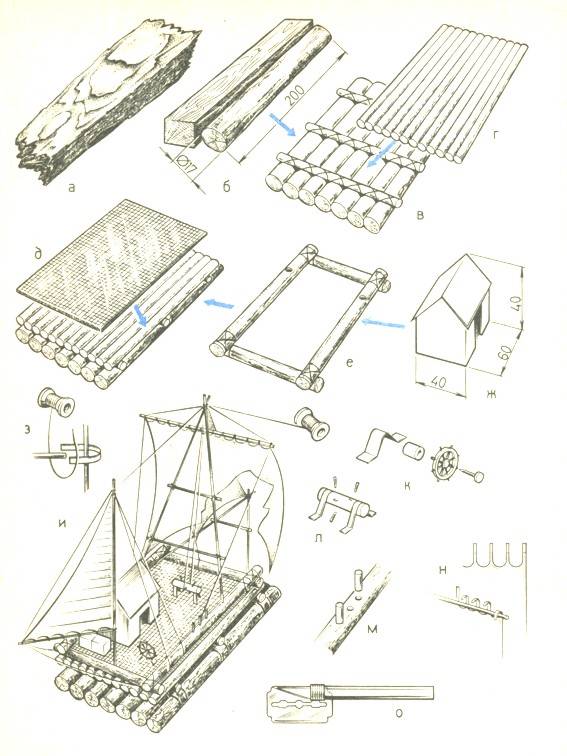 A drawing describing the manufacture of a model of Willis's raft from the author's book "For those who love tinkering" (M., Enlightenment, 1990). Since then in the USSR it was bad with balsa, it was proposed to cut out blanks for raft logs from thick pine bark, since pine trees with such bark grow here a lot everywhere
Willis' voyage began on June 24, 1954 and lasted 115 days. It was complex, filled with dangers. It was difficult to control the raft alone, besides, during the voyage, the navigator had a hernia, and in order to correct it, Willis had to pull himself by the legs, tying them with a rope, to the mast! True, along with the brave traveler, there were animals on the raft: Mika's cat and Ekki the parrot. The raft covered a distance of 6700 nautical miles during its voyage. And it is not surprising that the press called this voyage the most unparalleled voyage of the XNUMXth century, and Willis the most courageous among all other solo sailors. Well, the inhabitants of the islands of American Samoa, where he eventually got, gave him the honorary nickname of the Captain of the Great Seas, and his raft was placed in front of the government building on the island of Pago Pago for all to see. 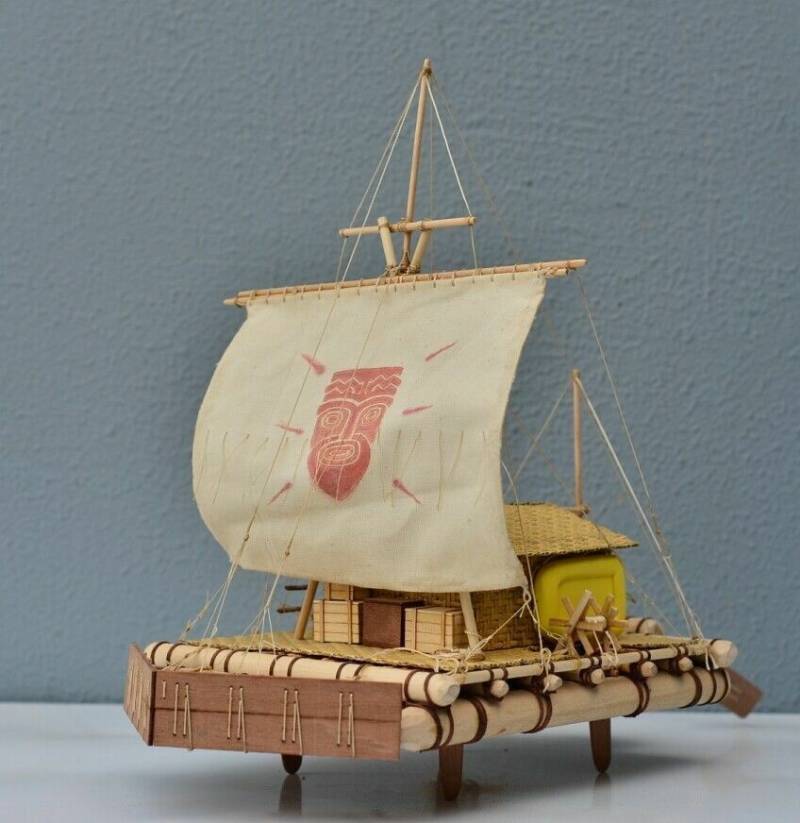 Today the model of the Kon-Tiki raft is produced by the Italian company Mantua, and it is exotic! Scale 1:18, that is, the model as a result turns out to be quite large, and it is not too difficult to work on it
Apparently, Willis's passion for such voyages has eaten into his blood, because in 1963-1964, on a trimaran raft, out of three metal pontoons filled with polyurethane, he again crossed the Pacific Ocean alone: ​​from Callao to Apia (Western Samoa) in 1963 , and from Apia to Tully (in northeastern Australia) in 1964. He then described all his voyages in books that were translated into many languages ​​of the world, including Russian. Then he three times, in 1966, 1967 and 1968, undertook a solo voyage across the Atlantic Ocean no longer on a raft, but on a boat under sail. The last of these three voyages was his last. The brave sailor went missing, leaving only a damaged boat, his passport, books and diary entries. This is how this venerable old man ended his life, whose courage was beyond doubt. 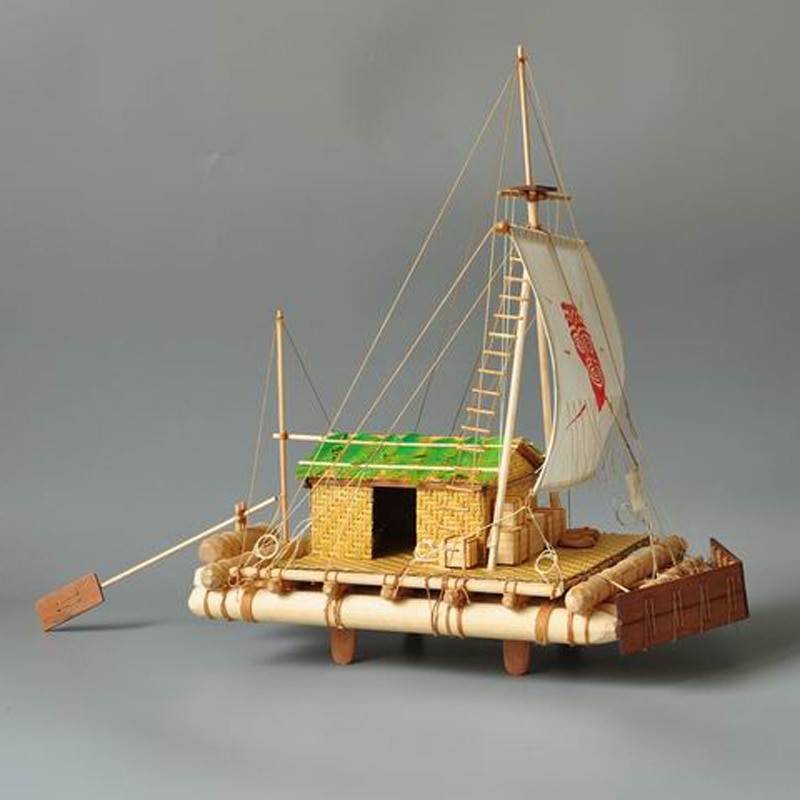 And she turns out to be very beautiful in the end!
Well, after him there were many more people who built rafts from a variety of materials and sailed on them in the most different seas and oceans.

It is interesting that, using a variety of materials for the construction of ocean rafts, none of their creators thought of using them for advertising, as well as for propaganda purposes. To make a raft from the bodies of decommissioned medium-range combat missiles and go on it along a route that runs near naval bases, and at the same time advocate for general disarmament? .. Give people leaflets, booklets, give interviews to journalists, urge rockets, take care of the poor? .. People have always liked Don Quixote, but Don Quixote on a raft is something special and therefore interesting, like anything unusual. Then it will be possible to write a book about this voyage and make a lot of money.

Pipes for pipelines laid on the seabed are also excellent material for such rafts. We take scraps, order three to five cones "at the expense of the company" for the "bow", and "circles" for the stern, put the manufacturer's logo on the pipes and sail ourselves across the ocean, determining the position using the GPS-navigator provided ... eating the products of the company ... and also carrying out daily TV shows from our raft with advertisements for swimwear, sunscreen and fishing gear. This kind of mainstream is welcomed by the average man in every possible way, but the fact that this is an excellent advertisement is also obvious. 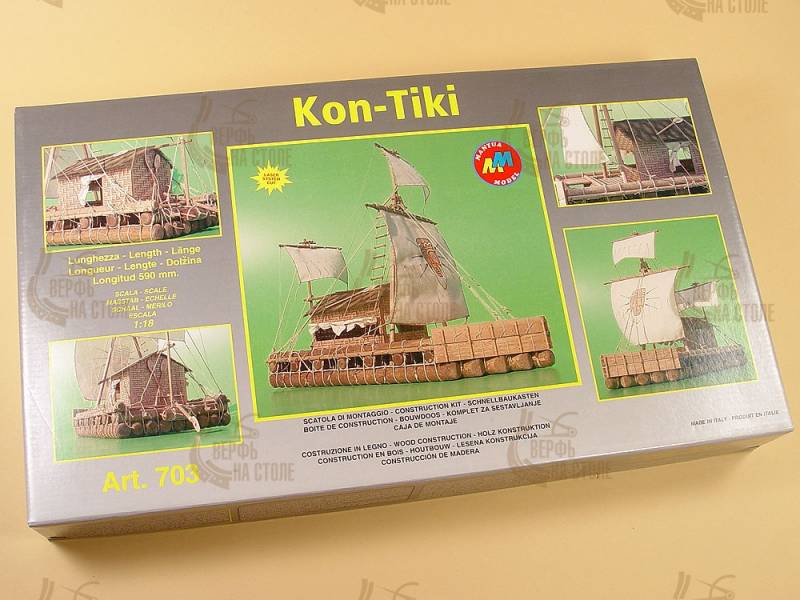 Mantua set
By the way, it is with the sets of rafts that you can start your own ship modeling business. It is not difficult to make logs on the machine today, and for a start, you can release a series of prefabricated models of rafts, even from paper. Special episode for schoolchildren "Get away from me!" with the simplest homemade products for delivery to school at the first request of the teacher. Especially teachers sin this in elementary grades, well, let the children make rafts for them. Bamboo - shashlik sticks. Boards - stirring sticks for coffee. Then threads, instructions, a box ... Put it all together and sell! And also an interesting story about this raft for the general development of the child is attached to each model! Common name: Traveler Rafts. 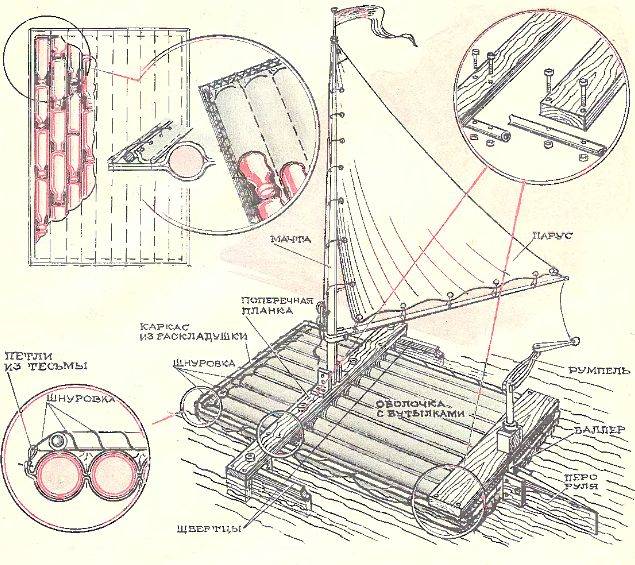 But such rafts from bottles are not at all difficult to make at the stations of "Young Tourists" and sail on them along the local rivers and lakes. Sponsored by local breweries !!!
In ancient times, rafts were made from leather wineskins, clay jugs (turned upside down!) And even hollow pumpkins. And if so, why not go somewhere on a raft of ... soccer balls? On a raft made of plastic containers for fuel or chemically active substances from the company ... And even plastic bottles or duralumin kegs from under the company's beer ... such and such? There is no need to repeat sailing on balsa rafts today. Here are the missile bodies - that's it!

Ctrl Enter
Noticed oshЫbku Highlight text and press. Ctrl + Enter
We are
Chernobyl notebook. Part of 3Father told
277 comments
Information
Dear reader, to leave comments on the publication, you must to register.