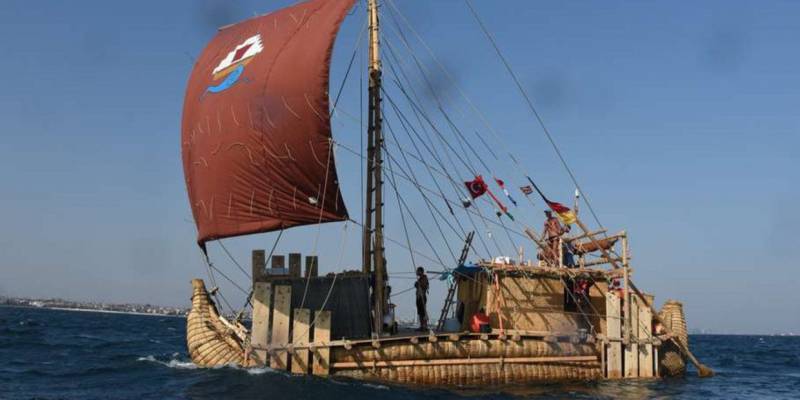 Argo!
Is your way closer
What is the Milky road?
Argo,
What losses are crying about
Bird on the opposite side?
Sail over you
Raised by fate -
This is the flag of separation
Wanderings the eternal banner! ..
VIA "Iveria". Song of the Argonauts from the movie "Merry Chronicle of a Dangerous Journey"

Ancient civilization. So we are in Turkey. But only not in today's, but on the lands of ancient Phrygia, Lydia, Lycia, whose wealth is such that it causes envy among the Continental Greeks, and such that they come up with history about King Midas. But gold is only one of the reasons, surprisingly. There is also another: the ruggedness of the coastline of the Asia Minor coast. There are many small islets, bays, and many more convenient harbors than on the peninsula of mainland Greece. It is easier to swim here and more convenient to stick to the shore, here you can always take refuge in a storm. That is, already at that time distant from us, the main trade route went not so much along the shores of the Balkan Peninsula, but along the coast of Asia Minor. And apparently, it was not for nothing that ancient Troy became so rich at that time, awakening the primitive greed of the Achaean leaders. There was a reason for that and it lay in the convenient geographical position of the same Troas.

Yes, but where could sailors sail along these shores in the era of Paris and Agamemnon, or even earlier? And most importantly, on what? And today we are just trying to tell about it.

As you know, the idea of ​​experimentally proving that in ancient times the oceans united people, and did not serve as an insurmountable obstacle for them, first came to Thur Heyerdahl's mind, and has never left it since then.

As you know, he made his first voyage on the Kon-Tiki balsa raft back in 1947, followed by sailing across the Atlantic on the Ra and Ra-2 reed boats. 30 years later, again on a reed ship called "Tigris", he went to sea to prove that the ancient Sumerians could sail on such ships from the Persian Gulf to Africa.

Nobody denies his contribution to science, but in this case there is one "but". We cannot accurately record the elements of influence that, as he believes, rafts and reed boats brought across the oceans. What do the inhabitants of South America or Mexico have that would say: yes, there were contacts with Ancient Egypt, these artifacts unambiguously confirm this! That is, there seems to be a lot of circumstantial evidence. The same legend about the bearded god Quetzalcoatl ... But where did he come from exactly? And was he a Scandinavian, Breton, or who? We do not know and will not know. That is, there is training for the mind, but the scientific result of these voyages, in general, was minimal. In addition, all of his travels were one-way voyages. His ships failed to return back ... 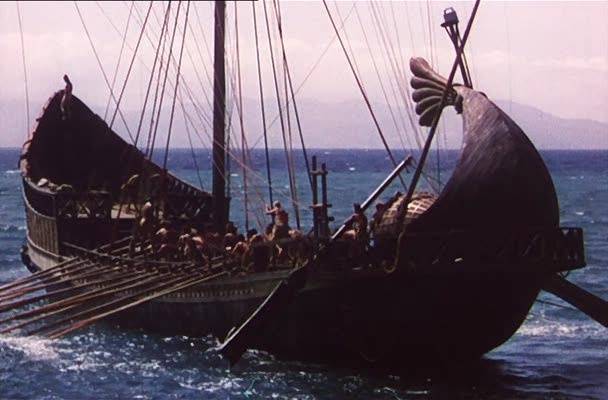 Of course, the Greeks did not immediately begin to sail on such ships, the images of which we know from their images on vases and finds of underwater archaeologists. Still from the film "Odyssey's Wanderings" (1954)
In the case of the Mediterranean, things are different. There is the island of Cyprus, on which cattail reeds grow. And there are finds on it that unequivocally say: these products were brought from Egypt. And there are texts talking about the trade of Cyprus and Egypt, as well as drawings of Cretan shields in Egypt and much more that tells us: there was an effective sea trade between Egypt and the Mediterranean Sea, or rather, its islands. But what about Troy again? What did she climb on? This means that trade routes already in the Bronze Age went even further north, into the Black Sea. And already from there, something very valuable diverged across the Mediterranean basin and fell into Egypt. And this path went, which is also important, past the shores of Asia Minor. 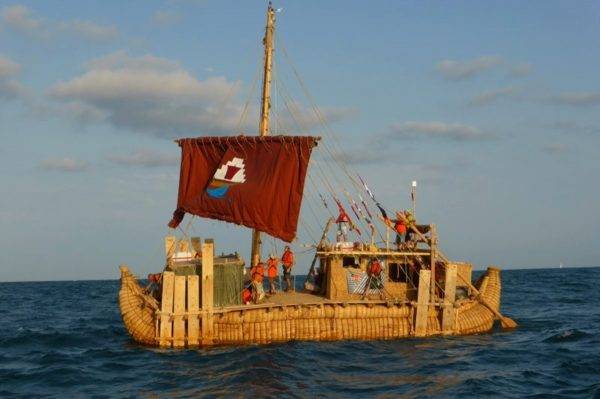 "Ebora IV". Who knows, maybe this is what the ships of the ancient sailors of the Mediterranean looked like.
And so, in order to test the possibility of sea trade between Egypt and the Black Sea, which, incidentally, was reported by Herodotus, a certain Dominik Gorlitz gathered a team of like-minded people and built a reed boat "Ebora IV" *. The fact is that, in his opinion, epoch-making innovations in metallurgy, unlike many other achievements of ancient civilizations, occurred not in the East, but in the Balkans, Anatolia and Transcaucasia, where there was available raw material for smelting the first metals. There is evidence that for the first time in the history of mankind, bronze, gold, iron and even platinum were smelted here, and then it was from here that metallurgy spread further, to the cultural centers of South-West Asia. 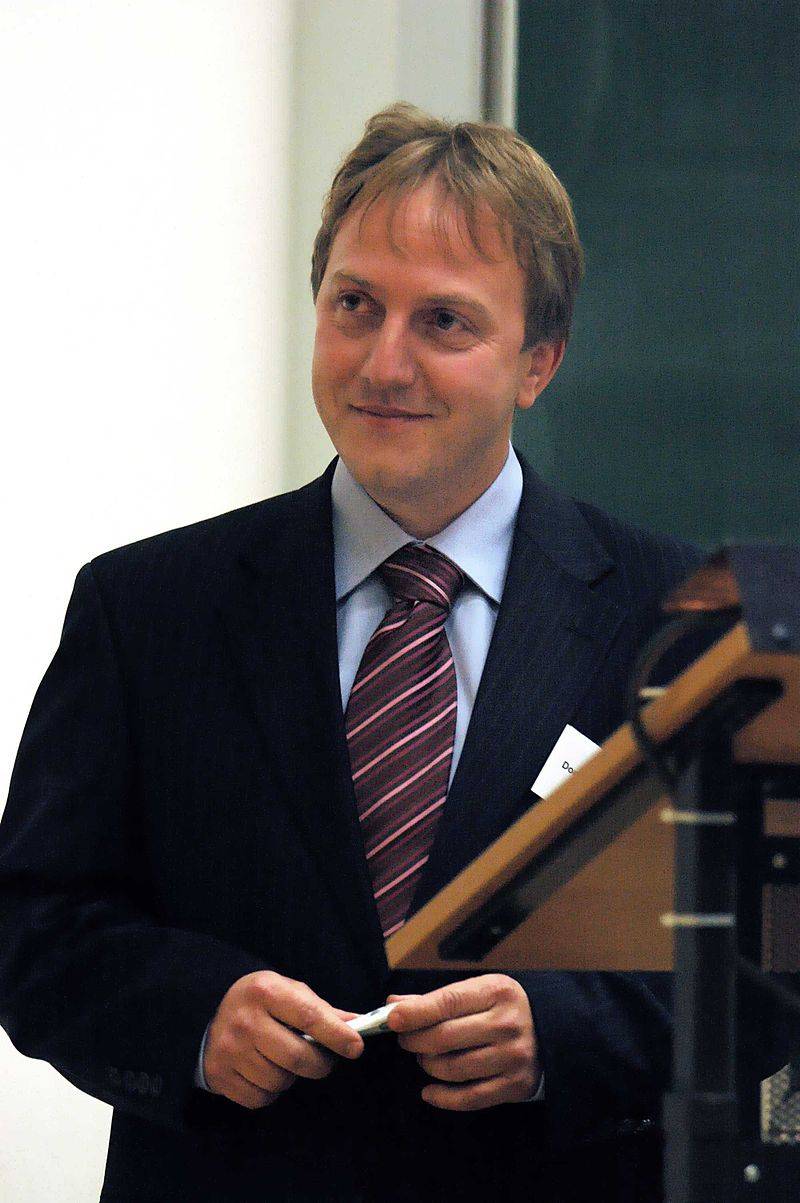 Dominik Görlitz, "heir" of Thor Heyerdahl
Well, the ancient sailors could swim again on reed boats. Well, he decided to build such a boat and sail on it!

The "boat" was built near the Bulgarian port city of Varna under the leadership of the Bolivian Aymara Indians. They have already built the famous Ra-2 and Tigris rafts for Thor Heyerdahl. More than 75 ABORA members from nine countries also participated in the construction of the building. Unlike Thor Heyerdahl's reed boats, the new sailing vessel was equipped in accordance with ancient rock carvings with vertical centerboard keels, representing vertically inserted planks at the bow and stern. These "planks" work like a modern keel and allow the reed boat to sail across and even slightly against the wind. This was the only way to navigate such difficult waterways as the Dardanelles or the Cyclades region. Another highlight was the ship's passage through the Santorini caldera, where his crew sailed between the steep cliffs of a volcanic crater in variable winds. Then from Santorini "prehistoric sailors" headed for the Lycian coast to finish their sea voyage after more than 1500 km of journey in the port city of Kas near the ancient city of Patara. There he was pulled out of the water and ... erected as a monument: tourists can see him. 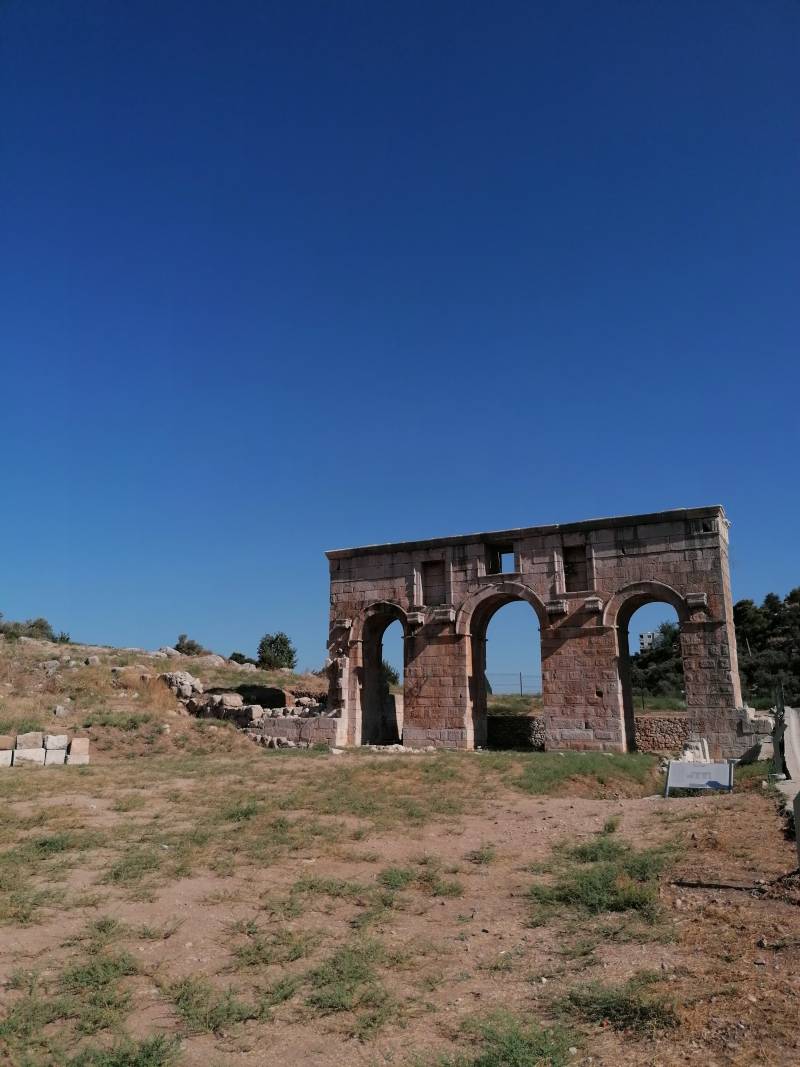 Patara Gate. In general, the Turks are very careful about their ancient Greek heritage. In Side, for example, the archaeological excavations in the city are built into the pavement, but covered with a transparent stack. You walk, and ancient life passes under your feet!
Goerlitz set himself the goal of showing that walking at an angle to the wind, tacking, as modern sailors say, is not something special for simple vessels like reed boats (though this boat weighs 12 tons!). The main thing is to build it correctly, “equip” it and know how to control its sailing and steering equipment.

The chronology of Goerlitz's expeditions on reed boats is as follows.

"Ebora I", 1999 For the first time sailed from Sardinia to Corsica and headed for the mouth of the Elbe. This was the first expedition on a reed boat. Gorlitz says that this structure had a mast too precisely centered, so it could move at an angle of no more than 90 ° to the wind, but not go against it.

Ebora II, 2002. She first demonstrated the ability to move back and forth in relation to the wind. The expedition sailed in the triangle Egypt - Lebanon and Cyprus. For the first time in our time, it was possible to experimentally prove that a prehistoric traveler can return to the starting point of the voyage. After all, the same Heyerdahl, by the way, never proved it. None of his ships ever returned.

Ebora III, 2007. It was also organized in order to prove the possibility of travel to America and back: in fact, it was a question of how those who came to the New World from the Old could return. Back then, all the experts believed that a return trip was impossible. However, Ebora III has demonstrated that a reed boat can overcome the eddies and storms of the North Atlantic and can independently return to its homeland, closing its route. Those. it was not a one-way ticket no return trip, as was previously thought. 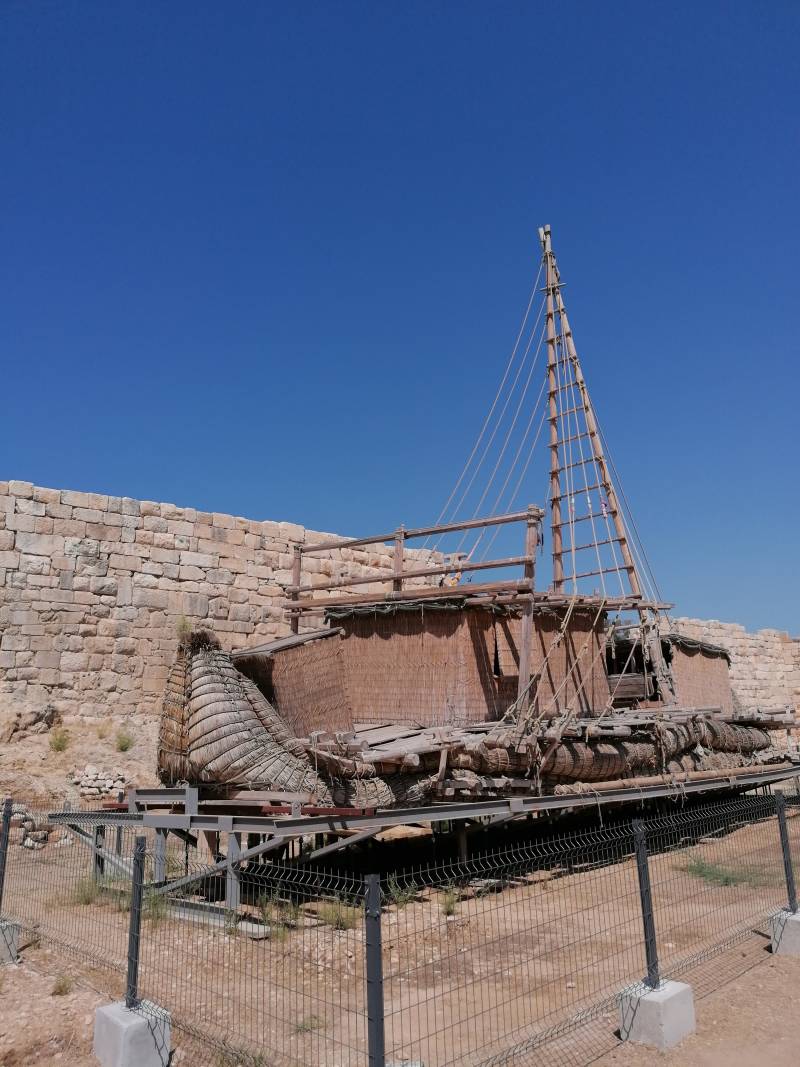 The Goerlitz ship is now installed in Patara and is a "museum ship". It is a pity, of course, that I am now not a child and did not get here at the age of 14. I remember what I was then, and I can confidently say that I would have stood near him for a long time, and then I would have decided to build something similar and repeat the voyage ... of the Phoenicians around Africa in the era of Pharaoh Necho or the route of the Baurjed expedition from I. Efremov's dilogy “The Journey of Baurjed "And" On the edge of the Oycumene "
And now "Ebora IV" has passed by sea from Bulgaria to Patar.

What did this voyage prove? Here's what: if the sea traders of that time traveled in their reed boats between the Black, Aegean and Eastern Mediterranean Seas, they could very well carry cargo weighing several tons and thus avoid the difficult and much more dangerous land route. That navigation in the Black Sea and even crossing the Bosporus and Dardanelles was also quite possible for reed boats, which has been questioned by many experts until now. Well, and the fact that the sea trade of the ancient Egyptians with distant trading partners in the Black Sea, described by Herodotus, could really exist. The same applies to the trade in Aegean obsidian from the island of Melos, which is found in many places in the Mediterranean and confirms that the exchange of goods and cultural ideas developed long before the advent of civilizations that owned a written language, in the most hoary antiquity. 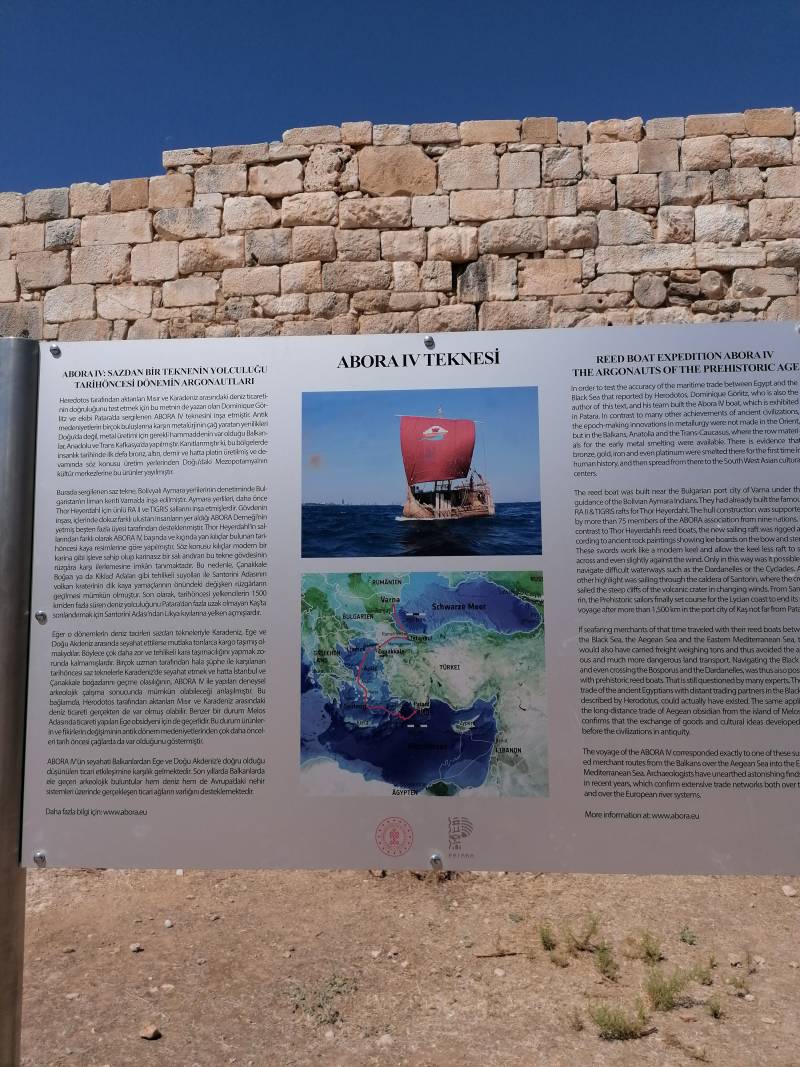 In Turkey, everything is for the people. Therefore, next to the ship there is an explanatory inscription in Turkish and English. It is interesting that in France 80% of similar inscriptions, even in museums, are only in French!
ABORA IV's voyage corresponded exactly to one of the intended trade routes from the Balkans across the Aegean Sea to the Eastern Mediterranean. In recent years, archaeologists have discovered amazing finds here, which confirm the existence of extensive trade routes, laid both along the seas and along the river systems of Europe in the Bronze Age. 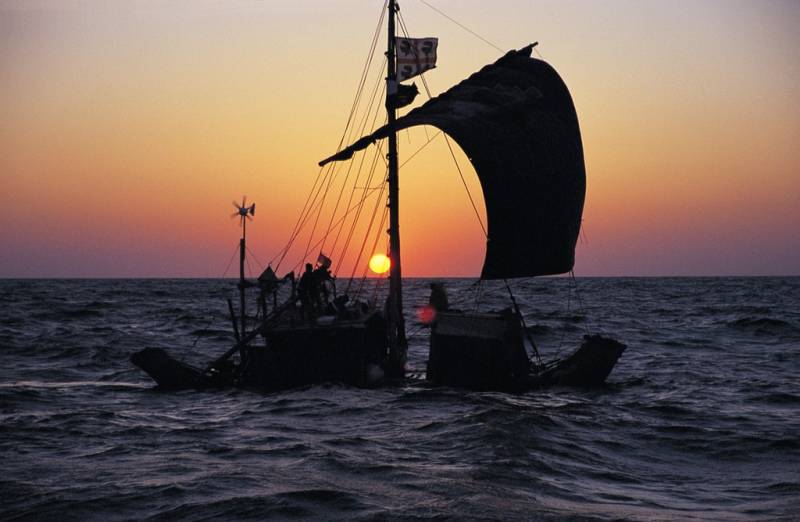 Of course, sailing on such "ships" is rather scary, feet are wet all the time! 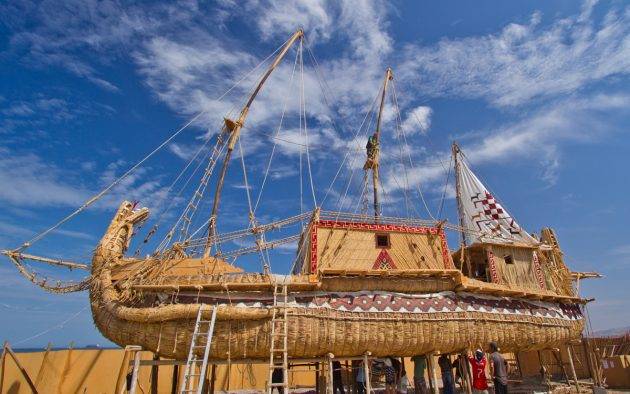 Viracocha III. Bad examples, they say, are contagious, and now the South American reed ship "Viracocha" has been built and recovered to sail in the Pacific Ocean ... 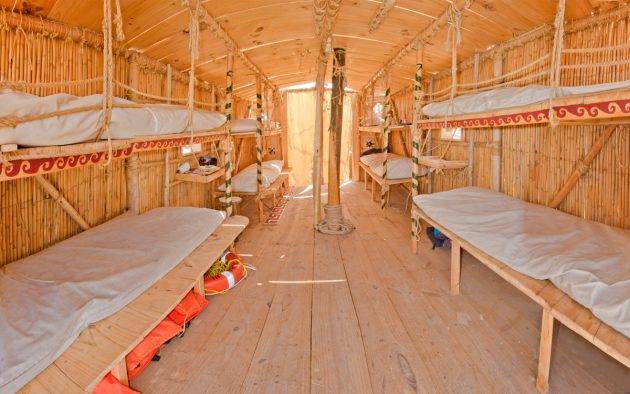 This 60-foot boat was built in Chile in 2018. The cabin inside is quite spacious! 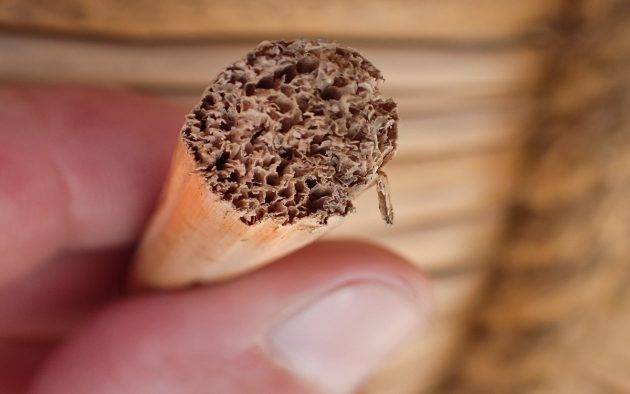 This is how a slice of totor's reed looks like
PS It's funny, but I talked about how to make a model of the Kon-Tiki raft in my very first book "From everything at hand" ("Polymya", 1987), about the model of the ship "Ra" from plastic - in the book “When the lessons are done” (“Polymya”, 1991), but about the model of a leather boat of another famous traveler-reenactor, Tim Severin, called “St. Brendan ", - in the book" For those who love to tinker "(" Enlightenment ", 1990). So this, apparently, was written to me - to be interested in exotic ships. And again I have to write about them! Well, you must!

Author:
Vyacheslav Shpakovsky
Articles from this series:
Riddle: riders on the bas-reliefs with clubs in their hands
Minoan Pompeii: a mysterious city on a mysterious island
Antique ceramics and weapons
Gold for war, the fourth wonder of the world and Ephesus marble
Homer's poems as a historical source. Antique civilization. H. 1
Croatian apoxiomen from the water. Ancient civilization. H. 2

Ctrl Enter
Noticed oshЫbku Highlight text and press. Ctrl + Enter
We are
Riddle: riders on the bas-reliefs with clubs in their handsChernobyl notebook. Part of 3
159 comments
Information
Dear reader, to leave comments on the publication, you must to register.