How Romania propelled the German army 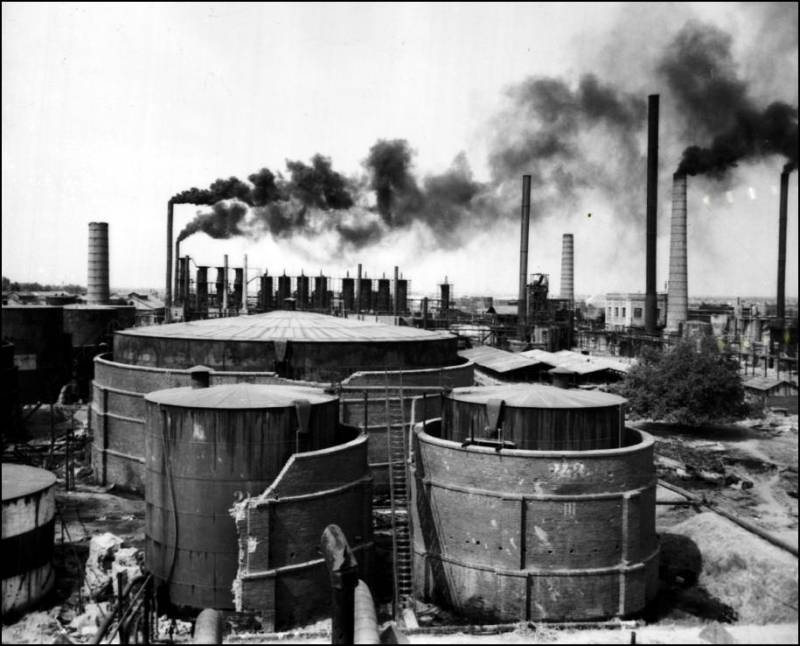 Refinery in Ploiesti. Photo of 1946, already rebuilt after the bombing of the plant. The brick lining of the tanks is clearly visible to protect them from bomb fragments. The container lining on the left was destroyed, obviously, by a close explosion of an aerial bomb, and was not restored as unnecessary.

Romanian oil belongs to those military-economic moments stories World War II, about which almost all researchers mention something, but almost no one mentions in the necessary details. Behind the translucent hints of deep awareness, ignorance of the most elementary nuances often lurks, such as the fact that Romania almost did not export crude oil, but traded almost exclusively in oil products.

Yes, in his secret note on the Romanian raw material economy "Rumänien Rohstoffwirtschaft und ihre Bedeutung für das Deutsche Reich" an employee of the Imperial Directorate of Military-Economic Planning, Dr. Wilhelm Leisse, writes that in 1937 Romania produced 7,1 million tons of oil, of which export went 472 thousand tons (RGVA, f. 1458k, op. 14, d. 15, l. 37). Crude oil exports amounted to 6,6% of production, which is very little. And it is quite surprising in the framework of the prevailing perception of Romania as a country that did nothing but pump its oil for export.

To all possible opponents who want to pretend to be subtle connoisseurs of the issue, I will say right away that the overwhelming majority of works and publications that touch on the importance of Romania in the military-economic support of Germany speak of oil and almost nothing about oil products. From the voluminous essay of the Romanian historian Gheorghiu Buzatu "O istorie a petrolului românesc", which contains a table of the production and export of Romanian oil from 1939 to 1945 (very interesting in itself): in 1939, 6 tons of oil were produced, 249 were exported thousand tons, in 4 (already when Romania had other allies) 178 1945 thousand tons of oil were produced, 4 640 thousand tons were exported (Buzatu Gh. O istorie a petrolului românesc. Bucureşti, "Editura enciclopedică", 3, p. 172) ... And it is not stipulated that the export was in the form of petroleum products. Buzatu received the export figure by synthetic means, adding up the volume of petroleum products of different grades, and described it all in such a way that it gave the impression that it was about crude oil. Who, if not the Romanians, know how everything was in reality? But they lied! 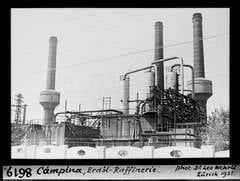 Oil refinery in Campina in 1935
Such historiographic incidents are very curious and, in my opinion, are of political origin. Thus, Romania somewhat masked its role in Hitler's military campaigns. Because releasing at the request of the Germans and shipping oil products directly to the Wehrmacht and the Kriegsmarine is one thing, but building out of oneself as an underdeveloped resource-based power selling crude oil under pressure is another.

German documents show, however, something quite different. Romania supplied the Germans with finished petroleum products in a fairly wide range of grades and even tried to cash in on them, however, without much success. 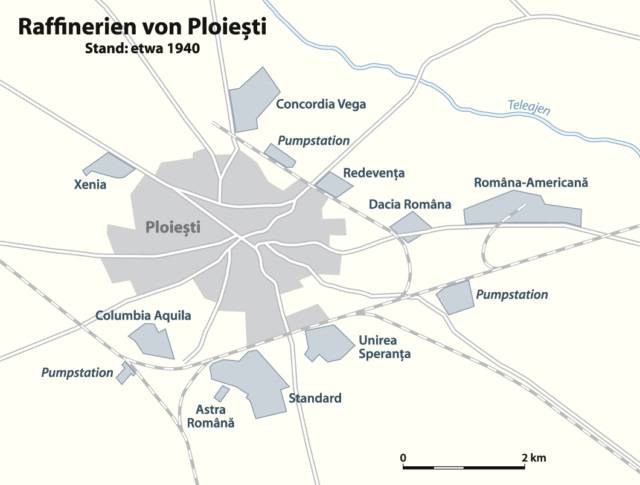 German scheme of the Ploiesti refineries as of 1940. Developed infrastructure: railways, oil pipelines, pumping stations. Romania had large processing and shipping capacities of oil products. Plant names - the names of various Romanian firms to which the factories belonged

A very interesting document is a certificate on the Romanian prices for oil products for May 1942. For example, the prices for the supply of fob to Giurgiu (that is, with loading on a tanker in the port of Giurgiu) per ton:

At the end of the table, the Germans put for comparison the prices of petroleum products in the United States, fob Galveston:

You can estimate how much Romanian oil products cost the Germans. In 1941, Romania supplied 1322,6 thousand tons of gasoline of all grades to Germany. At the price of delivery to Vienna along the Danube, this consignment of gasoline cost 182,1 million Reichsmarks. In general, 137,7 Reichsmarks per ton of gasoline is a lot. Synthetic gasoline was considered expensive, but the price of synthetic aviation gasoline in 1939 was 90 Reichsmarks per ton (RGVA, f. 1458k, op. 3, d. 55, l. 12). Romanian gasoline in Vienna, from where else it must be transported further and something to be spent on it, was one and a half times more expensive than synthetic. In general, the Romanians tried to take the maximum from the Germans.

However, the Germans were ready to pay such prices, especially since the trade was conducted under clearing agreements, within the framework of which it was possible to inflate prices for industrial products, weapons and ammunition supplied to Romania. In addition, the Germans were simply in no hurry to settle through clearing. The accumulation of debts began already in 1939, with the very first clearing agreement. In 1942 Germany owed Romania 623,8 million Reichsmarks. In 1944, debts amounted to 1126,4 million Reichsmarks, which would have been enough to buy more than 8 million tons of gasoline at 1942 prices. The offensive of the Red Army in August 1944, the defeat of the German group and the transition of Romania to the side of the anti-Hitler coalition, this debt was actually written off.

To make a more accurate estimate of how much the Germans underpaid for oil products to the Romanians, it is necessary to find more detailed and detailed data on trade and product prices, on the basis of which the corresponding calculations can be made. However, even according to a rough estimate, the Germans received a significant part of oil products virtually without payment, in debt.

What kind of oil products

What kind of oil products were supplied from Romania to Germany and the allies? The documents containing information about the delivery plans, of course, gave the corresponding names. In the comments under the previous article, there was a mini-discussion that tractor fuel is not gas oil. But here it is necessary to take into account the important circumstance that the range of grades of oil products of the 1930s and 1940s does not coincide in everything with the modern one. Mainly because oil refining itself has changed a lot, and now most of the products that were used during the war are now used as semi-finished products for processing. For example, the same gas oil is now used to produce gasoline. And in general, if the refiners of that time were told that we would fill cars with gasoline with an octane rating of 95, 98, or even 100, they would say that we were a little crazy.

In addition, there were many special types of petroleum products. For example, Schwerbenzin, Cernavoda-Benzin, Moosbierbaumbenzin. Cernavoda is a town on the Danube not far from Constanta, and Moosbirbaum is in lower Austria, also on the Danube. There were oil refineries in both cities. It is known about the Austrian plant that in the years 1942-1945 it processed medium-quality gasoline in aviation petrol. Many factories produced gasoline of a certain quality, which stood out from the general statistics.

The main composition of oil products received at Romanian refineries in January-September 1942 was determined as follows:

Straight to the troops

Of course, you can understand readers who like to read about all kinds of feats and sentimental patriotic stories, and not about oil with oil products. However, knowledge of the history of the war consists of the study of various special issues, at first glance, of little interest.

And it depends on how you look at it. If you know that Romania did not supply crude oil, which still needed to be transported and processed somewhere, but finished oil products shipped directly to the German army from oil refineries, then this seriously changes the matter. 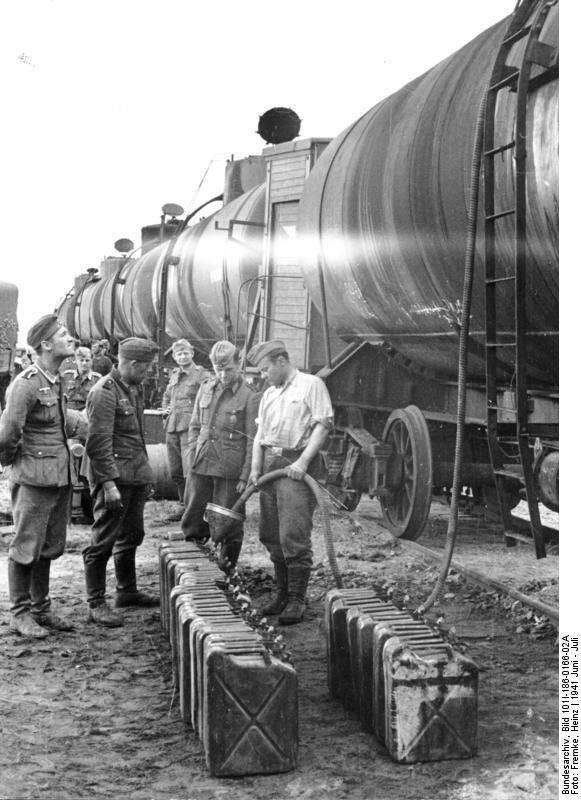 German soldiers pour gasoline from railway tank cars directly into the canisters supplied with tank and motorized parts. From factory to tank, from tank to canister, from canister to tank: fuel supply was greatly simplified and accelerated
Army Group South had a powerful oil supply base in the rear, which was an important factor in the offensive in 1941 and the fact that this particular army group advanced faster and farther than other army groups. If the fuel is supplied in the required quantity and without interruption, then why not attack?

So the role of Romania in setting the German army in motion was somewhat greater than is commonly believed.

Ctrl Enter
Noticed oshЫbku Highlight text and press. Ctrl + Enter
We are
Chernobyl notebook. Part of 3Father told
12 comments
Information
Dear reader, to leave comments on the publication, you must to register.