Nostalgia for the Wehrmacht and the Gestapo. The ultra-right infiltrates the power structures of Germany 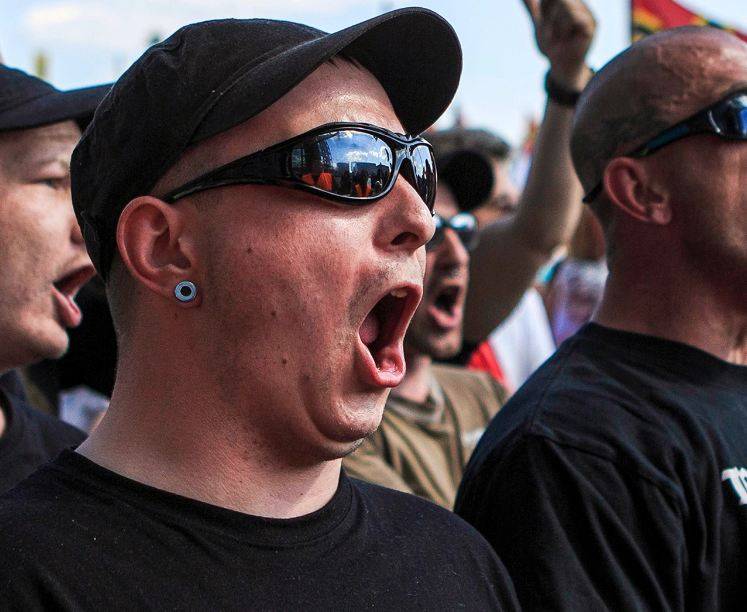 The guilt complex is over

German society took a long time and painfully to get rid of the Nazi legacy. You can talk a lot about the service in the Bundeswehr of high-ranking Wehrmacht officers, about thousands of Nazis who did not receive adequate punishment, but the Germans, up to a certain point, honestly bore the burden of responsibility for the atrocities in World War II. Not everyone agreed with the scale of German repentance, but there will always and everywhere be radicals demanding even greater retribution. Turning points in stories German pacifism began in the 90s, and there were several reasons for this. First, a critical mass of citizens grew, who did not remember the war and did not see the horrors of Nazism with the subsequent devastation. Young people did not have a causal relationship between the greeting "Heil Hitler!" and destroyed by Dresden and Hamburg. The second moment was a certain fatigue from constant moral pressure on the descendants of the builders of the Third Reich. As a result, the intensity of anti-fascism began to gradually decrease. It seemed that the Germans would return to normal liberal-democratic life. However, somewhere a switch clicked, and the ultra-right suddenly took the stage. And how did they come out! 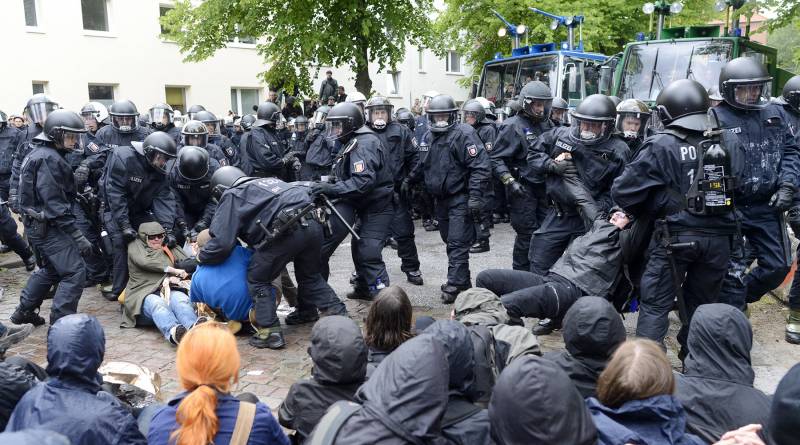 Source: cdni.rt.com
In 2017, the main opposition party in the Bundestag was the Alternative for Germany, a typical far-right party. Before that, there were years of relative calm among the ideological heirs of German nationalism. The first significant right-wing parties emerged in the FRG in the 1980s, but their success was either insignificant, like the Republicans party, founded in 1983 and received only twice insignificant results, or insignificant, like the German People's Union. received in 24 years no more than 1,2% in national elections. And now the "Alternative for Germany" is such a success. One of the triggers of German sympathy for right-wing ideas was, of course, the migrants who filled the country. The need for constant economic growth, cheap labor and low birth rates of ethnic Germans have led to the emergence of a large stratum of workers from the Third World. Around this background, events developed that led to the emergence of admirers of the SS and Gestapo traditions in the power structures of Germany. For the ultra-right German, there is now no other alternative to militarization than serving in the police or the army. Moreover, a radical in police uniform will finally be able to achieve his goal and punish unbelted migrants who do not want to honor the traditions of the enlightened West. For less radical right-wing activists, the alternative is military service as a real opportunity to defend their country. Over time, the number of such characters in the army and police reached a critical level, and the dishes began to spill out. In the middle of last September, 29 police officers (25 of whom worked in Essen) were suspended in North Rhine-Westphalia for Nazi trash in messengers and social networks. Swastikas, ridge, photos of Adolf and photographs of migrants against the background of gas chambers shocked first the authorities, and then the German media. All this hype turned out to be very useful for the adherents of Black Lives Matter, who demanded to fire not only neo-Nazis when weapons, but in general all the police. The Minister of the Interior Horst Seehofer, of course, did not heed the calls, but only indicated that there was no systemic ultra-right wing in the German police.

Consider what the Minister of the Interior considers isolated cases of neo-Nazism in his department. In 2017, the secret services uncovered the Nordkreuz cell ("Northern Cross") in the federal state of Mecklenburg-Vorpommern. This organized structure included more than 50 security officials of various stripes: police officers and regular military personnel. 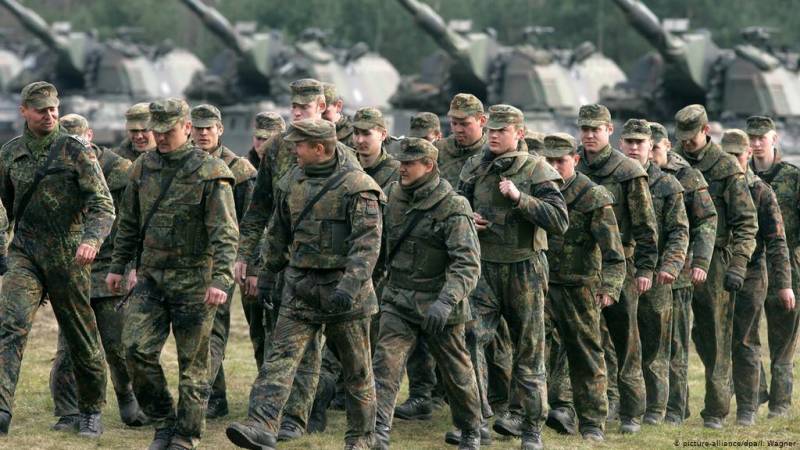 Source: dw.com
These guys did not just exchange inspiring pictures on WhatsApp, but prepared a series of murders of volunteers involved in helping refugees. They also blamed the radicals for an attempted coup d'etat and the establishment of a regime in which there would no longer be a place for foreigners. The targets were Foreign Minister Heiko Maas, former President Joachim Gauck and Bundestag Vice President Claudia Roth. The gang managed to steal weapons and ammunition from the warehouses of the local criminal police on a large scale, which was enough both for fire training and for preparing terrorist attacks. The leaders formed an impressive list of several thousand victims, which indicated the detailed addresses of each. The database, of course, was taken from the same criminal police department in Mecklenburg-Vorpommern. With the thoroughness typical of the Germans, the extremists bought 200 bags for corpses and several dozen bags of quicklime to dispose of their victims. This story turned out to be the loudest, but far from the last. By the fall of 2020, entire networks of ultra-right police officers had been identified in at least three out of sixteen German federal states. And a special study of the military counterintelligence identified 319 suspects of sympathies for Nazism in the police and another 58 similar characters in the security service.

The military is also in action

Defense Minister Annegret Kramp-Karrenbauer in the spring of 2020 had to disband an entire German special forces unit KSK (Kommando Spezialkräfte, special forces), which had stained itself with sympathies for Nazism. So the German military also had its own Nordkreuz. The ultra-right commandos dragged weapons, ammunition and explosives from the unit, apparently intending to continue the work of their “colleagues” from the Mecklenburg-Vorpommern criminal police. After the scandal, the auditors lost 62 kilograms of explosives and more than 40 thousand cartridges.

The cases of missing weapons from the FRG security officials raise many questions. Is the country such a mess that the army and the police cannot keep track of the safety of firearms and explosives? Or has the problem with extremism still become systemic among the siloviki and systematic theft "for a good cause" is encouraged at the very top? Be that as it may, weapons, also extremist literature, music and other attributes of the Third Reich ended up in the hands of the ultra-right.

It is also obvious that the vaunted German scrupulousness causes considerable disruptions at the stage of selecting candidates for military and police service. Arms in hand and the right to punish people who glorify Adolf in instant messengers and burn with hatred of refugees ... Secret operations in Afghanistan accelerated the processes of radicalization of special forces, during which extremists finally received an almost legal right to kill foreigners. The KSK cell was punctured on the banal: they threw a party about the release of one of the officers and turned it into a real orgy in the spirit of the SS. The invited priestess of love was so outraged by the overt Nazi rituals accompanying the binge that she went to the police and local newspapers the next day. One way or another, from 50 to 70 people out of a thousand employees of the KSK special unit were involved in the ultra-right underground. 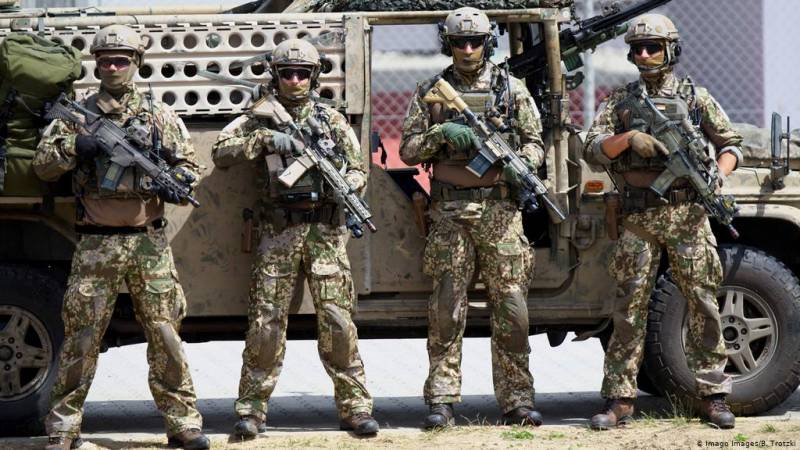 Source: dw.com
As usually happens in such cases, they started talking about the notorious tip of the iceberg, they say, the real scale of the brown infection is several times higher than the identified ones. A “witch hunt” is being initiated across the country, which will only increase the atmosphere of mistrust and fear, and this is an excellent ground for the growth of new extremist cells in the ranks of the security forces. When there is a reason to "be friends" against someone, it is always easier to find like-minded people. Only if earlier migrants acted as enemies, now government bodies will be added to them as carriers of a permanent threat. And any threat must eventually be eliminated. Or die yourself.

Ctrl Enter
Noticed oshЫbku Highlight text and press. Ctrl + Enter
We are
"The Russians have not gained anything from this war." World War II and modern GermanyWar against history. Militants "IG" destroy cultural monuments
100 comments
Information
Dear reader, to leave comments on the publication, you must to register.