UAV "Hunter" has a chance to become a long-range interceptor 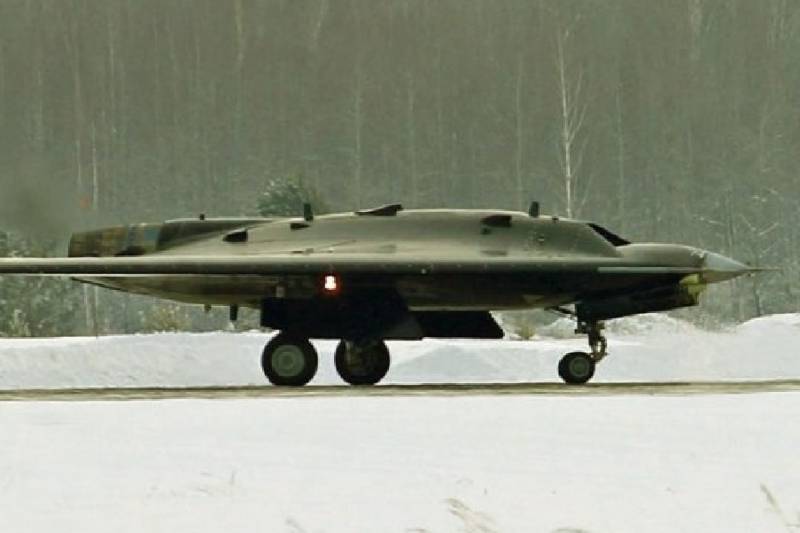 The Russian-made S-70 “Okhotnik” strike-reconnaissance UAV may become a long-range interceptor. At the same time, artificial intelligence will allow him to operate autonomously.


About this news agency TASS said a source in the aircraft industry who attended the Army 2020 International Military-Technical Forum. He said that the use of the S-70 as a long-range interceptor is an initiative of the Russian Defense Ministry.

A drone equipped with appropriate weapons will be located "at a distant approach", at a distance of several thousand kilometers, and destroy Aviation, missiles, drones and other means of attack of the enemy even before they find themselves in the zone of operation of Russian air defense systems. The Okhotnik will be controlled by satellites, ground stations and new fifth-generation Su-57 fighters. By the way, joint tests showed that the S-70 and the aircraft are capable of effectively interacting.


But this does not mean that the UAV will be deprived of the ability to act independently. On the contrary, the presence of artificial intelligence will allow it to independently find targets, report on them and destroy them.

Actually, there is nothing fantastic in the idea of ​​using a drone for long-range interception. I think its characteristics are quite suitable for solving the tasks assigned to it. Moreover, no one expects that the "Okhotnik" will leave the air defense and missile defense systems without work, it just will greatly facilitate their work, weakening the enemy's attack.

The flight range of the S-70, which is supposedly 3,5 thousand kilometers, makes it possible to use it in hundreds and even thousands of kilometers from the "launch pad". And the volume of the payload that this device is capable of carrying allows it to place on board both sufficient weapons and special radar equipment. In addition, it can stay in the air without landing for quite a long time, according to some sources, more than a day. And the ability to control it remotely has already been confirmed during tests.

Of course, this is only an assumption, but it is unlikely that a drone will require weapons and ammunition that are fundamentally different from those already in service with Russian aviation. Given its weight and dimensions, it can be assumed that the drone will be armed with the same bombs and missiles that the Russian Aerospace Forces are successfully using today.

Of course, the device also has weak points. In particular, many critics of this drone draw attention to the fact that it does not have sufficient stealth for radars, although stealth technology was used in its production. And its lack of maneuverability makes it vulnerable to enemy fighters.

It is clear that high-speed and maneuverable air combat against enemy fighter aircraft is not for the Hunter. But he is quite capable of staying in the air for a long time and reacting to the emerging danger.

Actually, the main advantage of the Russian heavy shock-reconnaissance drone is its modularity and multitasking. It can be equipped with different equipment and weapons, depending on the task assigned to it.

Ctrl Enter
Noticed oshЫbku Highlight text and press. Ctrl + Enter
We are
A great interview with Sergey Lavrov: about Ukraine, Obama and IranWhat you didn't want to know about England
Military Reviewin Yandex News
Military Reviewin Google News
99 comments
Information
Dear reader, to leave comments on the publication, you must to register.