Virologists in uniform. The Pentagon is looking for new levers of influence on Russia 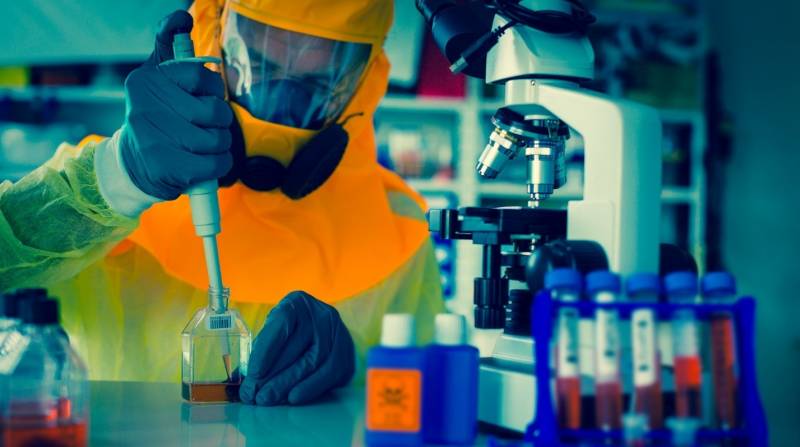 The fight against coronaviruses

At the center of the recent scandal was a completely harmless pointed-eared bat that lives in South Ossetia. Spy passions flared up around the bat, which is listed in the Red Data Book of the Republic. According to the version spread in the Internet space, the detained citizen of Georgia Khvicha Mgebrishvili was hunting for "cocoons of bats." The target was a further sale for $ 5 to the notorious Richard Lugar Public Health Research Center. For this, Mgebrishvili decided on July 3 of this year to cross the state border of South Ossetia.

There are two inconsistencies here. Firstly, the bat as a representative of the bats order gives birth to already formed cubs, and not cocoons, eggs, and the like. Perhaps the detainee had something else in mind: for example, the cocoons in which the mice are hibernating. However, the animals manage in the cold period without specific adaptations. Therefore, it is not clear what biological objects Mgebrishvili spoke about. And, secondly, what is so valuable in the mythical cocoons and in the sharp-eared myotis themselves, if American biologists are ready to give a fabulous $ 5 for them?

However, officials from the republic's State Security Committee say:

"Referring to the reasons for his transition to the territory of South Ossetia, Mgebrishvili explained that the main subject of his interest in South Ossetia were the colonies of bats located in the villages of Artseu and Grom, Tskhinvali region."
And they add that mice reproduce by live birth, and there are no cocoons in the life cycle of animals. 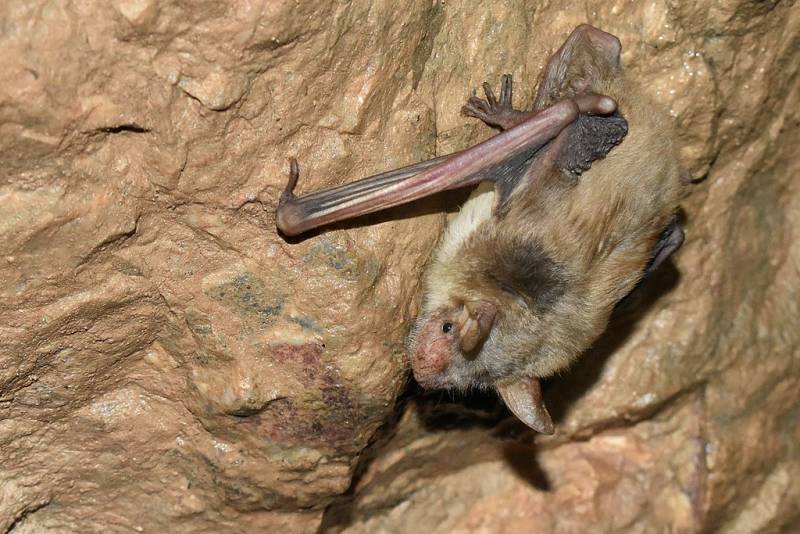 Pointed bat is one of the culprits of the scandal between South Ossetia and Georgia. Source: ru.wikipedia.org
Reaction of the South Ossetian Foreign Ministry:

"This is not an ordinary provocation, but a planned special operation for the extraction of biological material: live specimens of bats, whose habitat is the territory of South Ossetia, the area of ​​these villages."
According to the republic's special services, Georgia has been showing an unhealthy interest in bats since 2012. The collection of animals is carried out by the Lugar Center with the support of Eco Health Alliance, a non-profit organization funded by the US Department of Defense. The total cost of the project is nearly $ 3 million. The key goal is to research bats coronaviruses. As you can see, for American military biologists, the COVID problem was urgent eight years ago.

No matter how funny the confessions of the Georgian border violator about “bat cocoons” sound, the problem of the activity of biological laboratories in the territories of the former Soviet republics is becoming more and more urgent every year. The Georgian authorities defend the center of Lugar as best they can, accusing Russia of spreading disinformation. The rhetoric is simple: biological research is carried out, including on bats, but they do not pose any threat to the biosafety of neighbors. Amiran Gamkrelidze, the chief for disease control in Georgia, is even ready to invite Russian specialists to the Lugar center to get acquainted with the specifics of the work. Given the absence of even diplomatic relations between the countries, this is hard to believe. Naturally, Gamkelidze categorically rejects all questions about catching bats on the territory of South Ossetia, calling them lies and nonsense. At the same time, a more senior official and former Minister of State Security of Georgia claims the opposite. Five years ago, he said, the Lugar Center oversaw human trials of a drug to treat hepatitis C. An experimental drug called Sovaldi was developed at Gilead Sciences, owned by Donald Rumsfeld, known to us as the former US Secretary of Defense. Georgadze in 2018 said that at least 2015 Georgian citizens died from treatment in 30, and a year later another 13 people. Gamkrelidze, mentioned above, then retorted:

"No experiments on people and even, imagine, on animals, are not carried out in the laboratory."
But what about, excuse me, the latest statements about bats? And such inconsistencies are common in Georgian rhetoric.

The coronavirus pandemic should force many civilian institutions to take a fresh look at the Pentagon's biological laboratories. The first and so far the only ones protested in Ukraine. There are 15 laboratories in this state, in which biological research is supervised from the United States. Opposition deputies of the Verkhovna Rada on April 13 this year demanded an investigation into the activities of these facilities. In general, the very logic of locating research institutions at such a distance from the owner state makes one think. Since the very appearance of biolaboratories, doctors, military and biologists have tried to place them away from civilization. Remember the "Plague" fort in Kronstadt or the "Vector" laboratory in Koltsov near Novosibirsk, which was originally built in a sparsely populated area. Nobody builds biological objects with the most dangerous toxins and microorganisms in densely populated areas. Now there are no problems with the transportation of biological objects: it is much easier to transport an infected rodent to another continent than to build an entire laboratory for its study. But the Americans went further and did not just take their laboratories out of a densely populated area, but moved them to other states. This allows, firstly, to remotely conduct high-risk research without endangering its citizens. And projects of such a plan may not be directed directly against any state. But there is also a second aspect. Such a close location of many laboratories to the Russian border simply provokes the Americans to dangerous experiments. And the presence of unfriendly states such as Ukraine and Georgia only fuels this desire. Some may call it gibberish and alarmist. But imagine for a moment that Canada and Mexico suddenly lose loyalty to the United States and on the territory of these states the Russian Ministry of Health (not even the Ministry of Defense) will deploy a dense network of laboratories where they will not be looking for a cure for AIDS or oncology, but where they will bring a lot of the most dangerous viruses and toxins. And to all attacks of the State Department, the answers will be in the style: "Work is underway to ensure the consolidated and secure storage of pathogens and threatening toxins in the appropriate government institutions, so that peaceful research can be carried out and vaccines developed."

How will the United States react to such a deployment of peaceful laboratories? It was with this formulation that American diplomats responded to inquiries from Verkhovna Rada deputies regarding the appointment of 15 biological laboratories. The information about regular outbreaks of diseases in Ukraine near these laboratories is tactfully ignored in the US diplomatic mission. History cooperation between the Pentagon and Ukraine on the basis of biological weapons started in 2005 when a cooperation agreement was signed. The goal of the joint work was to prevent the spread of technology, pathogens and other nasty things that can be used to develop bioweapons. In accordance with the agreement, Ukraine became a remote repository of dangerous pathogens and, if necessary, immediately had to send the strains to the United States. Rada deputies suspect that experiments on humans, prohibited in the United States, are being secretly carried out at at least two facilities. By the way, Ukraine, due to legal delays, may allow such works. Proactive MPs, frightened by the coronavirus and much more dangerous virus storages in their country, have not received an adequate response either from the country's leadership or from American diplomats. And in 2009, in Ternopil, 450 people fell ill with hemorrhagic pneumonia, five years later, 300 fell ill with cholera, and in 2016 more than 380 people died from a virus very similar to the flu. And this list is not final. 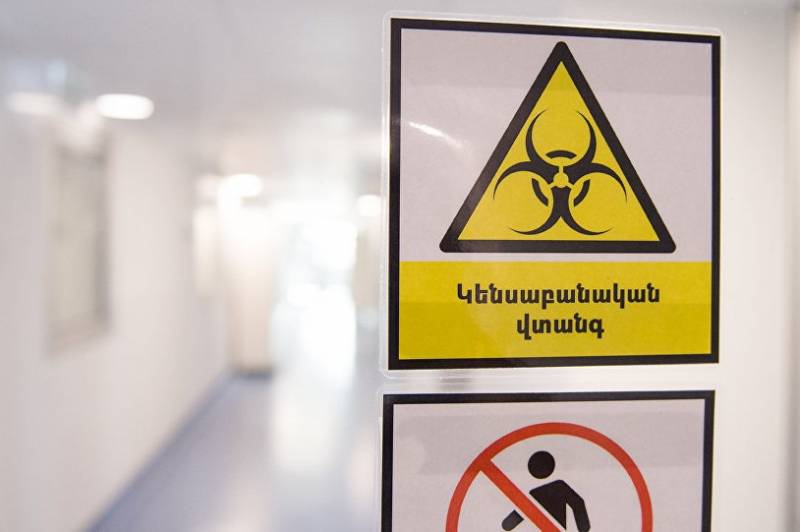 Source: ritmeurasia.org
The fight against American virologists in uniform in Russia is obviously being actively pursued. Naturally, there is no open information about this, but some indirect signs of this are visible. First of all, in order to counteract biological pathogens of various nature in Russia, there should be opportunities for the rapid and effective creation of vaccines. This is the main antidote for bioweapons. As we can see, our country was the first in the world to register the COVID-19 vaccine. It is likely that our military and civilian virologists have been on high alert over the past decades and, for this reason, have responded to the coronavirus threat in a timely manner.

One can regard such promptness as a political step of the state, but not a single sane doctor, virologist and pharmacist will recommend a known dangerous medicine to the series. Too big reputational losses will be the result. Suffice it to recall the story with "Thalidomide", which caused severe disorders in the development of embryos. The whole world remembers and will remember this for more than a decade as a mistake by pharmacists at the testing stage.

We can only hope that the belt of American biological laboratories keeps our military pharmaceuticals in a state of the necessary tone. And the Sputnik V vaccine is another confirmation of this.

Ctrl Enter
Noticed oshЫbku Highlight text and press. Ctrl + Enter
We are
Situational analysis of the death of the MH17 flight (Malaysian Boeing 777), made on the basis of engineering analysis from 15.08.2014Syria: Americans scare themselves, and Asma Asad buys chairs
45 comments
Information
Dear reader, to leave comments on the publication, you must to register.