Britain intervenes in US nuclear financing 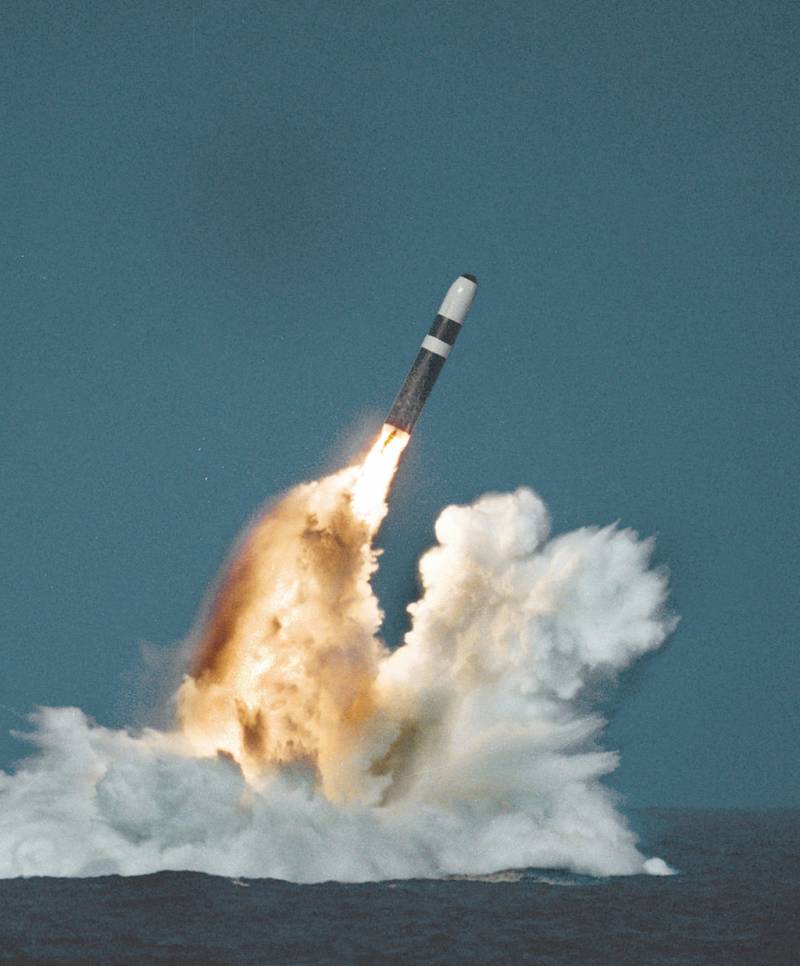 According to The Guardian, the UK is lobbying the US Congress for support for the advanced W93 thermonuclear warhead for the D5 Trident 2 submarine-launched ballistic missile (SLBM), claiming it is critical to NATO's "future as a nuclear alliance." In fact, the motivation of the British government is much more selfish: it is about the nuclear future of Britain itself.

Two words about what W93 is. Initially, the Americans, who are now unable to produce nuclear weapon in general, in the plans after the restoration (expected, but gradually shifting to the right along the time scale) of this chain of technologies and industries, it was to produce the so-called single series of interchangeable special warheads (SBS) and warheads (BB) - Interoperable Warheads IW1, IW2 and IW3 ... Interchangeable between SLBMs and ICBMs, of course, and not in general (a warhead for ICBMs on the CD will not work in any way, for example). Soon, as one not-so-decent anecdote said, "the concept changed." And this happened because, obviously, the development of interchangeable charges was not feasible.

First, instead of one of the IWs, the modernization of the W87 was announced, then the W88, and recently there was information about the "new", but at the same time "developed on the basis of one of the old projects" W93, intended for the D5 SLBM and its future replacement. All this was supposed to be produced at a rate of no more than 80 units per year from the beginning, and then already in the mid-30s. And it seems that not only the deadlines will not be fulfilled, but also the volumes: they are already openly talking about that. that it would be good to go half of this figure. In general, while all these talks about new charges are purely theoretical in nature, which does not prevent the battles in the military-political behind-the-scenes of America seething around this topic. And so, it turns out, and England too.

In a letter published by the Guardian newspaper, British Secretary of Defense Ben Wallace called on Congress to support the allocation of funds for the initial costs of developing the concept of W93 (that is, while it is not even a R&D stage, translating into our language). The letter was sent back in the spring, but the information was leaked only now. The Guardian believes it is engaging the UK in political debate in the United States by inciting the Trump administration against many Democrats and arms control groups over whether the W93 program is necessary at all.

The program will cost $ 14 billion, but in reality it will probably be much more, here, as usual, the "dog on the way" not only could, but must grow ... in price. The US Navy already has two types of BB to choose from for its Trident-2 SLBMs: the W88 and the W76-1. And then there is the W76-2 vivisected, where weight and size models were left from the thermonuclear part, and the charge gives out only 6,5 kt from its plutonium fuse, but these charges are nothing - no more than a few dozen.

The close cooperation on W93 casts doubt on the true independence of the UK nuclear deterrent - the British parliament first heard of this when US officials accidentally disclosed Britain's involvement in the topic this February.

Although it is not very clear what kind of independence of the United Kingdom's nuclear weapons can be discussed at all, given that the D5 SLBMs are leased from the United States, and not specific missiles, but any in the agreed amount. Moreover, they are served in the United States. But before, the British had their own charges, although they were often made on the basis of information received from the States.

The US-British Mutual Defense Treaty (1958) allows them to exchange technical information; transfer to each other the nuclear materials necessary for the production of warheads; Britain has access to US nuclear warheads projects, although the responsibility for building and maintaining them lies with the British Nuclear Weapons Authority. In 2004, the agreement was extended by 10 years, and in 2014 the agreement was renewed again by 10 years. When transmitting the text of the amendment to Congress, President Obama in his address to Congress indicated that "the amendment extends by 10 years (until December 31, 2024) the provisions of the 1958 Agreement, which allow the transfer of classified information related to nuclear weapons; nuclear technology and nuclear information subject to the control regime; materials and equipment necessary for the development of defense plans; personnel training; assessment of the combat effectiveness of a potential adversary; development of delivery systems; R&D work in the field of military nuclear reactors. " But the amendments themselves were not disclosed, although both countries assure that the text does not contradict their obligations under the NPT.

Develop charges for us, otherwise we can't!

The UK, through its minister, also supports the US administration's efforts to get started on W93 and its request for $ 53 million in the 2021 budget. And earlier it was planned to make a request on this issue later. Some are trying to push through a program that is quite controversial in its necessity (as they believe in the United States) before the elections, because the new administration, if there is one, will surely shut down this shop. Or it will revise the terms and volumes for the "worse". “These are difficult times, but it is imperative that we demonstrate transatlantic unity and solidarity during this difficult period,” Wallace wrote to members of the Congressional and Senate Armed Forces Committees.

Congressional funding for the W2021 program in 93 will further deepen the unique nuclear relationship between our two countries, enabling the United Kingdom to provide a safe and assured continuous deterrence at sea for decades to come.
British intervention comes when the initial funding for this work hangs in the balance. It was approved by the Committees of the Armed Forces of both chambers, but the subcommittee on energy and water supply (and his opinion on nuclear issues in Congress is one of the decisive ones) last month vetoed the topic.

The UK insists that its nuclear deterrence is autonomous, but both countries use the same missiles and coordinate their work on charges and weapons. The current British warhead for the D5, it is also the only one left by the former "mistress of the seas", Trident, Holbrook, is very similar to the W76 warhead, both in size and power - there are about 80-100 kt, the W76-1 also has 100 kt. And the "cut" from Holbrook is also similar in power to the W76-2 - 5 kt. And the Americans learned this stupid and dangerous idea from the British: to create an especially low-power AP for SLBMs to compensate for their weakness in tactical / non-strategic nuclear weapons and delivery vehicles. It is expected that the American and British versions of the W93 will also be very similar to each other and the block itself will be almost identical. The British themselves, it seems, are not able to develop a new charge, just as they are unable to develop their own fighter or tank, so they hope for the overseas "former colonies". And when they suddenly do not want to do their work for the Britons, they try to stimulate them.

At the same time, the staff on Capitol Hill are in some shock: they have told the Guardian that they cannot recall such direct intervention of Great Britain in the American debate on nuclear weapons. Well, yes, this is not the virtual interference of "Putin's hackers" in the elections, as a result of which Trump was elected to America. This is completely different, you have to understand! Well, imagine, say, Minsk, which would express its opinion on the financing of some nuclear missile program of the RF Armed Forces, or even Beijing? Can't you imagine that?

In his letter to congressional committees, Wallace wrote that "your support for the W93 program in this budget cycle is critical to the success of our warhead replacement program and to the long-term viability of the UK's nuclear deterrence and therefore NATO's future as a nuclear alliance." What has NATO got to do with it, it is absolutely unclear. The United States, for all its enormous problems, will not be left without nuclear weapons in the medium term, and, even if it’s late (it’s not worth expecting "early"), they will restore production to some extent. It does not seem that France will also lose the ability to develop and produce charges. So the NATO alliance will remain nuclear. Whether Britain will remain so is the question. And the defense minister of the host country (or stuck near the American shark) shamelessly tries to ride on someone else's hump into a nuclear paradise.

Is it necessary at all?

The very request for funding W93 in the United States raises a lot of doubts about the need. Because both types of warheads for the D5 have either been upgraded (W76) or will pass (W88) in the near future, and replacing them, in general, is not yet relevant.

“This is oversupply oversupply,” said Kingston Rafe, director of disarmament and threat reduction policy at the Arms Control Association. “We already have two warheads for SLBMs. The W76 just went through a major modernization and life extension program. it is called PSE, the Americans call it LEP. - Auth.) and is capable of serving in the early 2040s, and the W88 expects it. "

“The United States can continue to help the British without rushing to develop unnecessary new design, and even for at least $ 14 billion, which duplicates one of the existing warheads,” added Rafe.

Similar points of view are expressed by other experts in this field in the United States, many of whom also point to the danger of such behavior for the Treaty on the Non-Proliferation of Nuclear Weapons, that is, the NPT. Otherwise, these people fear, the Russians may begin to share sensitive information with their friends and allies.

Alexandra Bell, a former State Department official and now senior political director of the Center for Arms Control and Nonproliferation, said the US-UK special relationship showed more solidarity in promoting new weapons than in arms control. “The UK lags far behind when it comes to strongly supporting the extension of START III, but at the same time it feels comfortable telling members of Congress directly what they should do with our own modernization plans,” Bell said. "In my opinion, this is at least strange." In general, in the United States, even the notorious supporters of "special relations in the nuclear sphere" between these countries fell into the sediment of British arrogance.

According to the US Department of Defense, the W76-1 will remain (if not lie) viable until 2045, and the British warhead is expected to last until the late 2030s, so there is no urgent technical need for replacement. Not to mention whether the development itself will be successful. But the disbursement of funds on this program will definitely be successful, so someone is in a hurry. And then suddenly new brooms will come to power and money will be swept in heaps from other people's friends in corporations to their own!

Ctrl Enter
Noticed oshЫbku Highlight text and press. Ctrl + Enter
We are
Situational analysis of the death of the MH17 flight (Malaysian Boeing 777), made on the basis of engineering analysis from 15.08.2014Results of the week. “In our cooperative, the board is always agreed”
Military Reviewin Yandex News
Military Reviewin Google News
19 comments
Information
Dear reader, to leave comments on the publication, you must to register.