The submarine component of the Black Sea Fleet has put the anti-submarine aircraft of the US Navy on the ears near Cyprus. What's happening in the Eastern Mediterranean? 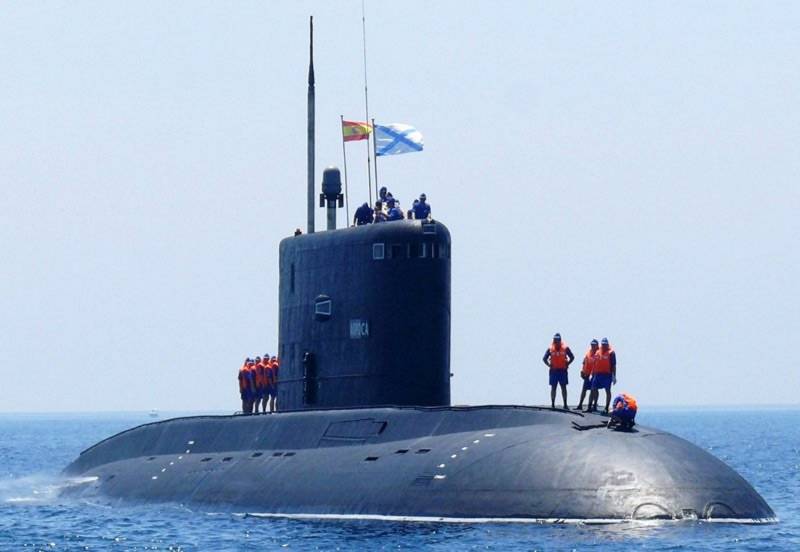 While the subject of close attention of numerous domestic military-analytical and news portals and Telegram channels over the past few days, details of the final stage of the naval phase of the multinational naval exercises of the United NATO Navy and the naval forces of the countries - henchmen of the North Atlantic Alliance "See Breeze 2020", as well as a completely ordinary final military air exercise with the use of the P-8A Poseidon anti-submarine aircraft (AvB Sigonella, Italy), the F-16C / D Block 40 multipurpose fighter unit (Aviano Aviano, Italy), a pair of KC-135R air tankers (Moron airbase, Spain) and an attack reconnaissance The UAV MQ-9A "Reaper" (12th Aviation Base of the Polish Air Force "Miroslavets"), a much more significant event for expert analysis, took place on August 3, 2020 in neutral airspace over the Eastern Mediterranean.

From optical-electronic reconnaissance to the search for "Varshavyanka". Operators "Poseidons" had to sweat

In particular, according to the online portal for monitoring regional and global air traffic "PlaneRadar", on August 3, about 100 km from the southern air borders of Cyprus, three long-range anti-submarine aircraft P-8A "Poseidon" with functioning transponders of the A3H-type were recorded simultaneously B, two of which followed the usual route to the northwestern air borders of the Syrian Arab Republic over the provinces of Tartus and Latakia to carry out strategic optical-electronic reconnaissance of the Khmeimim airbase and its environs for tactical activity aviation the operational aviation brigade of the Russian Aerospace Forces and the probable deployment of additional anti-aircraft missile systems designed to form a more powerful echeloned anti-missile "umbrella" over the air base. Meanwhile, it is well known that the US Navy command in Europe and Africa traditionally used only one long-range anti-submarine aircraft P-720A to carry out ordinary optical-electronic reconnaissance of the military infrastructure of the Avb Khmeimim and the 8th logistical support point of the Russian Navy in Tartus. Poseidon ”, equipped with an MX-20HD multispectral optoelectronic turret.

Possessing medium-wave infrared (3-5 mm), daytime television and low-level television viewing channels with an optical zoom of about 75X (and the possibility of additional digital zoom up to 200-250X), even one MX-20HD optoelectronic complex, subject to a high meteorological visibility range, is capable of provide the Poseidon operator with comprehensive information on any changes at the reconnaissance facility (from the fact of deploying additional air defense systems to determining modifications of tactical aircraft and identifying missile and bomb weapons on their hardpoints). A completely logical question arises: what made the headquarters of the US Navy in Europe and Africa send three Poseidons simultaneously into neutral airspace over the Eastern Mediterranean?

It is quite obvious that in this case we are talking about the performance of "Poseidons" not only optical-electronic reconnaissance, but also about the use of these machines directly for their intended purpose - the implementation of hydroacoustic reconnaissance, which consists in monitoring the underwater space for the presence of submarines of a potential enemy with an ultra-small acoustic signature. One of the six low-noise diesel-electric submarines of pr. 8 "Varshavyanka" of the 636.3th separate submarine brigade of the Chernomorsky could well become the subject of interest of the sonar operators of the three P-4A "Poseidon" fleet, which in the "sneaking" mode approached the RAF Akrotiri airbase (Cyprus) to assess the efficiency of the anti-submarine defense of the NATO Naval Forces. This is evidenced by the loitering route of one of the three Poseidons, reflected on the map of the resource "PlaneRadar"

It is logical to assume that it was very difficult to calculate the location of the submarine of this project even with the help of a certain number of advanced sonar buoys ANSSQ-125 MAC, AN / SSQ-62D / E DICASS and AN / SSQ-101B ADAR directional and non-directional action, equipped with highly sensitive hydrophones and capable function in active and passive modes.

To detect Varshavyanka in the active mode, the distance between the reconnaissance submarine and the sound-emitting source (dropped from an anti-submarine aircraft by an explosive package or a sound-emitting module integrated into the buoy's radio electronic equipment) must be minimal (and this is not taking into account the factor of complex bottom relief, which makes it possible to hide the submarine from the buoy radiation) ... As for the passive direction finding mode by means of the RSL, opening the location of the diesel-electric submarine pr. 636.3, which has an acoustic noise of about 30-35 dB in the "sneaking" mode, will be obtained at a distance of about 5-7 km (in the near zone of convergence / acoustic illumination). These figures may vary depending on both the natural hydrological situation and the intensity of shipping traffic in the area of ​​the Mediterranean Sea, which is replete with spurious acoustic noise from rotating propellers (including cavitation, etc.).

As you can see, the specifics of detecting even a single ultra-low-noise diesel-electric submarine of the Varshavyanka class by means of NATO OVMS anti-submarine aircraft requires detailed and permanent monitoring of each square kilometer of the target sea area using a significant number of hydroacoustic buoys, as well as magnetic anomaly sensors located on board more than one anti-submarine patrol aircraft P-8A.

Ctrl Enter
Noticed oshЫbku Highlight text and press. Ctrl + Enter
We are
Situational analysis of the death of the MH17 flight (Malaysian Boeing 777), made on the basis of engineering analysis from 15.08.2014Strangulation: the context, conduct and consequences of the American naval blockade of China
Military Reviewin Yandex News
Military Reviewin Google News
41 comment
Information
Dear reader, to leave comments on the publication, you must to register.