Tanks in the reeds. BT-5 at Fuentes de Ebro 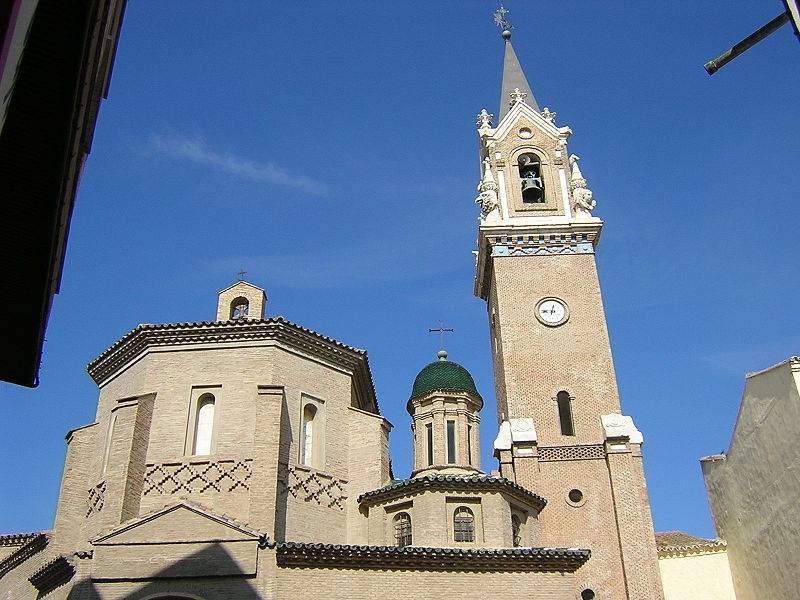 These are the first verses from the Spanish folk song Carmela (with an emphasis on the first syllable), sung by soldiers of the Republican Armed Forces who fought Franco's troops during the Spanish Civil War (1936-1939).

[right] “Be unquenchable to the enemy, do not call for reconciliation, you are the winner; God is with you, he will not leave your exploits without reward ”.

Behind the pages of the civil wars. People have never loved, and today they do not like to be deceived. Yes, but how to combine lies and truth in messages from the theater of war, when with all your might you need to raise patriotism and faith in your coming victory? To write that “everything is fine with us”, while our enemies “everything is bad”? So in the 30s of the twentieth century, when the civil war began in Spain, the Soviet press took just such a path. And according to the newspapers it turned out that the Republicans of the Franco nationalists all the time win, they surrender in large numbers, but then for some reason they themselves suffer one defeat after another and retreat. This aroused distrust of the press, people understood that something was not being told to them, but they really could not find out anything. However, time passed, much of the secret then today finally ceased to be such, and, of course, the secret of events near Fuentes de Ebro, where in 1937 the most impressive tank attack for the whole history wars in Spain. We also note that the history of the Spanish Civil War traditionally arouses great interest among the readers of the Military Review, so today we will again turn to this topic. 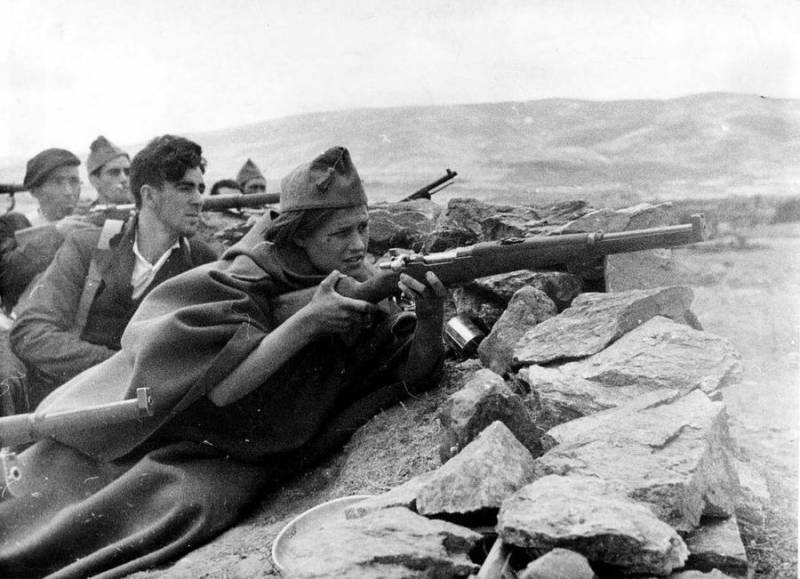 Soldiers of the people's militia in the trenches near Madrid

And it so happened that already in October 1936, the Soviet Union supplied the Spanish Republic with T-26 tanks, which played a decisive role in the defense of Madrid. Before that, the Republicans exclaimed: "Oh, if we had tanks!" Now they have tanks, they helped the Republicans to defend Madrid and immediately caused a flurry of complaints from them: the engine's power is not enough, the suspension is not very reliable, and most importantly, the speed is low. For the Spaniards, speed was generally something critical. They drove their cars in such a way that our military advisers were simply breathtaking, and during the battles in Barcelona taxi drivers accelerated their cars and ... rammed the barricades of nationalists at top speed. 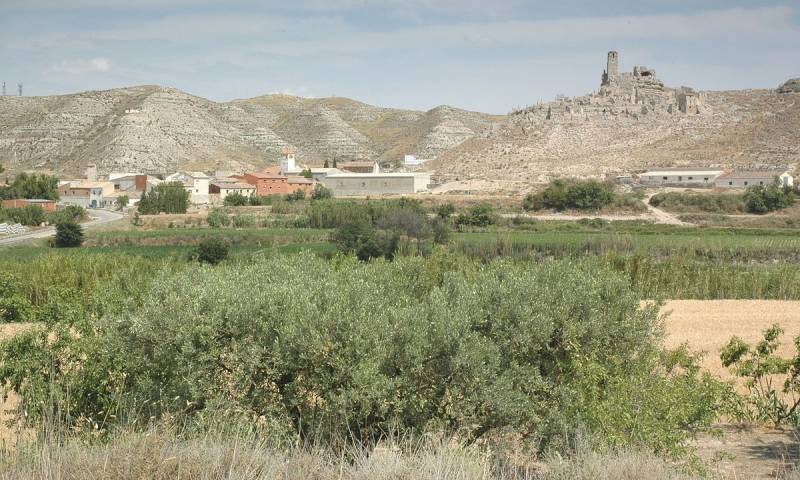 Area around Fuentes de Ebro: reed beds and irrigation canals. In the distance there are ruins - the height dominating over the city ...
Therefore, on February 5, 1937, at a meeting in the Kremlin, where Soviet military specialists who had just returned from Spain were invited, it was decided that it was necessary to supply the Republicans with now not T-26, but high-speed BT-5 tanks. However, only on July 24, 1937, the Spanish transport "Cabo San Augustin", on board of which 50 BT-5 tanks were loaded, was able to leave Sevastopol, but only six days later, on August 1, it was already in the port of Cartagena. Together with the tanks, a group of five Soviet military specialists, headed by A.A.Vetrov, also arrived on the ship. As for the future commander of this tank detachment, Colonel S. I. Kondratyev, he and the bulk of the tankers sailed to Spain from Leningrad. 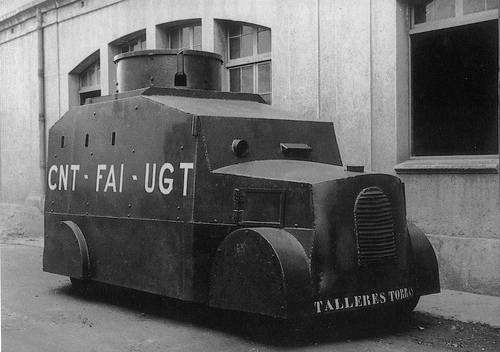 Armored vehicles of the Spanish trade unions
Immediately upon arrival, Vetrov and his comrades had to work hard: they had to drive all the BT-5 tanks from Cartagena to Archena, to the Republican tank forces training center, where the main group of Soviet tankmen arrived later. It was decided to create the 1st separate international tank regiment - "the regiment of heavy tanks", as the Spaniards called it. Both the Spaniards and foreign volunteers were to become members of the tank crews. But the commanders of the vehicles, as well as their driver-mechanics, were mainly Soviet officers, as they were more experienced. 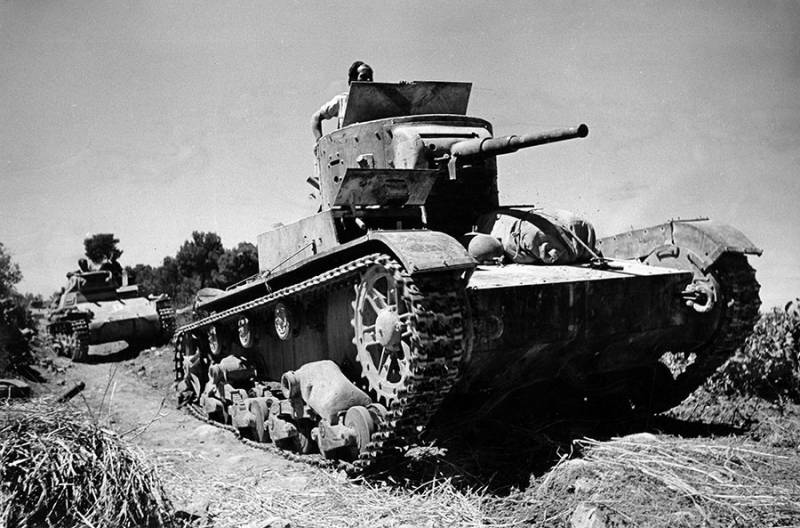 Hero of the Defense of Madrid - Soviet T-26
However, the tankers, alas, did not have to spend enough time on training. Already at the end of September, the regiment received an order to relocate to Catalonia on the Aragon front. For two and a half days, the tanks made a 630-kilometer march (both on wheels and tracks), and already at dawn on October 13, 1937, they were 10 km southeast of the small town of Fuentes de Ebro, which lay in the lower reaches the Ebro river.

The forces of the parties

The reasons for this rush were not so much military as political. Military setbacks undermined popular confidence in the Republican government, so it was important to achieve at least some success on one of the fronts. Since it was obvious that the incoming from the USSR: the T-26 and BT-5 cannon tanks had a clear superiority over the machine-gun tanks of the Germans and Italians, the decision to strike at the nationalists with the forces of tanks was just as obvious. It was decided to start a massive offensive on the Aragonese front - to recapture the small town of Fuentes de Ebro, through which a strategically very important road to Zaragoza passed (only 50 km were left from it to it). The offensive was to be commanded by General Karel Sverchevsky, a Pole by nationality who operated in Spain under the pseudonym General Walter. He was assigned the 15th International Brigade, which included four infantry battalions of 600 people each, and one battery of anti-tank guns, commanded by Croat Vladimir Kopik, who fought in the ranks of the Austro-Hungarian army back in the First World War. The most “fired” in the brigade were the fighters of the British volunteer battalion, which included three infantry companies armed with Mosin rifles, as well as a machine-gun company with Degtyarev light machine guns and “Maxims”. However, half of its population was Spanish. The American Lincoln-Washington Battalion was the second largest in size and combat experience. His fighters were called Lincolns. McPaps (short for MacKenzie - Papineau, two leaders of the uprising in Canada against British rule in 1837) nicknamed the volunteers from the Canadian battalion. 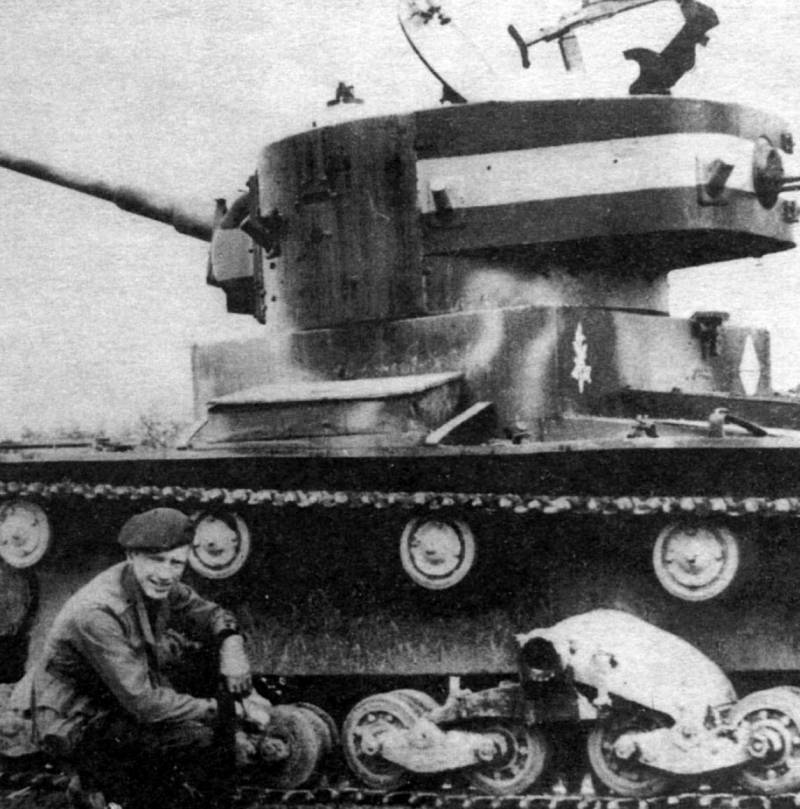 T-26, captured by nationalists, already with their identification marks applied to it
When on August 10, 1937, fifty BT-5 tanks arrived at the front, a "regiment of heavy tanks" was created from them, which included a company of armored cars and a company of anti-tank guns. BT-5. The regiment was to be commanded by Lieutenant Colonel S. Kondratyev. Most of his officers and tank crews were Russians, or more correctly, Soviet, and his deputy was a Bulgarian. The regiment had three companies, each with three sections, and each section with five tanks. The command tanks had radio stations and handrail antennas visible on the towers, as well as white square or rectangular signs painted on the towers, but for the most part the tankers identified each other's tanks by the numbers on the towers. 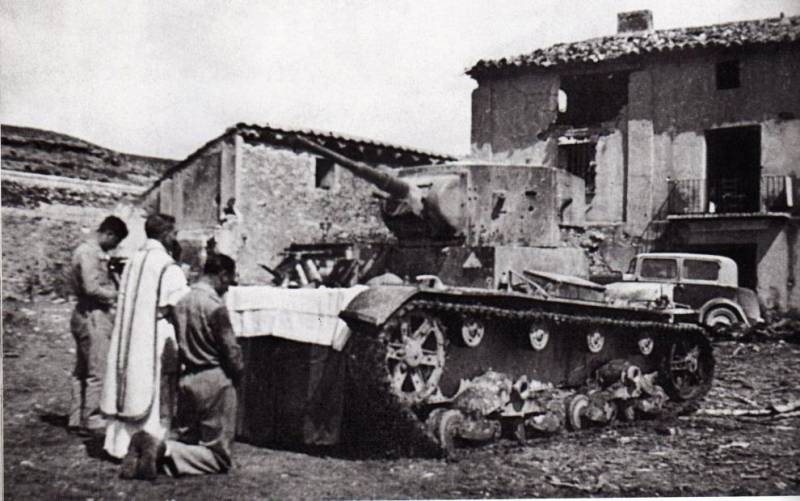 T-26, turned by nationalists into an altar for mass!
As for the nationalists, in the Aragonese direction, the Republican forces were opposed by the 5th corps, whose forces were located in the cities of Belchite and Fuentes, around which all-round defense lines were created. The Fuentes de Ebro garrison was part of the 52nd Division and consisted of three companies from the 17th Infantry Regiment, the Spanish Phalanx militia company (which had poor combat experience and therefore was in the second echelon of defense) and an artillery battery of light cannons 10 th artillery regiment. However, before the Republican offensive, the city's garrison was strengthened. Three army divisions, the Italian-Spanish Blue Arrows brigade were sent here, as well as three "camps" of Moroccan troops, including their cavalry, one battalion of the Foreign Legion and four artillery batteries armed with guns of caliber 65, 75, 105 and 155 mm ... Such efficiency, most likely, suggests that the plans of the republican command were known to the nationalists, that is, the "fifth column" at the headquarters of the Aragonese front acted very quickly! Thus, the Republicans who were preparing to attack did not have an advantage over the enemy in manpower, as well as in artillery. Their only trump card, which the nationalists had nothing to oppose, were 50 Soviet BT-5 tanks. With this strength, the Republicans, in principle, with their correct use, had a certain chance of success. 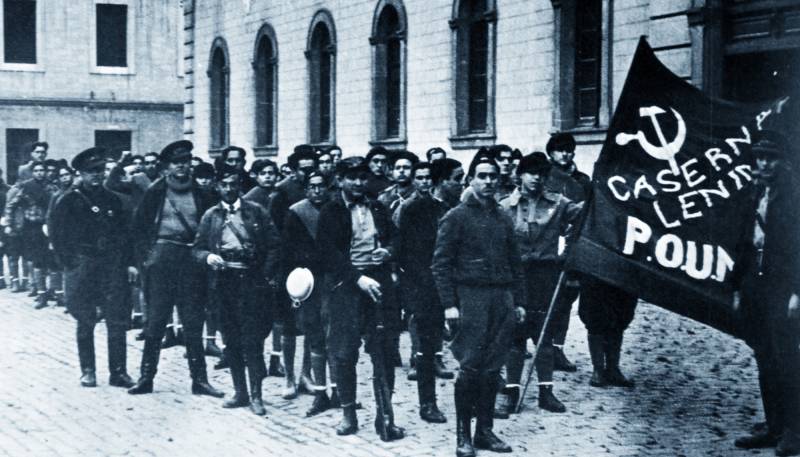 The POUM fighters had a particularly hard time: they were beaten by both nationalists and ... their own!

However, the plan for the future operation was developed in a hurry, so that many factors that could affect its success were not taken into account. So, initially it was planned to surround the city with flank attacks with the forces of tank groups, that is, to take it in pincers. But aviation nationalists destroyed a transport convoy with a supply of fuel and ammunition, and the element of surprise was clearly lost. Instead of this plan, which apparently became known to the enemy, they decided to storm the city with a frontal attack of tanks and infantry, relying on the support of artillery and aviation. 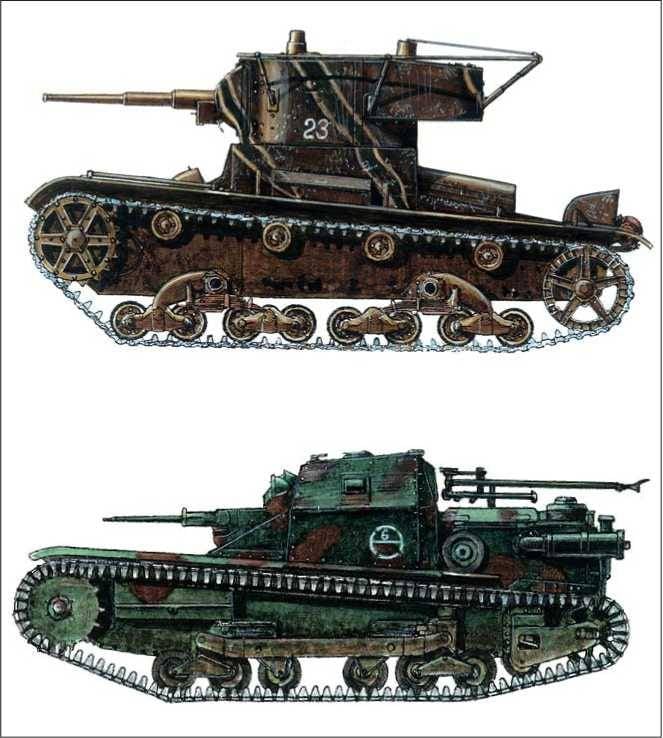 Participants of those tragic events: the T-26 tank and the Italian Ansaldo tankette. Fig. A. Shepsa
They thought of putting a landing party on the tanks, which, in theory, was supposed to strike the Francoists from the rear after the tanks broke through the fortified strip. However, nowhere was this idea previously tried in practice, the effectiveness of such actions was not tested, and, most importantly, the interaction of tankers with infantrymen was never worked out until the very beginning of the offensive. That is, everything was done on Spanish soil, but maybe in Russian: maybe we will break through! 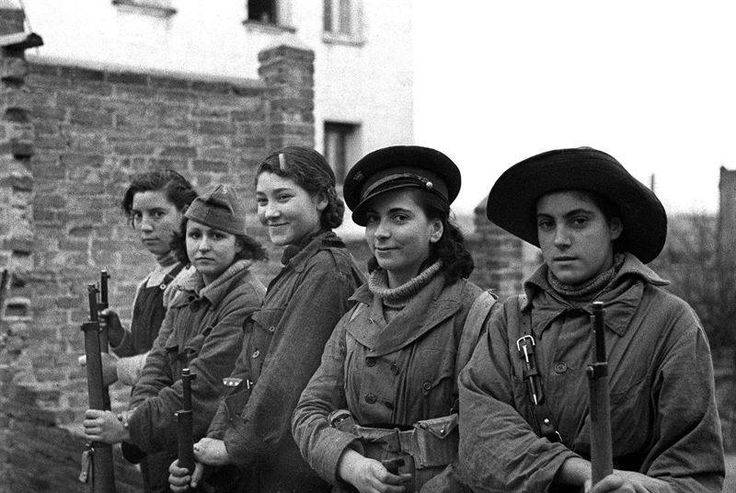 There were many women in the ranks of the republican army and militia ...
It should be said that the participants in the upcoming attack were exhausted by the previous fierce battles for Belchite. The factor that the brigade was international, and the moral and political situation in it was very contradictory, also played a negative role, which most negatively reflected the brigade's readiness to participate in the offensive. There were disagreements among the officers of the Republican headquarters, but, despite all these circumstances, it was decided to attack. 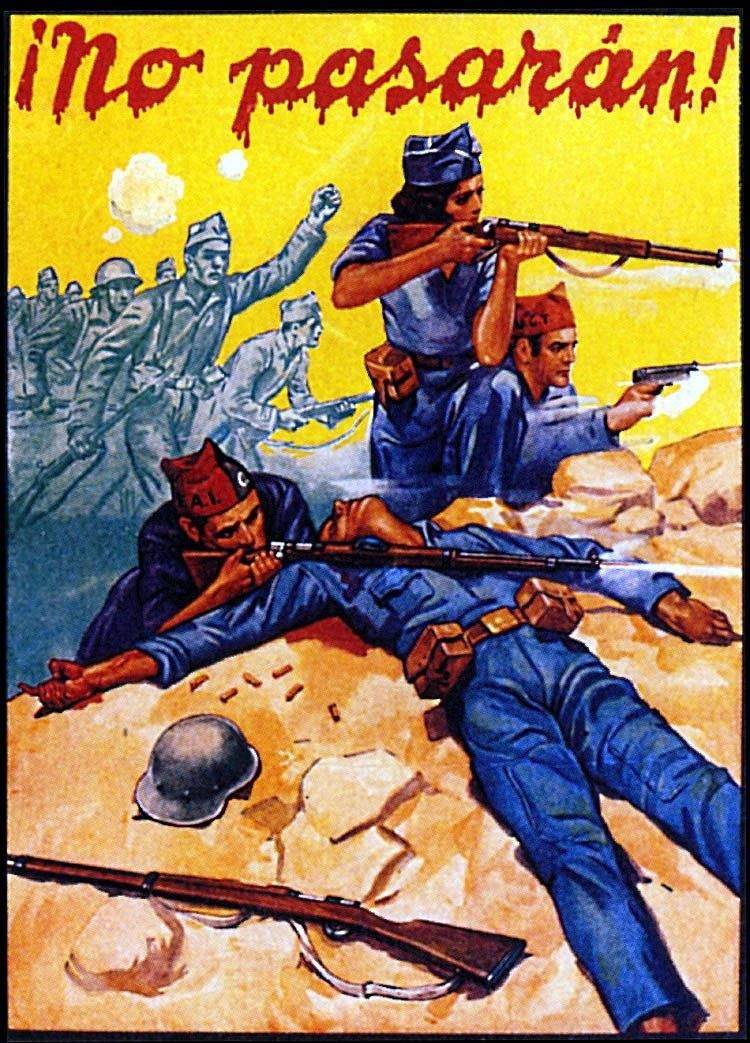 Expressive republican poster
To be continued ...