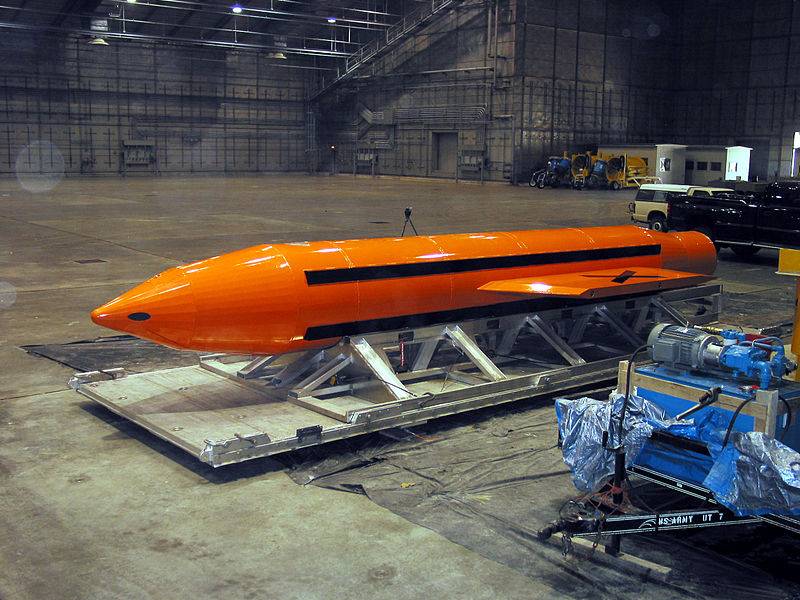 One of the most powerful aviation non-nuclear bombs today are GBU-43 / B MOAB (Massive Ordnance Air Blast). The bomb is operated exclusively by the United States of America, and has been repeatedly used in hostilities.


One of the main purposes of the GBU-43 / B MOAB bombs is to undermine underground tunnels, including those hidden in the depths of mountain ranges.

The high power of this aircraft ammunition is provided by an impressive mass of explosives. In this case, such a substance is H-6, which has a power exceeding that of TNT by more than a third. The explosion power of one such bomb is estimated at about 11,45 tons in TNT equivalent.

Among the combat applications of the GBU-43 / B MOAB, which in the United States is often called the mother of all aerial bombs, is Afghanistan. In particular, the US Air Force used these bombs to destroy a network of tunnels used by terrorists of the so-called "Islamic State" (a terrorist group banned in Russia). During the 2017 operation in the United States, there was talk of the collapse of tunnels and the death of at least 90 militants.

The reset can be carried out on a special platform, from which the GBU-43 / B is disconnected during the initial phase of the flight. The platform descends on a special parachute, and the aerial bomb goes into free fall.


The footage below shows the impact of the blast when using the GBU-43 / B aerial bomb. The shooting was carried out from a distance of at least 1,5 km. The blast wave knocks down the direction of the video camera mounted on the armored vehicle. And that's it ...

Shock wave from the American "mother of all bombs" GBU-43 / B MOAB pic.twitter.com/IiHb59o8fM

Ctrl Enter
Noticed oshЫbku Highlight text and press. Ctrl + Enter
We are
Air bomb of a volume explosion is the main non-nuclear argument of the Tu-160Domestic depth charges
34 comments
Information
Dear reader, to leave comments on the publication, you must to register.