German exhibition dedicated to the 75th anniversary of the Potsdam conference. Why is Russia not participating? 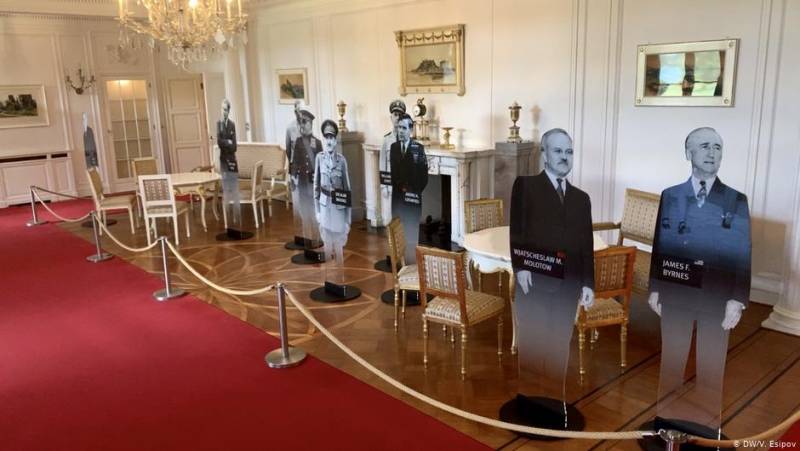 Cecilienhof received Stalin, Churchill and Truman in 1945. Since June 23, the thematic exhibition "The 1945 Potsdam Conference: A New World Order" has been working there. In total, in Potsdam, the organizers managed to collect 133 items representing historical value, from a dozen countries. Initially, artifacts from the Russian Victory Museum, the Historical Museum and the Central Museum of the Armed Forces were to appear among the exhibits. According to the aide to the President of the Russian Federation Vladimir Medinsky, it was planned to send Stalin's personal belongings, the uniform of the conference participants, technical equipment, documents and household items to Potsdam. We even signed a corresponding agreement. But when Russian historians prudently familiarized themselves with the contents of the signatures to the exhibits and the commentaries of the audio guides, the entire exhibition was recalled back to Moscow. As has often happened recently, the collective West and Russia view historical events and figures 75 years ago differently. The German side simply refused to use the signatures and comments offered by Russian museum workers in the exhibition. What are the contradictions? 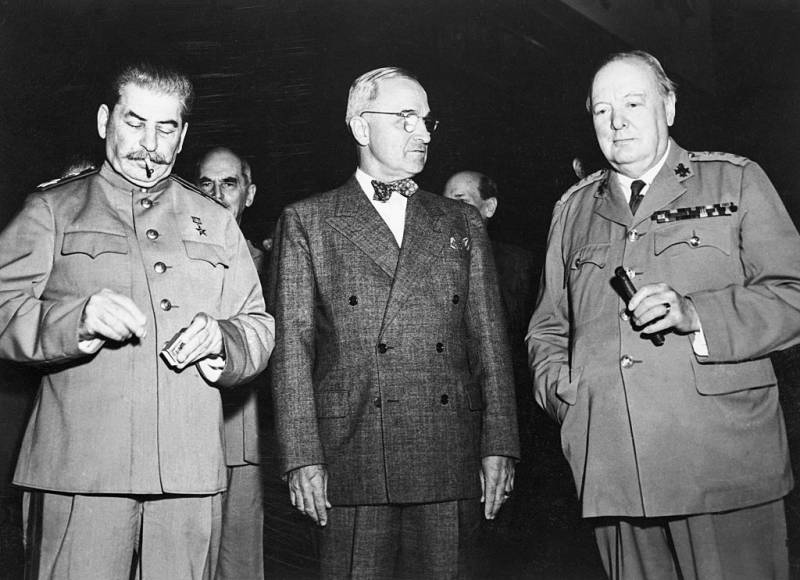 In this photo, Winston Churchill is still in Potsdam. Source: albercul.livejournal.com
First of all, in assessing the personality of Joseph Stalin. German researchers quite unequivocally equate his rule with tyranny, in fact, putting him on a par with Hitler. According to the curator of the exhibition, Jurgen Lu, historians are free to interpret certain events, and no one can point them out. In keeping with this "free" Western ideology, two equally abhorrent totalitarian powers clashed in World War II. One of them was successfully crushed in 1945, and the second was pressed in every possible way until the beginning of the 90s.

The organizers of the exhibition were also not satisfied with the comments of the Russian side regarding the reasons for the end of the war with Japan. The Germans insist that the victory was achieved exclusively at the expense of weapons mass destruction (the atomic bombings of Hiroshima and Nagasaki), and Russia - that thanks to the land operation of the Red Army. Jurgen Lu says:

"The Russian point of view has a right to exist, but it does not quite correspond to reality."
In keeping with old European slogans, historians from Potsdam explicitly reject the decisive importance of the Soviet Union in the victory over Nazism. Choosing an expression carefully, they talk about the great importance of the Red Army in the war. In ten years, I think, we will talk about a great or significant value, and after some time - about a considerable contribution. As a result, the Germans will tell with a blue eye about the decisive and unconditional contribution of the Americans to the victory. And there is no nagging about the wording or verbal phrases. In such a delicate and sensitive sphere of historical memory, any semitones in the description are unacceptable - behind them are millions of human lives. 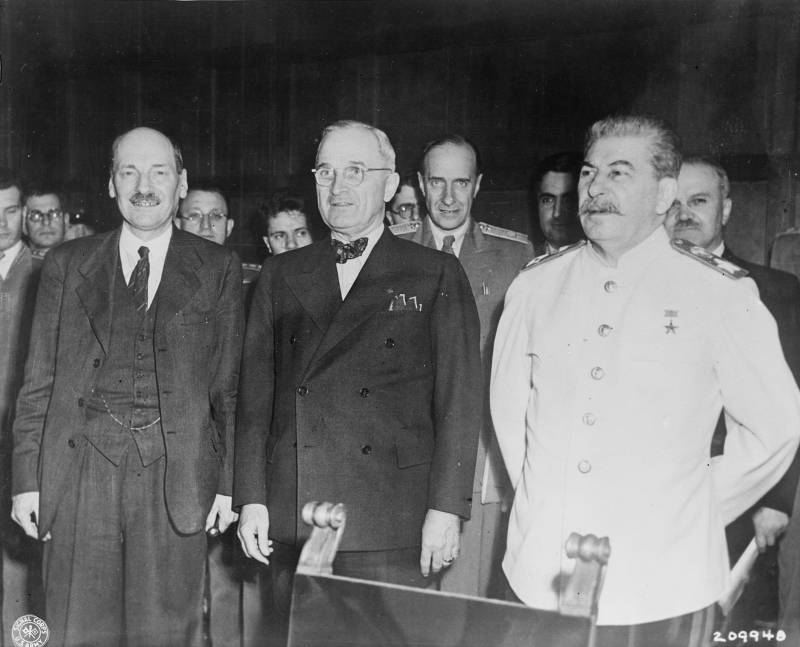 Great Britain was represented by the new Prime Minister Clement Attlee on July 26, 1945 in Potsdam. Source: waralbum.ru
Even during an interview with Deutsche Welle, Jurgen Lu contradicts himself. First, he speaks of a divergence with his Russian colleagues in assessing the role of Stalin (the Germans called him a dictator and a tyrant), and later on "absolutely neutral and correct formulations." For example, you can hear this about Stalin in the audio guide:

"Stalin was the only ruler and secured his power with the support of the secret police."
The Ministry of Culture has protested against the definition of "secret police", but apparently the Germans are better versed in this area. At the same time, the organizers of the exhibition, of course, are upset by the lack of valuable exhibits from Russia. In particular, Stalin's tunic will not be in the Cecilienhof. There will be no part of Truman's personal belongings. This, however, is not an American protest: the United States is satisfied with everything in the new interpretation of the events of 75 years ago. There was simply no money to transport the American leader's straw hat across the ocean.

Visitors to the exhibitions will come out in full confidence that what they saw is the collective opinion of the victor countries of Nazi Germany. After all, it was here that 75 years ago the three leaders agreed on a post-war world order. And now Europe is emerging from the coronavirus epidemic, people are afraid of mass gatherings, and this raises questions about the payback of the exhibition, which has already been postponed for a month and a half. Maybe the excitement around the Russian protest will help the Germans attract new visitors?

The exposition in Potsdam, in the opinion of Russian historians, is a tracing of the system of views on the outcome of the war established in Europe. The Soviet Union is traditionally blamed for the Molotov-Ribbentrop Pact, naturally renamed the Stalin-Hitler Pact. They do not forget about the myths about the mass rapes of German women by the Red Army. The Holocaust is actually brought out by the organizers as the only crime of the Hitler regime, and the genocide of the peoples of the USSR is kept silent.

As a result, it is difficult to disagree with the words of Vladimir Medinsky regarding the forced Russian boycott:

West against Yalta and Potsdam

The results of the Yalta and Potsdam conferences haunt the enlightened West for a long time. Several American remarks on this matter. Henry Kissinger:

"Yalta has become a symbol of shame in terms of shaping the image of the post-war world."

"No more Munichs and no more Yalts."
In 2005, in Riga, he called the results of these conferences "treacherous".

At the same time, everyone forgets that the main result of the Potsdam Conference was long-term peace in Europe and the creation of the United Nations with the Security Council. The role of the Soviet Union in this matter was one of the decisive ones. How long did peace last after the Treaty of Versailles of 1919? 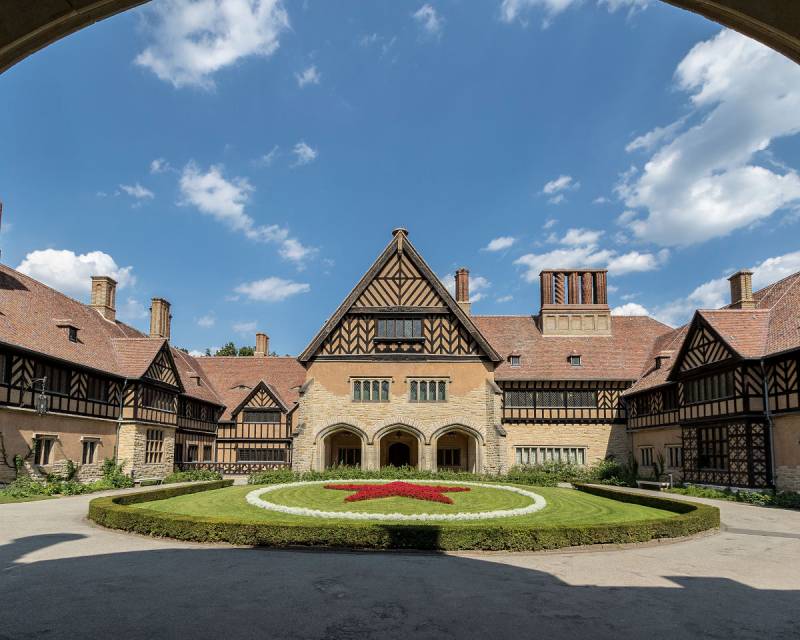 Cecilienhof Palace after restoration. Source: spsg.de
It must be said that such rhetoric appeared in Europe and the United States only in the late 80s. First, the generation of those who remembered the merits of the Soviet Union in the fight against Nazism gradually passed away. They would surely shut the mouths of modern free historians, whose opinion does not depend on any government in the world. And secondly, the socialist system collapsed, the USSR became weaker, which means that it became easier and simpler to form a “special view” of the results of the war. With the collapse of the Soviet Union, a new, "NATO-centric" security system emerged, which neither Yalta nor Potsdam categorically suited. At the same time, the selective justice of the Europeans is evident. On the one hand, Poland unexpectedly demands reparations from Russia for its many years of occupation. Let us remind you that this very "occupation" was approved following the results of Yalta and Potsdam in 1945. On the other hand, the Poles do not even hint at the return of vast territories to Germany, which were transferred to the country by the decision of the same conferences. By the way, at the anniversary exhibition in Potsdam there is not a word about how the Poles enthusiastically expelled the Germans from the "returned lands". This is exclusively blamed on Moscow! As well as in the cruelties that the Czechs allowed themselves against the Sudeten Germans. 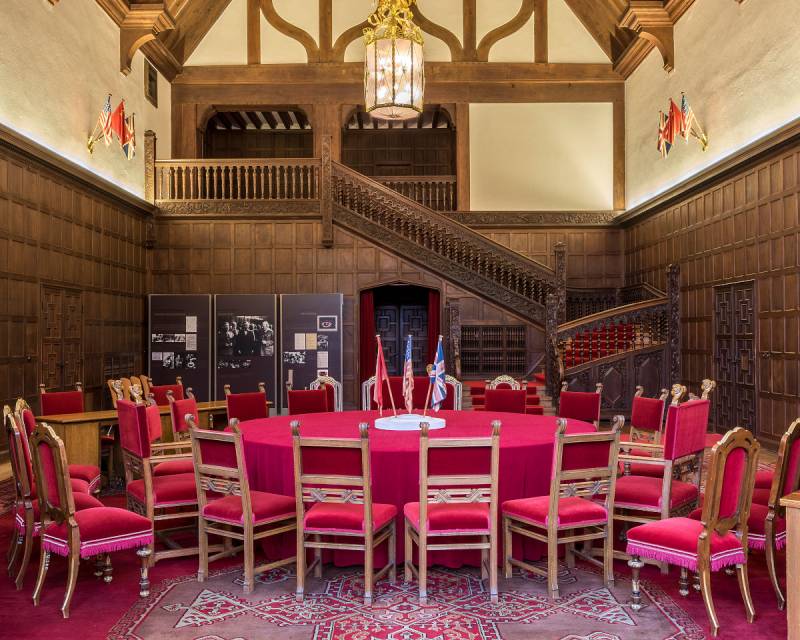 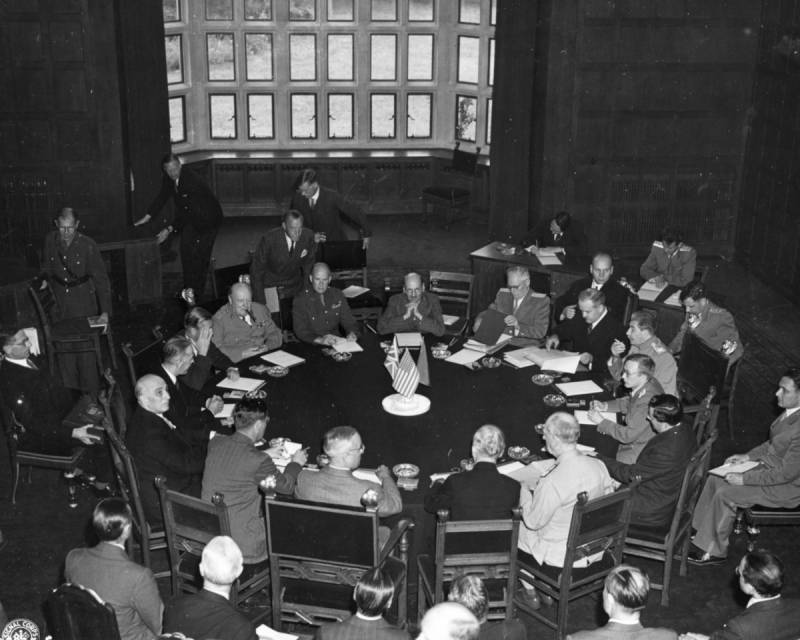 Cecilienhof Hall in 2020 and 1945. Source: spsg.de
Against this background, the Russian leadership took, perhaps, the only right step: on July 17, an alternative exhibition dedicated to Potsdam 1945 opens at the Victory Museum on Poklonnaya Gora. The funds of the museum exhibit about 40 historical artifacts that are directly related to the events of 75 years ago. Alexey Shkolnik, director of the museum, notes in this regard:

“The exhibition about the Potsdam Conference, I think, is very relevant for today, it surprisingly resonates with many topical problems of the modern world. First of all, it reminds everyone who does not abandon attempts to reconsider the results of World War II that the victorious countries here adopted final, non-contested decisions on punishing those responsible for unleashing the war and banned Nazism in all its forms and manifestations. In addition, it gives all of us a convincing example of how it is possible, being ideological and geopolitical opponents, to jointly solve world problems in the interests of their countries and the whole world. "
The Moscow exposition will stay in the museum until August 10, but it will be possible to get acquainted with the Potsdam anniversary exhibition for a long time, until the end of 2020.