The range of the Smerch MLRS can reach 270 km. Trying to "replay" the GLSDB project 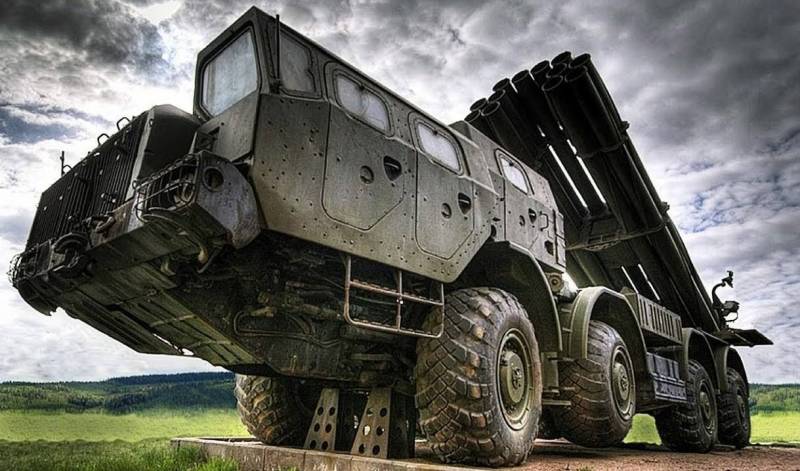 In one of previous reviews we analyzed in detail the flight performance parameters of promising modifications of 300-mm guided missiles of the 9M528 / 9M542 line for updating the ammunition of the Smerch / Tornado-S multiple launch rocket systems, as well as the features of the operating modes of the ProNav inertial navigation units, allowing the above missiles implement a complex quasi-ballistic flight trajectory with a final sheer dive at its terminal section, which ensures confident defeat of modern enemy air defense systems at a distance of 150 km by "breaking through" into "dead craters" above the radar illumination and guidance of anti-aircraft missile systems. We also came to the conclusion that in the probable "counter-battery duels" with the rocket artillery of the NATO Joint Armed Forces, these missiles can easily outperform the American 227-mm guided missiles of the M31A1GMLRS type, the range of which barely reaches 90 km.

Prospective developments of NPO Splav and KTRV, designed to preserve the dominance of rocket artillery MFA of Russia in theaters of military operations of the XXI century

Meanwhile, it would be extremely naive to assume that the above alignment will be objective for at least 5-10 years to come, because the military-industrial complex of a potential adversary, as you know, is not at the stage of "slipping" and is quite capable of darkening the optimistic vision of the situation of our expert communities by the program of deep modernization of high-precision MLRS of the MLRS / HIMARS family.

In particular, in the first case, we are talking about a joint American-Swedish program for the development of a promising 227-mm two-stage long-range guided missile GLSDB ("Groun Launched Small Diameter Bomb"), which is a constructive hybrid of booster stages (with a solid propellant charge solid propellant rocket) of rockets of the family M26A2 / M31A1 GMLRS and an inconspicuous gliding bomb GBU-39B SDB-I. So, if the SDB-I small-sized guided aerial bomb is integrated into the head of the M31A1 guided missile, capable of "throwing" this "equipment" at a distance of 70 km thanks to a more powerful solid-propellant charge of the accelerating stage, the total range of the promising GLSDB projectile can reach 180-200 km (with the stage of "throwing" the head of the projectile onto the stratospheric marching section of the trajectory and a further 130-kilometer segment of an independent dive of the GBU-39B bomb), which is quite capable of countering the performance of the updated 9М528 and 9М542 missiles for the Smerch / Tornado MLRS family FROM".

The following question arises: do the specialists of the experimental design department of the Tula NPO Splav have at their disposal any developments that can fend off the potential of the above-described brainchild of Boeing and SAAB in the theaters of war of the XNUMXst century? Naturally, yes.

Undoubtedly, one of the most interesting options is the project of a promising ultra-long-range 300-mm guided missile with an integrated ramjet engine for updating the ammunition load of the Smerch / Tornado-S MLRS. As you know, the design features of this product were given in a demo PDF document by NPO Splav, published several years earlier on the portal promkatalog.rf. The ability to regulate the intensity of the powder charge into the ramjet combustion chamber will provide a more optimal distribution of the fuel charge to all parts of the trajectory, which will allow a promising rocket to reach a range of about 250-300 km, and, as a consequence, almost 2 times surpass the American Swedish two-stage rocket GLSDB with a range of 150+ km.

There is no need to talk about the ability of this projectile to break through modern anti-missile "umbrellas" at the moment. Indeed, firstly, this projectile will be a unitary product with a non-detachable warhead, which will exclude the possibility of reducing the effective reflecting surface (EOC) below 0,1 sq. m. In light of equipping carrier-based AWACS aircraft E-2D "Advanced Hawkeye" with advanced anti-jamming AFAR radars AN / APY-9, capable of detecting such an object at a distance of 230-250 km (in contrast to 170 km in earlier AN / APY-2 radars E-3A / C aircraft), it is not difficult to assume that the probability of bearing these projectiles with the subsequent issuance of target designation to MIM-104F PAC-3MSE interceptor missiles will be quite high. The Smerchi missiles will not be able to neutralize the maneuverability of the MIM-104F antimissiles during the breakthrough of the Patriot missile defense umbrella due to the lack of transverse control engines in the control systems of the gas-dynamic belts, which are necessary to carry out transverse anti-missile throws on the trajectory.

Secondly, the continuous discharge of a jet stream (combustion products of a solid propellant charge) from a ramjet nozzle throughout the entire flight will increase the infrared signature of this version of the upgraded 300-mm rockets by hundreds of times, turning them into excellent targets for detection by means of optoelectronic complexes with a distributed AN / AAQ-37 DAS aperture of F-35A "Lightning II" fighters operating in the medium-wave infrared range and capable of transmitting target designation to friendly ground-based air defense missile defense systems via the Link-16 tactical network radio channel (of course, after processing in weapons control systems F-35A fighters).

Therefore, the most optimal option for countering the potential of the American-Swedish GLSDB projectile may be the conceptual reverse engineering of the latter by specialists from the Tula NPO Splav and the Tactical Missile Armament Corporation JSC. In particular, we are talking about the possibility of designing a hybrid upper stage solid propellant rocket with a 300-mm rocket type 9M542 and a reduced modification of the 9-A-7759 "Thunder-1" guided tactical missile, where the latter will be integrated into the multiple reentry vehicle (MIRV) of a promising projectile and placed in a deployable heat-resistant fairing-container (with a layout a la GLSDB) in order to avoid critical aerodynamic heating of the Thunder-1 rocket fairing at the stage of high-speed passage of a promising projectile through dense layers of the troposphere and stratosphere (on the ascending branch of the trajectory). As for the aforementioned reduction in the mass and size characteristics of the Grom-1 rocket before pairing with the solid-propellant projectile unit, it is dictated by the need to bring the Grom-1 hull diameter (together with the heat-resistant fairing) to the caliber of the 9M542 rocket, which is 300 mm. It is well known that the diameter of the Grom-1 rocket body is 310 mm, while for placement in a heat-resistant fairing it should not exceed 220-240 mm.

The flight profile of a promising two-stage 300-mm rocket and the principle of the head of a part (Thunder-1 rocket) on the main trajectory will be similar to those of the American-Swedish GLSDB projectile, but with the only difference that the discharge of the heat-resistant fairing of the second stage and the beginning stage of independent flight of the rocket "Thunder-1" will take place at a distance of about 120 km from the position of the launcher MLRS "Smerch" / "Tornado-S", while the independent flight of the planning bomb GBU-39B, detached from the booster block of the GLSDB projectile begins at a distance of 30-40 km from the MLRS MLRS position.

Thus, the aggregate range of action (including the 120-kilometer segment for reaching the marching section of the trajectory and the 150-kilometer segment of independent planning of the Grom-1 guided missile) of the promising guided missile for the Smerch MLRS will approach 270 km, significantly ahead of achievements obtained during the test of the GMLRS projectile. The noticeably smaller radar signature of the Grom-1 gliding units (about 0,05 sq. M compared to 0,1 sq. M for the original non-separable unitary projectile 9М542) will significantly complicate the AWACS aircraft operators' tasks of timely detection of an approaching threat and issuing target designation to combat crews of Patriot PAC-3MSE anti-missile systems, turning the Smerch multiple launch rocket system into a unique example of offensive weapons of the XNUMXst century.

Ctrl Enter
Noticed oshЫbku Highlight text and press. Ctrl + Enter
We are
What is the updated ammunition load of the Tornado-S MLRS capable of? 9M528 and 9M542 versions of rocketsTerrible hybrid for the breakthrough of Russian air defense in European theaters. "Tomahawks" seem childish game
Military Reviewin Yandex News
Military Reviewin Google News
50 comments
Information
Dear reader, to leave comments on the publication, you must sign in.