What is the updated ammunition load of the Tornado-S MLRS capable of? 9M528 and 9M542 versions of rockets 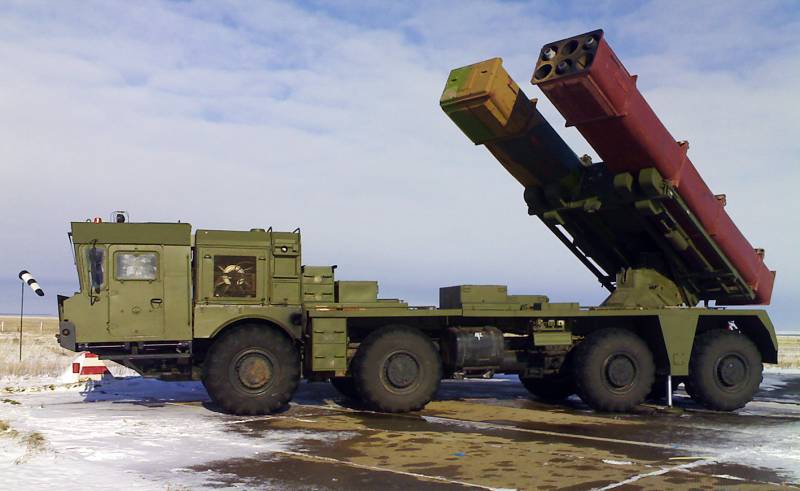 Undoubtedly, published in the news section of the Russian military-technical reference publication missilery.info (IS "Rocket Technique") on May 7, 2020, information about the signing by Russian President Vladimir Putin of decree No. 306 "On the award of the State Prize of the Russian Federation named after Marshal of the Soviet Union G.K. Zhukov in 2020 ”to highly qualified specialists of the top management level of the Tula Scientific and Production Association“ Splav ”for a significant contribution to the development of promising long-range 300-mm guided missiles for the 9K515“ Tornado-S ”MLRS based on the 9M528 / 542 adjustable RS family in the next once strengthened us in the opinion that it is this military-industrial enterprise that will continue to remain the key guarantor of ensuring the dominance of the rocket artillery battalions of the MFA of Russia in hypothetical counter-battery “duels” with the rocket artillery battalions of the ground forces of the NATO bloc member states, which have 227-mm high-precision new MLRS of the M270 MLRS / M142 HIMARS line with updated ammunition.

In particular, solid propellant rocket engines equipped with more massive and "long-playing" charges with a large specific thrust impulse (about 250-260 s) and a long burn-out period of solid propellant charges, as well as more modern ProNav inertial navigation systems based on advanced high-performance on-board computers, promising modifications The 300-mm super-long-range guided missiles 9M528 / 542 boast, firstly, the ability to maintain a high supersonic flight speed (2,5-3M) over a much larger section of the marching section of the trajectory, and secondly, the ability to prolong the altitude (stratospheric) profile flight even on the terminal section of the trajectory (up to the moment the projectile declines in the direction of the battlefield and target) due to the use of more complex and verified operating modes of the ProNav inertial navigation unit.

The aforementioned tactical and technical advantages allow the advanced missiles of the 9M528 and 9M542 line not only to hit the command and staff infrastructure, as well as the enemy mechanized subunits advancing to the active sector of the theater of operations in an operational depth of about 150 km, but also to easily disable the radars of illumination and guidance AN / MPQ-53 long-range anti-aircraft missile systems "Patriot PAC-2 GEM-T" due to the use of ballistic or quasi-ballistic flight trajectories, the terminal section of which will be a dive from the upper layers of the stratosphere at angles of more than 75-83 ° (outside the elevation sector of the radar view illumination and guidance of the MPQ-53, ranging from 1 to 73 degrees).

Under these conditions, the semi-active radar seeker of the MIM-104E anti-aircraft missiles will not be able to receive from the AN / MPQ-53 radars the illumination of the 9M528 / 542 advanced rockets diving at vertical angles, while on the marching section of the trajectory, characterized by an altitude of flight with an apogee of about 35— 40 km, the MIM-104E GEM-T interceptor missiles will not be able to oppose the Tula 9M542 missiles with absolutely nothing, since they have only aerodynamic rudders that lose their effectiveness in the rarefied layers of the stratosphere.

Consequently, the only interceptor missiles that pose a threat to URSs of the 9M542 family will continue to be the MIM-104F PAC-3MSE anti-missiles of the Patriot PAC-3MSE complexes, which are equipped with Ka-band millimeter active radar seeker and are capable of intercepting air attack weapons using target designation from the AWACS AWACS AWACS aircraft, absolutely not needing continuous illumination from the side of the battery-operated radar for the AN / MPQ-3/53 illumination. But here, too, there are some nuances ...

In the conditions of oversaturation of the airspace of the conventional theater of military operations with hundreds of low-altitude, stealthy multipurpose tactical and anti-ship missiles (Kh-101, Kh-38, Kh-59MK / 2, 3M55 "Onyx", etc.), tactical aviation, strike reconnaissance UAVs and electronic warfare aircraft of the Russian Aerospace Forces (including container and integrated onboard electronic warfare systems L-175V / 265M10 and KS-418E "Khibiny-10V / M" and "Himalayas", installed on front-line bombers Su-24M, multifunctional fighters Su-30SM / 1, Su-35S, as well as fighters of the 5th generation Su-57, operators of AN / APY-2 radar systems of RLDN E-3G aircraft may well be distracted by operations to detect and support and issue target designation of a friendly tactical airborne forces of NATO for air targets with a larger effective scattering surface (EPR) than 300-mm rockets of the 9M528 / 542 type. Moreover, the energy potential of the AN / APY-2 "air radars" of the AWACS system allows detecting targets with an effective reflecting surface , 0,1 sq. M (corresponds to the EPR of 300-mm rockets MLRS "Smerch / Tornado-S") at a distance of no more than 170-200 km, which excludes the possibility of early detection and intact Instructions to friendly ground-based air defense systems by means of NATO E-3C / G RLDN aircraft in case of operating the latter at a distance of more than 250 km from the active area of ​​the theater of operations.

As a result, in the above situation, the combat control points of IBCS / EOC ("Engagement Operation Centers") of the Patriot PAC-3MSE complexes in general and the MIM-104F PAC-3MSE missiles interceptors in particular may be deprived of vital target designation over protected radio channels of the tactical network "Link-16" along the 9М528 / 542 missiles reaching the terminal section of the trajectory, which will eventually entail the destruction of AN / MPQ-53/65 radars and the incapacitation of either one battery or a full-fledged anti-missile regiment "Patriot PAC-3MSE" ...

The most piquant moment in this situation is that in the absence of target designation from third-party radar reconnaissance means, the destruction of a full-fledged anti-missile battery "Patriot PAC-3MSE" can be carried out using only a couple of three (possibly one) of the latest Tula high-precision shells family 9М542.

The conclusion suggests itself the following: 300-mm multiple launch rocket systems of the "Smerch" / "Tornado-S" family, equipped with promising high-precision missiles of the 9M542 line, can be used not only as instruments for delivering surgical precision strikes against remote command and staff infrastructure of the enemy and achieving superiority over the enemy in "counter-battery duels", but also as highly effective operational-tactical missile systems, "sharpened" for the implementation of anti-radar operations and the tasks of suppressing enemy air defense and missile defense systems.

Ctrl Enter
Noticed oshЫbku Highlight text and press. Ctrl + Enter
We are
Situational analysis of the death of the MH17 flight (Malaysian Boeing 777), made on the basis of engineering analysis from 15.08.2014Results of the week. "God forbid to see Russian revolt, senseless and merciless!"
Military Reviewin Yandex News
Military Reviewin Google News
29 comments
Information
Dear reader, to leave comments on the publication, you must sign in.