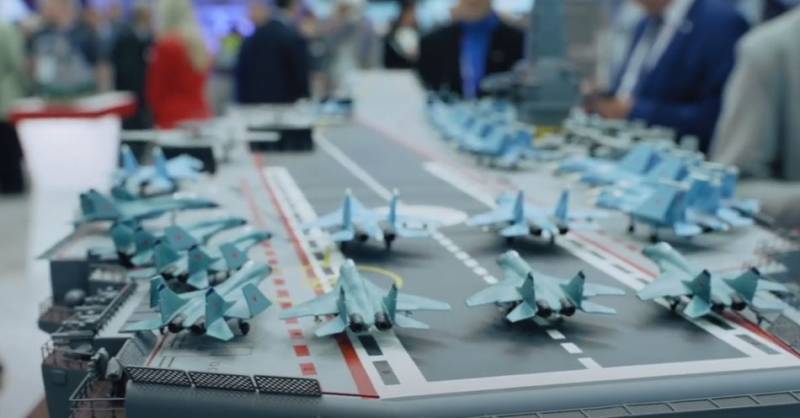 At the end of June, as a result of a closed tender, the United Shipbuilding Company (USC) selected a dry dock construction contractor to repair the only Russian aircraft carrier Admiral Kuznetsov. According to the general director of the USC, Alexei Rakhmanov, they became the company Orgenergostroy.

The contractor began work in Murmansk and promised that by the summer of 2021 a warship could be docked.

The head of USC said that repair work at Kuznetsovo is on schedule and that there will be no black smoke after repairs on the aircraft-carrying cruiser:

I think that will not smoke.
In addition, a tender had previously been held to determine the contractor for the repair work. It was attended by the only company, which was entrusted with the repair. The contract value amounted to 251,4 million rubles. The contractor will have to clean and paint the superstructure, as well as repair the hull superstructures.

The ship suffered significant damage after a fire that occurred in December last year during repairs. When welding was carried out, the spark fell into the hold, where fuel was spilled. As a result, two people died and another 14 were injured. The fire was extinguished for almost a day.

Repair of the aircraft carrier began in 2017, at the end of the Kuznetsov’s Syrian campaign. It was decided to carry out repairs and modernization. The Zvezdochka Shipbuilding Center took up this task. It was planned to install new air defense systems on the ship, replace energy equipment, equip the aircraft carrier with new boilers and pumps. In addition, modernization of flight support systems is foreseen. aviation.

The more time the only aircraft carrier of the Russian Navy is being repaired (modernized), the more questions appear in the expert community about how exactly this warship can protect Russia's interests in the oceans? Questions are also related to statements that a promising aircraft carrier can be built in Russia. We are talking about the model of the aircraft carrier of the 5 Storm project from the Krylovsk Research Center, demonstrated more than 23000 years ago. According to the project, this is a real marine giant with a displacement of up to 100 thousand tons, a length of about 330 m and a crew of up to 5 thousand people.

Earlier it was reported that the laying of the 1st aircraft carrier of project 23000 “Storm” (“Manatee”) could be carried out by 2025, and that the basis for its wing would be deck versions of the Su-35 and Su-57 fighters (Su-35K and Su-57K ) So far, official sources have not even presented such versions of the 4 ++ and 5 generation fighters even in the form of mock variants. Tests of the "regular" (non-deck) version of the Su-57 are ongoing.

There was also information that the Storm aircraft carrier will be equipped with the latest Pro-Mortar Air Defense System S-500K (SAM) - a ship-based version.

Thus, in the case of approval of the project of a promising aircraft carrier, both the Admiral Kuznetsov and the Storm may simultaneously be part of the Navy. True, the price of the issue expressed earlier is at least 350 billion rubles. It was in this amount that the implementation of the mentioned Storm project was evaluated.
Ctrl Enter
Noticed oshЫbku Highlight text and press. Ctrl + Enter
We are
Reports from the militia of New Russia for 27-28 September 2014 of the year"Varyag" in China. View from Ukraine
Military Reviewin Yandex News
Military Reviewin Google News
177 comments
Information
Dear reader, to leave comments on the publication, you must to register.