Kommando Spezialkräfte. Bundeswehr under the influence of right-wing extremists 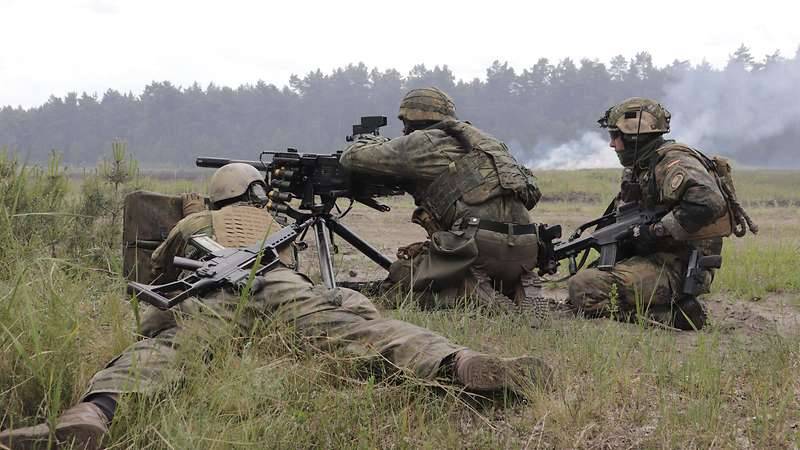 In Germany, a loud political and military scandal erupted. The scandal that has been waiting for a long time and which the Germans themselves feared, having well learned the lessons of the Second World War. The Bundeswehr, according to official reports by the German Ministry of Defense, was partially influenced by right-wing extremists and neo-Nazis. This applies to the most elite units of the German army. In particular, the secret part, which is known as Kommando Spezialkräfte (KSK).

Unlike other armies of the continent, the Bundeswehr in its modern form is a parliamentary army. Simply put, the order to start hostilities or the use of the army in some conflicts outside of Germany is not given by the chancellor, but by parliament. The German soldier is territorially limited in his actions by the territory of the countries that are part of the NATO bloc.

Accordingly, the majority of military issues, including the appointment of the Minister of Defense, are coordinated by the leadership of the Defense Ministry with parliament. Yes, and reports for his actions also in parliament. Hence the actions of the frau minister. At a press conference in parliament on July 1 this year, she told reporters about the beginning of the reform of special forces, in particular Kommando Spezialkräfte.

What is the reason for this harsh statement by Annegret Kramp-Karrenbauer? If we discard unnecessary words, it turns out that the main fault of the German special forces is "a kind of elitism, isolation from other parts of the Bundeswehr," which helps to spread radical sentiments among the fighters! At the same time, probably understanding how the specialists will react to such a statement, the Minister said that most of the special forces are “loyal to the constitutional system of the FRG”.

What is Kommando Spezialkräfte (KSK)

To understand what KSK is, it is enough to quote one document of the Bundeswehr. it

"Part of an army unit for conducting military operations in the framework of crisis prevention and crisis confrontation, as well as in the framework of the country's defense and the defense of NATO allied states."
Hence the tasks of this unit. Reconnaissance, sabotage in the deep rear, destruction of political and military leadership, guiding missiles at targets behind enemy lines, work against enemy sabotage groups, releasing prisoners of war and other tasks that “cannot be performed by ordinary army units due to their specificity or insufficient training” .

KSK is part of and reports to the Special Operations Division (Div. Spezielle Operationen). The headquarters is located in southern Germany, in Calw. The unit is top secret. Moreover, the secrecy is so high that even family members do not have the right to know about the officer’s service.

According to leaks through the media, the total number of KSK fighters is between 1000 and 1100. By experts, it is estimated as 200-300 directly operating fighters. Units are divided into 4 companies. The division is rather arbitrary: according to the method of penetration into the territory of the enemy. Accordingly, the 1st company - on land, the 2nd - by air, the 3rd - from the water, the 4th - in difficult climatic or geographical conditions.

In addition to combat units, there is a support company. An interesting unit whose mission is reconnaissance, countering enemy snipers, distracting actions, etc. Consists of veterans of the unit and specialists of the highest level. And the last division is management. There is no real structure in open access.

Usually they work in a group of 4 people, approximately equal in training: a signalman, a sapper, a medic and a specialist in arms. As necessary, attract other specialists from the support company.

Training a fighter usually lasts from 2 to 3 years and takes place in real conditions for which the group is intended. Currently, 17 “schools” are known around the world. In particular, in Norway they prepare specialists for the Arctic, in Austria - mining specialists, in Israel and the USA (Texas) - for work in the desert, in San Diego - at sea, in Belize - in the jungle.

Why counterintelligence in Germany will be difficult to work with KSK

It is difficult to imagine a situation that the German media once mentioned in their materials. Information then passed quietly and imperceptibly. In April 2017, counterintelligence received materials on the wires for the resignation of one of the officers (according to other sources, commanders) of the 2nd KSK company. The soldiers listened to the music of right-wing radical rock groups (as in the MAD report), raised their hands in a Nazi salute and had fun throwing pig heads to each other! Here is what Der Spiegel reports on this subject:

“The 45-year-old chief staff sergeant sergeant major [senior non-commissioned officer rank in the German army] Philip S. participated in a party with other soldiers. The festivities were accompanied by neo-Nazi music and regular demonstrations of greeting from the time of the Third Reich. In addition, during the party, guests were offered contests, in particular, throwing pork heads. ”
During a search in the house (three years after the incident), a Kalashnikov rifle, cartridges and plastids were found in the specialist’s house! Moreover, the fighter himself claims that he received weapons and ammunition in the Bundeswehr. Agree that for a specialist who has served in a special unit of this level for at least 20 years, taking into account age restrictions on admission, who practically began his service at the very beginning of the formation of KSK (officially formed in 1996), all this looks rather funny.

MAD’s statement about the suspicion of 20 commandos in radical right-wing looks looks just as funny. Either the counterintelligence officers are joking so unsuccessfully, or their boss Christoph Gramm deceived the German parliamentarians at the June 29 hearing when he announced the “wall of silence” at KSK, or both, as agreed with the German Ministry of Defense.

“When investigating these reports, employees stumbled upon a wall of silence, but still managed to breach it.”

Shout out loud to quietly hush up the problem

The same head of the German military counterintelligence Christoph Gram said at a parliamentary hearing that his department is currently investigating about 600 cases of a possible connection between the Bundeswehr military and the right-wing radicals and the informal association of the Reich Citizens. Naturally, 20 commandos from Kommando Spezialkräfte are also included here.

Moreover, the Gram Office today is investigating yet another alarming fact. From the arsenals of the German army 82 thousand live ammunition and 62 kilograms of explosives disappeared without a trace! This is what MAD already knows.

Reformation of the German Army

The fact that the United States has changed its attitude towards the Bundeswehr is already obvious. Previously, the German military was convinced that it was the German army that was the basis of the NATO bloc and the main ally of the United States, but today the Americans in every possible way show the Germans that the East European armies “love” more. In particular, the Poles. The withdrawal of some units from Germany is openly discussed, as is the relocation of nuclear weapons to Poland.

It is no secret that numerous NATO exercises showed the weakness of the German army. Her inability to carry out combat missions without the help of allies. And this is with a fairly decent investment in the army. It turns out a paradoxical situation: Germany contributes huge amounts of money to the alliance’s budget, but at the same time its own army, as the basis of the bloc in Europe, leaves much to be desired.

And the emergence of ideas of revenge after the defeat in World War II among the new generation of Germans is understandable. Germany has no territorial claims to its neighbors ... Germany may not have, but specific Germans have. History It doesn’t invent anything new, it simply repeats events in new historical conditions. In history, as in classical literature, the plots are similar, but the surroundings are different.

I get the impression that Germany is really starting a serious reform of the Bundeswehr. Look at what the Secretary of Defense says between the angry exclamations about the radical right. And Annegret Kramp-Karrenbauer says not about the destruction of German special forces or units. Not even the eradication of radicalism in the army. Although everything looks exactly like that.

Minister Frau speaks of the unification of elite units and the bulk of the Bundeswehr. Simply put, to increase the combat readiness of the Bundeswehr! On the change of the selection system to the elite of the armed forces. The fact that the first stage of training of specialists now needs to be carried out precisely in the troops, and not at special training grounds. Even the fact that the airborne division is proposed to be disbanded is well within this scheme.

Germany does not want to be on the sidelines.