August 2 2012
44
Exactly 50 years ago, 2 August 1962, the first prototype of the multipurpose Mi-8 helicopter took off for the first time. Mi-8 (according to Hip's NATO classification) is a Soviet and Russian multi-purpose helicopter, created by the Mil Design Bureau M. Mil at the beginning of the 60s of the last century. It is currently the most massive twin-engine helicopter in the world, and is also among the most massive helicopters in the world. stories aviation. It is widely used to solve a large number of civilian and military tasks. The helicopter has been in service with the Soviet Air Force since 1967 and has shown itself to be such a successful type of equipment that its purchases for the Russian Air Force continue to this day. At the same time, the Mi-8 helicopter is operated in more than 50 countries of the world, including such countries as China, India and Iran.


During its half-century history of serial production and design work on the improvement of this helicopter, Soviet and Russian designers created an order of 130 of various modifications, produced more than 13 000 machines of this type. To date, these are the Mi-8MTV-1, MTV-2, MTV-5, Mi-8AMTSH, Mi-171, Mi-172 helicopters. In 2012, the Mi-8 is not just a jubilee - it is a first-class multifunctional helicopter, which today is one of the most successful products of the domestic helicopter industry. Even after 50 years, the car is in demand around the world and is even acquired by NATO member states. From 2006 to 2008, X-NUMX of Mi-26Sh military transport helicopters was delivered to the Czech Republic and Croatia.

Today, the Mi-8 / 17 production plants of Ulan-Ude Aviation Plant OJSC and Kazan Helicopter Plant OJSC, which are part of the Russian Helicopters holding company, function stably and are loaded with orders for the production of these helicopters for the 2 years ahead. At the same time, work on the modernization of this machine is continuously ongoing. OJSC Moscow Helicopter Plant M.L. Mile "today assembles the first prototype of an upgraded version of the Mi-171А2 helicopter, and the technical appearance of this helicopter is also defined. The helicopter was created on the basis of the Mi-171 helicopter and should be a worthy option for the development of the entire family of Mi-8 helicopters. 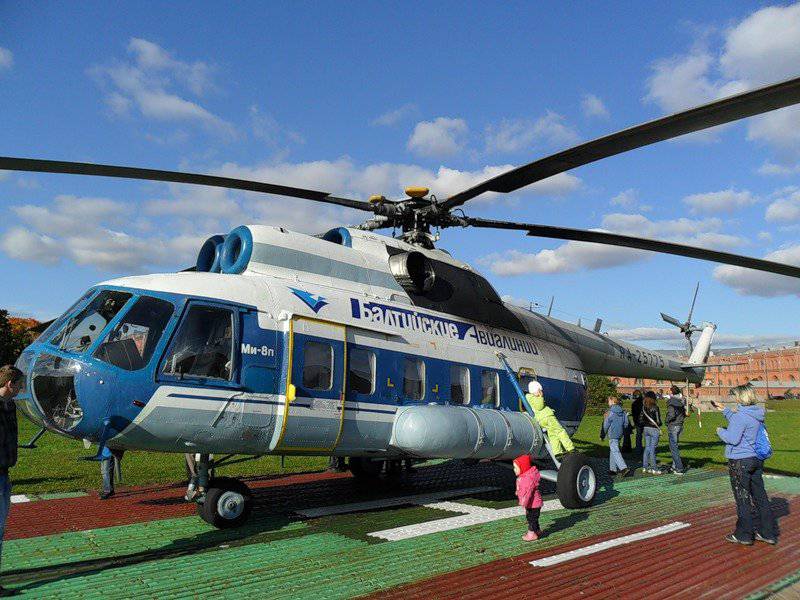 Mi-8P passenger
It is planned that these helicopters will receive new avionics, and composite materials will be used in the design of the machine, which will make the helicopter significantly lighter. In addition to this, all major units and systems of the machine were upgraded, its flight and technical characteristics were increased. Total upgrades include about 80 innovations. In this case, the crew of the helicopter will be reduced to 2-x people, which will significantly affect its economic efficiency.

During its history, the Mi-8 family of helicopters took part in a large number of local conflicts, they saved thousands of human lives, withstood severe Siberian frosts, catastrophic heat and extreme temperatures, desert dust and tropical storms. Mi-8 flew at extremely low altitudes and high in the mountains, were based outside the airfield network and landed in hard-to-reach places with minimal maintenance, each time proving their high reliability and efficiency. Created in the middle of the last century, the multipurpose helicopter Mi-8 is today one of the most sought-after in its class and for many years to be in demand in the Russian and international aircraft market. Over the years, the production of the Mi-8 has become the basis for many unique developments, for example, the amphibious helicopter Mi-14.

The design of the Mi-8

The Mi-8 helicopter was made using a single-rotor scheme with a tail rotor, a three-bearing chassis and two gas turbine engines. The fuselage of the car has a frame structure and consists of a bow, center, tail and end beams. In the nose of the helicopter is a crew cabin for three people: two pilots and flight mechanics. The cockpit glazing provides the helicopter crew with a good overview, the right and left blisters are made movable and equipped with emergency dropping mechanisms. 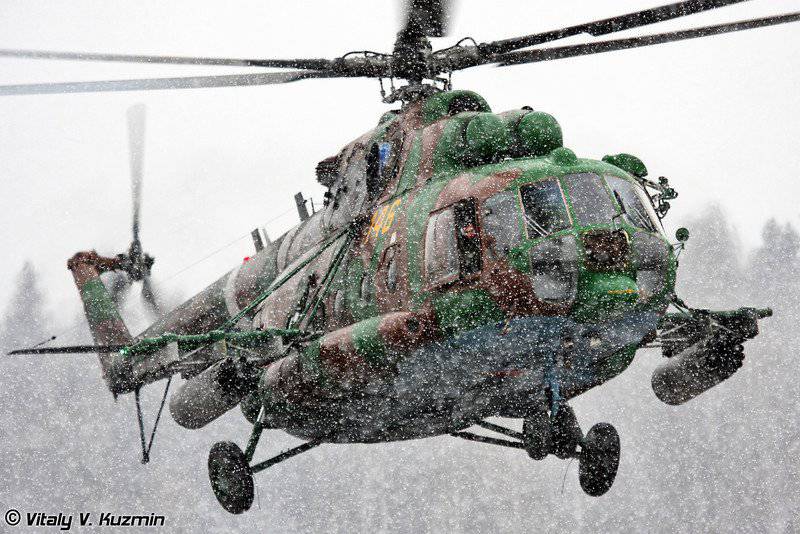 In the central part of the fuselage was a cabin measuring 5.34 x 2.25 x 1.8 meters. In the transport version, it had a cargo hatch with doors that increased its length to 7,82 m. And a central sliding door the size of 0,62 by 1,4 meter, which had an emergency drop mechanism. There was an electric winch and mooring knots on the floor of the cargo compartment, and an electric winch boom was mounted above the door itself. The helicopter's cargo cabin was designed for transporting loads weighing up to 4 tons and was equipped with folding seats, which could accommodate 24 passengers, there were also attachment points for 12 stretchers. At the request of the customer, an external load suspension system can be installed on the helicopter: articulated-pendulum for 2500 kg. and cable for 3000 kg., as well as a winch with a load capacity of 150 kg.

In the passenger version of the helicopter, the cabin measured 6.36 x 2.05 x 1.7 meters and was equipped with 28 seats, which were placed in the 2 row on each side with 0.74 spacing meters and 0.3 passage m. the doors were made under the rear entrance door, which consisted of a ladder and doors.

The helicopter chassis was tricycle, non-retractable. The front landing gear was self-orienting and consisted of 2-x wheels measuring 535 x 185 mm. The main supports of the shaped-type helicopter were equipped with liquid-gas two-chamber shock absorbers and wheels of size 865 x 280 mm. The helicopter also had a tail support, which served to prevent the tail rotor from touching the ground. The support consisted of a shock absorber, 2-x struts and support heel. The chassis gauge was 4,5 meters, the base of the chassis was 4,26 meters. 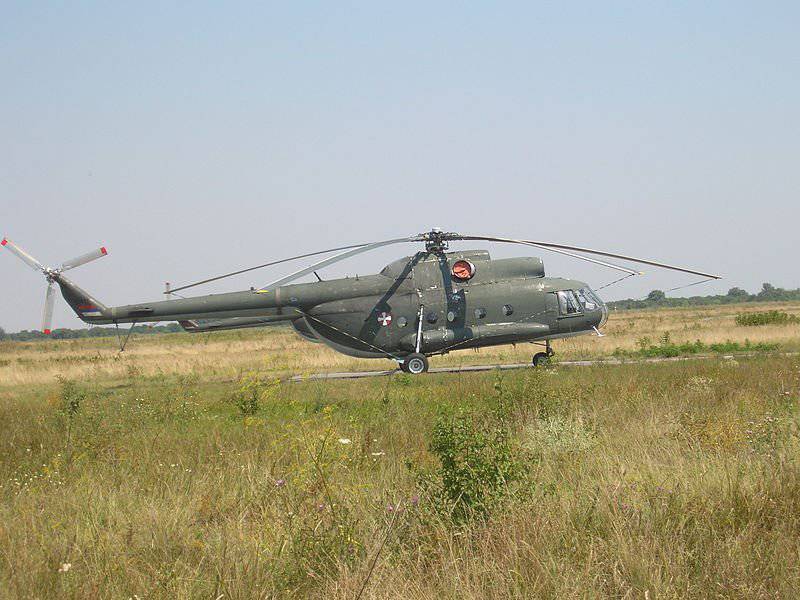 Mi-8T Serbian Air Force
The power plant of the helicopter included 2 turboshales of the GTE with the free TV2-117AT turbine produced by the St. Petersburg NPO. V.Ya.Klimova. On Mi-8T helicopters, its power was 1250 kW, the Mi-8МТ, AMT and MTB installed a TVZ-117МТ turbine with a power of 1435 kW. Gas turbine engines were mounted on top of the fuselage and were covered with a common hood, which has opening flaps. The engines of the helicopter were supplied with dust protection devices, their weight was 330 kg. 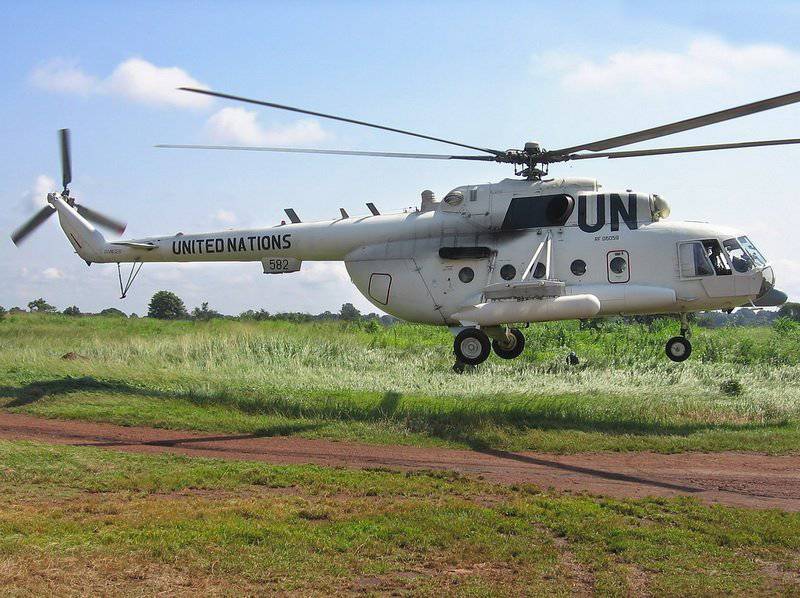 The Mi-8 helicopter was equipped with a ventilation and heating system that supplied cold and heated air to the passengers and crew cabins. Also, the helicopter had an anti-icing system that protected the steering and propeller blades, as well as the air intakes of the engines and the front windows of the crew cabin from icing. Equipment for instrument flights in adverse weather conditions, as well as at night, included artificial horizon, a combined course system, a radio altimeter, an automatic radio compass, and an 2 rotor speed indicator.

Currently, the Russian Armed Forces continue to buy Mi-8 helicopters. As part of the state defense order up to 2020, the Mi-8AMTSH vehicles must go to the troops. Mi-8AMTSH - is an assault military transport helicopter (export designation Mi-171Sh). The helicopter is designed to combat armored ground, surface, mobile and stationary small targets, to destroy enemy personnel, transport troops, cargo, wounded, as well as perform search and rescue operations. The helicopter was developed at the Ulan-Ude Aviation Plant in close cooperation with OAO MVZ im. M.L. Mile.

To solve combat missions, the helicopter can be equipped with a system of missile and small arms and cannon armament, as well as a set of means of protection against destruction, sanitary and amphibious transport equipment, as well as instrumentation and electronic equipment that allows the helicopter to fly at any time of the day, including and in adverse weather conditions. At the same time, the conversion of the Mi-8AMTSH helicopter from the combat version to the sanitary or airborne transport does not take much time and can be carried out directly during the preparation for the flight to perform the corresponding mission. 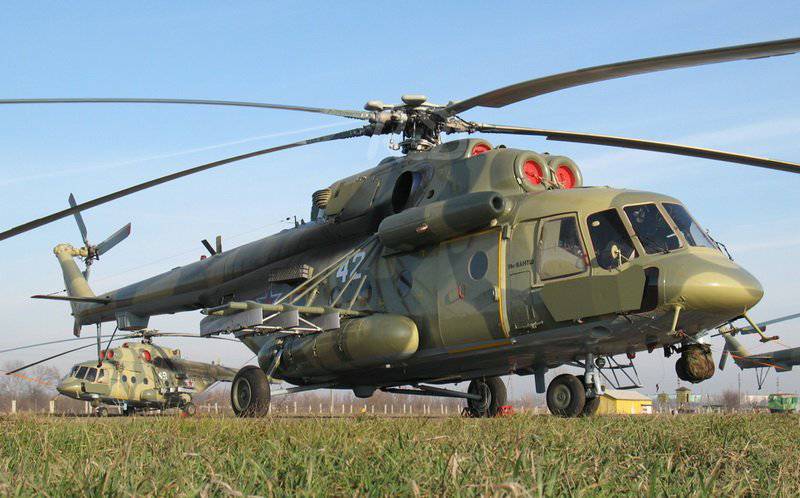 Mi-8AMTSH (export version of the Mi-171Sh)
To increase the combat survivability of the vehicle, this helicopter is equipped with an ASO-2B automatic deflector-discharge device, an EVA screen-exhaust device, a set of removable armor plates that cover the crew, protected by hanging fuel tanks, as well as fuel tanks with polyurethane foam filler.

- the commander - the left pilot, is engaged in piloting the helicopter, carries out aiming and use of unguided weapons; when launching guided missiles, it performs a “shooting” mode.
- the second pilot, is engaged in piloting a helicopter to help the commander of the crew; performs the functions of the operator of the "Sturm-V" complex when searching for targets, launching and targeting guided missiles, and also performs the duties of a navigator.
- the flight mechanic, in addition to performing his full-time functions, also performs the functions of the stern and bow machine-gunners.

The main distinguishing feature of the Mi-8AMTSH helicopters was the inclusion of the modern-purpose “Igla-B” air-to-air missile in the composition of their armament. The complex of high-precision guided missiles "Sturm" allows you to effectively hit armored vehicles, including those equipped with dynamic defense, low-speed air targets, manpower and fortified enemy locations. In terms of the range of possible weapons, MI-8AMTSH came very close to the attack helicopter Mi-24, while having a greater variability of use.