100 years of the best Soviet ace 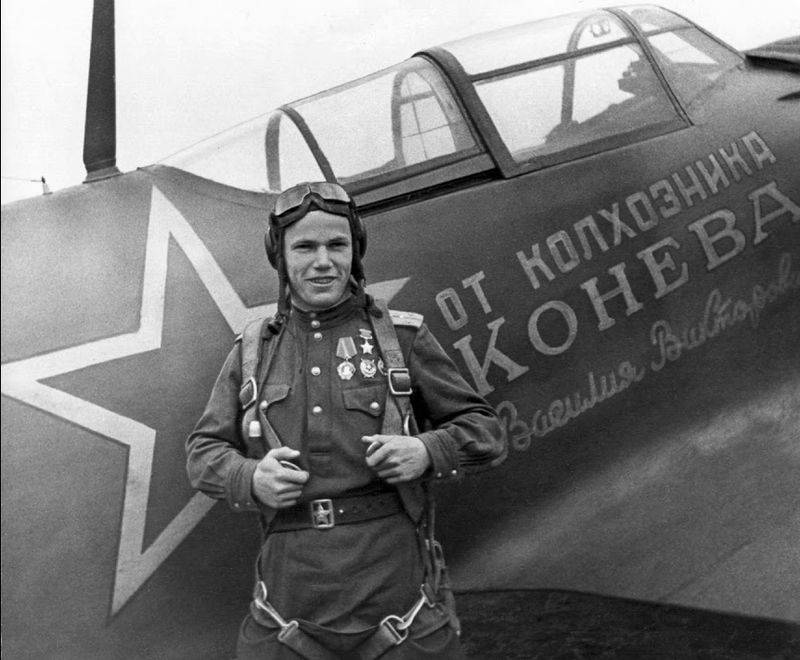 Ivan Nikitovich Kozhedub near the La-5FN

On June 8, 1920, Ivan Nikitovich Kozhedub, three times future Hero of the Soviet Union, a participant in the Great Patriotic War, a famous air ace and marshal was born in the Glukhovsky district of the Chernihiv province aviation. It was Ivan Kozhedub who holds the personal record for the number of air victories among all fighter pilots of the countries of the anti-Hitler coalition: 64 enemy aircraft shot down.

Ivan Nikitovich Kozhedub was born on June 8, 1920 in the village of Obrazhievka, located in the Glukhovsky district of the Chernigov province, today is the territory of the Shostka district of the Sumy region of Ukraine. The parents of the future ace pilot were ordinary peasants. My father was a church leader (this is a secular position held by people in charge of church economy). From his father, who independently learned to read and write and liked to read, Ivan adopted love and a thirst for knowledge. In 1934, Kozhedub graduated from a seven-year school and continued further education, first enrolling in an evening school at the factory school (FZU), and in 1936 at a chemical-technological college located in the city of Shostka.

In Shostka, Ivan Kozhedub took his first steps into the sky. In 1938, Ivan Kozhedub came to a local flying club, and in April 1939 made his first flight. Passion for aviation forever determined the fate and life path of the famous pilot. It was from the Shostka flying club that Ivan Kozhedub went to military service, enrolling in the Chuguev Military Aviation School in 1940.

It is curious that in childhood, while still a schoolboy, and then a student at a technical school, Ivan Kozhedub was very fond of drawing. In school years, Ivan was often attracted to the creation of posters, he well displayed various slogans and took part in the design of wall newspapers. Later, already becoming a pilot, Ivan Kozhedub said that drawing helped him in the profession, which became the main thing for him for life. According to the ace pilot, his love of drawing developed a good visual memory, observation, and working with various fonts and posters became a good training for the eye, which was especially important in flight and aerial combat. 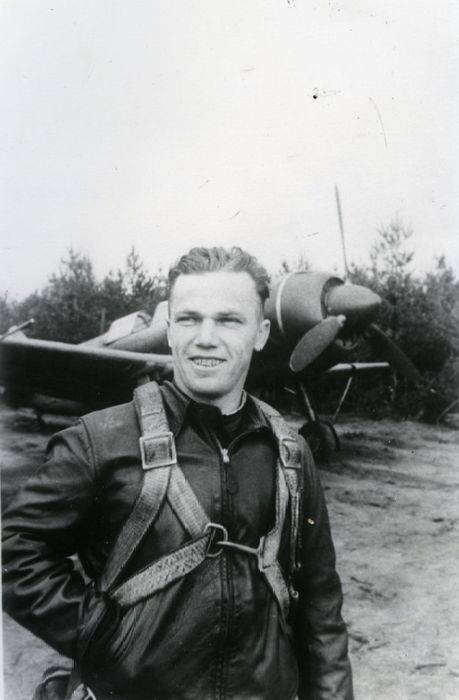 Ivan Nikitovich Kozhedub, photo: state catalog.rf
Another hobby of the pilot was gymnastics. Ivan Kozhedub was the youngest, fifth child in the family. From childhood, the boy was not particularly tall, but was physically fit, and his health never failed. In the future, all this was also useful in his profession. At the age of 13, the boy witnessed the arrival of circus artists in the village, especially Ivan was shocked by a strong man who freely squeezed a two-pound (32 kg) weight with one hand. Later, Kozhedub himself learned this, having achieved everything with training. The physical endurance that the future pilot developed from an early age was very useful in air battles, which exhausted the pilot's body and were accompanied by serious overloads. Even at the front, Ivan Kozhedub always tried to find free time to do exercises.

In the first sortie, the future ace pilot nearly died

In February 1940, Ivan Kozhedub, after passing a rigorous medical examination and selection, was enrolled in the Chuguev Military Aviation School. In March 1941, the status of the school was reduced to the school of pilots. This decision meant that upon graduation, the pilots received the rank of sergeants, and not lieutenants, as it was before. Despite this, Kozhedub did not write a transfer application, continuing his studies. As a cadet, Kozhedub gradually mastered the UT-2 and UTI-4 aircraft, and later the I-16 fighter.

Having appreciated the talent of the pilot, the school management decided to leave Ivan Kozhedub in the educational institution as a pilot instructor. That is how the future ace pilot met the Great Patriotic War. Kozhedub’s report on sending him to the front was not satisfied, the country needed good instructor pilots to prepare new personnel for the Air Force. Ivan Kozhedub achieved transfer to the army only in the autumn of 1942. In November of the same year, the pilot arrived in Moscow and was enrolled in the 240th fighter aviation regiment, where he underwent flight training on the new Soviet La-5 fighter. After the personnel had mastered the new combat vehicle, the regiment was sent to the Voronezh Front, where it arrived in March 1943. 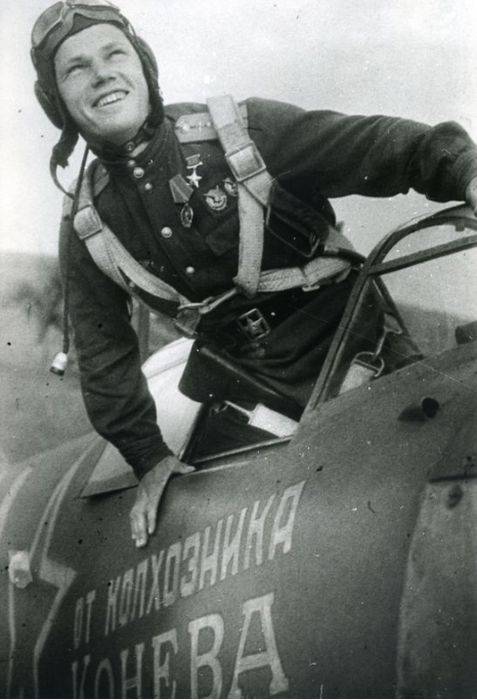 Ivan Nikitovich Kozhedub, photo: state catalog.rf
The first air battle almost ended for our hero with death. La-5 was seriously damaged by the line of the German fighter Me-109. From the death of Ivan Kozhedub saved the armored back, which was not pierced by an incendiary shell. Already on approaching the airfield, the damaged fighter was fired by its own anti-aircraft gunners, having achieved several hits in La-5. Despite this, the pilot managed to land the plane at the airport, however, the fighter was no longer subject to recovery. After this incident, for some time, Kozhedub flew on the “remnants”, the so-called those squadron aircraft, which for some reason were free.

In June 1943, Ivan Kozhedub was awarded the rank of officer, he became a junior lieutenant, and by August he became deputy squadron commander. The ace pilot won his first air victory during the Battle of Kursk. A grand confrontation between the two howling armies unfolded in early July 1943 on earth and in the sky. July 6, during his fortieth sortie, the pilot won his first victory, shooting down a German dive bomber Ju-87. And then - as it broke through, the very next day Kozhedub again shot down the “raptor”, and in the air battles on July 9 he wrote down the first two German fighters - Me-109, on his personal account. By the end of 1943, the ace had already 25 enemy aircraft destroyed.

While another famous Soviet ace, Alexander Pokryshkin, won most of his victories on the P-39 Aerocobra Lendliz fighter, then Ivan Kozhedub flew the whole war on Soviet Lavochkin fighters: La-5, La-5FN and La-7. These fighters are rightly considered one of the best Soviet combat aircraft of the Second World War.

Kozhedub fought on the La-5 fighter from March 1943 to the end of April 1944. This single-seat fighter, created in 1942 in Gorky, was released in a large series - almost 10 thousand aircraft. The car of the designer Semyon Alekseevich Lavochkin was distinguished by very good flight performance. The maximum speed at an altitude of up to 580 km / h, the practical ceiling is 9500 meters, and the practical range is 1190 km. At the same time, the fighter was distinguished by powerful cannon armament - two 20-mm ShVAK automatic guns were installed on it. 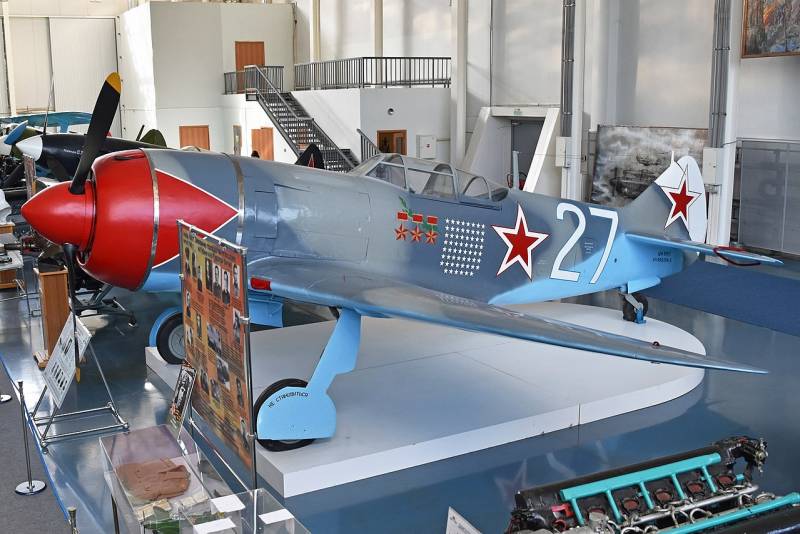 Fighter La-7, which flew Ivan Kozhedub
From May 1944 to August 1944, Kozhedub fought on the La-5FN fighter, which was an improved version of the previous fighter with the new more powerful M-82FN engine, which produced 1460 hp (130 hp more than the M- 82 La-5 fighter). The increase in power was significant and allowed to bring the maximum speed of the fighter to 648 km / h, and the practical ceiling grew to 11 meters. It is curious that the new La-200FN fighter, on which Kozhedub fought, was built with money from the 5-year-old beekeeper Vasily Viktorovich Konev from the Bolshevik collective farm located in the Stalingrad Region. Flying on this registered plane, in a week of air battles in the Romanian sky, an ace pilot shot down 60 enemy aircraft.

Ivan Kozhedub ended the war on the La-7 fighter, which was a further development of the La-5FN, and made its first flight on January 23, 1944. This aircraft is rightfully considered one of the best front-line fighters of World War II. The aircraft had significantly improved aerodynamics, which provided the fighter with an advantage in speed, climb and practical ceiling compared to the usual La-5. At the same time, the car also received a new, more powerful engine, with it the maximum speed of the aircraft at altitude could reach 680 km / h. Flying on this fighter at the final stage of World War II, Ivan Kozhedub shot down 16 enemy aircraft. It is noteworthy that the La-7 fighter, on which the ace pilot flew, has survived to this day and today is on display at the Central Museum of the Air Force of the Russian Federation.

Ivan Kozhedub has never been shot down

Ivan Nikitovich Kozhedub arrived at the front in March 1943. From that moment until the very end of the war, the ace pilot was never shot down. For several years at the front, Ivan Kozhedub made 330 sorties, having conducted 120 air battles. Of course, anything happened in the air. The hero’s plane was repeatedly pierced by lines of German machine guns and aircraft guns. But not one of the hits ended with a serious wound or death of the pilot, partly this was due to strong luck, but, of course, testified to excellent skills in air combat. 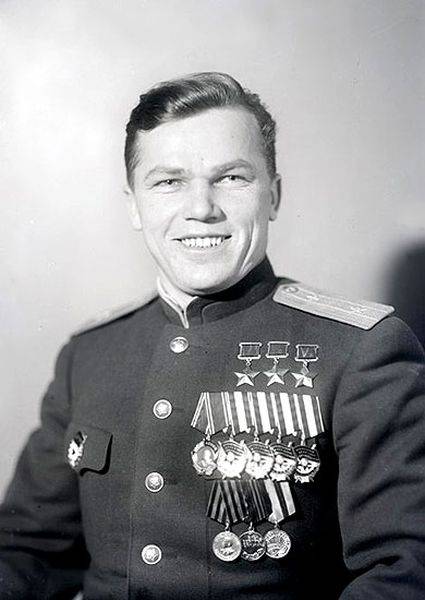 Three times Hero of the Soviet Union Ivan Nikitovich Kozhedub
At the same time, the skill of the ace pilot was especially evident in the fact that Kozhedub always managed to return the damaged fighter to the ground. He never left the plane, using a parachute. Affected by a serious level of pre-war training at the flight school and work as an instructor. The high level of piloting technology by Ivan Kozhedub has never been doubted by anyone.

During the war, the pilot, according to official Soviet historiography, shot down 62 enemy aircraft. But, as further studies have shown, for some reason, two more downed planes, which were officially confirmed and were recorded in the personal account of Ivan Kozhedub, did not enter this number. Thus, in 120 air battles, the brave pilot shot down 64 enemy vehicles: 21 Fw-190 fighters, 18 Me-109 fighters, 18 Ju-87 dive bombers, three Hs-129 attack aircraft, two He-111 bombers, one PZL P- fighter 24 (Romanian) and one Me-262 fighter jet. At the same time, Ivan Kozhedub, apparently, became the first Soviet pilot who managed to shoot down a German fighter. The ace pilot won this air victory on February 24, 1945 during a free hunt. 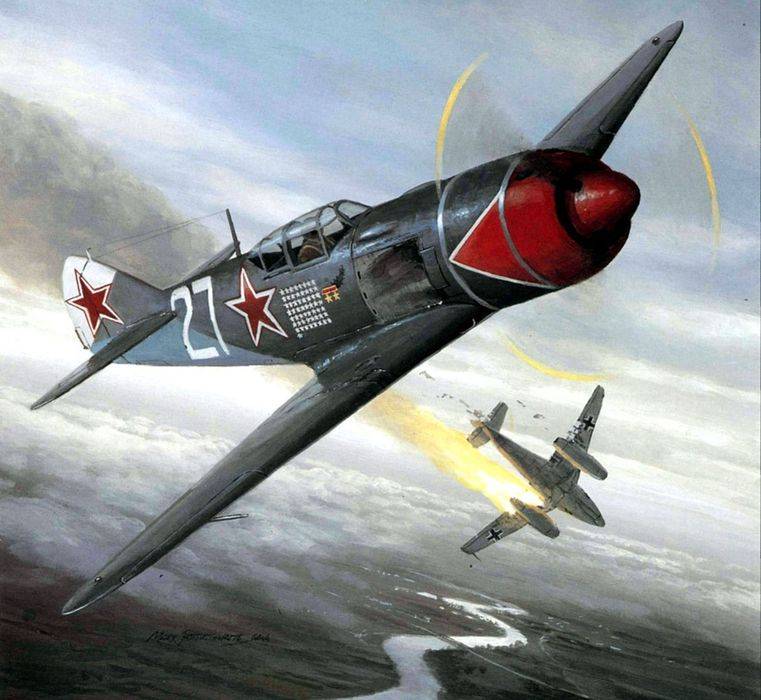 Ivan Kozhedub shot down a Me-262 fighter jet
Thanks to 64 air victories, Ivan Nikitovich Kozhedub became the most successful fighter pilot among all the pilots of the countries of the anti-Hitler coalition. But even this list is incomplete. It is believed that in the second half of April 1945, Ivan Kozhedub shot down two American P-51 Mustang fighters attacking him. Later, the pilot himself recalled this in his memoirs, and at the end of the war this episode of friendly fire was simply hushed up. A surviving American pilot noted that they attacked La-7 Kozhedub, mistaking him for the German Fw-190 fighter. Indeed, these two fighters in the confusion of aerial combat could be confused. At the same time, the American pilot was sincerely sure that it was the German who shot him down.