"I can not breathe!" Police arbitrariness and quarantine as reasons for revolution 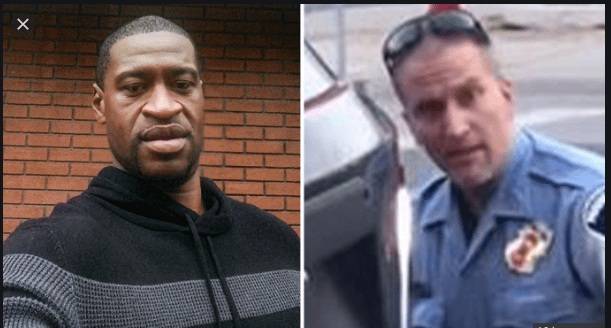 The police in the United States are known to have virtually unlimited power. The controversial actions of individual police officers are most often justified by the court. For example, a policeman comes to the playground and shoots a black teenager playing with a plastic gun. In court, the policeman is acquitted, and he continues to serve. Logically, everything is very simple: the Americans are the most armed nation, and no one could exclude that the young African American was really having fun with the fighting weapons. In order for a policeman to feel his impunity, several factors must converge. Firstly, the conflict situation develops in a poor quarter - this ensures the relative immunity of the police officer, since the local population does not have money for expensive lawyers. Secondly, the alleged offender must have a weapon or its imitation - in this case, a simple kitchen knife can also come down. Finally, the third condition is the racial identity of the victim. If it is Hispanic or Black, then the use of firearms by a police officer (subject to all three factors) a priori will be unpunished. And these are not empty words. 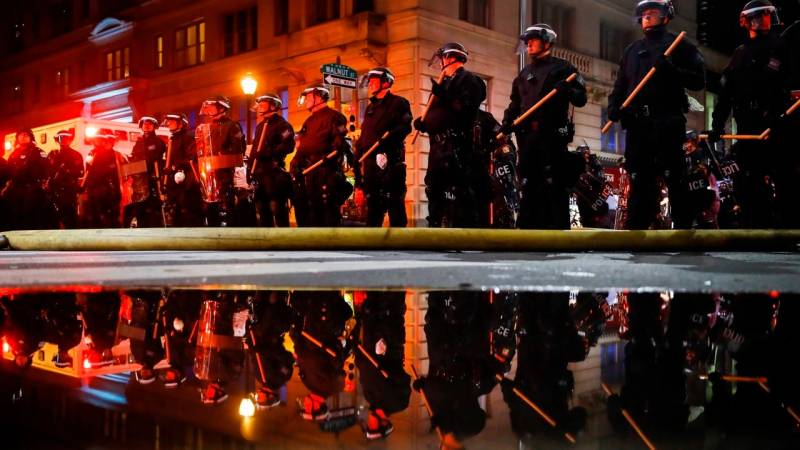 The US is emerging from self-isolation. Source: vk.com
On average, in the United States, police kill 2,8 people a day, while blacks get into this sad statistic much easier than Latin Americans and even less so white. On average, out of 100 detainees in the American police, 2,4 blacks, 1,2 Hispanics and a total of 0,7 people with white skin are killed. According to statistics, the risk of being shot by a black guard is a considerable 1 in 1000. Of course, stereotypes of American thinking play a big role. In their opinion, if an African-American, then necessarily from a poor quarter, unemployed, physically strong and aggressive. With such a conversation, a short - at best, tough detention, at worst - a bullet. In the future, no one will particularly deal with it: relatives usually do not have the means to exert legal pressure on the killers, and the special position of the caste of police officers often makes them infallible. 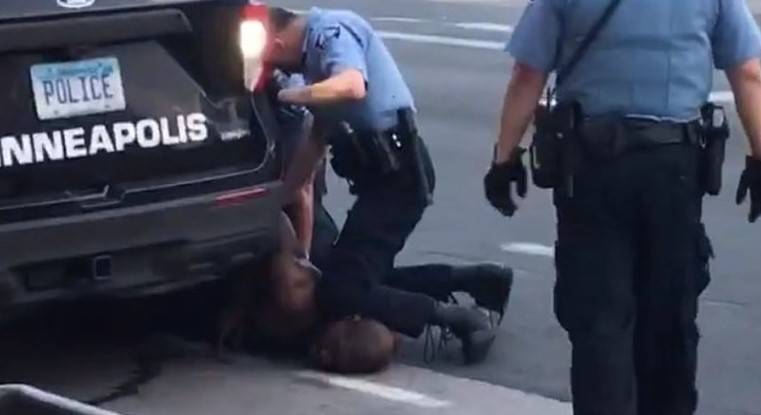 Eight minutes under the knee of a police officer. Source: vk.com
But with the detention of George Floyd in Minnesota, there was a problem. On May 25, at eight o’clock in the evening, a police outfit drove out to pacify the African American, who had previously been detained by a pair of law enforcement officers. Floyd himself and his friend were in a jeep and did not attract any special attention. At least on the surveillance cameras nothing reprehensible is visible. A version later appeared that George and a friend were trying to sell a fake $ 20 bill or check at a local store. First, an educational conversation was held with this couple, after which George was handcuffed to a police car. Floyd recklessly tried either to run away or to put up resistance, but was knocked down by three cops on asphalt. Nearby were passers-by, depicting how a police officer Derek Chauvin kept his knee on the detainee's neck for 8 minutes. Two more were literally sitting on the guy. Floyd himself is far from a petty guy, but from such treatment he lost consciousness and, obviously, died right there on the asphalt. Before his death, he begged to let go of his neck and moaned that he could not breathe. The black man’s death was ascertained already in the hospital, a video of police brutality hit the Internet, all four police officers were immediately fired. At the same time, Chauvin now faces up to 25 years in prison, the FBI itself conducts his case. And all because of the cell phones of caring passers-by, who captured all the stages - from resistance to death.

I must say that in the United States the police regularly and without any reason inspect and detain African-Americans, therefore, the fact that the guards pay close attention to Floyd’s Mercedes should not be particularly surprising. They just left the cafe and simply detained, albeit with suspicion of counterfeiting. As Eric Gardner, an illegal cigarette dealer and father of six children, was detained in 2014. They also decided to pacify him with a suffocating trick, but they did not calculate his strength and killed him. This was another occasion for a wave of violence. Later in the United States, both civilians and policemen died because of this. The protests later received as a slogan the last words of the unfortunate: "I can not breathe!" (I Can't Breathe).

Blame either Russian or COVID-19

The protests that currently swept almost the whole country seem to have gathered not only sympathetic fighters against racism, but also outright marauders under their banner. In the best traditions of the American riot, citizens together endure the contents of supermarkets and jewelry stores. The first victim just appeared because of such an invasion - the owner of the outlet, protecting the property, killed the robber. Not only Floyd's death, but the difficult economic situation of some Americans became the trigger for the mass disorder. Millions of them lost their jobs, and generous gifts from the state could not compensate for the loss of income. By the way, the deceased was also recently fired from the guards of a local cafe in connection with the pandemic and the crisis. Given that in the United States now the unemployment rate is about 20%, we can assume the full potential of modern protest. The riots in Ferguson six years ago seem like childish pranks compared to a wave of cruelty from people who have nothing to lose. 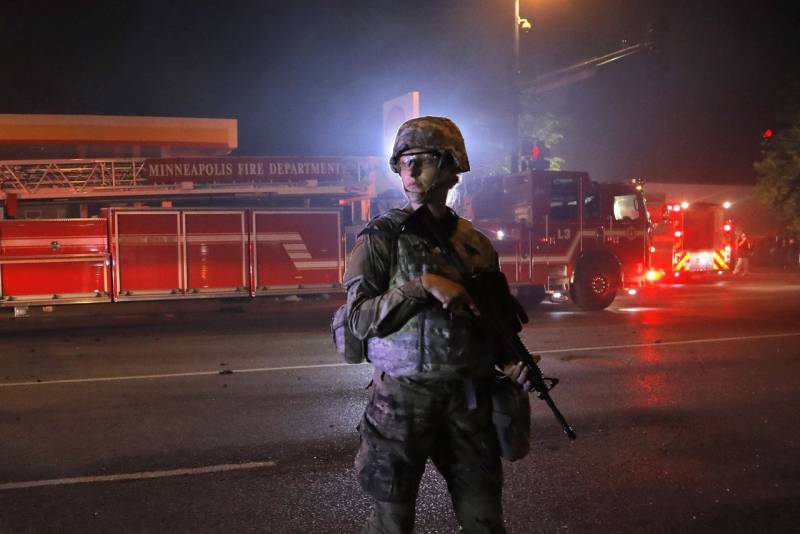 Source: vk.com
Any outside observer will be surprised at such large-scale acts of civil disobedience, which so far have not led to a change of power in the United States. Actually, the Americans are doing everything they want: they burn police stations, cars, rob, demand retaliation and the removal of Trump. It got to the point that the protesters blocked the White House and even drove the president into an underground shelter. Not for long, really. The leader of the country got out and immediately accused individual governors of excessive leniency to the protesters. “Judge and Imprison!” This is how one can briefly describe the president’s response to anti-racist protests, which have already killed 20 lives. There is no question of any recognition of the problem of racism in the police, in particular, and in the country in general. Protests, if they are not stopped now, threaten a full-scale civil war. Small arms have already begun to be used on the streets, which is abundant on both sides of the front.

In such a tense situation in the United States are initiative people from CNN, accusing Russia of supporting the protest movement. Allegedly, domestic special services intentionally heat up the situation in their interests. Obviously, another American stereotype played here: if there is a protest, then someone needs it. Usually in the world all anti-state performances are directly sponsored by the United States, but here the situation is the opposite. And the American establishment has already reflexively blamed the insidious Russians. And the protests, despite pandemic restrictions, meanwhile went beyond the United States: anti-racist actions have been held or are being prepared in London, Berlin and Sydney.

No matter how the protests end, one of their consequences will be a new wave of coronavirus infection. Americans, in their riot, celebrate an unauthorized exit from quarantine and overwhelmingly do not comply with any recommendations. Perhaps masks are worn only for fear of being identified. How it will cope with new thousands of infected countries engulfed in fire is not clear. 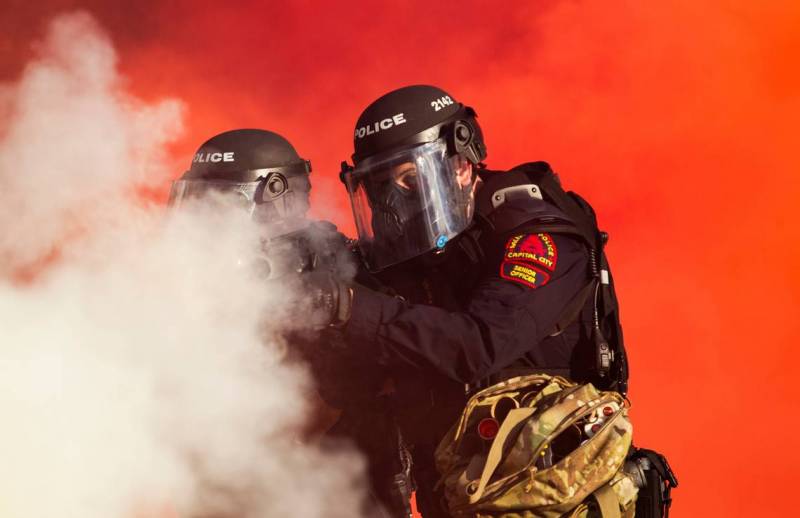 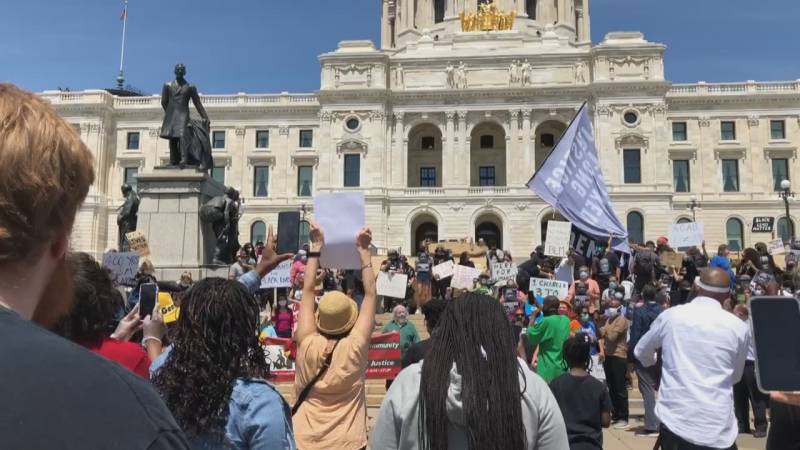 Source: vk.com
The situation with the death of an African American on May 25 and the consequences of this leads to thoughts about the intolerance of quarantine measures by the population. In fairness, he is not particularly respected: there are few masked people on the video from Floyd's detention, the streets are busy. But long-term stress, coupled with the economic downturn, can make the population of the "most democratic" country on the planet an angry crowd. It remains only to carve a spark from the deepest problem of American society - intolerance towards a person with a different skin color. And Officer Schoman seems to have succeeded.

Ctrl Enter
Noticed oshЫbku Highlight text and press. Ctrl + Enter
We are
The tragedy of the American army ("The Atlantic", USA)Situational analysis of the death of the MH17 flight (Malaysian Boeing 777), made on the basis of engineering analysis from 15.08.2014
Military Reviewin Yandex News
Military Reviewin Google News
153 comments
Information
Dear reader, to leave comments on the publication, you must to register.