Forever in the ranks. The Feat of Arkhip Osipov 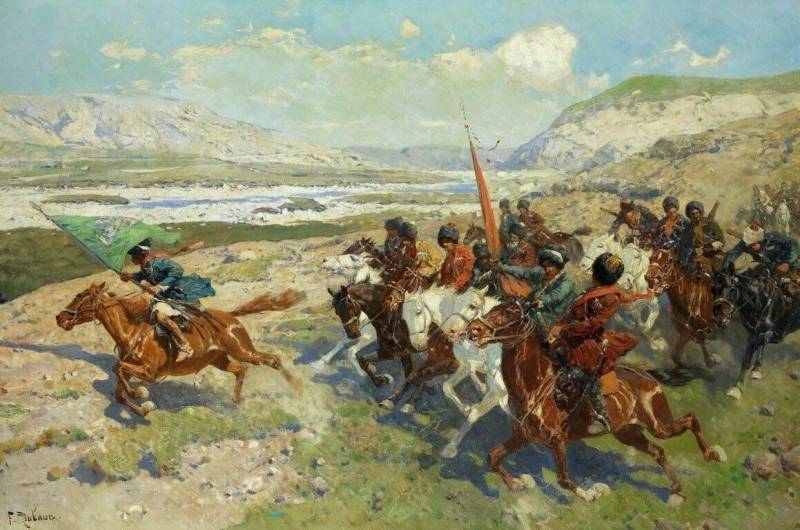 The Caucasian war, which lasted from 1817 to 1864, ended with the annexation of the mountainous regions of the North Caucasus to the Russian Empire. This was the period of the most fierce hostilities, including against the highlanders, united under the leadership of Shamil in the military-theocratic Islamic state - the North Caucasian imamat. At the same time, the military operations of Russia in the Caucasus were intertwined with the Russian-Persian (1826-1828) and Russian-Turkish (1828-1829) wars, which ended in the victory of the Russian weapons, as well as the Crimean War (1853-1856), which ended in the defeat of Russia.

The main areas of hostilities in the North Caucasus were two regions: the North-West Caucasus (Circassia) and the North-East Caucasus (Dagestan and Chechnya). His feat that immortalized his name in storiesArkhip Osipov made a private Tenginsky regiment in 1840 during the defense of the Mikhailovsky fortification, which is part of the Black Sea coastline, from attacks by superior forces of the Circassians.

Arkhip Osipovich Osipov was born in 1802 in the village of Kamenka, Lipovetsky district, Kiev province (since 1987, this is a separate residential microdistrict of the city of Lipovets, located in the Vinnitsa region).

The future illustrious soldier came from ordinary serfs. December 21, 1820 Arkhip was sent as a recruit to the army and in April of the following year he was enlisted in the Crimean Infantry Regiment. It is worth noting that at that time in the Russian Empire there was a recruit service, which lasted until 1874. Initially, the service life was life-long, but in 1793 it was reduced to 25 years and subsequently repeatedly decreased.

Already in the second year of service, Arkhip Osipov escaped from the army, which ended in failure. The fugitive recruit was caught and returned to the regiment, while the young soldier was sentenced through court to corporal punishment with gauntlets. The young recruit was to go through a system of 1000 people once, withstanding all the blows. After this incident, Osipov served regularly, with his entire service making amends to his misconduct of youth. Arkhip Osipov together with the Crimean regiment took part in the Russian-Persian war, distinguished himself during the capture of Sardar Abad, as well as in the Russian-Turkish war, taking part in the assault on the Kars fortress. 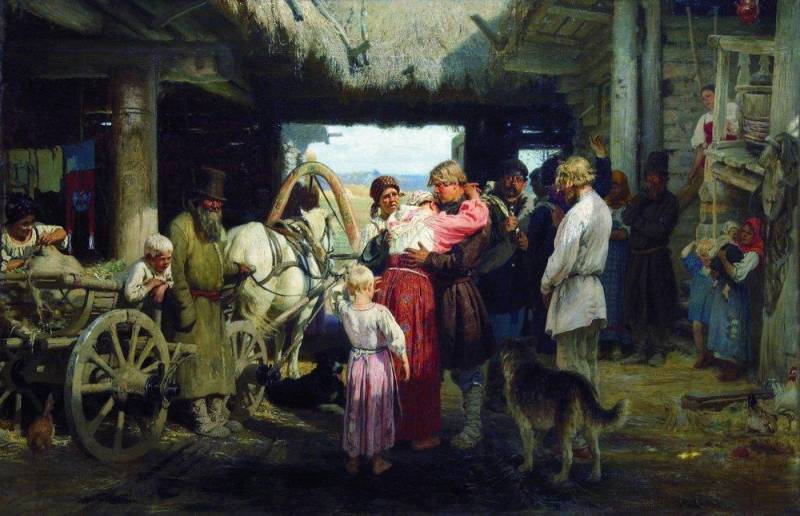 By 1840, the 38-year-old Arkhip Osipov was already an experienced soldier, seasoned in numerous battles and military campaigns. For the Russian-Persian and Russian-Turkish wars, he was awarded silver medals. According to testimonies of fellow soldiers who were personally acquainted with Osipov personally, the latter was a brave soldier and stood out for his tall stature. Dark brown hair framed his oblong face with gray eyes.

The Black Sea coastline, on which the Tenginsky Infantry Regiment, where Arkhip Osipov served, was a line of fortifications (forts, fortresses and shants) located along the eastern coast of the Black Sea from Anapa to the border with the Ottoman Empire. The main purpose of this chain of Russian fortifications along the coast was to prevent the supply of smuggled weapons, military supplies, food and other goods to the Circassians. First of all, such help went to the highlanders from the Ottoman Empire, and then Great Britain, who actively intervened in the affairs of the Russian Empire in the Caucasus. 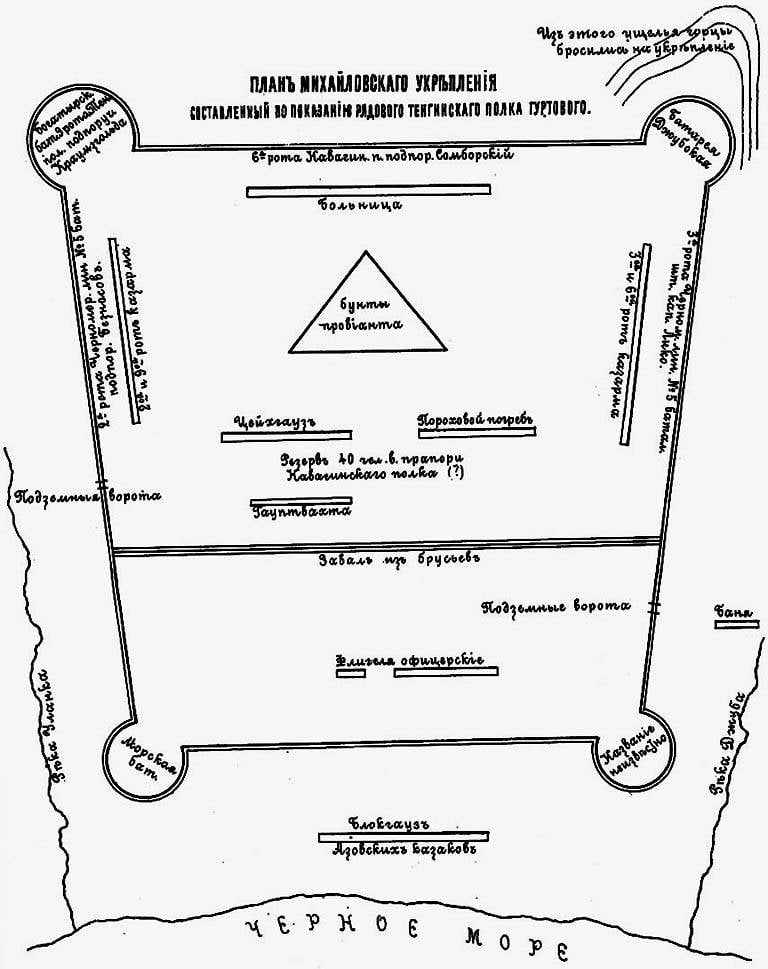 Plan of the Mikhailovsky Fortification
But the main problem of the entire coastline was not even the quality of the fortifications, but their filling. On defense of forts and fortresses was barely a tenth of the troops necessary for defense. Instead of 25 people, less than three thousand were available. At the same time, it quickly became clear that it was not the forts of the Black Sea coastline that threatened the highlanders, but the highlanders themselves could keep them in a state of constant blockade. The supply of fortifications with food and ammunition was difficult due to the lack of roads and was carried out by sea twice a year. Moreover, in addition to the insufficient number of garrisons and erroneous calculations during construction, which did not allow creating strong and durable fortification profiles, a huge problem was a large mortality from diseases. For example, for the whole of 980, 1845 defenders of fortifications died in battles with the highlanders, and 18 people died from various diseases.

The most terrible test for the Black Sea coastline was 1840, when the mountaineers carried out massive attacks against Russian fortifications, destroying and ruining some of them. The reason for the revitalization of the Circassian tribes was the terrible famine that erupted in the mountains in early 1840. It was the famine that forced the highlanders to develop a plan of attack on the fortifications in the coastal area, here the attackers planned to get hold of food, as well as various military equipment. On February 7, a one and a half thousand detachment of highlanders captured Lazarev Fort, which was desperately defending a garrison of 78 people, destroying the defenders. February 29, the fate of Fort Lazarev befell the Velyaminovskoye fortification located on the Tuapse River. And already in March 1840, the Circassians approached the Mikhailovsky fortification, in which Private Arkhip Osipov served.

For several days, especially at night, the mountaineers exhausted the garrison of the Russian fortification, simulating attacks. Such tactics weakened the garrison, which lived in anticipation of a constant attack. All these days, the soldiers and officers of the fort, if they slept, were only in full ammunition. At the same time, the forces were initially unequal, the fort garrison was approximately 250 people, and the attackers were several thousand, in some sources you can find information about 11 thousand highlanders.

The assault on the fort began early in the morning of March 22. Ahead was the Circassian infantry, which carried specially assembled wooden stairs to climb the earthen walls. Behind the infantry was the cavalry, which was supposed to fend off the sortie of the defenders of the Mikhailovsky fortification. Despite stubborn and desperate resistance, the forces of the parties were unequal. The mountaineers were not stopped by volleys of cards, but if they climbed the walls of the fortifications, sooner or later they would still prevail in hand-to-hand combat. The battle lasting several hours gradually faded. The surviving defenders of the fort were surrounded inside the fortification. At the same time, the commandant of the fort, staff captain Konstantin Liko, who had already been wounded by that time, refused to surrender to the enemy. 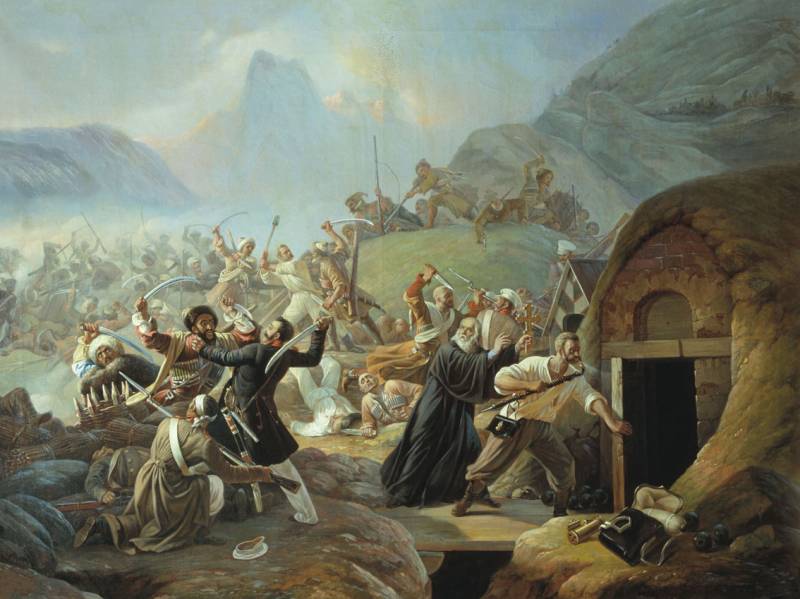 The feat of private Tenginsky regiment Arkhip Osipov. Painting by A. A. Kozlov
Arkhip Osipov said his word and last point in the defense of the Mikhailovsky fortification. After many hours of logging, the defenders' resistance faded, almost all of the fortification passed into the hands of the attackers. It was then that Osipov alone or with a group of comrades managed to break into the powder cellar and set fire to the powder. The terrible force of the explosion shook the air, a giant column of smoke and dust rose into the sky. From the Mikhailovsky fortification remained smoking ruins. The highlanders, struck by the incident, retreated and returned to the battlefield only a few hours later to pick up the remaining wounded and the bodies of the dead. At the same time, the explosion claimed the lives of the last defenders of the fortification and a huge number of attackers.

Paying tribute to the feat of a simple Russian soldier, Emperor Nicholas I ordered that Private Arkhip Osipov be included in the lists of the 1st company of the Tenginsky regiment forever. So a new tradition appeared in the Russian army: the inclusion of particularly distinguished soldiers and officers forever in the lists of units. And even later, already on the site of the destroyed ramparts of the Mikhailovsky fortification, a Russian village was founded, named after the brave hero - Arkhipo-Osipovka. Today, this village is part of the Krasnodar Territory.

Ctrl Enter
Noticed a mistake Highlight text and press. Ctrl + Enter
We are
Deserters in ChechnyaOssetian historians against Russian history. About the feat of the soldier Arkhip Osipov
68 comments
Information
Dear reader, to leave comments on the publication, you must to register.