The weak does not give up, the strong wants to put up. Features of the intervention in Yemen 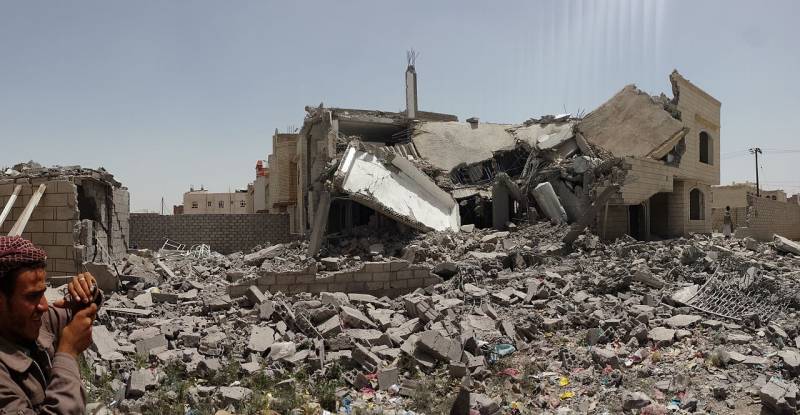 One of the districts of the city of Sana'a, damaged during the fighting, 2015. Photo by Wikimedia Commons

Since February 2015, troops of several countries of the coalition led by Saudi Arabia have been fighting in the territory of independent Yemen. The Arab coalition and a part of the Yemeni army loyal to it confronts the large militarized group Ansar Allah (its fighters are known by the common nickname Husits), part of the armed forces of Yemen and small formations. The official goal is to restore legitimate authority.

The fighting continued with varying success since the beginning of 2015, but the tasks were never resolved. The interventionists won several notable victories, but each successful battle had its own setbacks. As a result, despite the continuation of battles in different regions of Yemen, the general situation is far from the complete victory of one of the parties.

On April 8, 2020, the Arab coalition announced a two-week truce. The reason for the cessation of fighting called the current epidemic COVID-19. On April 25, the coalition extended the truce. At the request of the UN, hostilities will not resume for a few more weeks. This decision is explained by the desire "to alleviate the suffering of the fraternal Yemeni people" and to prevent the spread of infection in the holy month of Ramadan.

However, the fire did not stop, and various skirmishes still continue. In addition, new full-blown strikes took place. Whether the parties will be able to agree on a real cessation of hostilities is a big question.

Given the activities of the coalition for all the years of the operation, it is difficult to suspect Riyadh of being kind to the "fraternal people of Yemen." In solving their military-political problems, the Arabian and other armies did not embarrass themselves in methods or in choosing targets for strikes. In fact, in a few years, a significant part of the civilian infrastructure was destroyed, which led to known fatal consequences for the population.

Houthis Promising Arms Exhibition, 2019 Iranian designs are widely represented. Photo Imp-navigator.livejournal.com
Despite all efforts and the most brutal measures, the main task of the operation has not yet been resolved. The coalition was not able to defeat the Hussites in five years and probably will never cope with them. At the same time, the Arab armies continue to spend money, as well as lose people and equipment. And recent events in the energy market and the decline in income of the "oil powers" of the Middle East are becoming an additional threat to their interests.

Given all this, it can be assumed that Saudi Arabia declared a “viral truce” in connection with the desire to get out of the expensive and useless conflict, but at the same time “save face” as much as possible. Other members of the coalition, experiencing similar problems, may come out of Riyadh from the war.

Army against the militia

Probably, the command of the Arab coalition initially did not see any threats to itself in the Yemeni intervention. For 2014-15. the rebels of Ansar Allah were a fairly large, but not too well armed and trained force. The maximum number of Hussites, according to various estimates, did not exceed 150-200 thousand people, collected mainly in infantry detachments.

By 2015, a part of the armed forces of Yemen crossed the side of the rebels, due to which the militia was strengthened by significant quantities of equipment, including armored, weapons, etc. Also, the materiel was able to beat off in battles with the loyalists, but even after that the Ansar Allah squads looked a little like the modern army. However, the Hussites managed to take control of the country's capital, Sana'a.

Saudi tank M1A2S Abrams and BREM M88A1, which became the Hussite trophies in September 2015. Photo by Lostarmour.info
According to various reports, almost from the very beginning of the fighting - even before the coalition arrived - the Iranian structures and Hezbollah helped the Hussites. They supplied the allies with weapons and equipment, ammunition and medicines, and also sent military advisers, supplied intelligence, etc. However, officially both Iran and Hezbollah deny their involvement in the conflict.

Since the beginning of 2015, the coalition sent a rather large contingent to Yemen, represented by various branches of the armed forces. At different times, the group included up to 150-170 thousand troops from different countries. They had hundreds of land combat vehicles, artillery, aviation etc. In separate operations, ships of the naval forces were used.

The coalition had every reason to consider the outcome of the intervention predetermined. Several armies gathered a large interspecific group with modern equipment, which was opposed by hastily trained rebels. However, such forecasts did not materialize, and no easy walk came out. Quickly enough, it became clear that the Hussites with alleged foreign support were able to withstand not only the weak Yemeni army, but also the foreign coalition.

According to the interventionists, over the course of five years of fighting, several tens of thousands of rebels were destroyed, but it is not entirely clear how true this information is. Human losses of the coalition can reach 5-7 thousand people, however, official data and estimates on this subject are very different.

So far, a whole tank Leclerc UAE army. This car was destroyed on January 23, 2017. Photo by Lostarmour.info
The situation with armored vehicles looks very interesting. Fighting vehicles of different classes repeatedly changed owners or died on the battlefield. In addition, it is customary for the Hussites to destroy some trophy specimens exponentially - to improve their image and damage the enemy’s reputation.

Prior to the intervention, the Yemeni army had approximately 450 tanks T-54/55, 200 with newer T-62s and several hundred other vehicles, from T-34-85 to M60A1 and T-80BV. There were samples of all other classes. During the fighting, hundreds of tanks and other military vehicles changed owners and became the property of Ansar Allah.

The Lost Armor database reports that in five years of fighting, all parties to the conflict lost more than 290 tanks of various types. More than a third of this number falls on the technique of loyalists from the Yemeni army. A similar amount of equipment was lost by the Hussite rebels. OK. 50 tanks lost the army of Saudi Arabia. Enemy tanks were destroyed by all available means, from mines to aircraft.

If in the case of the army and rebels of Yemen, the most part of the losses were obsolete T-54/55, then the interventionists suffered more annoying losses. The Saudi army was left without 15-20 main tanks M1A2S Abrams. Since 2015, the United Arab Emirates Army has lost three Leclerc tanks. 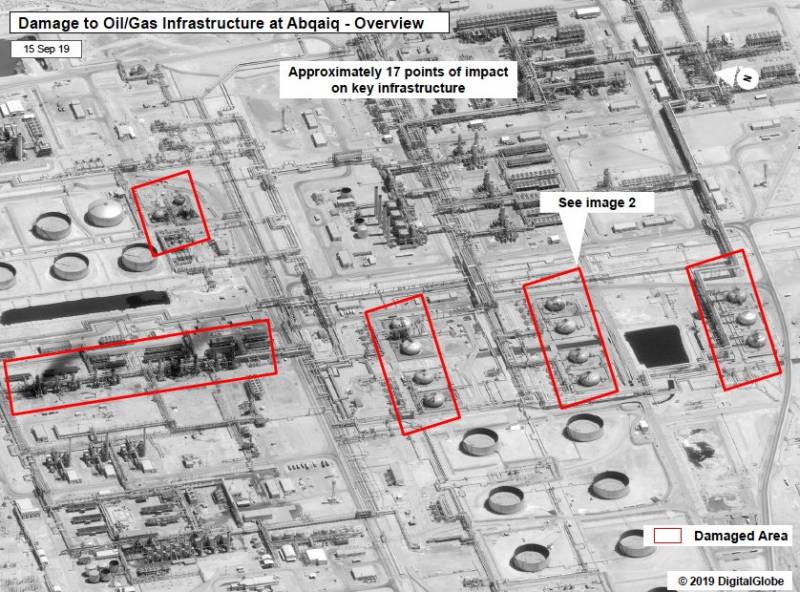 Results of Yemeni UAV raid on Saudi Aramco objects at Abkaik field, September 14, 2019. Satellite image of Digital Globe
It is also necessary to note the notable losses of the coalition in other ground equipment, aircraft, helicopters, UAVs, weapons, etc. Particularly interesting are several incidents involving the defeat and destruction of warships and auxiliary vessels. The “poor and poorly trained” Hussites even coped with such goals.

Moreover, not without the support of third countries, Ansar Allah regularly conducts rocket attacks on remote targets, including in the territory of enemy countries. Of particular interest is the attack of September 14, 2019, when the Hussite UAVs attacked Saudi Aramco's oil infrastructure facilities in Arabian territory. This operation showed the potential of the Hussites, and also hit the enemy’s economy.

Having certain information about the main events of the current war, one can understand why the Arab coalition, at least, cannot defeat the Yemenite Hussites, and in some cases is defeated. These phenomena can be found several explanations affecting both sides of the conflict.

The strength of coalition armies is the presence of modern foreign materiel and support from developed states. At the same time, weapons do not always meet current challenges, and its operators cannot boast of good training and skills. This leads to excessive losses when ambushed, to the inability to repel a UAV attack, etc. 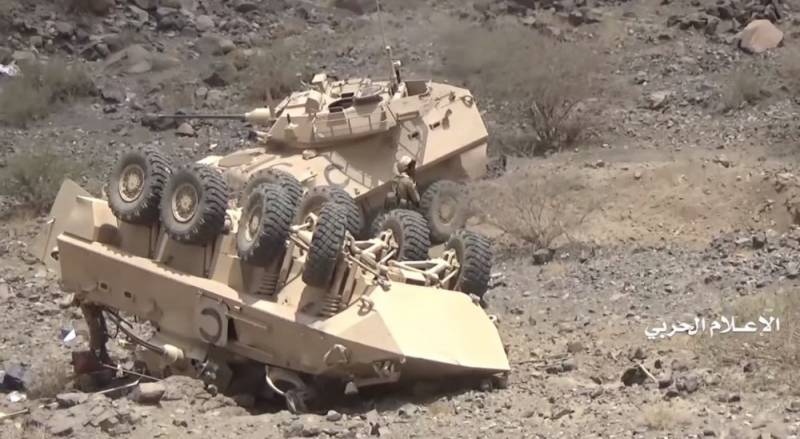 The results of the Hussite attack on a coalition column near the Saudi-Yemeni border, September 2019. A lot of other broken equipment remained behind the scenes. Photo Imp-navigator.livejournal.com
The Ansar Allah units are lagging behind in terms of equipment, and even supplies from third countries cannot fundamentally change the situation. At the same time, the Hussites are well aware of the area and enjoy the support of the population. They also learn quickly, take into account the mistakes of the enemy and actively use the help of military advisers. As practice has shown, it is extremely difficult to combat such a force.

On the threshold of peace?

Over the past five years, the Arab coalition has spent tremendous amounts on the war in Yemen. Losses of personnel, weapons and other equipment continue. The risk of new enemy attacks on critical objects remains. At the same time, the military-political tasks set have not been solved - and the possibility of their solution is doubtful. Amid all this, the "oil powers" are suffering losses due to falling prices for their main commodity.

The coalition is directly interested in ending useless battles, leading to senseless losses and unjustified risks. The April armistice, announced for two weeks, and then extended for another month, could be the first step out of the war. However, now Riyadh and its allies need to convince the Hussites from Sana'a to sit at the negotiating table and determine the conditions for ending the war and the post-war structure.

So far, none of the belligerents has been able to completely solve all their tasks, and the enemy is directly preventing the obtaining of the desired results. However, practice has already shown that even poorly equipped Hussites are quite capable of defeating the well-armed armies of the interventionists. The latter should take this into account - and draw the right conclusions, providing for the withdrawal from Yemen and the cessation of fighting. Only this will protect them from new losses, as well as provide real help to the "fraternal people."

Ctrl Enter
Noticed a mistake Highlight text and press. Ctrl + Enter
We are
Iran in the Syrian conflict. The confrontation with Saudi Arabia and the interests of the ShiitesYemen war. Russia's interest - the weakening of the Saudis
29 comments
Information
Dear reader, to leave comments on the publication, you must to register.