Birds over Moscow. Spy Animals at the CIA 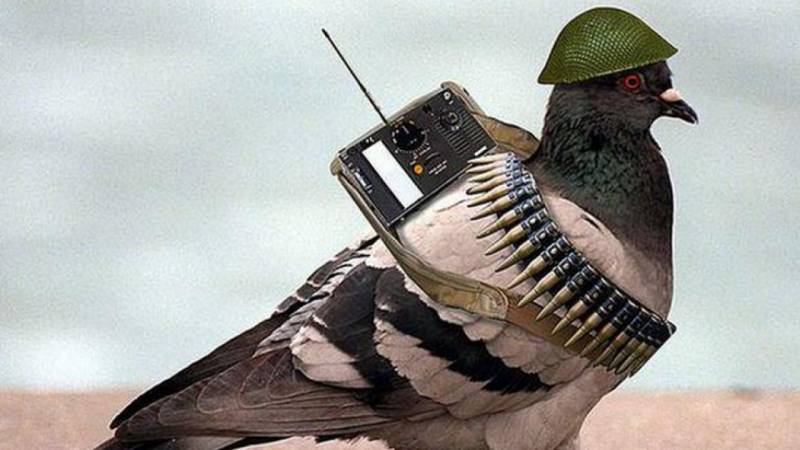 “Animal Partners” - this is the name of the CIA program for the use of animals for intelligence purposes. This became especially true after the destruction in 1960 in the sky above Sverdlovsk of the winged spy U-2. Before the era of satellite intelligence was still far away, so the solution was found in the use of avifauna. This has become one of the areas of work for the Animal Partners project. Now it’s quite difficult to talk about the effectiveness of American espionage endeavors, but the CIA decided to declassify the project only in September last year. 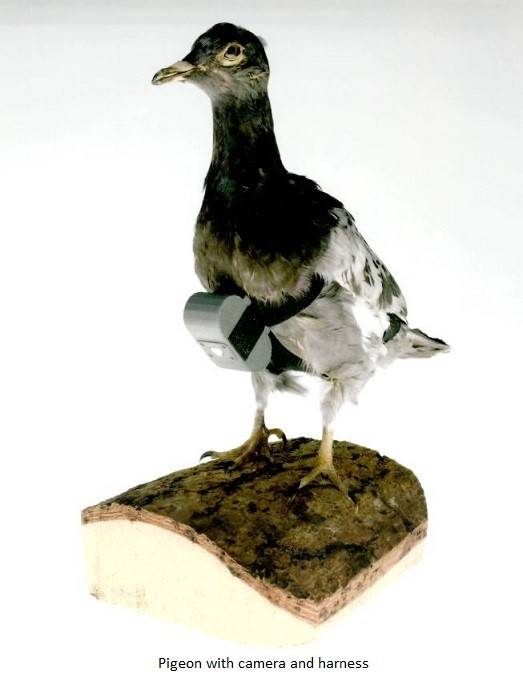 Spy pigeon in battle vestment. The CIA Museum in Langley. Source: cia.gov
Birds could be used not only as carriers of photo and video recording equipment, but also as living bio-indicators. Thus, US intelligence hoped to get into the hands of pigeons and other birds that migrate seasonally to the area of ​​the Saratov training ground in Shihan. Here, according to the Americans, the Russians tested the chemical weapons and all living creatures nearby had to bear the traces of it. It only remained to catch the birds that had flown away for the winter from Shihan and take detailed biochemistry analyzes. By such indirect indicators, it was theoretically possible to judge the features of chemical weapons tests in the USSR. Whether the CIA planned to expose the leadership of the Soviet Union, if successful, is unknown, but it is unlikely that someone in their right mind could accept as evidence the presence of traces of sarin or other OM in pigeon droppings or blood.

The second case in the Animal Partners portfolio was the Tacana project, designed to use birds as live reconnaissance drones. Closed to prying eyes, the museum in Langley stores samples of miniature cameras that were mounted on pigeons and other winged animals. I must say, the Americans did their best - the 200-frame cameras weighed only 35 g, and the flight of the bird was not particularly hindered. They cost about 2 thousand dollars. The developers focused primarily on pigeons, as they are one of the few who found their way home from the most remote places. One of the main objects of observation should have been Moscow and Leningrad - important and most important large-scale objects, saturated with interesting objects for the CIA. The Americans obtained a part of the project’s achievements from the UK, whose intelligence services during the Second World War actively used pigeons to communicate with intelligence on the other side of the English Channel. The first Tacana experiments were conducted in the USA in the vicinity of Washington and were not particularly successful. Even for the multi-million dollar budget of the program, this turned out to be wasteful - some of the birds disappeared without a trace or returned without expensive equipment. The developers, obviously, did not take into account that the pigeon burdened by the camera, although it does not lose its ability to fly, is dodging predators somewhat worse. As a result, hawks quite successfully attacked part of the experimental birds, forever taking away valuable equipment from the CIA. Sometimes in this counterintelligence role an ordinary cat could play. 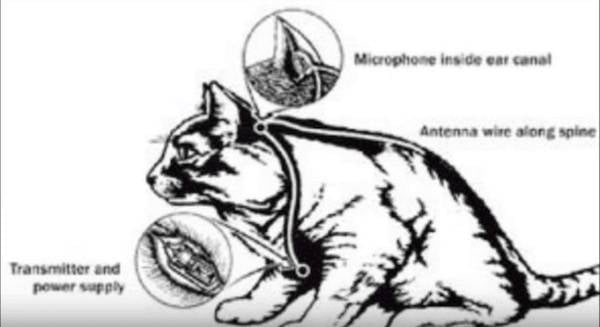 Layout of special equipment inside the cat and outside. Project Acoustic Kitty. Source: en.wikipedia.org
Speaking of cats. Even before the declassification of Animal Partners, the media in 2001 became aware of the CIA's work on the Acoustic Kitty project. The essence of the work is to use a cat as a carrier of listening and relaying equipment. For this, a microphone, a transmitter and a thin antenna laid along the spine were implanted into the ear canals and the skull of the unfortunate animal. Such a “modified” cat had no unmasking signs and could quietly eavesdrop on secret conversations. However, the problem was the intractability of the equipment carrier itself - the cat was constantly distracted and retreated from the original plan of the operation. They say that even during the “performance of official duties” one of them even shot down a car to death. Be that as it may, feline trained poorly at training, and the dubious project was closed in 1967, wasting several million dollars.

But back to the spy pigeons. The second reason the CIA was skeptical of the results was the possibility of valuable intelligence equipment falling into the hands of KGB officers. It was enough for such a pigeon to walk in front of caring townspeople so that the whole plan of the operation was revealed. During training in the sky over Washington, it turned out that half of the pictures that the equipment took were of quite acceptable quality and were much better than satellite ones. As a result, the CIA decided to take a chance and in 1976 they issued a test espionage operation in the USSR. It was supposed to let pigeon spies out from under his coat, through a special hole in the floor of ambassadorial cars, and even while the car was moving through the window. One of the goals was the shipyards of Leningrad. There should have been live reconnaissance drones in the sky of Moscow. About whether this was actually carried out, история silent: declassified documents break off at the most interesting place.

Artificial intelligence bird of the Project Aquiline program. Source: ainonline.com
According to the Tacana project, it is also known about attracting ravens as suppliers of listening equipment, for example, to the windowsill of an object of observation. There is information that the Americans even managed to throw bugs in such a way somewhere in Europe a couple of times, however, in an experimental manner. Owls, cockatoos, vultures and hawks have also been tried at different times for the role of winged scouts in the CIA. The real apotheosis of ornithological intelligence in the United States was Project Aquiline. Under this name is the development of an experimental winged drone disguised as an eagle, capable of flying deep into the territory of the USSR and returning with a detailed photo report. They created a flying scarecrow, it even flew, but the management problem was not solved, which led to the premature closure of the topic.

In addition to the above partner animals, US intelligence also tried to attract dogs. Everything with training was much easier here, so the CIA decided to learn how to control animals from a distance. To do this, control electrodes with transmitters and receivers were implanted into the animal’s brain. Some of the information in this area is still not fully declassified by the Americans, so there is no reason to talk about the closure of the project or effectiveness. 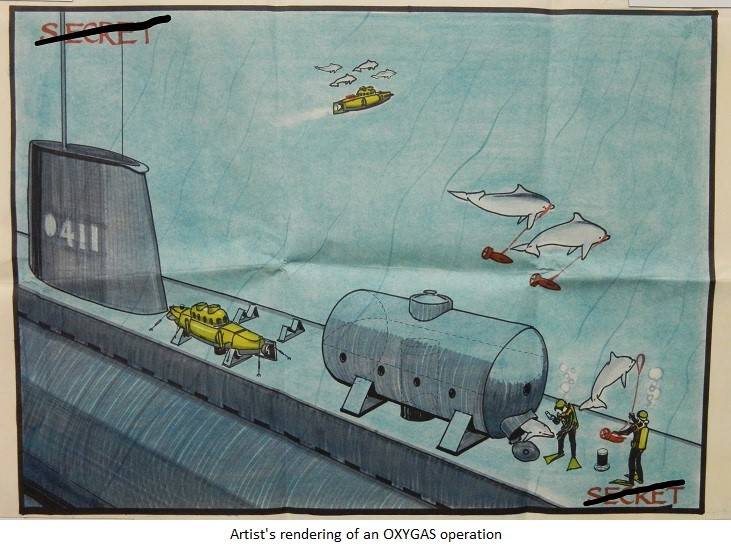 Illustration of the principle of working with dolphins. Source: cia.gov
But the CIA worked with dolphins quite actively, although to no avail. These amazingly intelligent marine mammals readily responded to the requests of Americans. The scouts asked about installing listening equipment on enemy submarines and escorting Soviet naval convoys with a detailed record of the noise signatures of ships and submarines. Dolphin-mounted sensors could detect radioactive radiation from ships and even the effects of biological weapons tests. It was hoped that the dolphins would be equipped with small-sized mines for hidden installation on ships, and sometimes a banal suicide bombing. Dolphins could act in a seemingly innocuous role of a hidden vehicle for small loads. For example, animals were taught to transport valuable documents from the coast to ships remote at sea. “Oxygas” and “Chirilogy” - these were the names of dolphin programs (based in Florida, Key West), which also ended in nothing for the CIA. The percentage of successfully completed marine animals tasks was too small to speak of success. However, the US Navy is still actively working with dolphins. 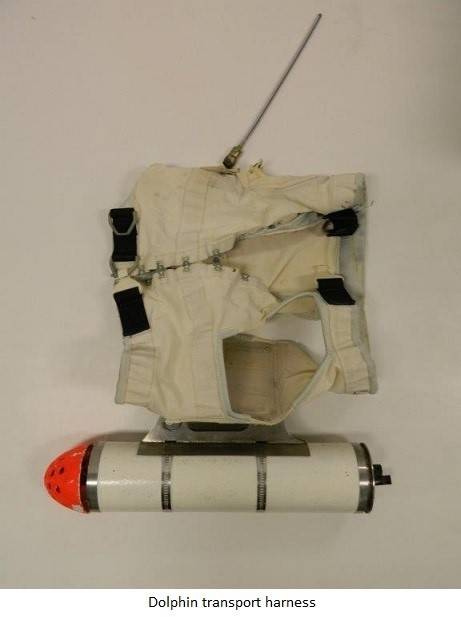 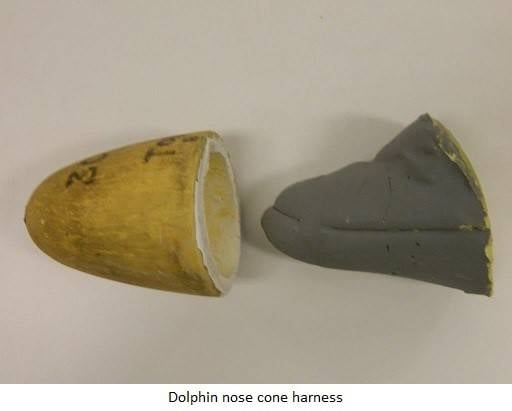 Outfit for dolphins. Source: cia.gov
The fact that the topic of using marine animals as scouts is alive not only in the United States, says the latest find of Norwegian fishermen. On April 25, a beluga whale swam up to them, apparently in search of food, on which was a belt for equipping the animal with some specific equipment such as a GoPro camera. So, at least, the Norwegian side declares. They also mention a label that says: “Equipment of St. Petersburg "(" Equipment of St. Petersburg "), which" unambiguously "speaks of Russian provocation off the coast of Norway. In general, it remains only to be sure to leave a feedback phone.

Ctrl Enter
Noticed a mistake Highlight text and press. Ctrl + Enter
We are
"Vitya Cherevichkin lived in Rostov ...": Rostovites still remember the young heroMilitary pigeon connection in the Red Army on the eve and during the Great Patriotic War
37 comments
Information
Dear reader, to leave comments on the publication, you must to register.