Slavyansk and Kramatorsk: the beginning of a strange war 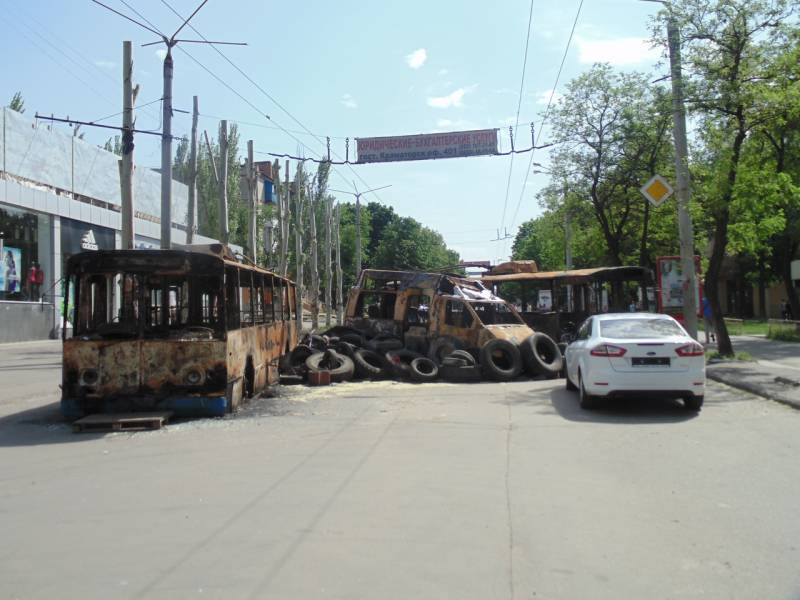 To be honest, all these conspiracy theories were already tired of it, especially since Igor Girkin himself and many of his associates subsequently repeatedly changed their opinions and their testimonies of what was happening. Let's agree that we do not know how and why Girkin and his detachment ended up in Slavyansk, simultaneously taking command over the Druzhkovka garrison.

As well as it makes no sense to discuss theories about exactly what the exit from Slavyansk and Kramatorsk was - the so-called “Kutuzov maneuver”, the “agreement” with the Ukrainian side, or simply Strelkov’s nerves lost, in connection with which he planned to urgently leave DNR to the most snowy.

The author can only cite his own observations and memories of those times, which are to some extent much more valuable than the politically biased statements of the direct participants or the endless conspiracy theories of those who were not close to Slavyansk or Kramatorsk after April 2014.

After the first spirit-raising and victorious battles and cases of peaceful “expense” with conscript soldiers (some of which went over to the militia side), the situation began to change not for the better. APU reliably dug in at the prevailing height of Mount Karachun, from where at any moment they could wipe almost any object in Slavyansk and Kramatorsk from the face of the earth (even the headquarters of Kramatorsk could easily be erased into powder); they occupied the Kramatorsk airfield, from where they regularly made sorties into the city.

What exactly prevented the APU from entering the cities is difficult to say, but certainly not the bragging of couch analysts about how the militia would burn armored vehicles in urban areas. There was nothing to burn, alas. The captured RPGs most often did not work, which Strelkov himself complained about. In May-June 2014, even the anti-tank gun of the Second World War or the post-war SKS carbine were in price. Weapons there were extremely few. Like trained people. Against the background of really literate or simply desperately brave and quick-witted fighters and commanders, individual characters stood out for their "abilities." In principle, then to demolish all our resistance was not difficult. Why this was not done remains a mystery.

Voice in the wilderness

Since the end of May, Strelkov’s panic reports on the lack of weapons and the imminent death of all the defenders of Slavyansk and Kramatorsk were desperately getting on their nerves. Firstly, they went through official channels and scared great both ordinary soldiers (who already often panicked due to carelessness of command) and the loyal population. Especially all this began to get on the nerves at the moment when the supply was more or less adjusted, and it was not only about small arms.

At night, one could hear caravans of machinery rattling through locals along sloping steppe roads to Slavyansk. By the way, a curious moment: Igor Girkin himself repeatedly complained about the lack of equipment and the fact that he had to fight with one single “Nona”. However, several armored groups came out, one of which was actually destroyed under the Stella.

Also, according to the testimony of the former Deputy Minister of Defense of the DPR, Sergei Velikorodny, who was defending Semyonovka, before he immediately left Slavyansk in the “headquarters”, where he came to get the latest instructions before leaving, he saw a considerable amount of weapons, including grenade launchers, about which so many times to no avail requested the command.

All to the exit

Surely something strange was going on at the headquarters, but the most “fun” began on the night of leaving Slavyansk and Kramatorsk, which the author met near the Kramatorsk airfield. Suddenly, the group was removed from its position and sent under Druzhkovka, where it was ordered to stop, up to power methods, any freight transport that would move to or from the city. A few hours later, the Kramatorsk headquarters stopped communicating, but a convoy appeared with personnel, fuel trucks, etc., which rolled several times in different directions, probably looking for the safest road to Donetsk (?). Fortunately, they did not open fire on the column.

It soon became clear that the entire headquarters safely removed and left Kramatorsk, leaving behind a lot of interesting documents, among which were lists of loyal citizens, participants in the organization of the referendum, etc. For many, this cost freedom. By morning, up to a thousand fighters of the Slavic and Kramatorsk garrisons gathered in the central square. Once again, I was struck by the thought: what were all the measures of secrecy, if then people were just so easily gathered in an open place? And why did the APU not take advantage of the situation and cover us with fire? The riddle.

The significance of Slavyansk is difficult to overestimate, however, according to the author’s sincere, although unpopular, opinion, this value is purely symbolic. In terms of strategy or tactics, Girkin’s escapade did not bring much benefit. Yes, and in a few weeks the battles began such that, in comparison with them, the entire Slavic epic was clearly losing in scale.

However, thanks largely to Girkin himself, to Babai and the professional work of the Russian military commanders, the defense of Slavyansk became a symbol of the “Russian spring” and attracted world attention to the Donbass, which provided the militia with a constant influx of volunteers and comprehensive assistance, without which most of the DPR and LPR advocates were unlikely to survive would be the summer of 2014.

We are in Yandex Zen
About Stalin and Khrushchev
What you didn't want to know about England
278 comments
Information
Dear reader, to leave comments on the publication, you must to register.