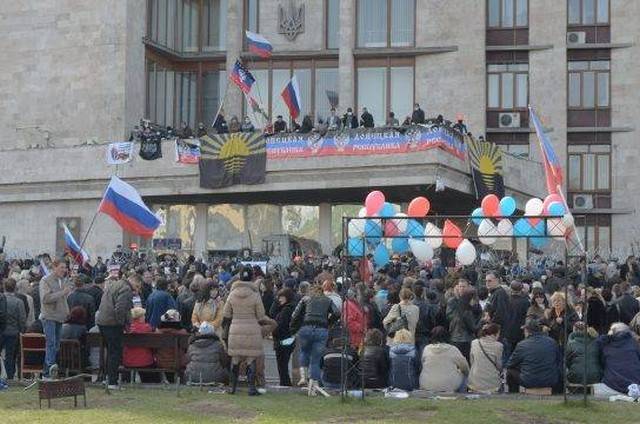 April 6 is a significant date in the newest stories Donbass. On this day, as if obeying a team of unknown coordinators (most likely, it was), activists in Lugansk and Donetsk seized the buildings of the regional state administration and SBU.

In Donetsk, the RSA was not captured for the first or even the second time. Before that, people broke into the session hall, demanded that deputies vote for a referendum on the status of Donbass, they even spent the night there, but they left the building over and over, supposedly in connection with the administration's mining, or simply not understanding why they should be there.

This time everything was much more serious - the people walked purposefully. Probably, the protest coordinators realized that it was time to go all-in, otherwise it would be the same as in other areas: the secret services would arrest the leaders one by one, and the inhabitants would simply be dispersed. Law enforcers practically did not prevent the seizure of government buildings, and in Lugansk, as if by prior arrangement, they were brought from all the cities and regions of the region weapon and ammunition. For comparison: in Donetsk SBU, according to participants in the events, they managed to get hold of only wooden dummies of machine guns.

It is not known why law enforcement officers didn’t recapture the captured objects (the languid attempts of nationalists in Donetsk do not count), but on April 7, a few days before Strelkov-Girkin and his people appeared on the stage, Acting Head of the Verkhovna Rada Alexander Turchinov announced his readiness to use anti-terrorism measures against protesters. It seems that bloodshed could not be avoided regardless of the appearance of Girkin in Slavyansk, in connection with which his statement that it was he who “started the war in the Donbass” seems somewhat self-confident. A war would have taken place anyway.

Kiev was at hand. At least in order to distract the attention of Ukrainians from the lost Crimea, it was urgently necessary to defeat someone. Why not pro-Russian citizens in the Donbass who did not hide their desire to join Russia according to the Crimean scenario? In those days, Kiev was probably able to cope with the protest in the Donbass through diplomacy, promises, or special force operations. Instead, troops and armored vehicles were thrown against people still quite peacefully disposed. The reaction of the inhabitants of Donbass, especially after the first deaths at the hands of the Ukrainian military, was quite adequate - the population immediately organized themselves into the militia, and there were several orders of magnitude more people who wanted to join its ranks than small arms.

Farewell to the Slavic

Having adopted a declaration of sovereignty on April 7, 2014 and securing it in a referendum on May 12, Lugansk and Donetsk challenged Kiev, to which it responded with the full power of its military machine, wiping entire villages off the face of the earth and massively destroying recent compatriots. The bifurcation point was passed: the very idea of ​​the return of Donbass to Ukraine lives only in the Minsk agreements that are not respected and the panic fears of the guard patriots.

Today, six years later, there are still those who are wondering: was it worth it? Probably, here everyone should decide independently, but the author is sure: despite all the losses, to the detriment of industry and the economy, to all the turmoil and problems of the transition period, all these victims are justified. Because we and our children will speak our own language, go to our church, and no one will impose the notorious European values, fascism, nationalism or demshizu on Donbass.

Because, albeit slowly, albeit not immediately, but the Donbass will become part of Russia. Its population is already receiving Russian passports, and sooner or later the day will come when the Ukrainian passport in Lugansk or Donetsk will become a curiosity. Because after everything experienced, after all the atrocities of Kiev, which continue even today, looking at the compromising position of the Ukrainians, it becomes quite obvious that Donbass and Ukraine were never close, so this divorce, no matter how painful it may be, is inevitable and correct decision.

Ctrl Enter
Noticed a mistake Highlight text and press. Ctrl + Enter
We are
Situational analysis of the death of the MH17 flight (Malaysian Boeing 777), made on the basis of engineering analysis from 15.08.2014Results of the week. "God forbid to see Russian revolt, senseless and merciless!"
109 comments
Information
Dear reader, to leave comments on the publication, you must to register.