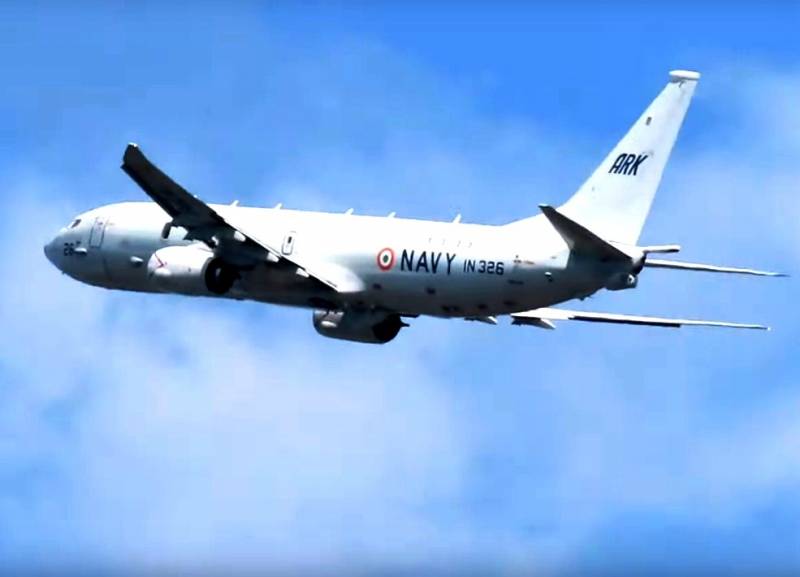 
We are talking about an improved multipurpose marine aircraft P8I, which is designed to patrol the entrusted territory, to identify enemy objects under water and take measures to destroy them. The Poseidon P-8 aircraft was developed by the American company Boeing on the basis of the Boeing -737-800ERX airliner for the needs of the US Navy aviation. The first flight of the aircraft was carried out in 2009. At the same time, India announced its desire to purchase a similar aircraft for the needs of its naval aviation.

To meet the needs of the Indian Navy, a special P-8I Neptune model was created, into which some systems developed and manufactured in India were integrated. The main task facing the manufacturer was to adapt the model of the aircraft for operation in the tropical climate of India. The company successfully coped with this task. As a result, the P-8I Neptune became one of the world's best naval patrol aircraft, capable of performing anti-submarine warfare tasks.

Given that India pays special attention to building up its naval capabilities to confront the main rivals in the region - Pakistan and China, the need to create and adopt a special anti-submarine aircraft seemed justified. Moreover, the discovery of submarines is not an easy task, implying the need for a raid of thousands of hours while patrolling a large territory and determining the noise coming from a submarine, against the background of a general increase in noise at sea due to an increase in cargo traffic.

Indian military experts believed that Indian Navy aviation needed a modern and effective alternative to the aging Tu-142 and Il-38 aircraft, which were formerly part of Indian naval aviation. Recall that the Tu-142MK-E in the amount of 8 pieces was adopted by the Indian Navy in 1988. He participated in many military operations, including Operation Cactus in the Maldives and operations on the border with Pakistan, until March 29, 2017, was withdrawn from service. At the same time, Admiral Sunil Lanba, Chief of Staff of the Indian Navy, noted the great contribution of these aircraft to the country's defense capability.

Interestingly, an airplane flying at a low altitude and for a long period of time can operate at a higher altitude. It is perfect for patrolling India’s vast coastline of 7516,6 km.

A radar specially designed to work with marine and coastal areas is installed on board the aircraft. Also, the aircraft can carry out ground surveillance. The incoming images have high resolution, in addition, the operator can choose the functions SAR (synthetic aperture radar) and ISAR (synthetic aperture inversion radar). The aircraft also has equipment for detecting thermal signatures.

Exceptional opportunities for the aircraft crew to detect any signals, their classification and identification are provided by the modern EW kit installed on board the aircraft. EW airborne equipment is installed in such a way as to provide full coverage of three to sixty degrees for ESM and other countermeasures, such as jamming of the enemy and cyber response.

The P-8I is capable of launching sonobuys to detect submarines using transceiver systems and hydrophones for listening. Sonobuys transmit signals to an airplane, with one P-8I deploying more than 100 sonobuys as part of a naval patrol operation.

The P-8I can also work with the main aviation group, performing tasks to protect the ship’s group and aircraft carrier from any type of underwater attack. The main goal is to find the enemy submarine before it can launch a torpedo towards the Indian ship.

Ctrl Enter
Noticed a mistake Highlight text and press. Ctrl + Enter
We are
Save your body! Overview of foreign products in the field of wearable protectionList of CIA-funded Russian public organizations
12 comments
Information
Dear reader, to leave comments on the publication, you must to register.