Ukrainian defense industry in anticipation of the "big driban" 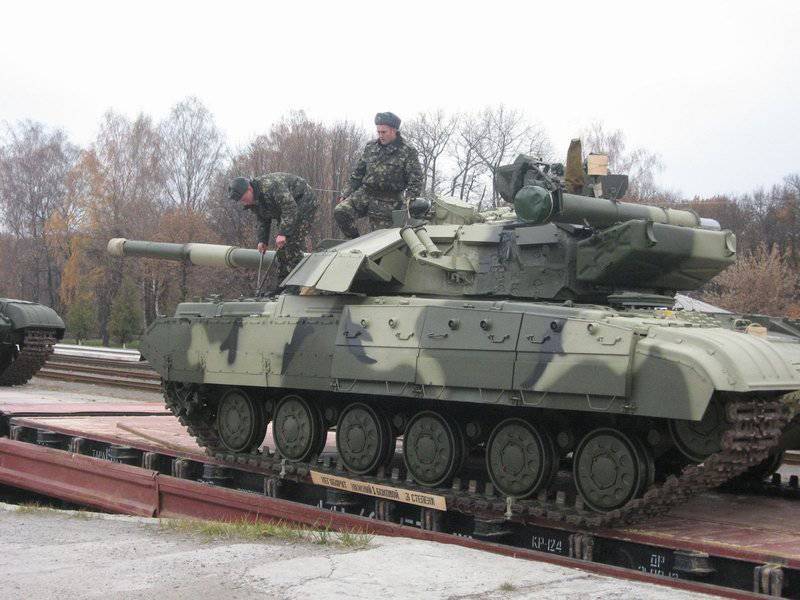 The main battle tank of Ukrainian production "Bulat". Photos from the official website of the Ministry of Defense of Ukraine

All manufacturers of weapons and military equipment in one concern.

Recently, in the Ukrainian military-industrial complex (MIC), strange things are happening. By taking steps to reform the defense industry of the country, which can be considered objectively useful and even necessary, the Ukrainian leadership at the same time demonstrates a very specific understanding of this sphere.

In particular, as you know, after Viktor Yanukovich came to power in Ukraine, the new leadership of the country without delay did what, under Leonid Kuchma and Viktor Yushchenko, remained in the gunsmiths dreams or was carried out only on paper — created a single structure represented by the Ukroboronprom state concern which unites the backbone of the defense industry complex, coordinates the activities of enterprises and is responsible for the centralized trading of their products.

The step is objectively necessary, given that for many years of independence, the Ukrainian defense industry was a certain set of enterprises and companies, united only by the output of military or dual-use products and scattered in subordination across various departments. In particular, at the time of Viktor Yanukovych's coming to power, the 161 enterprise belonged to the Ukrainian defense industry, of which the later disbanded Ministry of Industrial Policy included 76 enterprises, the Defense Ministry - 44, the State Property Fund - 14, the State Space Agency - 13, Ukrspecexport GC - XUMUM, Ukrspecexport GC , The State Service of Special Communications and Information Protection - 6, the Security Service of Ukraine - 4 and the Ministry of Internal Affairs - 3.

The de facto activity of these enterprises was not coordinated by anyone, and they resolved the question of survival on their own, without special government assistance. True, trying to rectify the situation, when he was President of Ukraine, Viktor Yushchenko tried to organize a National Agency for the Defense and even signed the relevant orders (on their basis, the decision of the National Security and Defense Council on 20 July 2007 was made to create this agency). But this initiative, like many other impulses of Yushchenko, remained at the level of declarations.

However, for Yushchenko, the creation of such a structure was not only and not so much a matter of defense development, as an attempt to solve a very piquant issue with financial flows that go through the defense industry (which is about $ 1 billion annually). After all, the management of these flows in the Ukrainian defense industry was carried out simultaneously by presidential decrees and decrees of the Cabinet, while the legislative base contained many gaps that allowed the manipulation of finances.

The problem, over which Yushchenko struggled unsuccessfully, was quickly and effectively solved by Yanukovych, creating the state-owned concern Ukroboronprom, which included 125 enterprises. Many Ukrainian experts saw in this step the irrepressible desire to control all financial flows in the Ukrainian economy demonstrated by the current Ukrainian government and in other areas. But it is also difficult to deny that this simple, seemingly, step was a serious breakthrough in the development of the Ukrainian defense industry.

At the same time, the work style of the new military-industrial complex leadership appointed by Yanukovych was puzzling. In particular, the universally demonstrated desire to remove various foreign intermediaries, without going into the details of specific contracts. The first light scandal (it did not cause a serious resonance in the country, obviously, only because not everyone understood its essence in Ukraine) was about the already legendary "Iraqi" contract for the supply of armored vehicles. According to Ukrainian media reports, the new OPK leadership attempted to remove the American intermediary firm from this contract. Given the fact that the financing of the contract in the context of the overall rearmament of the Iraqi army was carried out by the United States, Kiev’s demands to remove this intermediary initially looked silly.

The second oddity is that, in fulfilling the contracts concluded by the predecessors, the leadership of the defense industrial complex of these very predecessors criticized and criticizes everywhere: they say that nothing was done under the previous government, while we are making a real breakthrough in the arms and military equipment trade. In fact, the largest weapons contracts (in particular, for the supply of armored vehicles to Iraq and Thailand) were concluded under Yushchenko. But the current leaders of the Ukrainian defense industry, so far, alas, cannot boast of their own agreements comparable in volume.

But be that as it may, the gunsmiths stirred up the new rules of the game, according to which the defense industry - in particular, the largest manufacturers of weapons and military equipment in the country - began to be controlled by a single center. The confidence was added by the removal of Dmitry Salamatin from the head of Ukroboronprom and his appointment as Minister of Defense of Ukraine, because a solid state defense order is an old dream of Ukrainian arms manufacturers. Prior to this, it did not exceed $ 200 million a year, and the Ministry of Defense sought either to pay with old equipment or to get into debt altogether. A striking example is история with supplies of a dozen new Ukrainian tanks T-84, which were adopted by the Armed Forces of Ukraine. On the tenth anniversary of the independence of Ukraine in 2001, they were held during the grand military parade in Kiev. Later, the same tank company on brand new tanks served as a decoration for the 72nd separate mechanized brigade in the White Church for several years. And then the cars nevertheless returned to the manufacturer, since the Ministry of Defense was unable to pay for them.

Certain progress really went. As Dmitry Salamatin reported, in 2012, the defense budget provided for 2,343 billion hryvnias (293 million) for the development of weapons and military equipment, while 1,48 billion hryvnias (185 million) would be allocated by the state defense order. But only a part of these funds is allocated for the general fund of the Defense Ministry, that is, from the state budget, and part of it goes through a special fund, that is, at the expense of the funds that the army must earn by itself. Thus, it is still a big question how much the Ministry of Defense will be able to allocate for the purchase of weapons and military equipment until the end of the year.

And here on the agenda was the second question - the privatization of the Ukrainian defense industry. This problem in Ukraine has been discussed for a long time, but earlier everything ended exactly the same way as the story with the national defense industry agency: under Yushchenko, the Minister of Defense spoke about the coming privatization (then Anatoly Gritsenko), this issue was raised at meetings of the relevant parliamentary committee, analysts from the National Security and Defense Council of Ukraine (NSDC) were working on it. But in the case talk and died down.

Under the current government, Prime Minister Mykola Azarov was the first to declare defense privatization in August last year during a visit to the state enterprise Zaporozhye Machine-Building Design Bureau Progress that the privatization of defense-industrial enterprises of Ukraine was possible, but its conditions were to attract a strategic investor and preserve research and production potential . “Taking into account the influx of investments in this sector, privatization is a necessary thing ... We will look at those enterprises that will find a normal investor who will invest good money in renewal and modernization,” he stressed. At the same time, Azarov noted that if the company is of strategic importance for the economy of Ukraine, the government will with particular attention to analyze the feasibility of privatization.

OLIGARCHS DON'T STAND FOR THE COST

In this context, in Ukraine, at the end of June of this year, the appointment of Sergey Gromov, the head of Ukroboronprom, the former executive director of the Bulgarian rolling company Promet Steel, which is part of the Metinvest holding company, which is under the control of Ukrainian oligarch Rinat Akhmetov, was accepted. According to Ukrainian experts, as well as according to information from sources included in the "Ukroboronprom" companies, this step was made just in anticipation of the upcoming privatization.

And immediately after Gromov was appointed head of the Ukroboronprom, July 6, 2012, the Verkhovna Rada of Ukraine adopted the law regulating the issues of debt repayment and the development of enterprises of this state concern. This law with "Ukroboronprom", or rather, with its enterprises, written off all debts for natural gas, electric and thermal energy, water supply and drainage, as well as debts to the Pension Fund and state social funds in the total amount of 819 million hryvnia. We agree that it is difficult not to link this law that has emerged in parliament with talks about privatization.

Actually, the Ukrainian MIC needs privatization itself for a long time. Although, as world experience shows, a single holding company for the production and sale of weapons, which is in private hands, will focus on the export of weapons to the detriment of their production in the interests of national defense. Moreover - and this is the main thing - it is not clear which of the defense enterprises will be privatized, which will become private-public, and which will completely go into private hands. In their minds, such giants as monsters belonging to Ukroboronprom, like the State Enterprise “Plant named after VAMalyshev” or the state-owned enterprise “Kharkov Design Bureau of Engineering named after Morozov”, should belong to the state, and small enterprises (it’s worth remembering, for example, The curving repair factories of the Ministry of Defense, some of which in the last two years have been removed "from under the wing" of the military department, can also be privatized.

But hardly Ukrainian oligarchs, the same Akhmetov, for example, are particularly interested in "defense trifle." Considering how famously the Ukrainian parliament is working today in the interests of the oligarchs, there is a serious threat that the upcoming privatization will simply turn into a “big deriban” of the Ukrainian defense industry.

Ctrl Enter
Noticed oshЫbku Highlight text and press. Ctrl + Enter
We are
Even the most pro-Western Ukrainian politician Yushchenko understood the importance of dialogue with Russia.List of destroyed the largest and most high-tech enterprises
Military Reviewin Yandex News
Military Reviewin Google News
15 comments
Information
Dear reader, to leave comments on the publication, you must sign in.